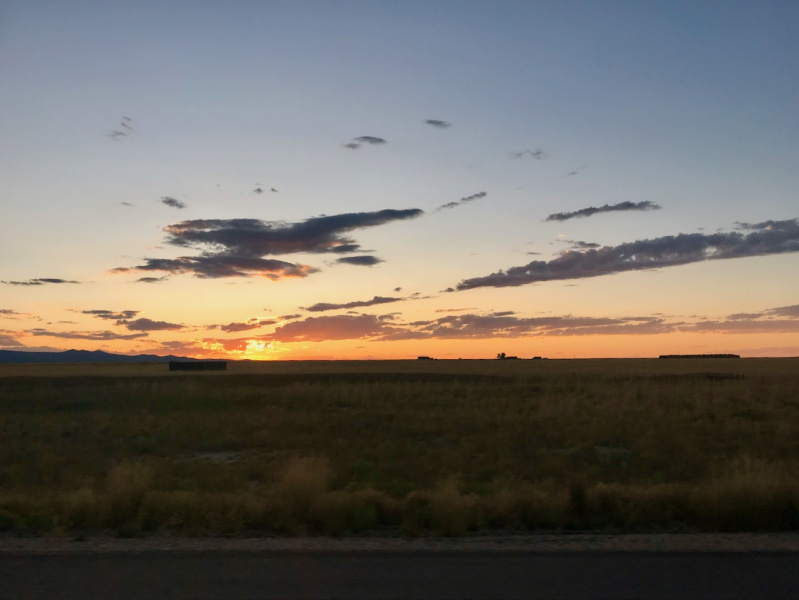 With the world seeming to be heading into chaos once again, I find myself searching for anything positive or cheering. Any good news, any happy ending, any ray of light in what feels like gathering darkness. I’m offering this love story in that vein, as a sign that goodness still exists, and miracles still happen. I’m not going to identify the lovers out of respect for one’s desire for privacy. You’ll probably guess the identity of the other; that’s okay.

Once upon a time, a writer quite reluctantly left her cozy home in the Southwest to travel north to Wyoming and teach at a retreat center. She grumbled as she drove, not because going to Wyoming wasn’t a joy, but because she was close to finishing a book project, and she didn’t want to leave the writing just then. But she had promised to lead a seminar for another friend who had to bow out, so our writer honored that commitment, if grumpily.

At sunset on her first day on the road, as she crossed the state line into Wyoming, the writer’s mood lifted. Looking at the wild valley around her, she realized that she needed to throw open the walls she had carefully built since her husband had died nearly eight years before. In particular, she needed to find a place to live with more open landscapes around her, and fewer people nearby, unlike the condo where she had lived for the past year.

When she curled up in her sleeping bag in her car that night, our writer surfed a real estate site on the internet, checking what was for sale in the area she was thinking of. Within minutes, she saw a house that looked just perfect for her–clearly in need of some love, but she wasn’t bothered by that. The asking price was over her budget, but she noticed the house had been on the market for months, so she figured she might be able to get it for less. Before she drifted off to sleep, she sent an email to her friend, a real estate agent, asking her opinion of the house and suggesting an appointment to view it when writer returned home the next month.

The next morning, our writer was feeling buoyant. As she drove through southern Wyoming’s sagebrush country with its long views and immense blue skies, she said out loud to the universe, “If I’m buying a house, it’s time to bring a dog back into my life. I’ll take the next one that comes along.”

She hadn’t had a dog since her Great Dane had died in 2007. Just over a year after the big grief of losing that beloved Big Dog came the brain cancer and caregiving years that had eventually set the writer on a solo path in life. For years after midwifing both her mother and her husband through their deaths she was simply too drained to be able to commit to any relationship, even the easy companionship of a dog.

“It’s finally time,” she said to herself as she drove toward distant mountain ranges, counting grazing pronghorn antelope and soaring golden eagles. And she felt good.

Late that afternoon she parked at the ranch where she was teaching. When she got out of her car and stretched her stiff back, a distinguished older dog, his red muzzle gone white, ambled across the dusty lot, sniffed her ankles, and presented himself for attention. She scratched his back at the base of his wagging stub tail, and then moved on to rub his ears. He groaned, sat on her feet, and looked up at her with big brown eyes.

“You’re a sweetie!” our writer said to the dog. “But you belong to someone already. You’re not mine.” He lifted his lips in a doggy grin, wagged his stub-tail harder, and ambled off.

A few hours later in the dining hall, the writer was chatting with some of the participants in her seminar when the dog’s person walked up and introduced himself: “I’m [we’ll call him “the guy”] and we almost met 30 years ago.” She turned to answer, and her heart stopped. The man wore his wildly curling dark-turned-silver hair in a stubby pony tail, his nicely muscled body in a plaid shirt and jeans. He tilted his head to look at her through the close-up lenses in his bifocals when she spoke, his brown eyes magnified and his body attentive, as if he was listening with his very cells. Plop! Her heart fell right at the toes of his dusty cowboy boots. She doesn’t remember now what she said, but she remembers the distinctive mixture of terror, annoyance–this is not my life plan!–and excitement she felt.

She went to sleep in her cozy cabin that night arguing with herself. She was quite happy with her solo existence, had no interest in a relationship, and had her life arranged comfortably, thank you very much. As she said the last out loud, our writer was quite sure she could hear the universe laughing.

The week went by, the writer spent her days writing, hiking, paddle-boarding, and riding the ranch’s horses. (The guy was involved with the horse program, which she told herself firmly had nothing to do with her choosing to ride–she simply missed the long-ago days when she had ridden often, both for her botany fieldwork and for pleasure on her own horses.) In the evenings, she taught her seminars, with the guy and his gentlemanly dog perched on a couch front and center in the room.

By the end of the week, our writer and the guy had managed to sit together at a few meals, but since they were both working, time for conversation was almost non-existent. Still, she had learned their lives had nearly intersected many times over the decades, they shared many mutual friends in the writing world, and many interests. He had a varied and intriguing background, including science fieldwork, publishing, horse-tending, and a new interest in the spiritual side of palliative care and hospice. Their conversations showed her that the guy was a wide reader and a deep thinker, with an interest in reconnecting humans with the wild, which they both thought was the source of sacredness and spirituality. He was just four months older than she was, with deep roots in the landscapes she called home too.

When they parted at the end of the week, she learned that he hugged as thoroughly as he listened. She drove off to spend several weeks working in a nearby national park, torn between excitement and terror. He spent the next month hunting in the high country of Colorado. They talked on the phone when they could, their long conversations ranging from what “home” meant to methods of dealing with invasive weeds, and from favorite musicians to what they had learned from other loves in their lives, to the age-old question of whether red chile is better than green chile. (That last is the only thing they disagreed on.)

That fall, the guy came to visit for a weekend so they could hear a writer they both knew read from her new book. They hiked, cooked, took walks, and talked. A lot.

Two nights stretched to four, and when the guy left, our writer surprised herself and him by saying, “I love you.” The words were a gift, she explained; he wasn’t required to respond at all. She just wanted him to know he was loved, whether or not he felt the same. He nodded. After he called her that night to say he had made it home safely, he called back. “I forgot to say something,” he said. “What?” “I love you.” Tears formed in her eyes. “It’s been hard for me to say my whole life,” he added. “But I’ll try to remember to say it every day.” She swiped at drops running down her cheeks. “Thank you,” she said. “I love you too.”

The writer and the guy are figuring out how to interweave their respective lives and to use this gift of unexpected love for good in the world. If we only listen to the news, these difficult times seem so short of goodness and love. But those qualities are all around us, and we all spread them every day. The truth is: love–not necessarily romantic love, but the genuine attachment we feel for each other, for other species, and for this living world as a whole–is what sustains us in and through hard times. Hence this story, which I offer as a ray of light and a reminder that love lives, thrives, and even surprises us even in or perhaps specially in, hard times.

Sometimes when she is falling asleep at night, snuggled close to the guy and the dog, our writer thinks she hears the universe laughing softly. And she reminds herself to be grateful for the miracle of love returning to her life. Also to be very specific in future when she asks the universe for anything. She only asked for a dog. She got the dog all right–plus his guy, and the guy’s horses. She wants to you know that while she is still surprised, even a bit stunned by the suddenness of the change in her carefully ordered life, she is not complaining. At all.