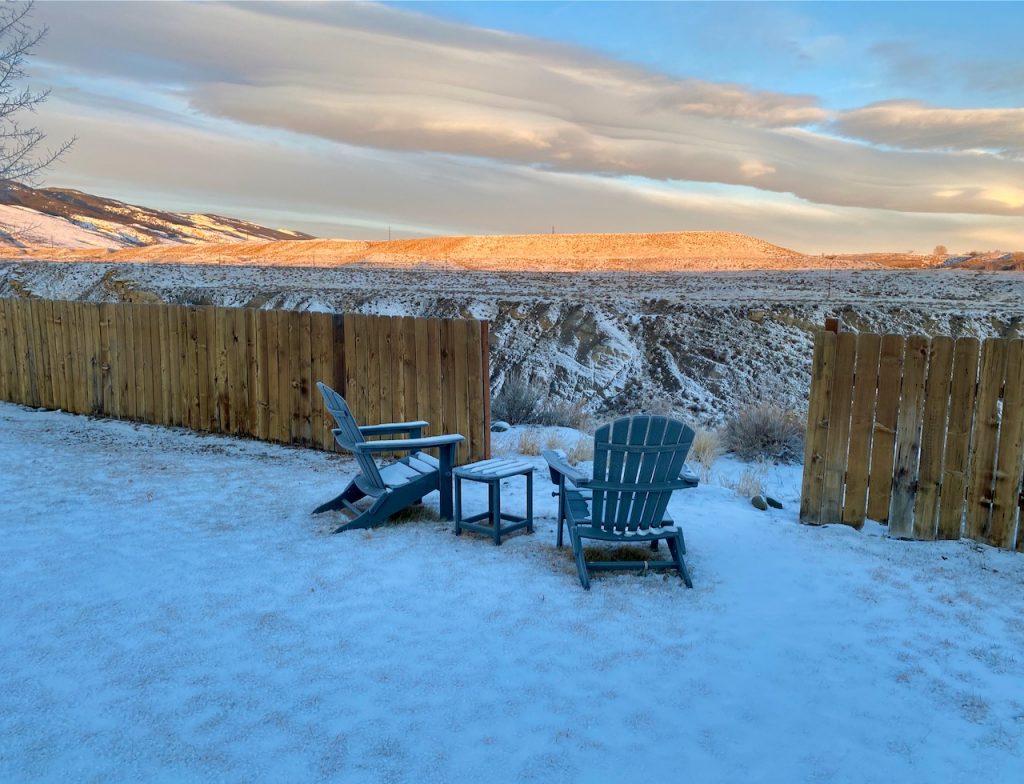 This year started out with events I would not have imagined six months ago: a house sale and a move. Last June, I followed my heart home to Wyoming’s sagebrush country, selling my Santa Fe house and moving to a house on “the rim,” as it’s called in Cody, above the Shoshone River. (Click the link at “a house” to see the “after” photos of the house. It did not look like that when I bought it!)

The Cody house needed some love–I’ve never bought one that didn’t–and it was too big for me. But it was in a great location, and I figured I would spend a few years fixing it up, and eventually trade it for a little cottage in the historic neighborhoods around downtown (which, of course, would need fixing up, because that’s how I roll–and how I earn an income from my real estate deals).

Only the universe had other ideas. Just before Thanksgiving, a stranger knocked on my door and asked if I would ever consider selling my house. I said I’d talk to my friend Yuliya Martsul, who is also one of the smartest real estate people I know, and see what she thought the place was worth. I showed them around and then I called Yuliya.

Six days later, I accepted an all-cash offer on the house at a price that paid me back for the work I had put into it, and covered my move. The closing date was–gulp!–mid-January.

Which gave me seven weeks to thoughtfully downsize, pack, search for a smaller place in Cody, and move. Piece of cake, right? After all, this would be my sixth move in ten years, so I’ve had plenty of practice.

“Right-sizing” from 2,200 square feet to something smaller and packing was the easy part. Finding another place to live in Cody proved impossible.

So I pivoted–flexibility is my middle name since I stumbled into this side-gig of buying unloved properties and re-storying them–I would move into the cottage in Montrose, in western Colorado, that I had bought for my winter writing retreat earlier last fall. (Have I confused you yet?)

My plan was simple: Winnow my stuff down to what would comfortably fit into the 672 square foot cottage–five rooms, counting the bathroom–and store what I couldn’t bear to part with. I’d look for a Cody place come spring, I thought, when the real estate market might be less insane.

Okay. Except that I would be moving from far northwestern Wyoming to far western Colorado, eleven hours south, in January, on a route that’s pretty much off the map for movers. Fortunately, Rick Cook of Cody’s Cook Moving & Storage, who has moved me twice before, figured out how to fit me and my not-very-much stuff on one of his trucks headed for Las Vegas, Nevada. (Thank you, Rick, and ace mover/driver Phil!)

The only hitch was that I would have to move January 7th, a week earlier than I had planned. Which gave me just six weeks to get ready. And to finish some projects in the house that I hadn’t bothered to with, thinking I had lots of time.

So between giving away some furniture and lots of books, downsizing my files, and packing, packing, packing, I was up on a ladder on my front porch replacing the tacky front porch lights with much cooler and more efficient ones that didn’t blind people coming up the walk. And finishing the cabinets in the kitchen, replacing a couple of really ugly bathroom faucets, and the like.

And I spent a week of that six in Montrose overseeing foundation work on my cottage, which had plumbing issues before I bought it, resulting in part of the beautiful stacked sandstone foundation under the oldest part of the cottage collapsing. Fixing that involved jacking up one side of the cottage and digging out the cellar, which fortunately I did not have to do myself!

It’s no wonder that I was a little insane by the time the week of January 7th rolled around. And wouldn’t you know, that was the week when Wyoming’s way-too-balmy-and-dry winter delivered a real northern Rockies blizzard, dropping a foot of much-needed but very inconvenient snow with sub-zero temperatures and howling winds. Fun stuff.

Thanks to last-minute help from my dear friends Connie and Jay Moody and the careful loading skills of Phil and his crew, my belongings were out of the house by closing on the afternoon of the 7th. My neighbor Bill helped me load my huge Christmas cactus, Arabella, into my truck, and Jay and Connie kindly housed me, the truck, and Arabella until the roads cleared enough for me to head south two days later.

Where the Guy welcomed me (and Arabella) into his comfortable farmhouse an hour’s drive from my cottage until Phil arrived with my stuff on a sunny Tuesday morning not quite two weeks ago.

Are you dizzy yet? I’ll save the details of the renovation I’ve done on the cottage in the past twelve days for another post.

Suffice it to say that I’m settled, my stuff is all out of boxes and stowed away, and I am happily exploring my new surroundings–I have a river to walk here, too–and I’m back to work on the new book. Whew!