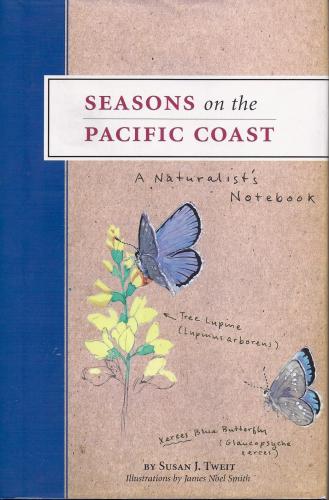 This fascinating new book… can be enjoyed as much from the armchair as from the field. –Seattle Times

There are as many definitions of the Pacific Coast region as there are people to define it. This book treats the two-thousand-mile stretch of the Pacific coast that I know best, from Vancouver Island, British Columbia, to Tijuana, Mexico. Water tells the story of this narrow belt where ocean meets land and fog blankets the landscape at least part of the year. Seawater physically shapes the landscape as surely as the waves crash against the shore. Water—either salt or fresh—clothes it with life, and the distribution of water—as rain or fog—separates this edge into regions as distinct as subcontinents.

… Edges are magical places, diverse and full of possibility. The edge where land meets sea long the Pacific coast is no exception. Unlike the largely low Atlantic coast, with its profusion of sheltered bays, estuaries, and inlets, the Pacific coast is by and large a cliff edge studded with headlands, points, and capes, and boasting only a handful of natural harbors along its wave-battered margin. …