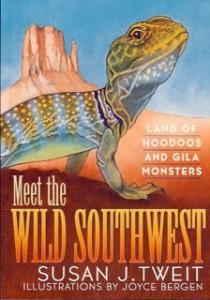 Desert ecology for kids, with activities

Tweit’s eclectic collection of natural-history facts and trivia provides a fascinating look at the American Southwest. … It has plenty of appeal and will be especially useful for families planning hikes or nature walks in the Southwest. –Amazon.com

Roadrunners and kangaroo rats are so well adapted to the extreme conditions of desert life that they have become symbols of the Southwest.

Roadrunners seem comical. They are long-legged and large, stretching almost 2 feet from the tip of their oversized beak to the end of their long tail. Their feathers are speckled black and white, and bare skin around their eyes is cartoonishly colored bright red and blue. They constantly raise and lower the crest atop their head like a signal flag. …

True to their name, roadrunners would rather run than fly They hunt on the run, sprinting as fast as 15 miles an hour to catch insects, lizards, scorpions, birds, and other small animals. If you see a roadrunner with something dangling from its beak, look closer. When they catch a lizard or snake too big to swallow whole, the excess dangles from their beak until they have room to swallow it! …