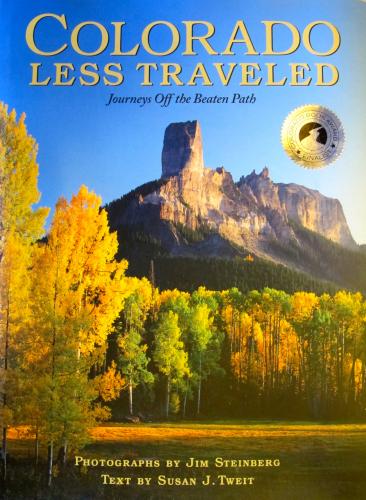 This striking book belongs in any library, public or private, that aspires to be complete on the subject of Colorado. — Bloomsbury Review

The name Colorado brings to mind the picture-postcard summits of Rocky Mountain National Park, Pikes Peak looming on the horizon, the dramatic faces of the Maroon Bells above Aspen. But Colorado isn’t just “purple mountain majesties.” It is also plains with expansive vistas, rocky foothills sliced by dark canyons, flat-topped plateaus in vivid colors, and the surprise of wide-open mountain parks.

Mountains, in fact, represent less than a quarter of the state. Approaching Colorado from the east, the first third of the landscape is the relatively level and largely treeless Great Plains. Next comes the abrupt rise of the foothills, with summits shouldering the peaks and slopes so steep that highways follow old Indian routes up the canyons. Higher still are the Rocky Mountains themselves, rising nearly two miles above the plains. Hidden within that chain of ranges are the miles-wide “parks,” which are arid valleys. Beyond the peaks and parks stretches a sere landscape shaped by thick layers of sandstone that inspire the name Colorado—from the Spanish for “colored” or “red”—for both the river and the state.

Photographer Jim Steinberg and his wife moved to Colorado from Oregon at the suggestion of friends who urged them to try the place for a year. Three decades later, they haven’t left yet, and Jim is still avidly exploring his adopted state. A natural curiosity about what might lie over the next hill, combined with a hint of contrariness that leads him to go where others do not, has sent Jim to places few others know. …