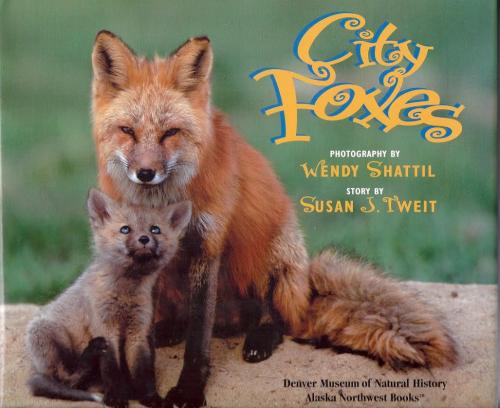 This engaging book describes the lives of six young red foxes born in a city cemetery. … The book is a beautiful blending of the talents of the author/naturalist and [the] first woman to be named Wildlife Photographer of the Year. — STARRED review, Science and Children

One cold March night six baby red foxes were born in the midst of a busy city. Their home was a den dug by their parents, a grayish father fox and a rust-red mother fox, in the lawn at one edge of a cemetery. The young foxes—called kits—were born helpless and with their eyes shut tight.

At first the kits simply nursed and slept. But after their eyes opened, they began to explore the den on wobbly legs. Soon they were playing, nibbling on each other or on their parents, and tumbling over each other.

One afternoon in early April when the kits were sleeping, the mother fox slipped out of the den. She had been inside with the kits for too long. The father stayed behind, snoozing and watching the kits. The mother stretched out in the sun near the den entrance and began to clean her fur. Lick, lick, lick went her tongue.

In the den, a baby fox woke, hungry. The kit searched around—no mother. The kit whined. Its mother answered from outside. The baby walked up the tunnel toward the sound, but stopped, blinded by the bright sun. The den was familiar. The world outside was not. Its mother called again. The kit paused. Its belly growled. …