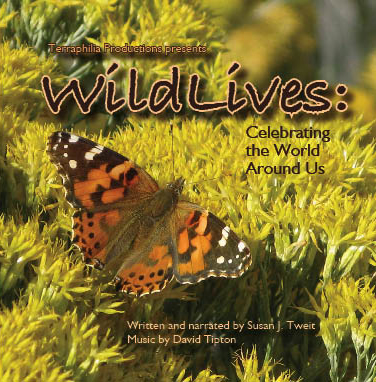 Hear a sample from Wildlives

For nearly seven years, I wrote and read “WildLives,” a weekly nature of life commentary on public radio in southern New Mexico and West Texas. Then my late husband and I moved home to a small town in the rural Southern Rockies, and with no public radio station nearby, the commentary became a long-running newspaper column.

I enjoyed writing the column, but I missed the magic of telling my stories. So Richard, an economist and sculptor who never met a design problem he couldn’t solve elegantly and efficiently, designed and built me a recording desk–it may be the world’s tiniest recording studio!–for my office. I started recording commentaries for our community radio station.

A few years later, just weeks from the end of my mom’s life, when she was in the hospital in a city a couple of hours away, I had the idea of collecting my favorite commentaries into a CD she could listen to whenever she missed the sound of my voice. As with so many good deeds, it was not quite as simple as I thought. It quickly morphed into a Big Deal, and ended up an actual commercial production. In the process I got me hooked on audio again. (And yes, I did finish it in time for my mom to listen to it!)