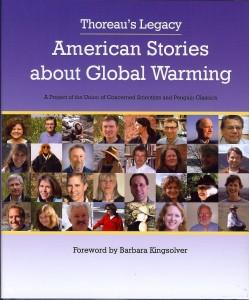 American’s relationship with our rich natural heritage has inspired many great writers, from Henry David Thoreau to Rachel Carson and E. O. Wilson. Their work has enhanced our appreciation of the world around us and galvanized support to preserve it for future generations. Now, with the threat of climate change, Thoreau’s Legacy brings together established writers and fresh voices to inspire us anew with personal stories and reflections on global warming.

From my essay, “Where Are the Butterflies?”:

For the past month my husband and I have hosted an accidental house guest. She (or he–we can’t tell at this stage) possesses an appetite so insatiable that we named her Gluttonous.

Her small size and single-minded quest for food allowed Gluttonous to remain unseen among the anise flowers I cut from our kitchen garden, even as she ate them. I spotted her munching on the bouquet several days later, balanced on multiple pairs of stubby legs–clearly a caterpillar, but one I didn’t recognize, dressed as she was in wrinkled black skin speckled with white and red dots.

The next morning, the empty black gauze of that new-shed skin swung from a branch. Nearby the insect herself–surely plumper already–chewed steadily in her dazzling new skin; the green and black stripes studded with orange dots identified her as an eastern black swallowtail. Watching this unexpected guest pull an anise blossom to her mouth and eat, I remembered a friend’s question: “Where are the butterflies this year?” ….