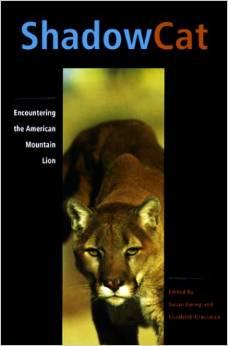 Devil cat. Ghost cat. Shadow cat. Cougar, puma, panther. The American mountain lion goes by many names, but it is a singular icon of untamed wilderness. … In this special gathering of twenty essays, such important voices as Elizabeth Marshall Thomas, Pam Houston, Rick Bass, Terry Tempest Williams, and David Quammen [and me!] thoughtfully and lyrically explore the nature history, encounters with humans, and controversial future of the mountain lion–a truly wild animal that has surprised us all with an ability to survive, despite its diminishing territory and our expanding urban sprawl.

From my essay, “Mountain Lion,” excerpted from my book Seasons in the Desert:

Early one August morning, a mountain lion was sighted in a suburb at the edge of my desert town. A homeowner called the police, who called the Game and Fish Department. By the time the officers arrived to search for it, all that remained were over-sized cat tracks and scared dogs. The lion itself had vanished up an arroyo toward the nearby mountains.

Mountain lions are the soul of the Southwest’s desert mountains and mesas. These big cats are secretive and rarely seen, but they make their presence known. The second largest cat in the Americas–only jaguars are larger–leones were once the most widespread wild cat in the Americas, ranging from the tip of South America to northwestern Canada, and from the Pacific Coast to the Atlantic. In North America, an all-out war on predators that began with European settlement has eliminated these graceful cats from much of the eastern part of their range. Only where large areas of rugged, relatively inaccessible country remain–including the desert regions–are mountain lions still plentiful.

American folklore is full of stories about leones: the blood-curdling screams that they supposedly utter just before they leap on their prey, their sensational ability to kill animals of any size, their penchant for tracking humans. In truth, these big cats are graceful and formidable hunters, but contrary to folklore, they hunt silently. …