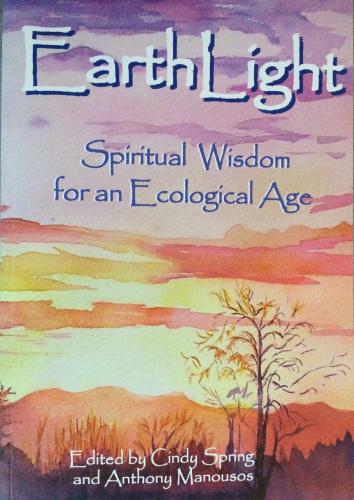 A quality paperback of approximately 350 pages, the book is organized by sections based on the EarthLight Principles that appeared in issue #53. In addition to the prose, poetry, and artwork that make up the majority of the book, it includes a history of EarthLight and its editors, a brief index, and a reprint of the Earth Charter: Values and Principles for a Sustainable Future

From my essay, “Picking Up Roadkill”:

“\Down the highway the other day, my husband and I spotted the humped form of a dead animal straddling the double yellow line. “Do you want me to stop?” he asked.

‘”Yes,” I said, “please.” He turned the truck around and parked on the shoulder. I hopped out, waited for a break in the traffic, then ran into the road.

“It’s a porcupine,” I said, returning and yanking open the rear door to dig for the folding shovel, “the biggest one I’ve ever seen.”

It took both of us, one pulling, one pushing, to scoot that porcupine off the road. As we laid it in the grass on the verge, I admired its massive size–it must have weighed 40 pounds–and its profusion of golden quills. Then we hopped back into the truck and headed on our way.

I’ve been picking up roadkill for almost two decades now, since a wildlife biologist I used to work with started me on the habit. “If you move them off the road,” he told me after picking up and carrying off a fresh jackrabbit carcass, “they don’t go to waste, and it keeps the scavengers that feed on them from getting hit.” It made sense, so I started picking up roadkill too.” ….