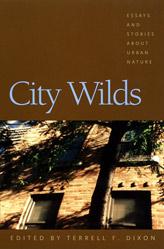 Essays and Stories about Urban Nature

Celebrating the natural diversity of our cities

The assumptions we make about nature writing too often lead us to see it only as a literature about wilderness or rural areas. This anthology broadens our awareness of American nature writing by featuring the flora, fauna, geology, and climate that enrich and shape urban life. Set in neither pristine nor exotic environs, these stories and essays take us to rivers, parks, vacant lots, lakes, gardens, and zoos as they convey nature’s rich disregard of city limits signs.

With writings by women and men from cities in all regions of the country and from different ethnic traditions, the anthology reflects the geographic differences and multicultural makeup of our cities. Works by well-known and emerging contemporary writers are included as well as pieces from important twentieth-century urban nature writers.

Excerpt from my book, Pieces of Light:

Today is the first day of fall–last night was the autumnal equinox. The nights and days are now about equal length, but soon the days will be shorter. The year is winding towards the long cold nights of winter. Autumn is a season of transition, between summer, the season of abundant and exuberant life, and winter, the quiet season when much of life is dormant, waiting for the earth to move closer to the sun again and the days to lengthen. Hormones direct the rituals of change: leaves on maples, cottonwoods, oaks, and other deciduous trees turn brilliant, gradually lose their color, and finally drop; birds from hawks to hummingbirds, some animals, and even fragile monarch butterflies migrate to wintering areas; raccoons, skunks, mice and other animals and insects prepare to hole up for the winter; the pace of human lives slows too, we succumb to melancholia more frequently, we sleep longer hours…. Even fall weather is in transition: gusty, strong winds; days running the gamut from summer’s heat to winter’s snapping cold; precipitation from rain to sleet to snow. Rarely is the weather forecast the same for two successive fall days. ….

The study of astronomy began with the need to chart the cycles of the sun and moon in order to predict the times of the equinoxes and solstices. It has only been in the rational era of modern science, with its emphasis on logic instead of emotion, that we have lost interest in celebrating the solar rhythm. Perhaps that will change. If the earth really is a giant self-regulating organism as some theories now suggest, then the solar cycle regulates the beat of its life. Today, after the autumnal equinox, the beat is beginning to slow in preparation for winter.