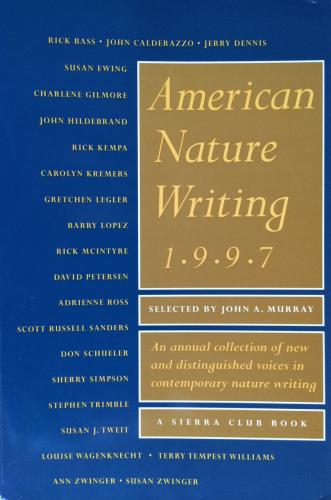 Edited by John A. Murray

The finest pieces of nature writing from 1997 presents 22 rich and varied selections from such celebrated nature writers as Barry Lopez, Terry Tempest Williams and Rick Bass. (And me!)

From my essay “Weeds,” excerpted from Barren, Wild and Worthless, my memoir of living in the Chihuahuan Desert:

On the afternoon of Wednesday, July 1, 1992, the Doña Ana County Sheriff’s Office responded to the report of a body in the desert near War Road on the Texas-New Mexico boarder some thirty miles southeast of Las Cruces. Sheriff’s officers arriving at the scene found the body of an older, dark-skinned Latino man, about 5 foot 2 inches tall with salt-and-pepper, shoulder-length hair. He was lying face down in the dirt near the signs marking the state boundary, just eighteen inches over the line in New Mexico. Despite the hundred-plus-degree heat of that summer afternoon, he was dressed in several layers of clothing: a blue sweater patterned with stylized birds and colorful stripes on top, another sweater under that, faded blue button-fly Levi’s and a pair of gold corduroy jeans underneath, black socks, and black leather tennis shoes tied with baling wire.

He had been there a while. Employees driving War Road to work at White Sands Missile Range had first spotted the man nearby five days before on Friday, June 26. He was carrying a gallon jug of water, a white straw cowboy hat protecting his head from the merciless sun. According to one witness, he as last seen alive sitting on the ground, propped up against the state boundary signposts “looking sick,” still wearing the cowboy hat, still carrying the plastic jug, on Monday, June 29. By Wednesday afternoon, he was dead, his sun-blackened body bloated and stinking, his discarded water jug empty. He had died of thirst. ….