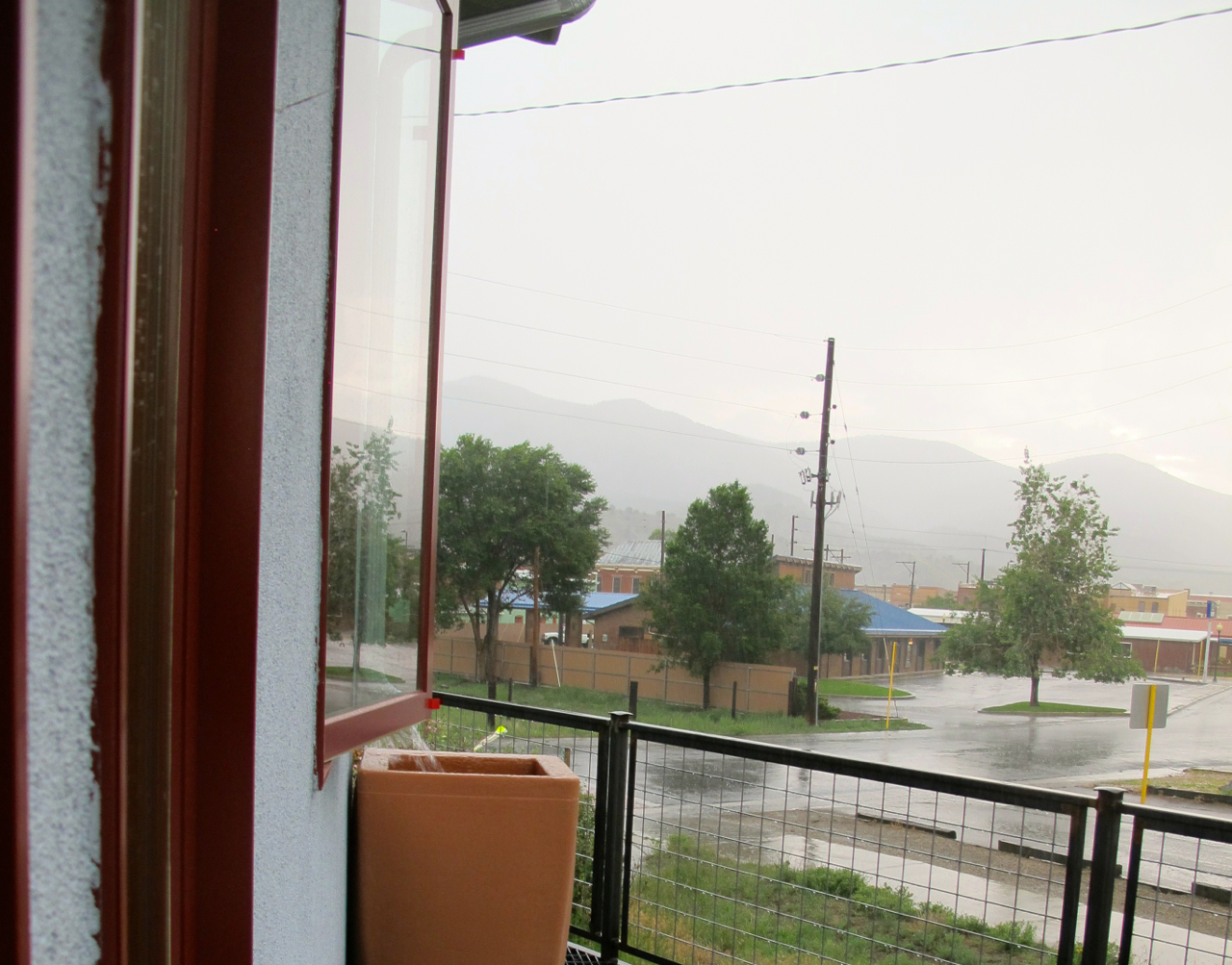 The first wave of rain goes by….

At about five-thirty this evening, a thunderstorm “walked” slowly down the valley on “legs of lightning,” as the Navajo say. Jagged flashes struck the hills above town. Thunder boomed.

The rain started hard and went gentle for a while. The wind spun around from northwest to southwest, the rain began to pound down again. 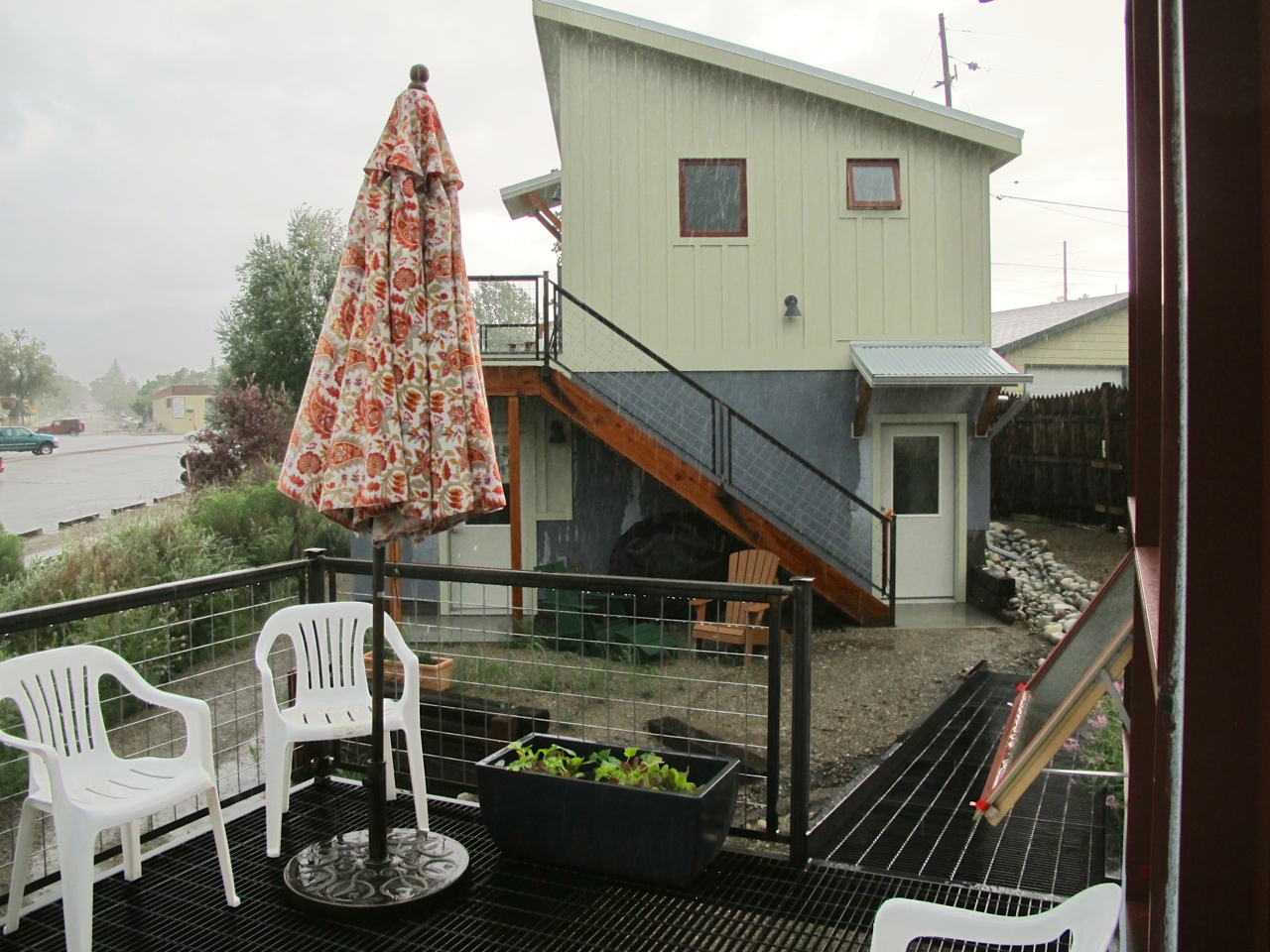 It’s pouring now, and the wind is gusting hard.

By the time the storm finally walked itself down the canyon about 50 minutes later accompanied by thunder’s tympani, the air temperature had plummeted from 80 degrees F to 52 degrees. 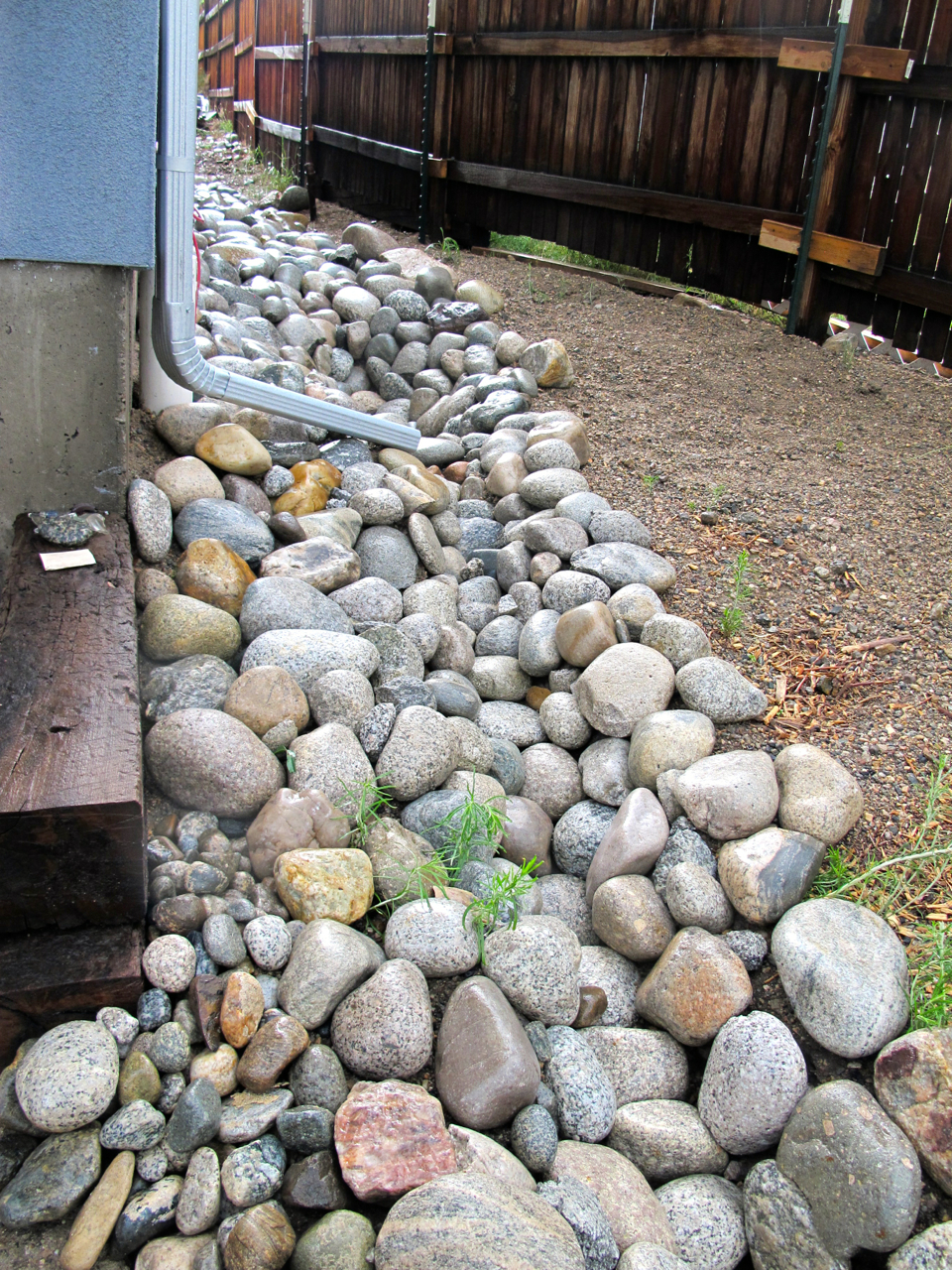 The spash zone and dry streambed, wet but not flooding.

The gutters dripped, my dry stream bed carried the water safely down the slope without eroding gullies just the way it was supposed to, and nothing seemed to have suffered from the gusts and pounding rain.

Except the hummingbirds. They were so desperate to tank up on the high-calorie food they need to survive the cold and wet that they began competing for the hummingbird feeder before the rain even stopped.

The air-space around the feeder vibrated with zooming bodies, accompanied by a cacophony of trilling and chattering as hummers jockeyed for the nectar. 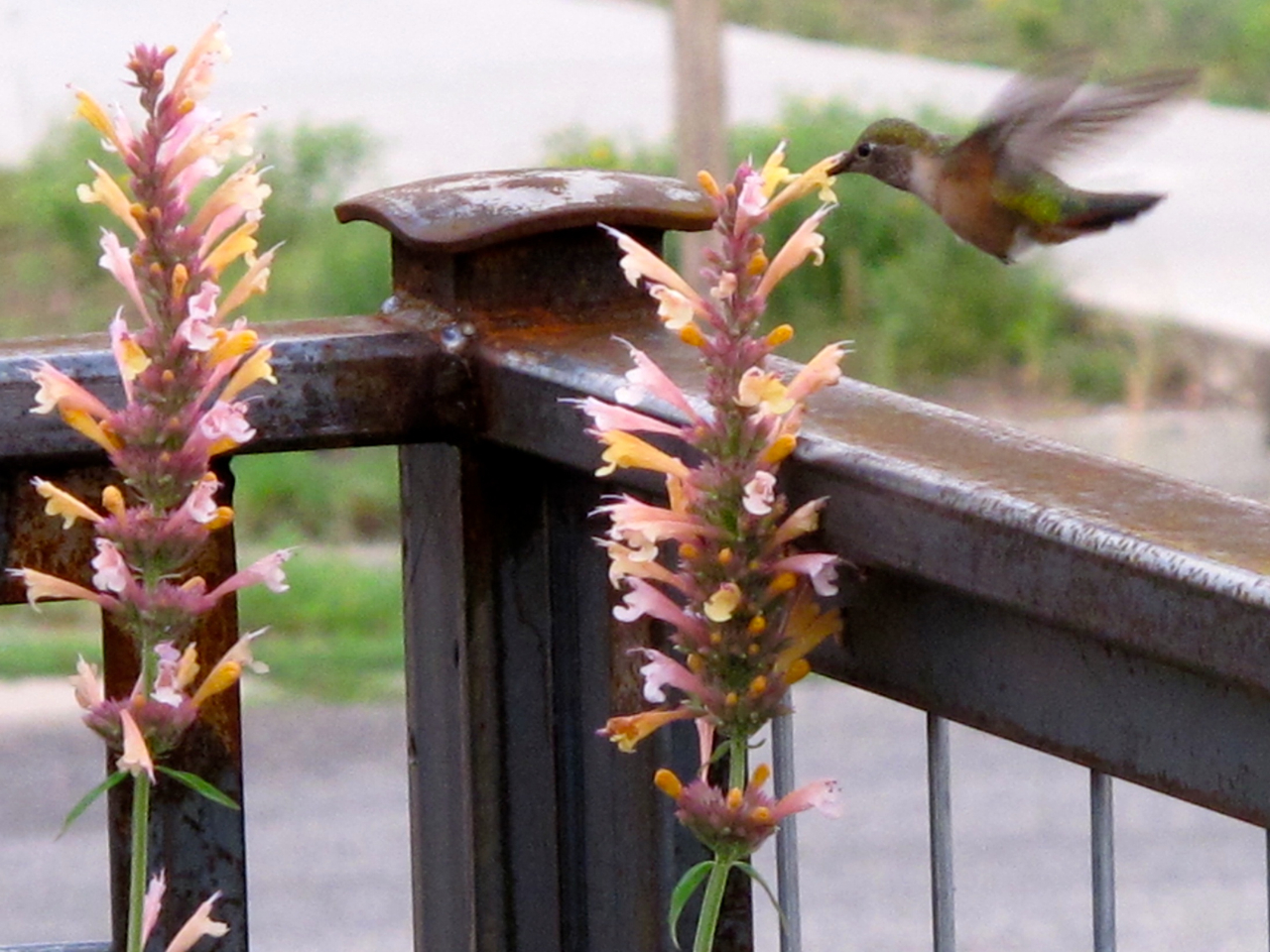 One wet and fluffed up little hummer, a female Broad-tail I think from the buffy flanks, feeding from the Agastache (the variety is ‘Acapulco Sunset’).

As I watched the aerial dogfights and chases, I noticed two hummingbirds quietly hovering near the pollinator container garden—two large pots planted with nectar-bearing flowers—at the entrance to the deck, just steps from the feeder.

While a gorgeous cinnamon male Rufous Hummingbird and a brilliant emerald green male Broad-tailed Hummingbird (they of the trilling wings) battled it out over the feeder, these two hummers silently worked their way from flower to flower of the Agastache in the container garden, sucking nectar. 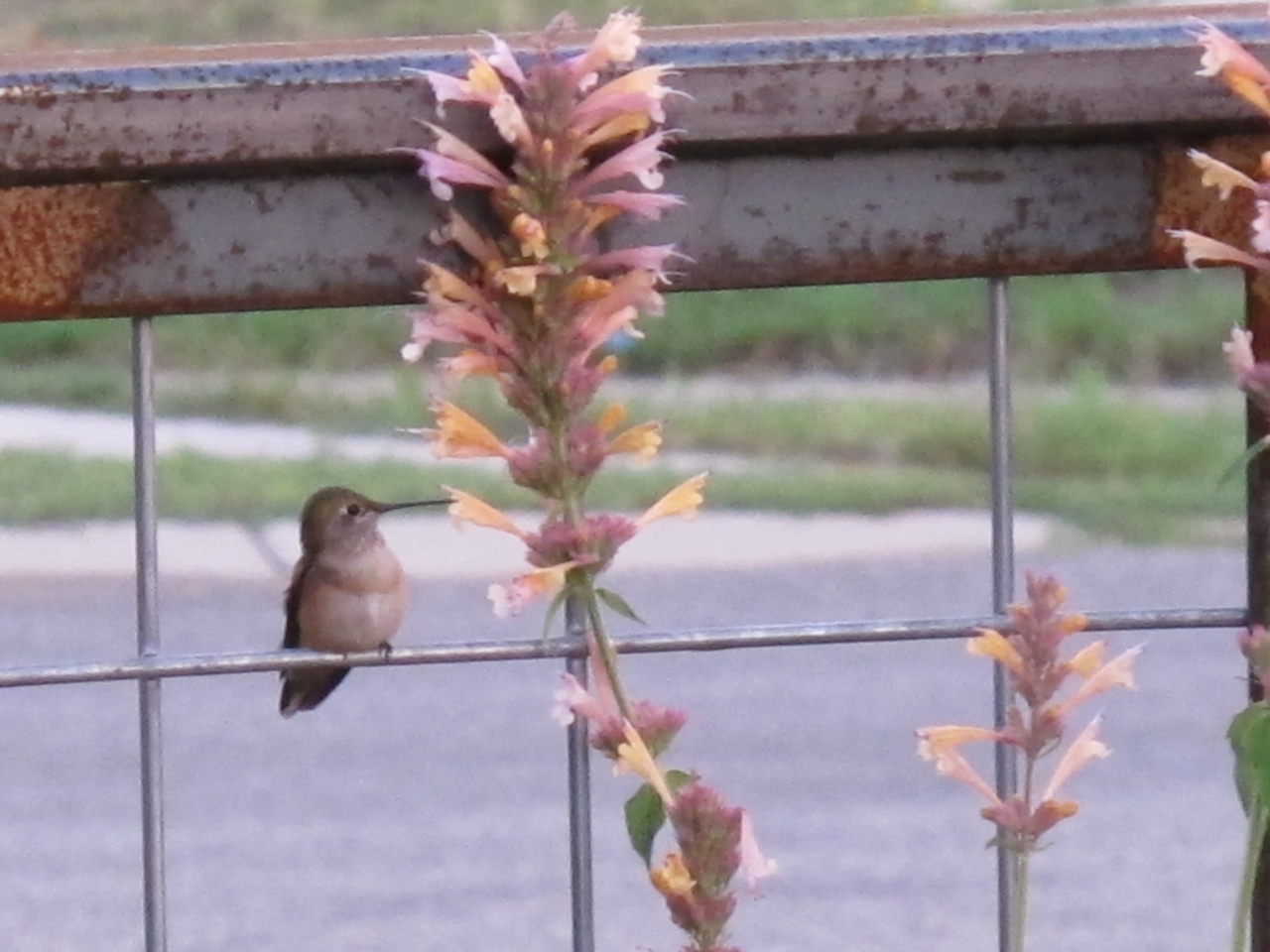 This is much easier than hovering….

After the larger of the two zoomed away, the smaller one quit hovering and simply perched on the wire grid railing right next to the spikes of Agastache flowers, sticking his or her short, slender beak right into the nearest flower to sip nectar.

For the next ten minutes the little one fed while perched, checking out each flower within reach, while about five male hummingbirds competed for the feeder, sometimes zipping within a foot of her or his perch. 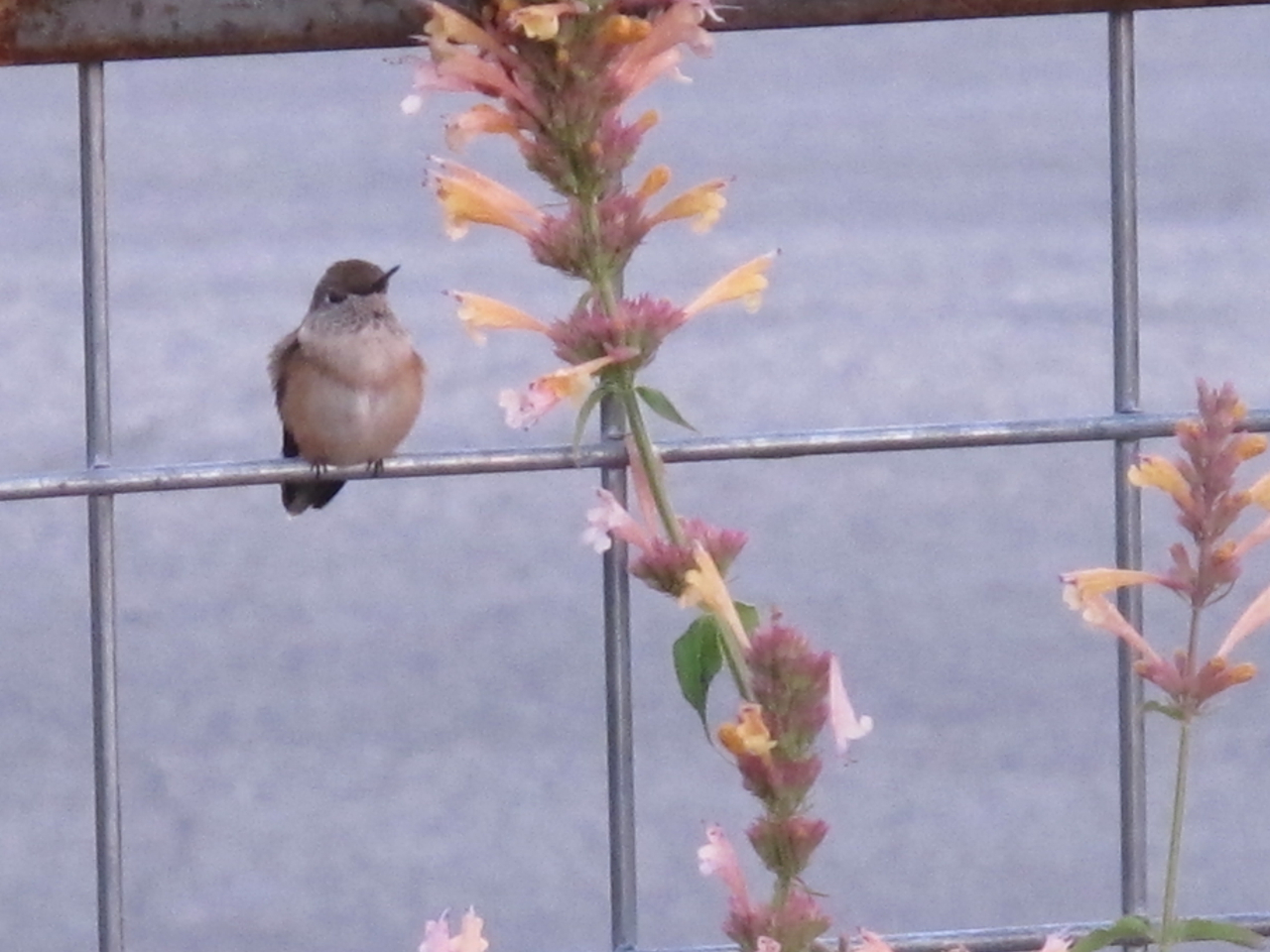 The little one watched them, and moved from perch to perch around the flower spikes, but didn’t leave its easy nectar source—ideal hummingbird habitat.

The bird’s throat had the very light striping typical of young born that summer. Its diminutive size, short bill, squared-off tail and behavior—perching while feeding—is a clue to the species as well. 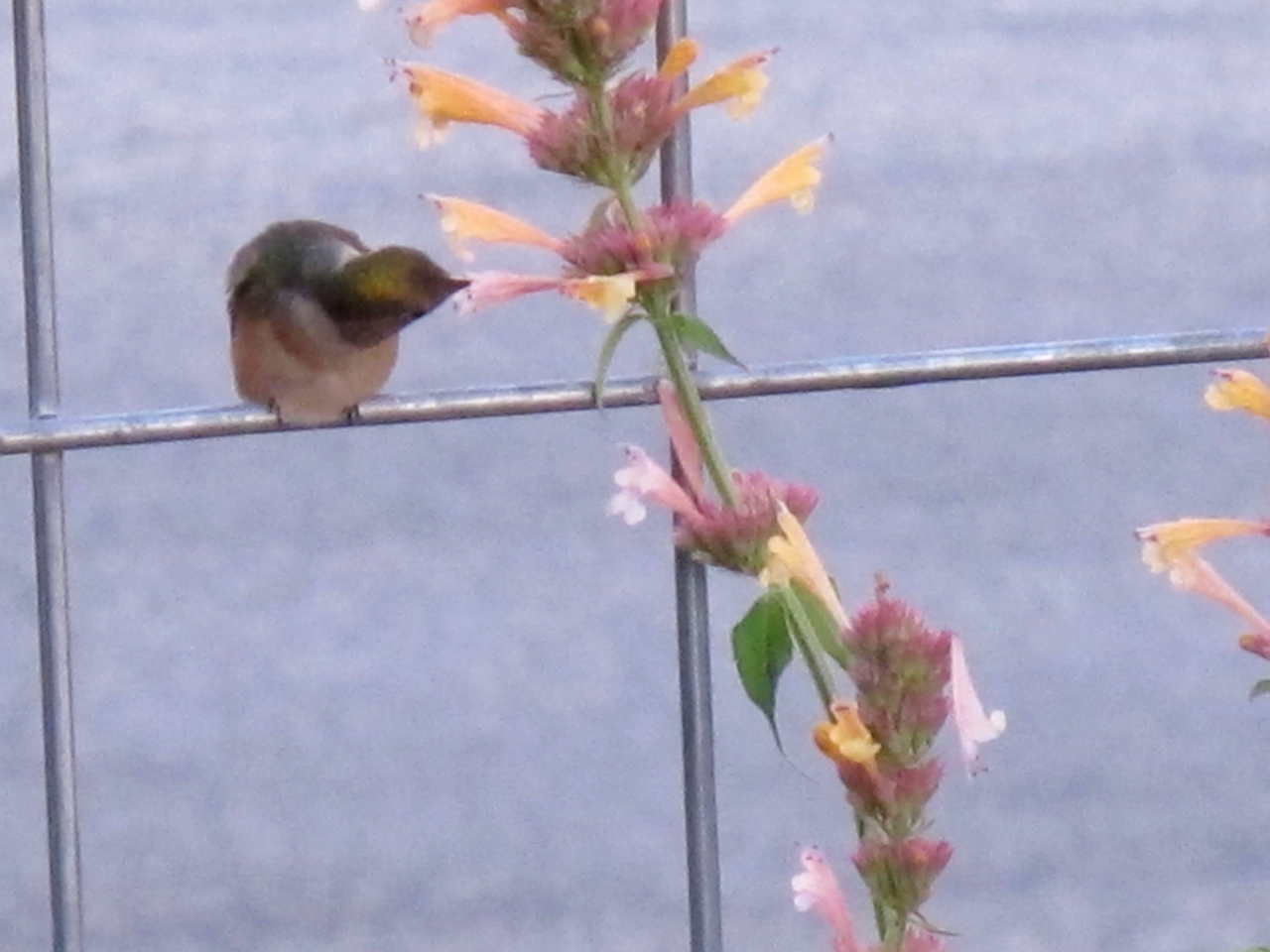 If I can just get my tongue in far enough….

I’m pretty sure it was Calliope Hummingbird, the smallest of the four hummingbird species that pass through the south-central Rockies in summer. Calliopes stretch just three-and-a-quarter inches long, weigh a single ounce, and fly all the way to Central Mexico for the winter!

I’ve watched adult male Calliopes with their distinctive striped red gorget perch right next to a flower to feed instead of hovering. I’ve never seen any of the bigger hummer species behave that way.

The little Calliope reminded me of why I plant a variety of nectar-bearing plants that attract hummingbirds: when there’s a crowd, not everyone can compete for the feeder. 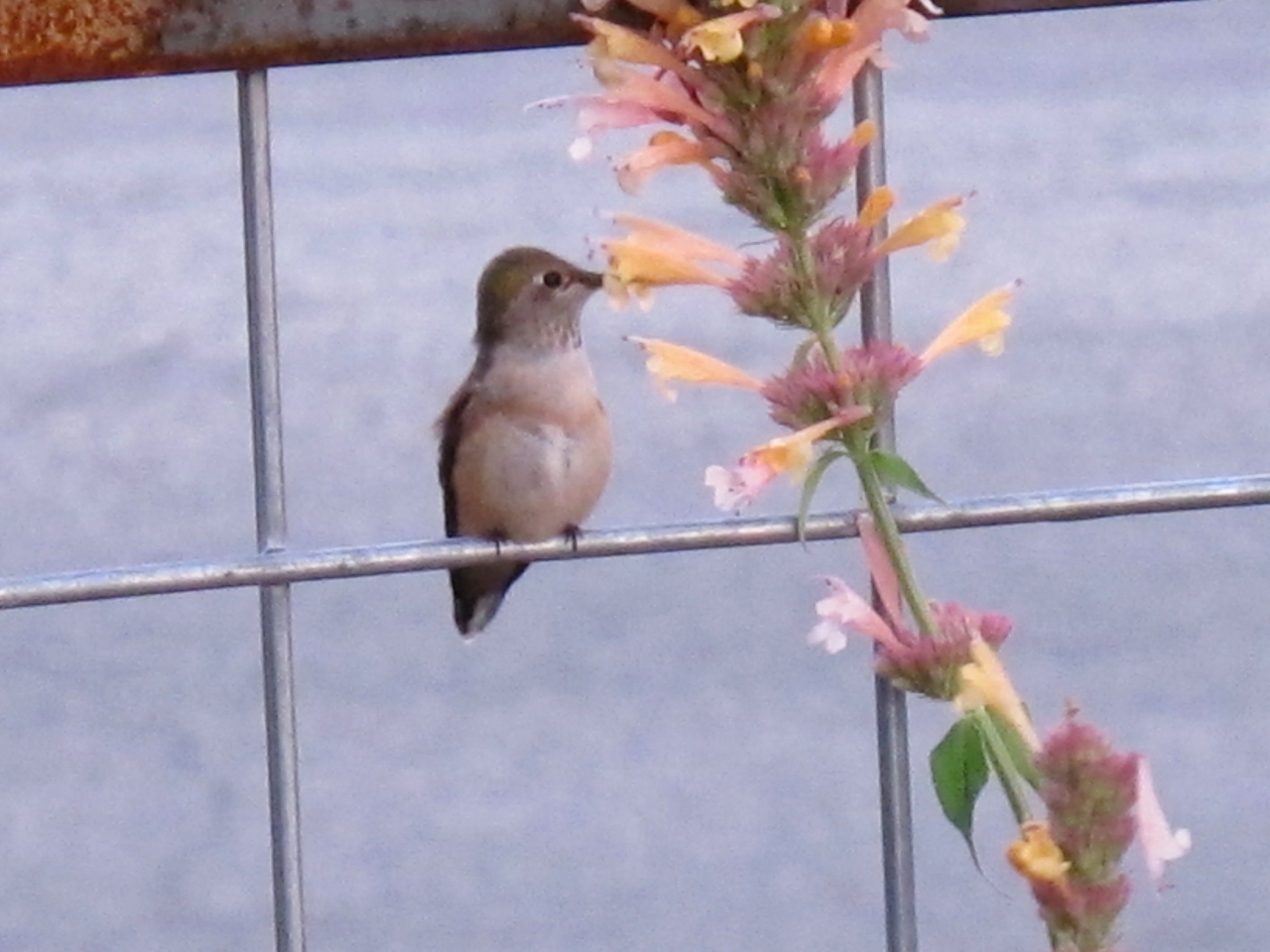 Ah…. Just the energy I needed!

She or he also reminded me of how little it takes to provide hummingbird habitat: one single Agastache plant in a pot on the deck gave the little one plenty of nectar. I’m glad the flowers were there to help this little one survive the storm.

I hope this Calliope survives migration and returns next summer to perch on my deck railing and drink from the flowers I plant for just this reason in the big blue-glazed pot on my front deck. 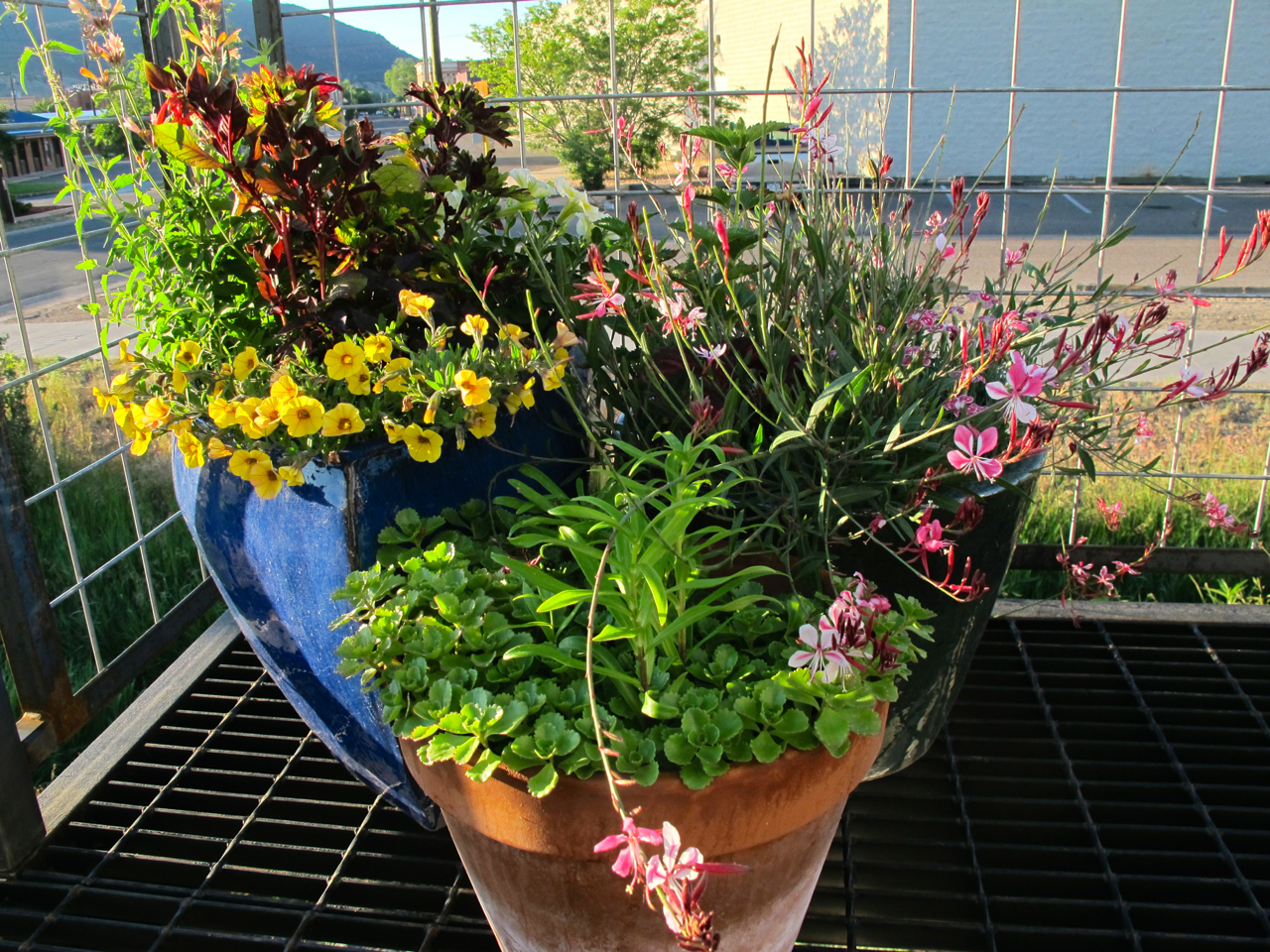