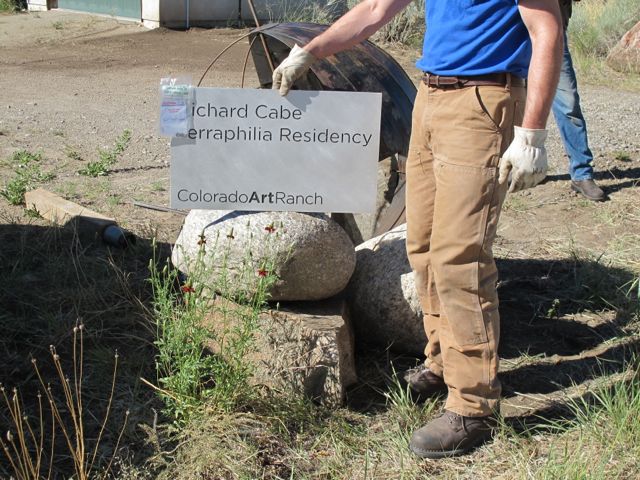 We’ve got a full slate of residents lined up for the rest of the year, and we’re looking ahead to next year. The program represents the closing of a circle of sorts for me: Richard and I were headed to a remote cabin in the mountains of Southwest Colorado for our own joint artist-writer residency when he began seeing birds, harbingers of his brain cancer. We ended up going home instead. Offering that kind of “time-out” for other artists and writers to nurture their creativity was the best way I could imagine to honor Richard’s life and work.

Richard’s historic studio the winter after we bought it, before we began fixing it up and built our house next door.

While Grant got the program up and going, I began coordinating completion of the renovations that Richard began to restore his beautiful but once-very-neglected studio building, preparing it to serve as work and workshop space for the visiting artists and writers. The building has a long history: it began life as a millwork shop for a lumber company 110 years ago when its machinery was powered by a steam engine, and a mainline railroad ran just across the creek. 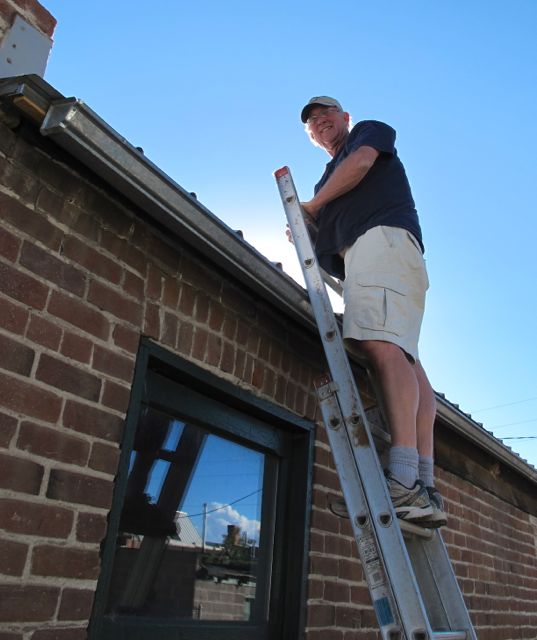 Renovating a building with so many decades of experience requires care, thought, and flexibility; each step reveals something unexpected. Big thanks to Grant Pound for organizing volunteer work days, and to Bob Spencer, who dusted off his building contractor skills to as volunteer project manager.

On the first work-day, nearly two dozen people, many of them Richard’s fellow artists, turned out to clean up, clear out, and organize a building that had become a mite, well, cluttered, in Richard’s last year with brain cancer. By the end of the day, the space clean and welcoming, the gutter on the alley side was restored, and the back gate was fixed. I love this town!

That cleared the stage for renovation, including expanding the original cold-water bathroom (which meant cutting a trench in the decades-old concrete floor), relocating a wall built 80 years before with original rough-cut lumber, and some rewiring. That work was done by talented tradespeople who appreciate old buildings, including Bill Adams and his crew at A-1 Construction, Dave Hartman and sons from Alpha Plumbing, drywaller Mark Shupp, and electrician George Hardgrave. 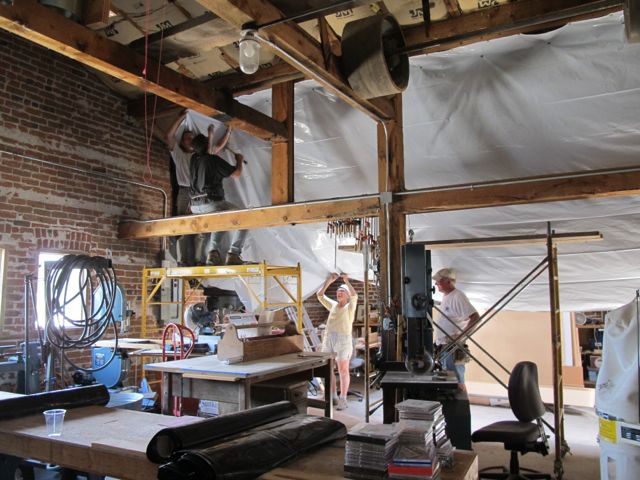 Then came the second volunteer push with the aim of installing a new membrane ceiling and painting the new bathroom and office walls. Over this past hot weekend, the ceiling crew—Bob Spencer, Grand Pound, Ed Berg, and John Graham—wrestled ten-foot-wide, hundred-foot-long rolls of white membrane into place, which involved moving workbenches, woodworking machines, chop-saw tables and all manner of other obstructions, and erecting and climbing a variety of ladders and scaffolding to reach the sweltering peak of the ceiling, and then nailing membrane overhead. (Thanks to Dave Nelson of Ploughboy Local Market for scaffolding and tall step-ladders, and to helicopter pilot and webmaster Bill LeRoy for caulking that leaking skylight.)

The painting crew, including Roberta Smith (who also donated paint), Bev Gray, and Sue Mills transformed the newly plastered walls. (I was painting too, so I didn’t get any photos.) 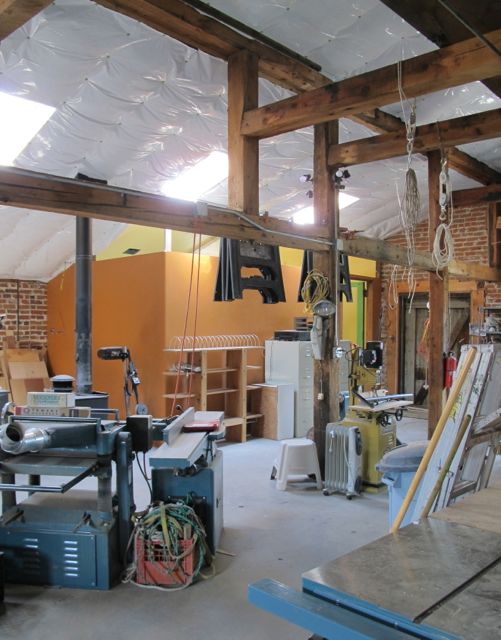 What a difference a ceiling and the newly painted walls make.

The studio is now a brighter, lighter and cooler place with the new ceiling membrane securely fastened to the old roof beams, and the office and bathroom ready for fixtures and final wiring. Whew!

This is an uncertain time for arts programs, for the world as a whole, and for many of us personally. It is not clear how long we’ll be able to continue the Terraphilia Residency program. But we’ve got something important going, and we’re riding that momentum.

I am honored and humbled by all of you who have invested time and skills and resources in this project. Thank you for your support and love. Blessings!