My morning writing ritual includes a cup of hot chocolate, something that you might consider decadent unless you know that caffeine, even in the tiny amounts contained in decaf coffee or tea makes me sick. To stay healthy, I avoid all of those caffeinated drinks  I used to love. Instead, I drink hot chocolate.

It turns out that my hot chocolate habit is healthier than you might think. As an article in Mother Nature Network reports, Cornell University researchers studying the anti-oxidant levels in chocolate found that hot cocoa is a great source of antioxidants. 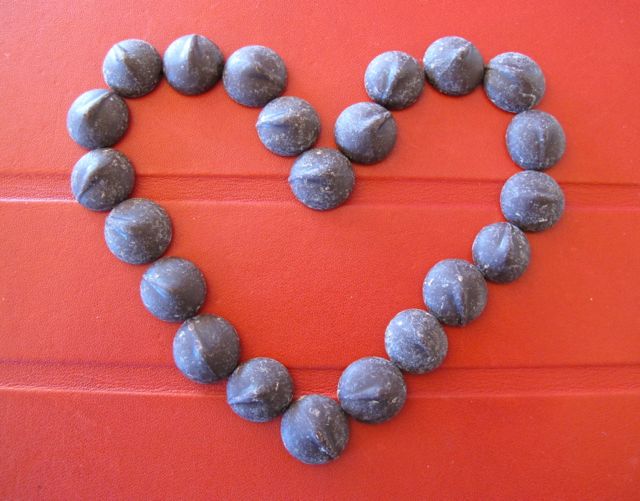 Chocolate is heart-healthy; cocoa powder has even more benefits than the solid form

And heating the cocoa releases more of those cancer-fighting, age-fighting, free-radical-neutralizing antioxidants, says Professor Chan Yong Lee, the lead author of the study.

Don’t buy commercial hot chocolate mix though. It’s full of unhealthy corn syrup in various incarnations and saturated fats. And it’s expensive on a per-serving basis. Instead, make your own healthy (and cocoa-rich) mix in bulk. It’s ridiculously simple. (There are only two ingredients!)

Mix the sugar with the cocoa powder until it is combined. (Add more cocoa if you like a richer mix, more sugar if you prefer sweeter hot chocolate.) Store in an air-tight jar or tin. Add two to three heaping teaspoons to a cup of hot milk. (Use skim or lowfat milk to keep the fat content from counteracting the health benefits.) Stir and enjoy!

As you sip your healthy hot chocolate, thank the Mayans, who invented chocolate drinks many millennia ago. (Cacao beans are native to South America. They’re one of the Americas’ great native crops, along with chiles, corn, beans and squash.)

GIFT IT: Put the mix in a pretty jar, add instructions for making hot chocolate on a hand-made card, and give it to someone you love for Valentine’s Day. 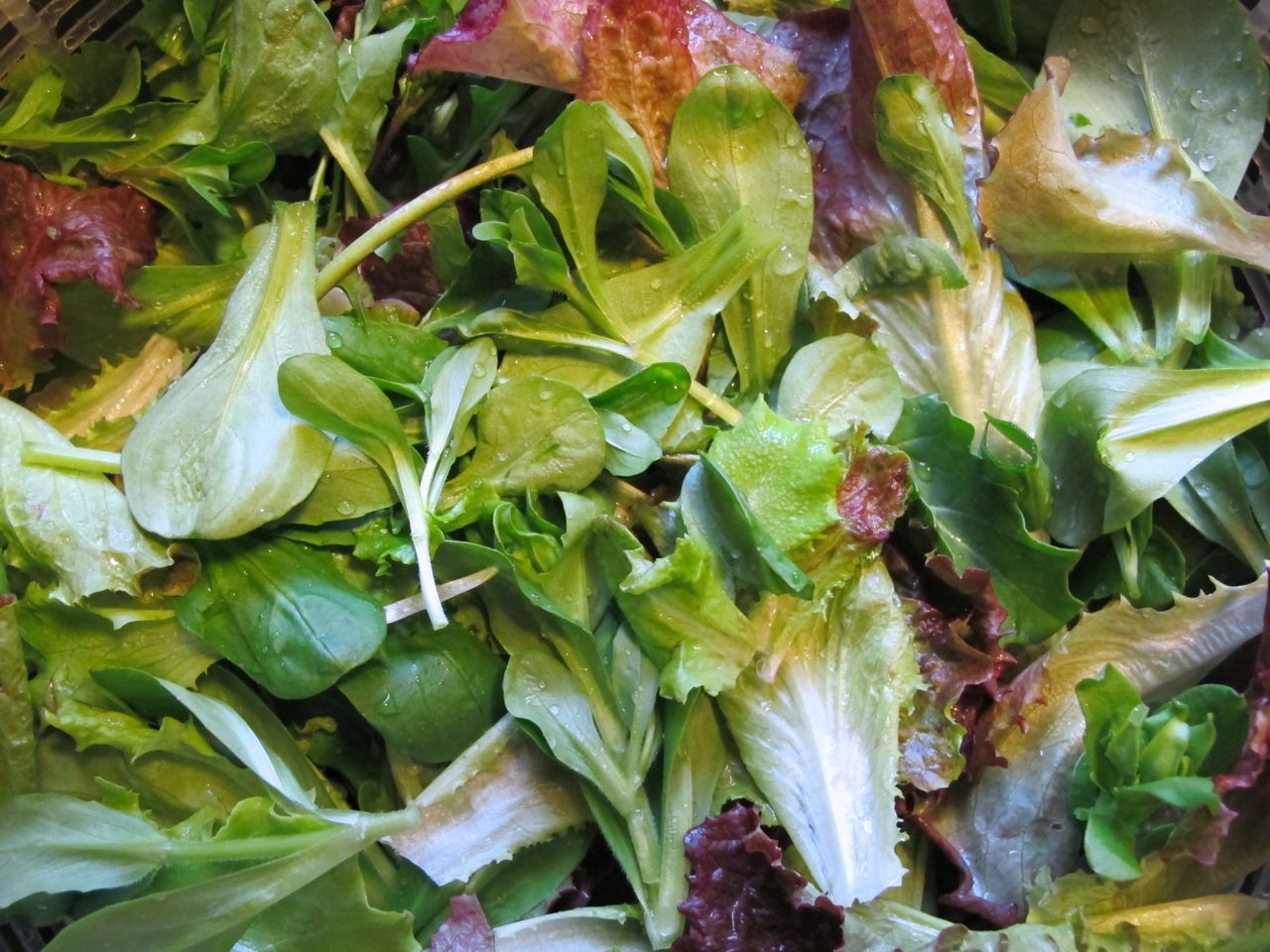 Monday evening at about six, in a break in my long work day, I went out to the kitchen garden, un-clipped one side of the row cover fabric on the raised bed that holds my winter planting of spinach and mesclun and did a quick thinning and harvest. So quick, in fact, that I didn’t stop to shoot a photo of the growing tapestry of greens and reds.

I yanked crowded mache, pinched back arugula, and thinned ruffled red and green lettuces, pulling up small plants, cutting off the roots with my garden scissors, putting the leaves in my garden basket and tossing the roots to the compost pile. In ten minutes, I had a basketful of fresh greens, the row covers were clipped tightly bed over the bed and the wind was rising.

I carried my harvest inside, weighed it (3/4 of a pound), dumped the greens into the sink, washed them in cold water, and spun them in the salad spinner. 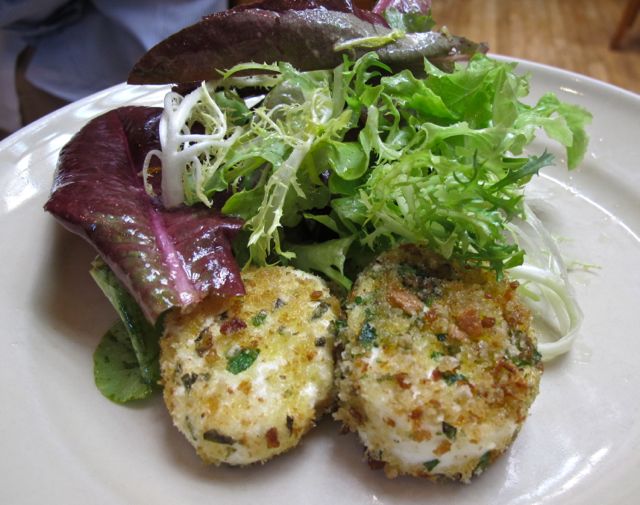 Organic greens, fresh from the garden—yum!

Then I made myself a simple green salad, my favorite spring meal:

And went back to work on a landscaping-for-wildlife project that will launch later this spring. I worked until bedtime, did yoga, brushed my teeth, washed and creamed my face, and fell into bed. (That’s my life: sleep, yoga, eat, work–either writing, consulting, or carpentry, take a walk, eat, yoga, sleep, repeat….) 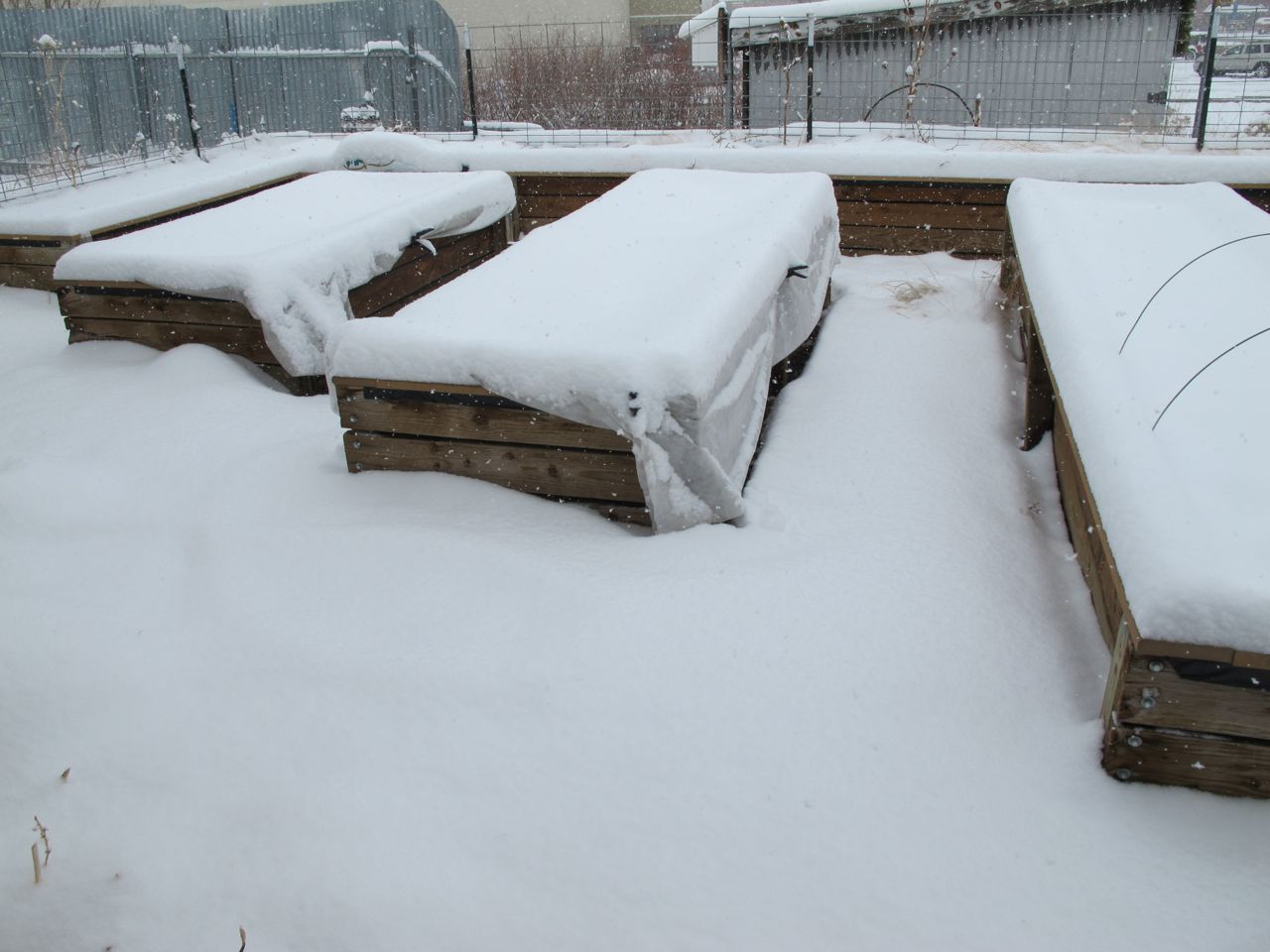 When I got up in the morning, I was very glad I had taken the time for that quick harvest. Because snow blanketed my garden. The greens bed is the middle one in the photo, with its row cover hanging down. 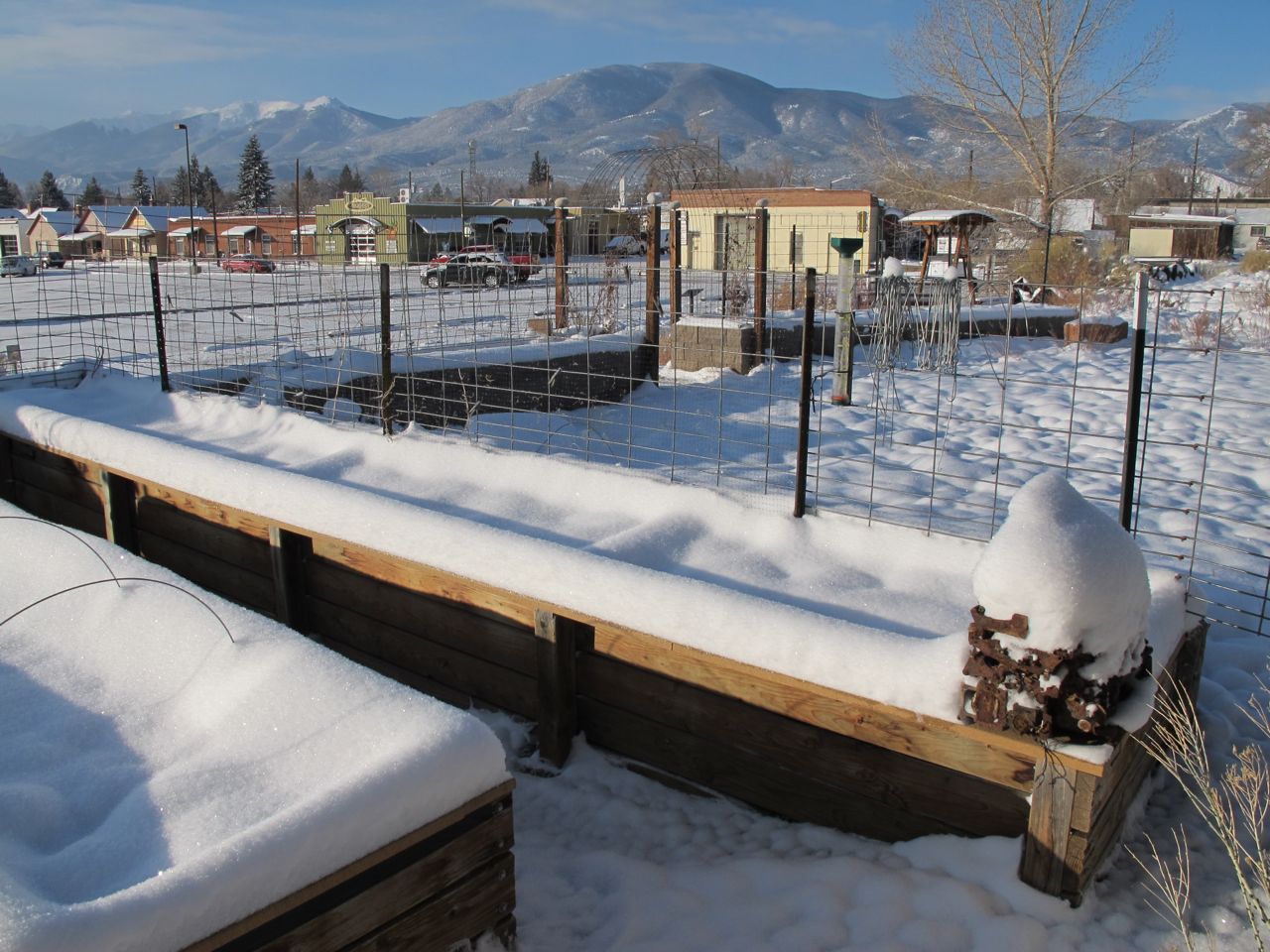 Salida with snow. The forested summit in the background is Methodist Mountain, “only” 11,707 feet elevation.

When the snow quit last night, I measured almost eight inches (twice the forecast amount). The total moisture came to four-tenths of an inch. Which may not seem like much to you, but it’s significant in this high-desert parched by years of drought.

This morning, the sun came out, and the snow began melting, sinking straight into the thirsty soil. By afternoon, it had vanished and the birds were singing happily in my native grassland yard, including a small flock of western bluebirds, the first I’ve ever seen here. They foraged energetically for grasshopper nymphs, grabbing and swallowing them head-first. (Chow down, bluebirds.) 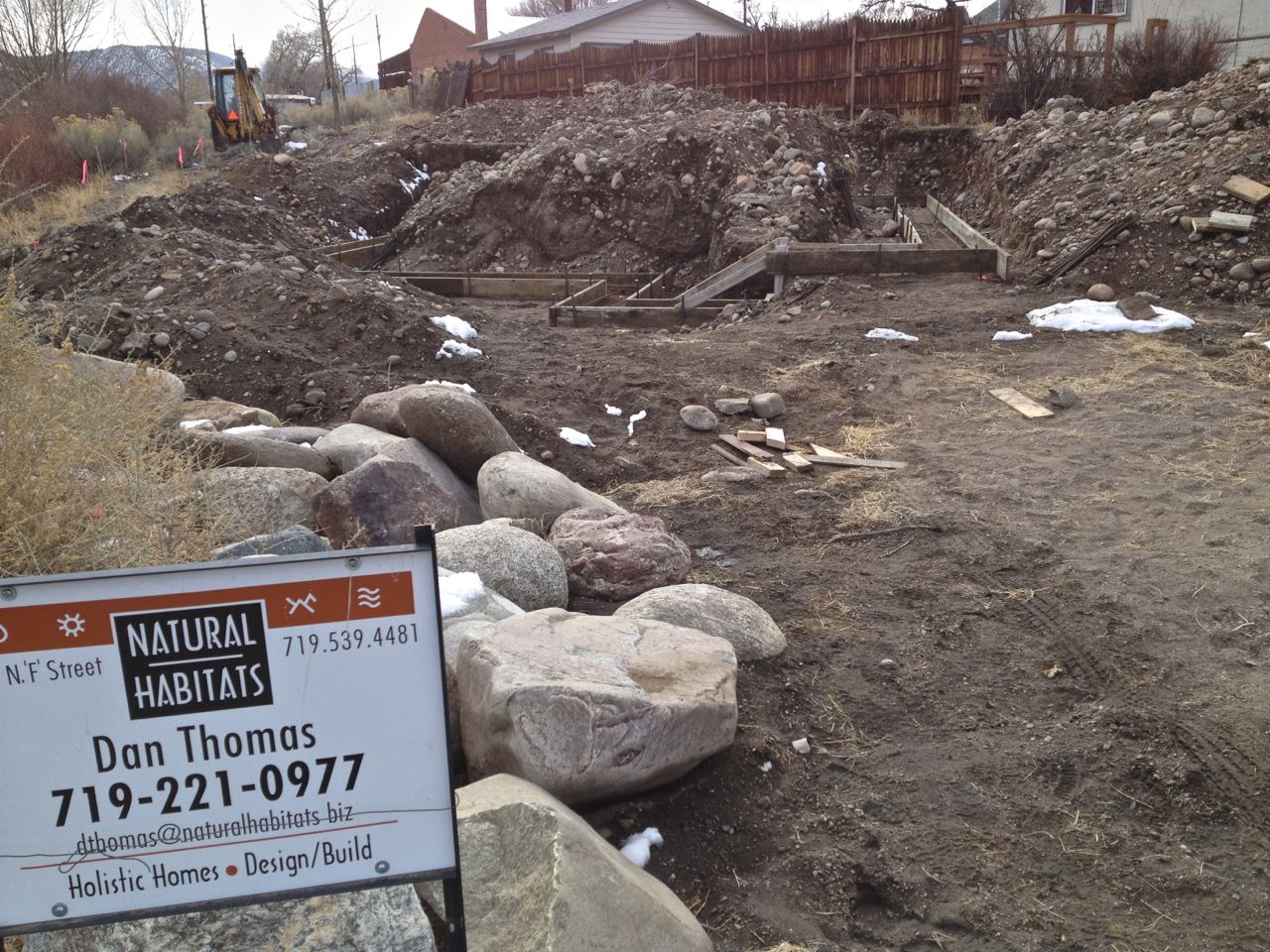 Later, I snatched a few minutes for a break and took a brisk walk by the new house site. I figured the snow would have prevented my concrete guys from starting to lay out the forms in the footer trenches. Wrong.

There’s the street view of my tiny house-to-be, looking toward what will be my side porch and kitchen wall. Woo-hoo–I can see it emerging! 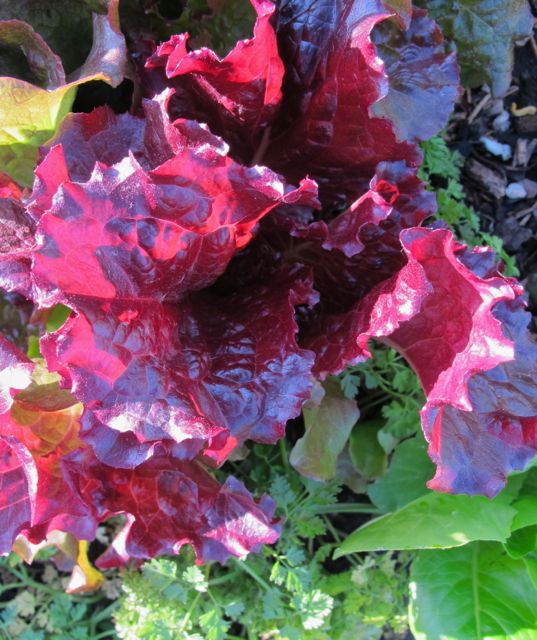 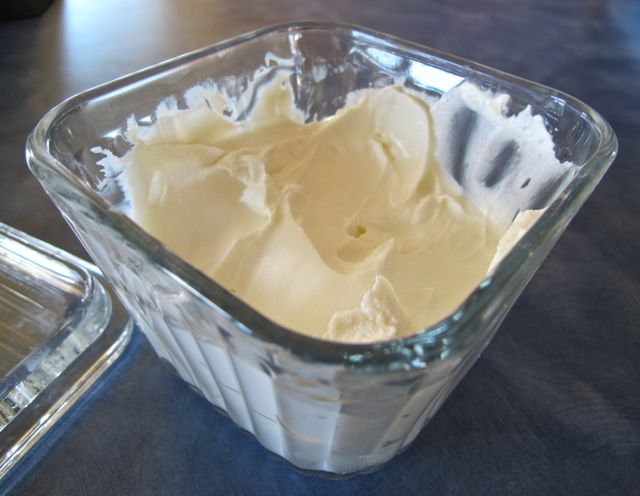 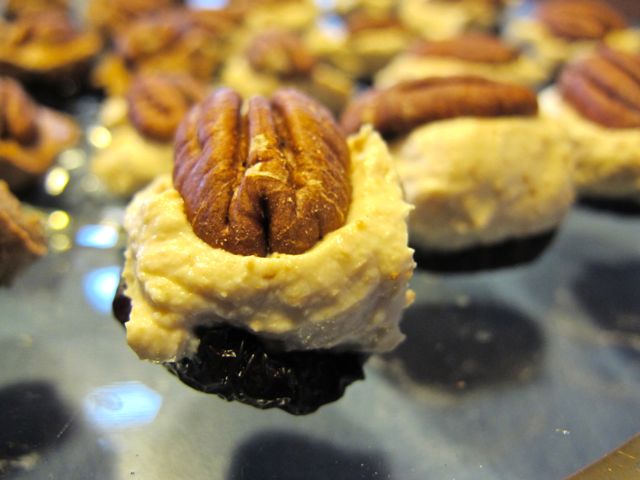 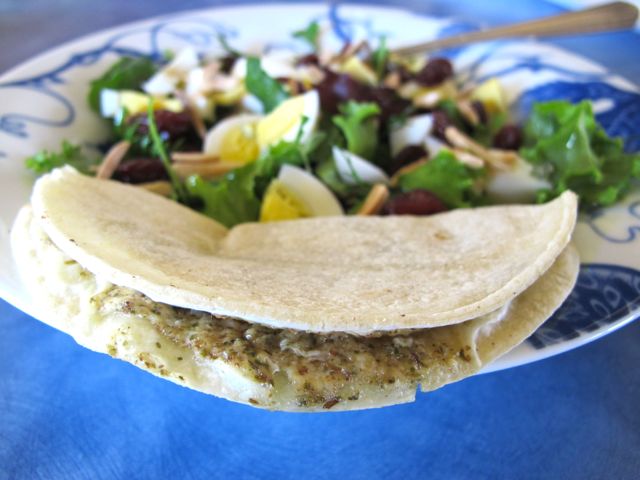