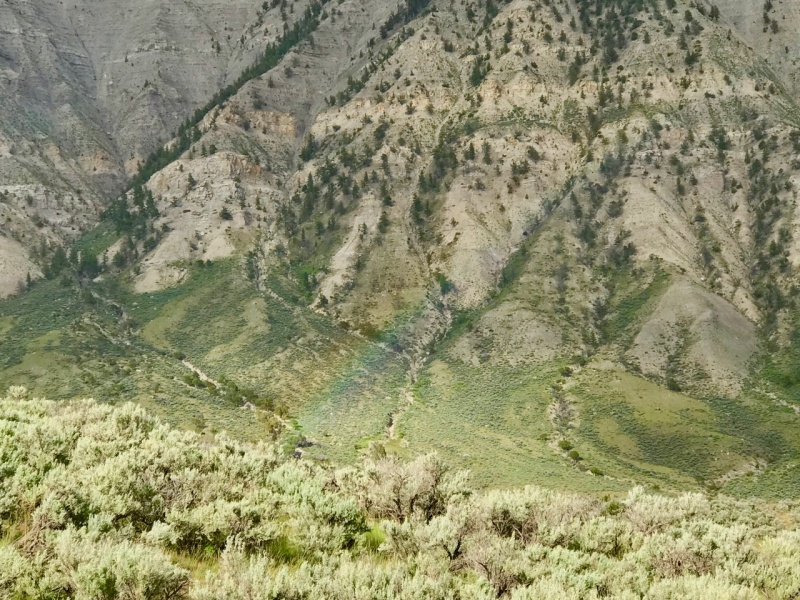 I'm writing this from my space at Mammoth Campground in Yellowstone National Park, with rain thrumming on Red's roof, and me drying out after a wet morning of digging invasive weeds. (The photo above is the partial rainbow that just appeared in a brief patch of sun between showers.) The good thing about a couple of days of wet weather is that it's easier to pry stubborn perennial weed plants out of the soil. The bad thing is that all of the plants are soaking wet, so I end up getting pretty wet too.

Being wet and cold while doing hard physical work is nothing new for me. I've been an outdoors person all my life: I grew up hiking, backpacking, and cross-country skiing; I worked in the backcountry as a field ecologist when I was younger, walking miles every day as I mapped and described forests and grasslands. In recent years, I've done carpentry and renovation, and now I spend my "vacation" time in Yellowstone hand-digging invasive weeds in bone-hard, muscle-aching sessions. 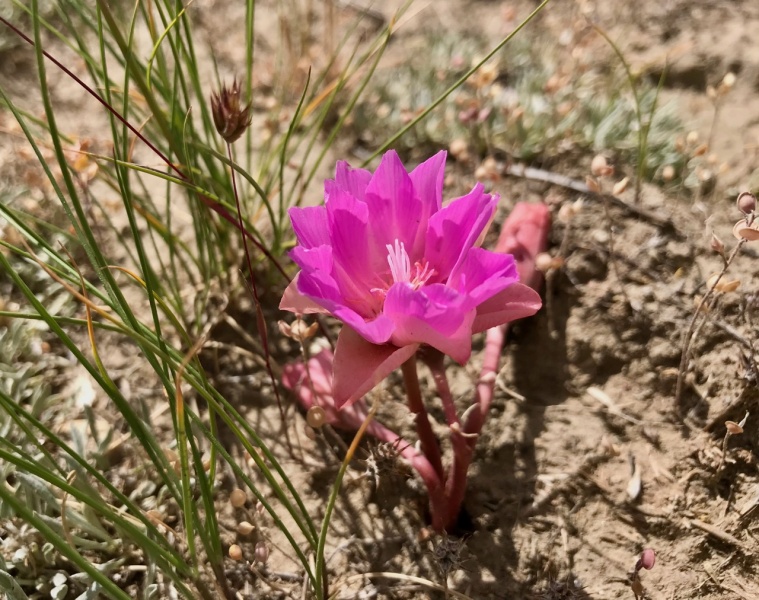 Bitterroot (Lewisia rediviva), one of my favorite spring wildflowers and the state flower of Montana, is one of the native plants that flourishes where I've removed invasive weeds in Yellowstone.

What's new is that I'm learning to notice when my body has had enough. Enough stopping and digging, enough being cold, enough wet. And once I notice I'm beginning to tire, instead of pushing myself to do more, I do something I would never have done back in the days when I believed myself entirely invincible: I stop working. Not immediately, of course.

I'm not that good. But sooner than I once would have, usually soon enough to keep my Lupus from kicking in and sending me into a state of feverish shivers and muscle aches that make me feel like someone beat my whole body with a ball-peen hammer.

You'd think I would have learned that lesson long ago, since I've had this autoimmune condition all my adult life. I have learned to mind my energy and my limitations in many ways.

But not with work I love, work that puts a smile on a my face and a light in my soul. When I'm digging in new perennial plants for the pollinator habitat in my yard or wielding tools to do finish work on my house; when I'm digging invasive weeds to restore wild communities in Yellowstone, I am in the zone, making a positive contribution in the world, and I am so not paying attention to my body. That's when I'm likely to work beyond exhaustion and make myself sick, and then have to pull back and take it easier for a few days or a week. 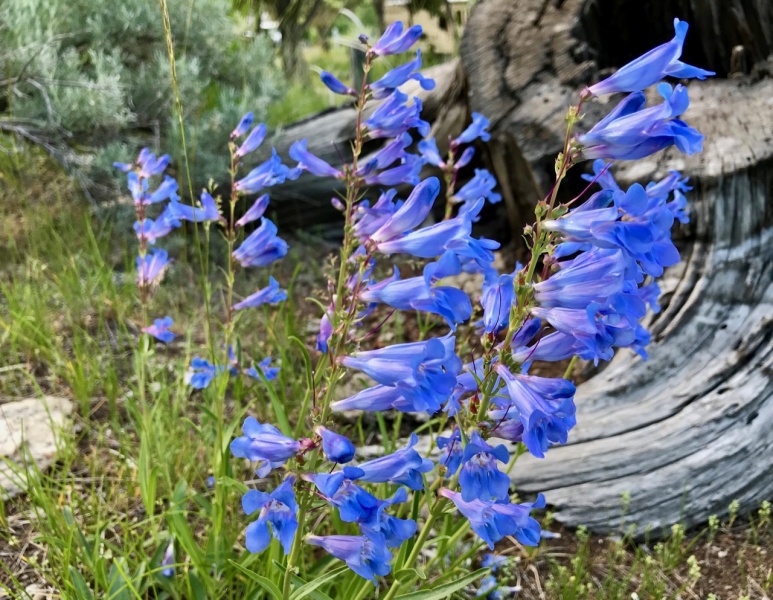 Rocky Mountain penstemon (Penstemon strictus), another native wildflower that flourishes where invasive weeds are removed. I dig weeds to restore these plants and their community.

Only since I've been here in Yellowstone this week, I've noticed myself paying attention to my body and my physical condition, and pulling back before I am exhausted, not after. I'm surprised, but I like it.

It could be age bringing some belated wisdom–I'll be 62 this September, unarguably a senior.

Or it could be the badger I saw on my way to Mammoth on Friday afternoon. I was three hours into my drive, thinking ahead to getting to the campground and claiming my site, and getting my first look at my weeding areas. It was a showery afternoon, and I had just slithered through a bear jam (a mama black bear and three cubs near the road) that had traffic stalled for half a mile south of Tower Junction, and I just wanted to get on my way.

I passed a car stopped dead on the road to shoot a video of an elk, and then swooped around a corner with clear road ahead when I saw a hump of salt and pepper fur fronted by a wide head bisected by a black slash in the middle of my lane: a badger. Motionless. 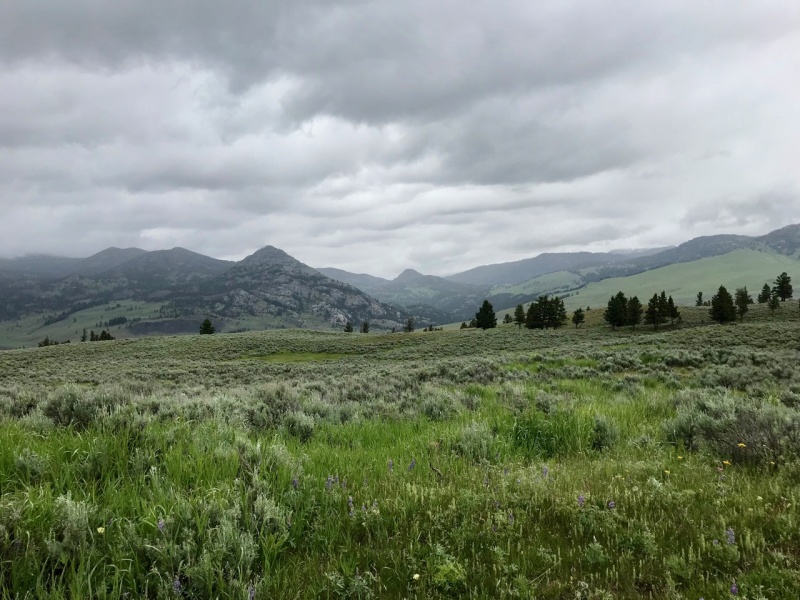 The body was under my truck and gone before I had a moment to respond, and when I did, I thought, I can't stop. I have to be in Mammoth by four.

Only that was a badger, dead on the road. The last badger I saw dead on a highway was thirty years ago, and that one set me on this path of speaking for those whose voices we fail to hear and atoning for the thoughtless destruction we cause to Earth, our home.

The essay I wrote about that first badger, "Picking Up Roadkill," a piece that appeared in the Denver Post, and also formed part of one chapter of my last book, Walking Nature Home, still ranks as one of the best pieces I've ever written. It opened a door in my life, and gave my work new purpose.

And here was a second badger, and I was in a rush. I cursed under my breath, found a place to turn around, drove back and pulled Red as far as I could off the narrow highway. I reached behind my seat and found my weed-pulling gloves, waited for a break in the traffic, and dashed onto the road. As I  carefully lifted the badger's body from the pavement, I was surprised by how limp and warm the body was, as if the animal was simply sleeping.

For a moment I thought the badger might wake and snap at me. There was no blood, no skid marks, no broken bones. Just the badger's heavy form, soft fur, and brown eyes. Just death.

Tears filled my eyes as I carried the badger off the road and laid it gently on the ground between two fragrant sagebrushes, lupine blooming nearby. I lingered a moment, my hand on that thick fur, saying good bye. And then dashed to my truck, peeling off my gloves. 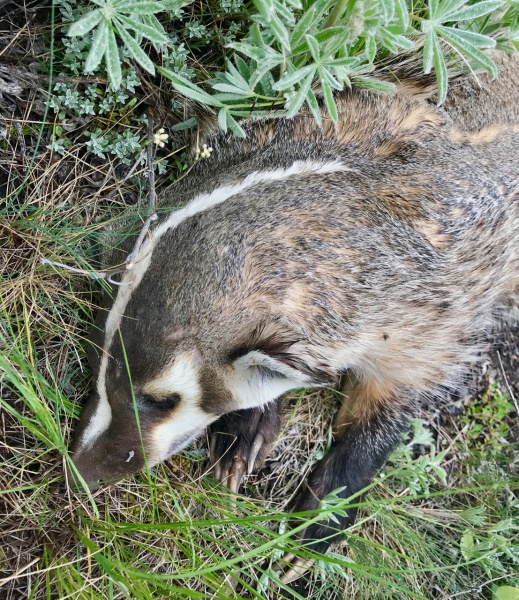 "Thank you, badger," I said, as I pulled Red back onto the road and drove on. "I get it. I'm slowing down."

As I spoke the words, I felt the badger in my hands again, felt the weight of the limp body and that soft fur, felt both badgers, thirty years apart, and I promised my own body that I would pay attention, go slower, be more mindful. Take my time.

And now, with rain thrumming on Red's roof and the windshield steaming up from my out-breaths, I am doing just that. Taking my time, letting my body rest between bouts of pulling invasive weeds. Savoring my moments. I can't wake that badger, killed crossing the road in its home territory of Yellowstone, theoretically a protected place.

But I can live my life in a way that honors the lives of badgers and all other wild beings by taking my time and doing what I can to mend this battered world and all who share this extraordinary home, our Earth. Me too. 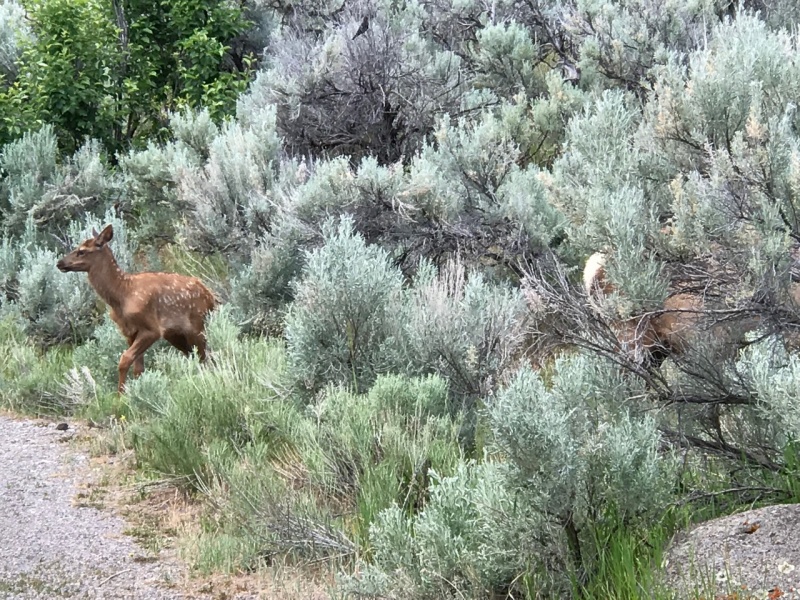 An elk calf who watched me weed for a while, along with her mom.