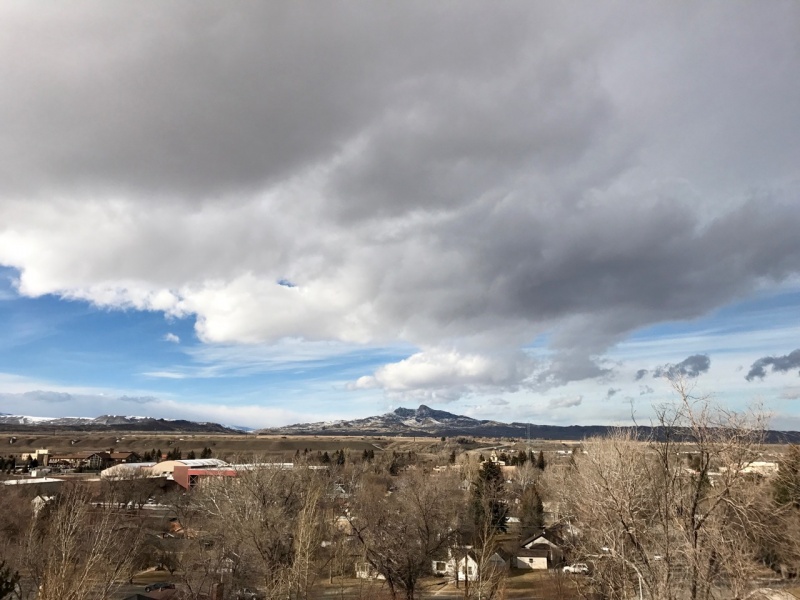 I first heard about the Indivisible movement from my 88-year-old dad in January, not long after I moved to Wyoming. In our weekly call–he lives just 15 minutes from my brother and sister-in-law, but I still check in almost every weekend, since Dad lives alone and is legally blind–I asked what was up in his world.

“Well,” he said, “three gals from Panorama [the senior community where he lives] and I visited our Senators’ offices to talk about our concerns.”

“We’re using the Indvisible Handbook,” he added. “And following their recommendations about how to communicate with our members of Congress.”

I hadn’t heard of Indivisible then, and as Dad filled me in about the grassroots movement, my mind leapt to the Pledge of Allegiance, which as a child of the public schools, I recited every school-day for more than a decade:


I pledge allegiance to the flag of the United States of America, and to the Republic for which it stands, one Nation under God, indivisible, and with liberty and justice for all.

(That’s the version adopted in 1954; the original version was shorter, especially the final clause, which read simply, “one nation, indivisible, with liberty and justice for all.”)

Within the next couple of weeks, Wyoming Rising, the group that formed out of the Cody Women & Allies Rally, adopted the Indivisible Handbook as its guide for action. I’ve been impressed by the speed with which the movement has grown, and its effectiveness in getting out the message of fairness, of liberty and justice for all.

The name “Indivisible” is brilliant: for its simplicity, its evocation of the patriotism in the Pledge of Allegiance, and for its reference to what is a founding concept of this democracy of ours: we are “one nation, indivisible.”


Indivisible. n. Unable to be divided or separated.

No matter our religious, cultural, racial or political differences, we have more in common as human beings, as citizens and residents of these United States, than not. At heart we want the same things (though not necessarily in the same order): good lives for ourselves and our families, love, jobs, comfortable homes, religious freedom, education, a healthy environment, financial security, health care, a future that looks bright.

It seems to me that we are most likely to achieve those things if we work together, instead of fracturing on lines of ideology and politics.

I am reminded of the Alexsandr Solzhenitsyn quote on a Solstice broadside sent out by Clifford Burke and Virginia Mudd of Desert Rose Press:


If it where only so simple! If only there were evil people somewhere insidiously committing evil deeds, and if it were only necessary to separate them from the rest of us and destroy them. But the line dividing good and evil cuts through the heart of every human being. And who is willing to destroy a piece of his own heart? 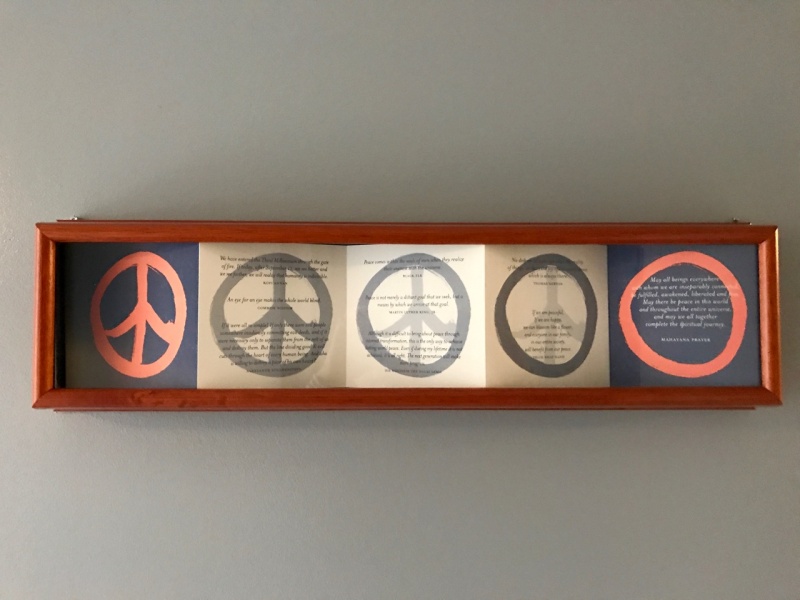 None of us are perfect. None of us have all the answers. But together, we can do great things–for all.

On the house restoration front, it’s been a busy week. Probably the biggest change is that the weather was balmy enough that Jeff Durham, my contractor, was able to work outside and remove the carport addition that turned my front entry into a dark and forbidding cave. 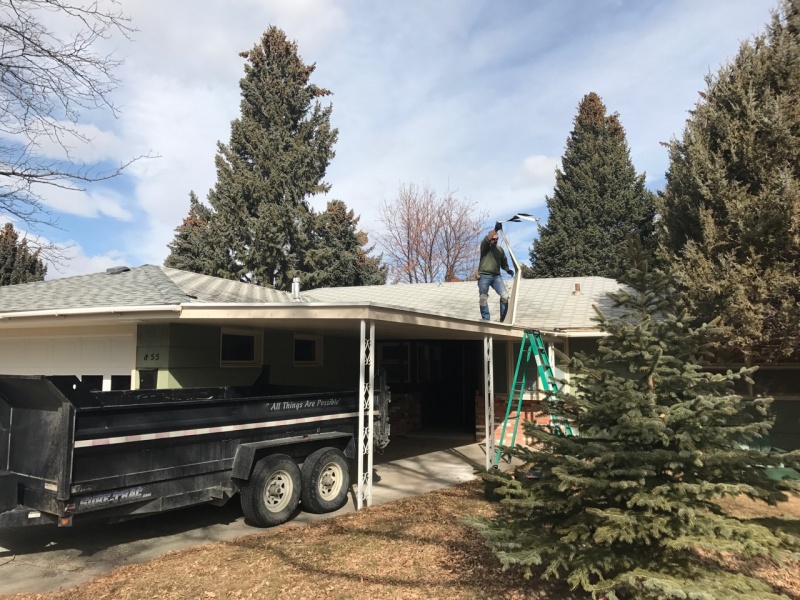 The front entry before, with Jeff up on its flat roof (which didn’t drain and thus had begun to rot). My front door is back there in that dark hole. 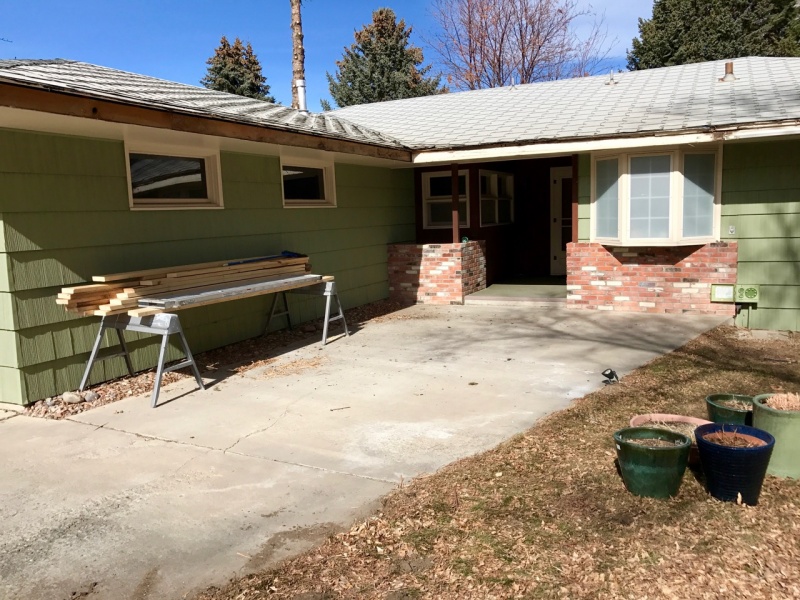 The front entry after, with my new front-door patio exposed (room for the cluster of pots sitting on the lawn, plus perhaps a stock-tank planter full of tomatoes and basil….). In the morning, the sun now reaches under those eaves and lights the kitchen. 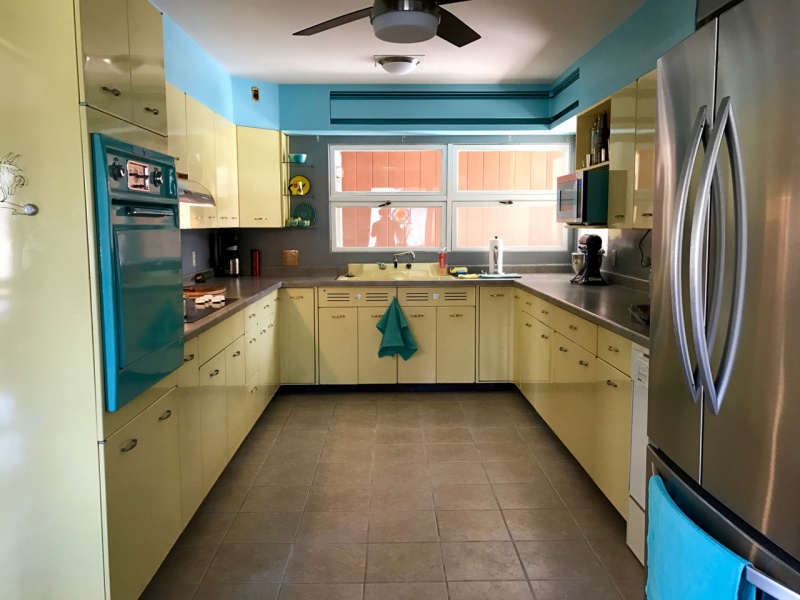 Tree-removal work commenced as well, thanks to Aaron Danforth of Arbor Solutions Tree Care, beginning with the big spruce that was threatening to fall on my living room and dining room. For those who hate the idea of removing trees, let me reassure you: When Aaron is done removing three mature spruces, seven Rocky Mountain junipers, two sick European Mountain Ash, and one green ash tree split almost to its base, I will still have a mini-forest of five huge spruces, three crabapple trees (which will have space to breathe and grow), one green ash and one honey-locust. 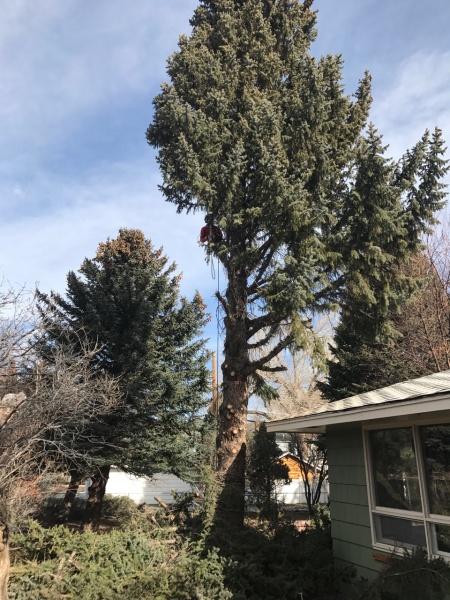 Inside the house, we’re replacing plumbing fixtures that barely work with new efficient ones (one toilet done, two more to go), and, in the most visible development, Shantel, Jeff’s daughter and also mother of his adorable toddler grandson, Jayden, is painting in between mom-ing and school (she’s working toward a nursing degree).

This weekend Shantel finished the fussy work of painting the kitchen wall above the cabinets “Cloudless” blue to match the wall oven and microwave, and painted the end wall of the adjacent breakfast nook in the soft yellow I picked to go with my vintage metal cabinets. 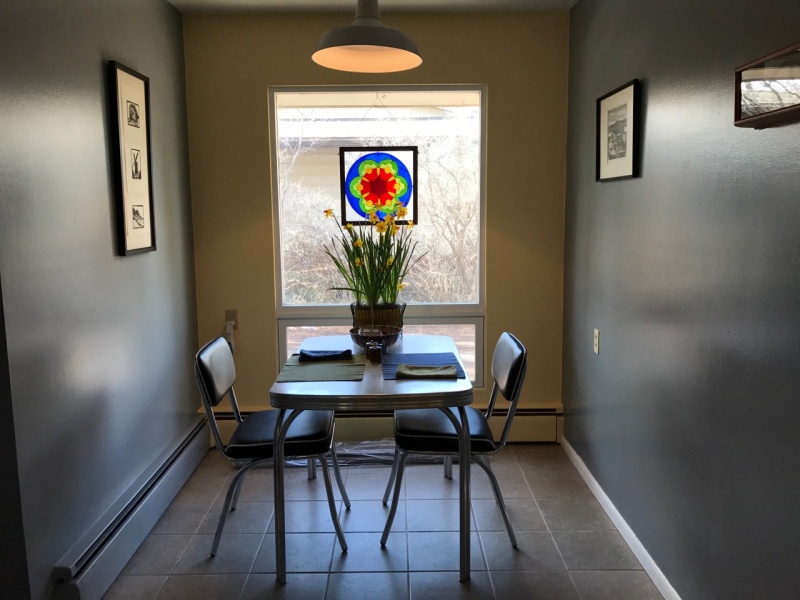 (Art on the left-hand wall by Salida printmaker Sherrie York; mandala by Tommy Williams of Riverton, Wyoming; vintage table from Connie and Jay Moody of Cody;  jonquils from Kerry and Dave Nelson of the former Ploughboy Local Market in Salida)

And then she really got on a roll and painted two of the living room walls with that same yellow. (“They Call it Mellow”–you have to love color names!) Between the new paint and removing the horrible brown drapes and hardware, the room looks bigger, lighter and brighter. 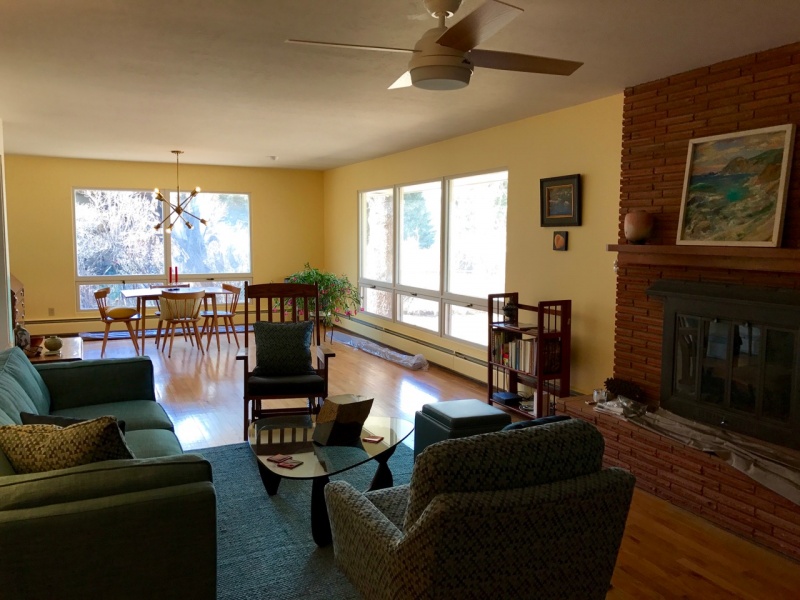 Next week, Jeff will install the insulating roman shades that are currently lying on the floor, and then start framing in the space in my bedroom that will become a small “en suite” bathroom (so when I’m old, I won’t have to share the main bathroom with my live-in companion…).

Did I say that I love my house? And that it’s satisfying, healing and downright exciting to help bring it back to life?

I am grateful–to be alive, to be home again, and to be involved in so much positive work, my writing, this house-restoration project, and in speaking up for the earth and my fellow humans. Bless us all!