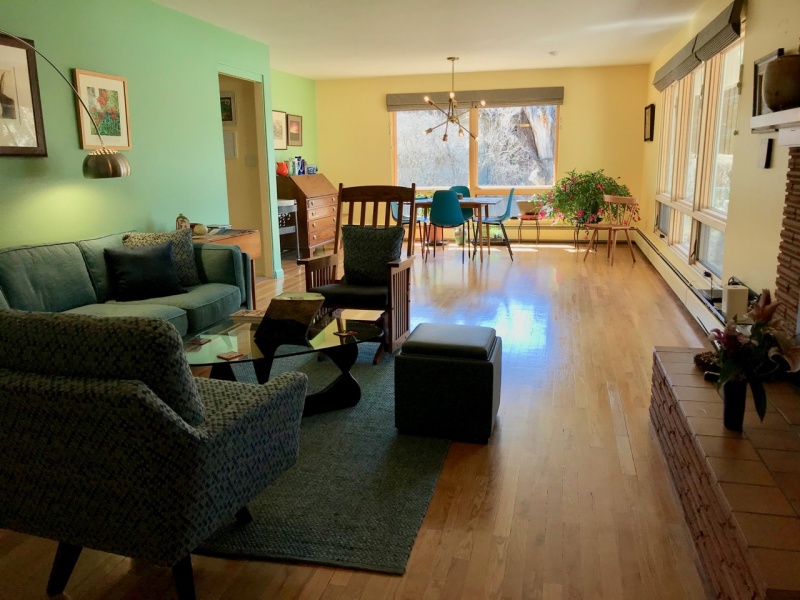 I'm in New Mexico for my final work trip of this spring, and today I took the day off (I know, me, not working?!) for some personal care. (I'm working on that finding-a-sustainable-life-pace thing, and taking time off to take care of myself is part of that practice.)

This afternoon, I was telling Heather, my fantastic hair stylist at Rock Paper Scissors in Santa Fe about my renovation-project-in-progress of my house in Cody. (That's my renovated mid-Century Modern living-dining room in the photo above. It was not in that kind of shape when I bought the house.)

"You love a house project, don't you?" she said.

I do. It occurred to me later that I've been engaged in house renovation or building projects for much of the past two-plus decades, beginning with the sweet little brick duplex Richard and I bought as our summer home in Salida, Colorado, in 1995, when we still lived in New Mexico. That duplex was built in 1902 in Salida's wrong-side-of-the-tracks West Second Street neighborhood, close to what was then an extensive railroad yard.

Like many houses in the neighborhood at that time, the duplex had "potential" in real estate parlance, meaning it was in very bad shape. The building boasted an ornamental brick front (which had been spray painted blue) and original wood sash windows (which neither opened nor shut after nearly a century of weathering), hand-plastered walls, antique wiring (so old it was actually flammable), and plumbing put together with duct tape instead of actual joints. In hard rains, the roof leaked down the inside of the walls, and there were locust sprouts growing through the joints between the pine floorboards in a few places.

But the price was right, and the little duplex was in walking distance of everything we loved about Salida: the river, the library, the town trail system, the hardware store, and downtown with its galleries, coffee-shops, and bookstores. So we bought it, fixed the worst problems, and rented it until we moved to Salida fulltime two years later. 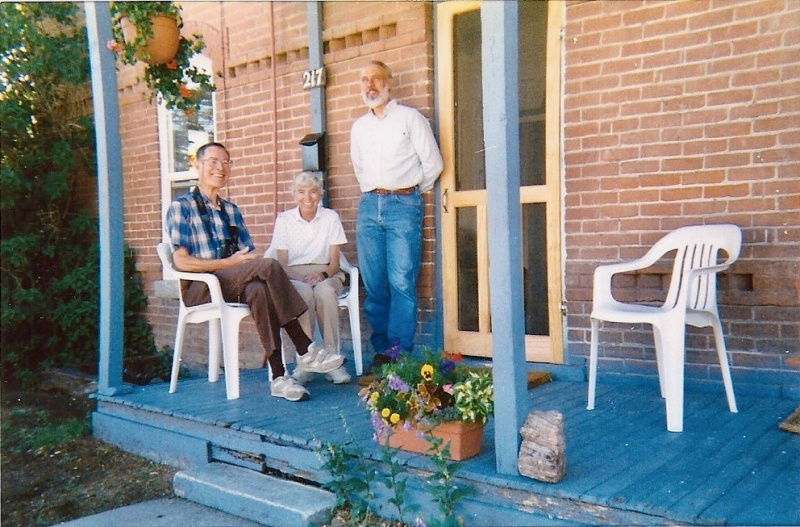 Dad, Mom, and Richard on the dilapidated front porch of the duplex in the summer of 1997. We (I and our alcoholic handyman) had carefully sanded the blue paint off the brick front by then.

By the time we moved, Molly was in college, and Richard was on the road as an expert witness testifying in cases in 23 different states about the deregulation of the telecommunications industry. His usual MO was to arrive home on Friday night, write or edit testimony over the weekend, and fly off to the next case on Sunday afternoon.

Which left me in charge of the crew making our place habitable. While I finished my fifth book. Mind you, it was Richard who understood building, and spoke "tool" fluently, not me. But I was there and he wasn't, and no construction project stays even close to schedule if the decisions have to wait for the weekend for the job boss to be home.

So I became de facto job boss. Our contractor (thank you, Bob Spencer!) and his crew learned to come to me with not only questions, but explanations for what the outcome of the decisions I was making implied. I learned a lot about house guts and renovation before that duplex was finished enough that we could fully move in. I also learned to trust my instincts.

Which came in handy over the course of the six years (!) we spent building Terraphilia, our house across the alley, and began the renovation on the historic brick industrial building that was Richard's studio. For the most part, Richard handled the building and renovation, and I handled restoring the land and block of adjacent creek. But after my experience as job boss on the duplex renovation, I had a say in the design and building decisions. 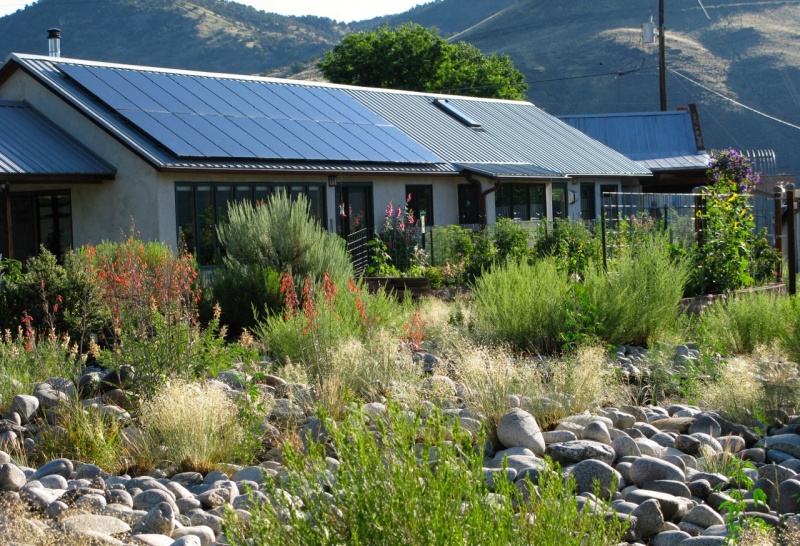 To Richard's (and my) surprise, I also proved an adept helper in a pinch, like the October night when he came home after finally wrestling the last sheet of leaking metal roofing off of his studio building, and reported that underneath, the decking planks had large gaps between them. A snowstorm was predicted by morning, so he needed to get waterproofing membrane on the roof or risk damaging the hundreds of books and tools in the studio, along with his big table saw, planer, and other woodworking machines.

I volunteered to roll the layers of waterproofing membrane across the steep roof so he could do the skilled bits like repairing rotten planks and stabilizing the brick parapets. After some discussion, he agreed (I suspect only because no one else was available). We finished "drying in" the roof at just before two am, and then staggered across the alley to bed, exhausted. The next morning brought ten inches of heavy, wet snow. The studio roof didn't leak a drop.

My budding competence at building renovation projects came in handy again when Richard died of brain cancer five years later, leaving both the studio and the house unfinished. The studio needed a ceiling, new wiring, new plumbing, and some drywall and paint. A combination of friends (a shout-out to expert painter, Robbie Smith!), volunteers (thank you, Grant Pound and the Colorado Art Ranch crew), and professionals completed that work with me as job boss. 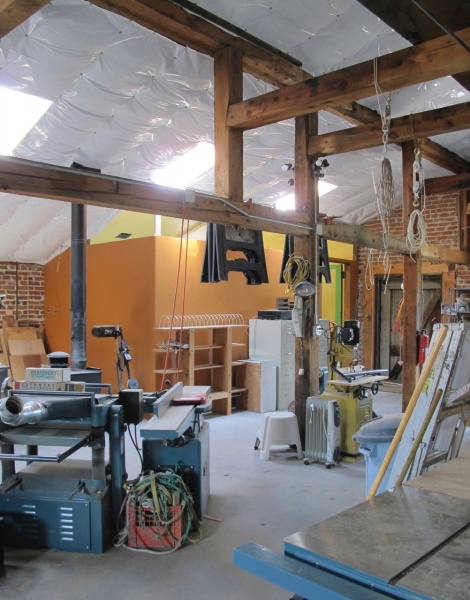 The inside of the historic studio building after finish-work.

The house was a bigger project. It lacked interior trim and baseboards, interior doors, cabinet doors and drawers, and a finished master bathroom (only the toilet and my soaking tub were in place and functional), and involved design and materials challenges that Richard had talked about often, but never solved. After our nephew did the trim-work and baseboards in the attached guest apartment (thank you, Andrew Cabe!), I imagined hiring out the rest of the house. Until I looked at my finances and realized I couldn't afford to hire anyone else.

I had only been job boss up to that point, and occasionally grunt labor. My tool competence was approximately nil. I had everything to learn, and no time to waste. I needed to sell the whole complex to pay an overwhelming amount of post-brain-cancer bills. When I rashly told my friends Maggie & Tony Niemann, software developers who also rehab houses, that I had decided to do the finish work myself. They said, "We'll teach you." 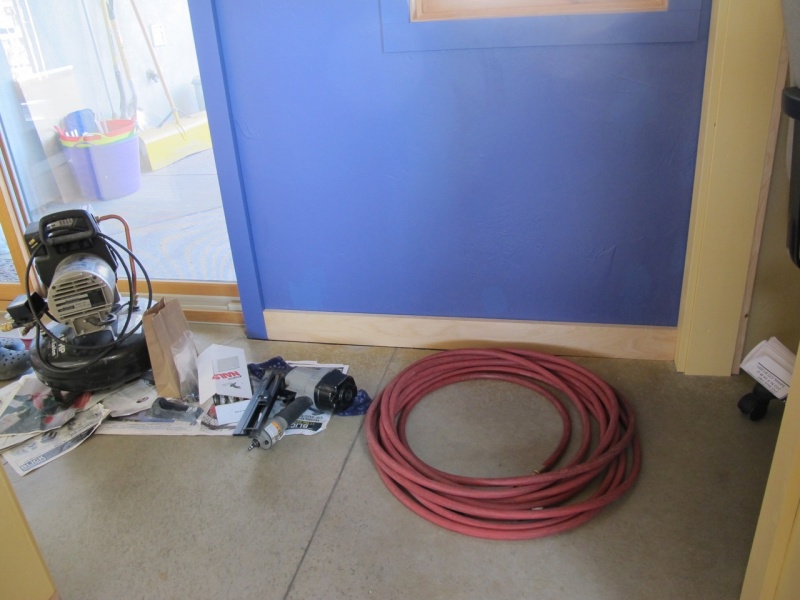 My best friends, the air compressor and larger of the two pneumatic nailers, both of which lived in the back hall of the house for nine months.

And they did: we spent an average of two evenings a week and one weekend day for the next nine months at the work. I am in their debt forever. In the process, I  learned to live with an air compressor in my back hall (to power the pneumatic tools, which I also learned to use), to mill lumber with the giant table saw, planer, jointer, and belt sanders in Richard's studio. I learned how to work with not just wood, but also metal, stone, and other materials. And I learned how to understand what lay behind the design decisions I made. Hands-on work implementing your own decisions is perhaps the best way to truly learn. If not the easiest. 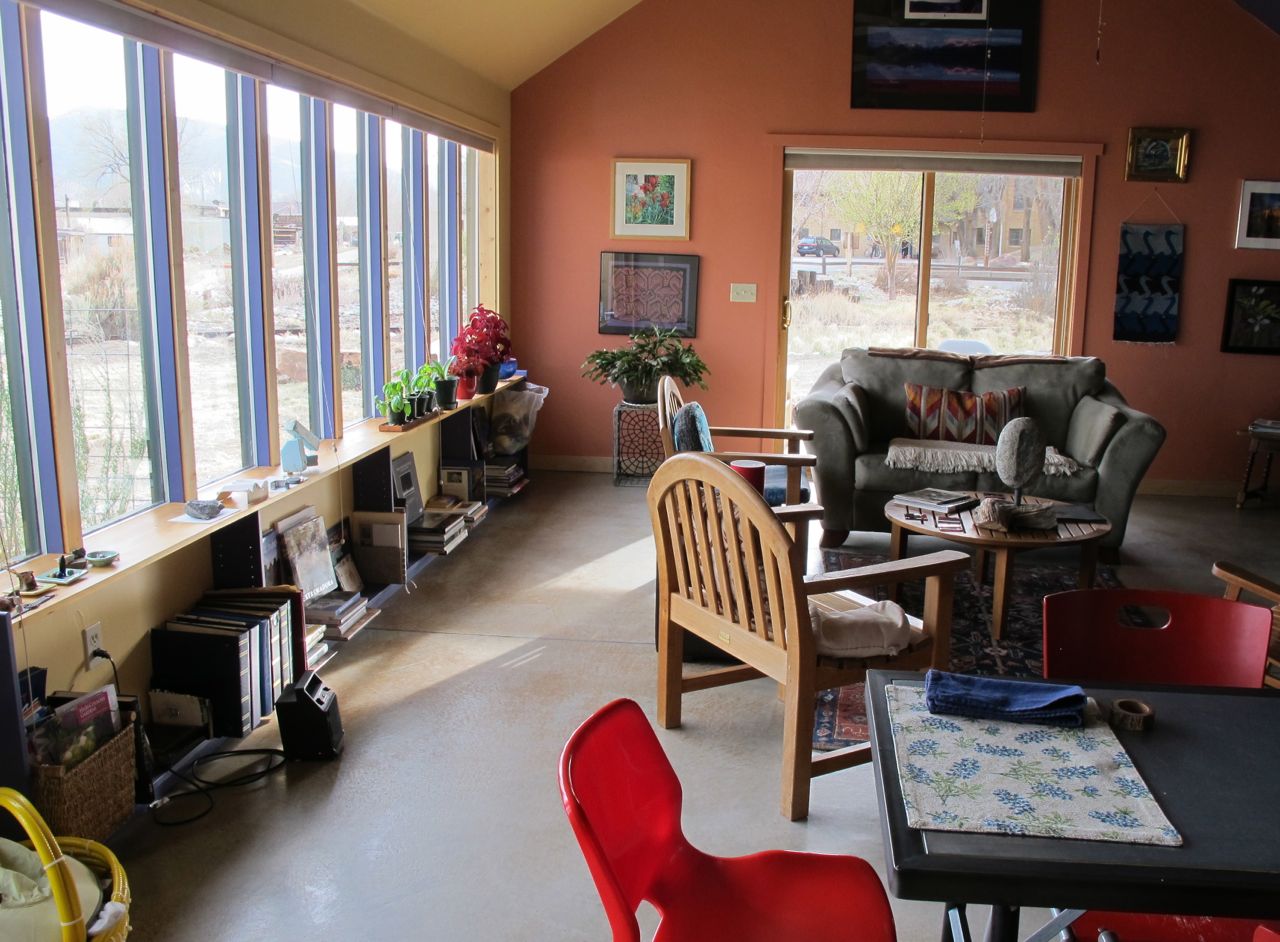 The living room at Terraphilia, the big house, after we boxed in the studs dividing that long block of windows, and added trim and baseboard throughout.

While Tony and Maggie were teaching me how to finish the big house and helping me do the work, I also oversaw the design and construction of my little house (Creek House) and garage with second-story guest studio (Treehouse) at the other end of the block. For that project, I went back to job boss, only occasionally picking up my tools to do some finish details. It was the first building project I had overseen completely on my own, and I'm still proud of it. The spaces turned out as beautifully as I imagined, and the passive solar design worked just the way I planned. (Whew!) 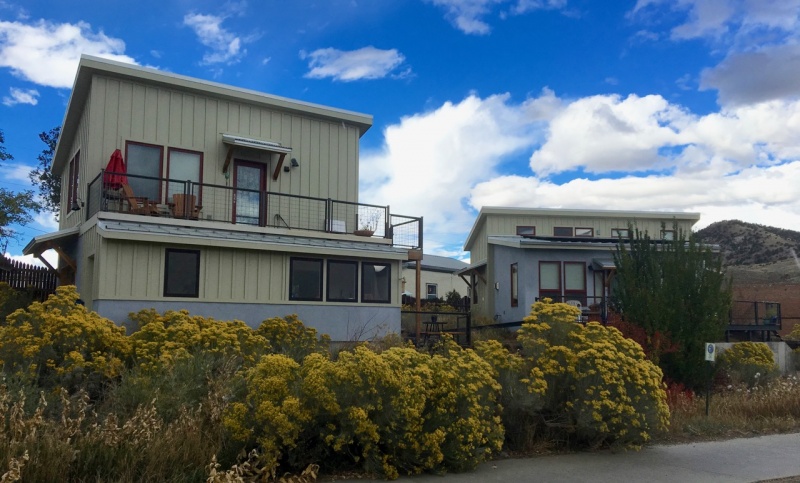 Treehouse (on the left) and Creek House (on the right) from across the creek that inspired the name of the house.

Three years after selling Terraphilia and the studio, and moving to Creek House and Treehouse, I picked up stakes and headed home to northwest Wyoming. Where I fell in love with the totally dilapidated mid-Century Modern house and its too-big yard that are my current project. (Both house and yard had been negletced for decades. My friend Connie, after touring the house when I first looked at it, told her husband Jay that the place was "scary." In hindsight, I agree!) 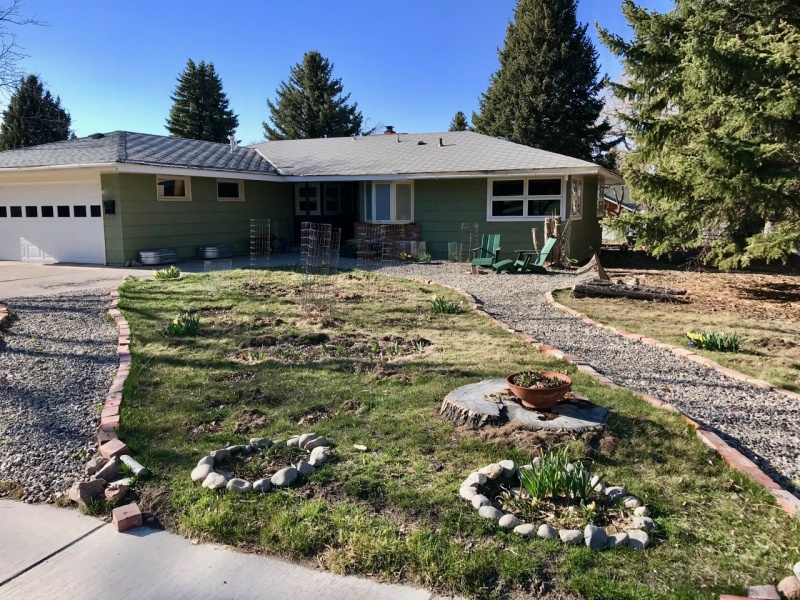 New roof and eave work to come next month, plus more plantings to replace the lawn in the front yard…

A year and a quarter after that January move, I can see the end of my current house and yard renovation project. It's been deeply satisfying to revive this once-beautiful house and ready it for its next sixty years. I've mostly been job boss on the house, but the yard has taken a lot of physical and mental labor: muscle and grit and determination. So I have sweat and skin in the game, and I'm already wondering what's next.

I realize now that building and landscape renovation is in my blood, and I'm not likely to quit anytime soon. So somewhere out there is the next project that will suck me in… The truth is I'm wholeheartedly in love with the whole renovation and building thing: the challenges, the design problems, and the work with tools and materials. It's satisfying to bring structure and place to life, engaging body, brain, and heart. 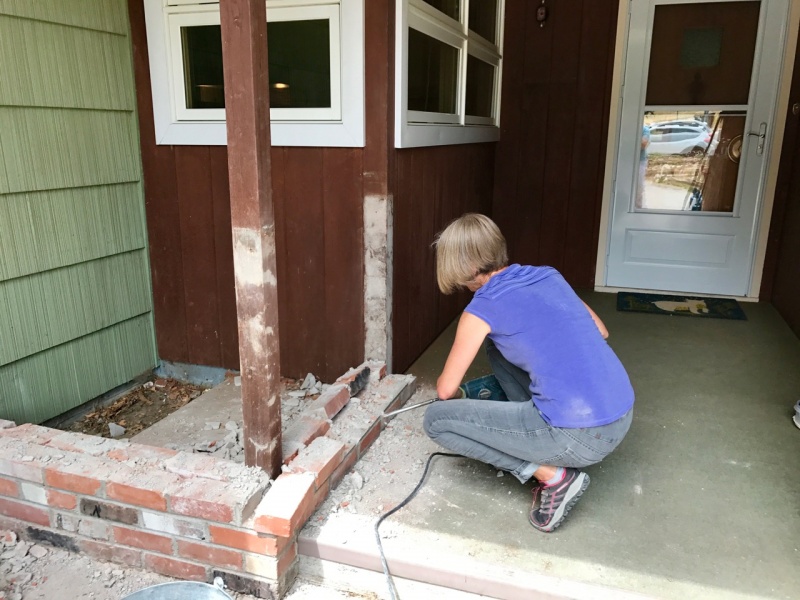 Me, sweaty and determined Tool Girl at work…