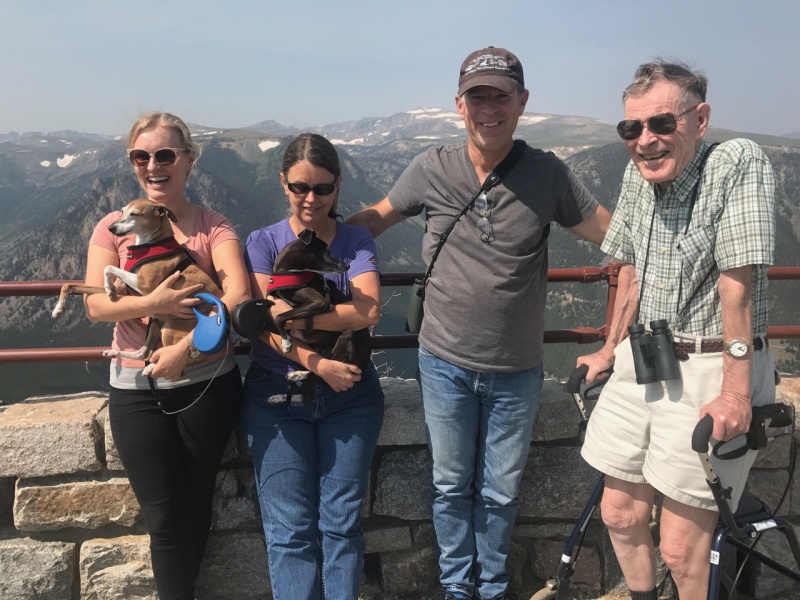 This was a crazy week, as befits a week that includes a total eclipse of the sun passing across central Wyoming (the exact center of the zone of totality was just about two hours south of where I live in Cody). I spent last Sunday, Monday, and Tuesday madly working to get the house ready for a family visit from my brother, sister-in-law, youngest niece, 89-year-old Dad, and my sister-in-law's two Italian greyhounds, Sarge and Pepper.

(The photo above is the fam atop the Beartooth Plateau, the largest alpine plateau in the lower 48 states, on Wednesday morning. From left to right: Alice, my niece, holding Pepper; Lucy, my SIL, holding Sarge; Bill; and Dad)

In the midst of my family-visit-prep frenzy, I also had a lovely visit from Harry, Nicole, Ethan and Diedre Hansen, incredibly talented metalsmith friends from Salida. (Check out their work at Sterling & Steel.) They were on their way to a show in Bend, Oregon, and came to Wyoming for the eclipse. 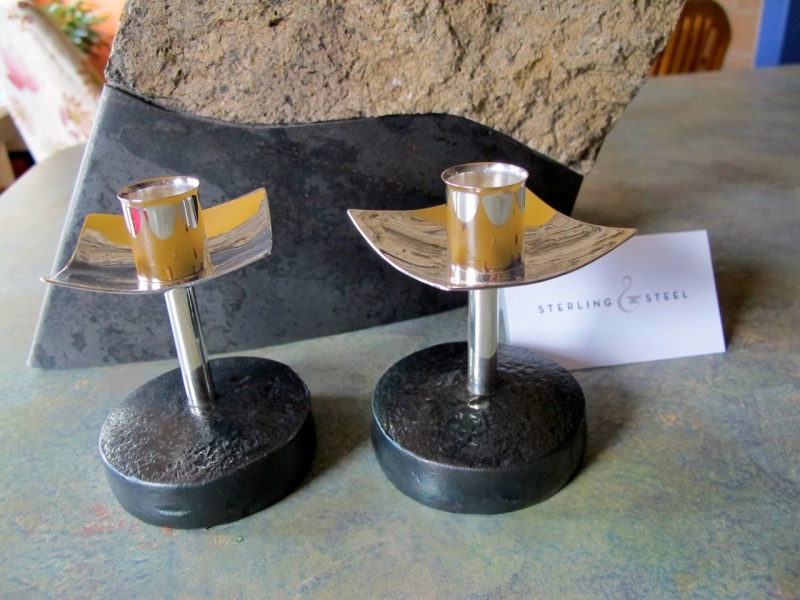 I had intended to take time out on Monday to drive south with Cody friends and see the eclipse. Only I woke that morning feverish and chilled, feeling very, very punk, and not up for going anywhere farther than from my bedroom at one end of the house to the kitchen at the other end to greet my contractor, Jeff, when he arrived at seven am to work on the basement bathroom.

Work that had to be finished by Tuesday evening, when the Subaru bearing the Washington crew was scheduled to arrive, since Dad would have the upstairs guest bedroom and bathroom, and Bill, Lucy, and Alice (plus Sarge and Pepper), would occupy the private and cozy family room downstairs with its own bathroom. 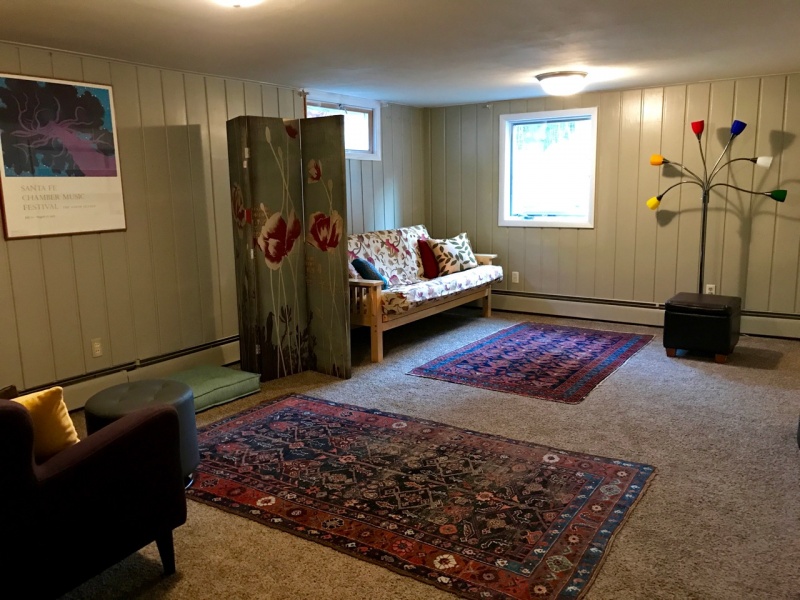 The family room was as ready as it was going to be, having already made the transition from ugly to comfortable over the past couple of months. 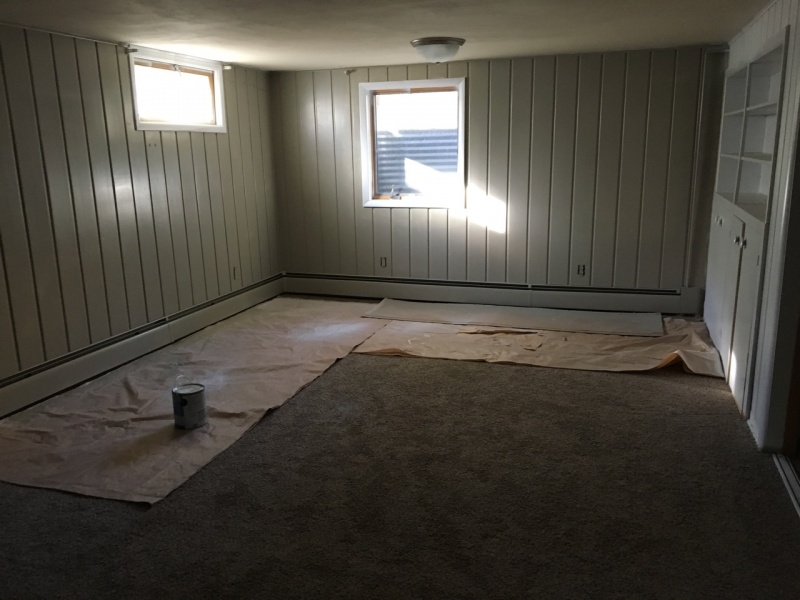 And when I first saw it last October (the photo does not really do justice to just how ugly the room was!)

But the bathroom… Well, honestly, it was so awful that until I realized that the family visit would come in August, I had tried not to think about it. It wasn't just ugly when I bought the house, it was downright scary; only one of the fixtures worked and was actually something you'd want to use. (Not the sink, nor the shower.) And the disgusting floor and termite-nibbled walls… Ick. 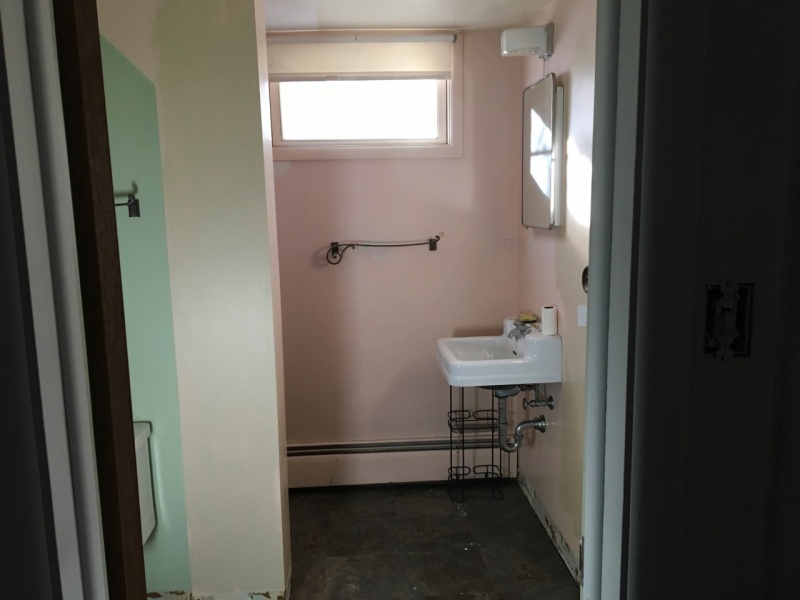 The basement bathroom when I bought the house, a room I described as one you'd want a tetanus shot before entering.

Improving the bathroom involved basically starting over within the existing shell. So I watched the shadow of the eclipse sweep across northwest Wyoming in between helping Jeff as he built a new shower in the gutted bathroom, and began laying new floor.

(I've seen a total eclipse before and it definitely put the "awe" back in awesome. Seeing the stars come out in the middle of the day, hearing the birds make nighttime sounds, and watching a 360-degree "sunrise" simply are unforgettable, one of those experiences that changes the way you understand the world.) 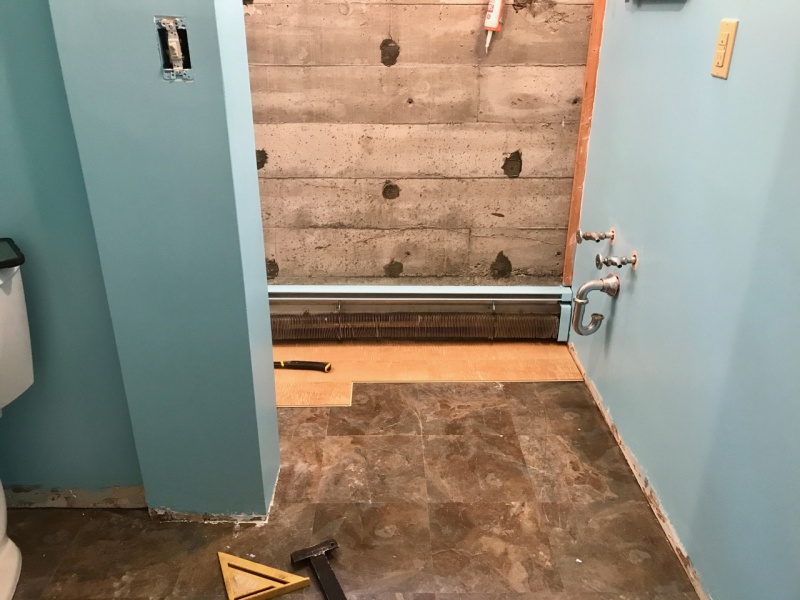 As it turned out, everything took longer than either Jeff or I expected (that darned eclipse!), and it was mid-morning on Wednesday before the bathroom was finished enough to be usable. Which was actually fine because Bill et al. didn't arrive until a day later than expected: they were in eastern Oregon watching the eclipse when Dad became unresponsive. He ended up watching the total eclipse through the windows in the back of the ambulance ferrying him to the clinic in Fossil, Oregon.

(He's fine. At 89, he sometimes forgets to drink enough water and notice when his chronically low blood pressure goes into the danger zone.)

So instead of them arriving in Cody Tuesday evening in time for dinner, we rendezvoused in Red Lodge, Montana, the next morning, and took one of our planned field trips–driving the Beartooth Plateau–as a caravan on their way into Cody. 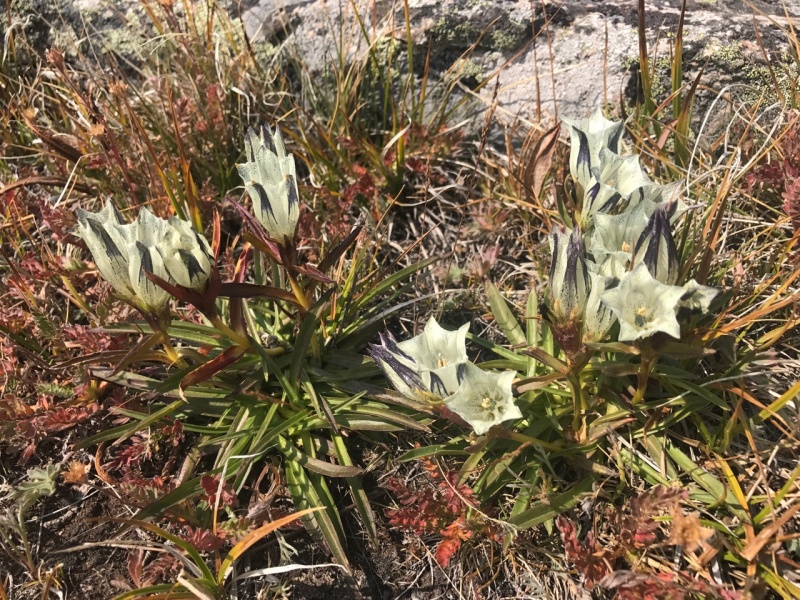 Despite a serious haze of smoke from huge forest fires in western Montana, it was a glorious day up on the plateau. The tundra was already russet and gold with fall, but we saw arctic gentians blooming, black rosy-finches, and a small family herd of mountain goats, the latter so close that Dad, who is losing his vision to both glaucoma and macular degeneration, could see them through Bill's scope. 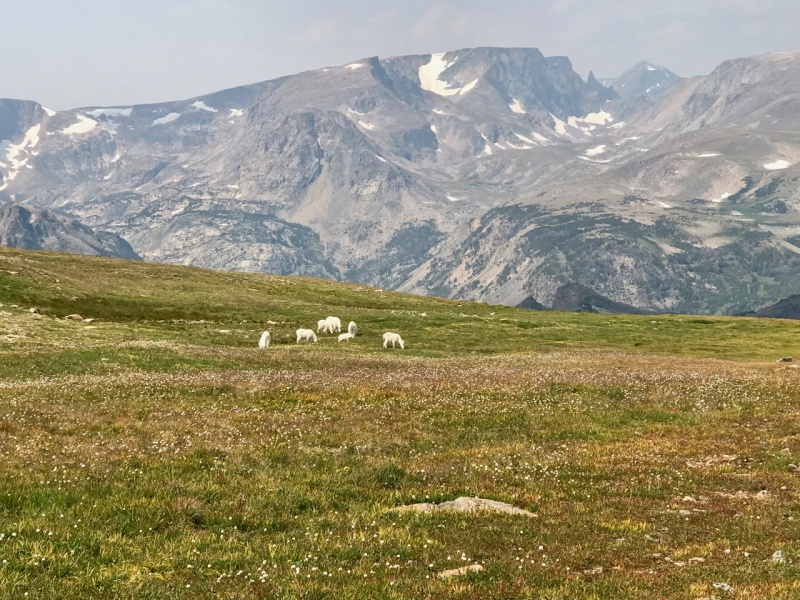 Mountain goats grazing a still-green swale in the tundra atop the Beartooth Plateau (that pointy arete in the background is the "bear's tooth" for which the plateau is named).

And when we got home, Jeff had finished enough of work on the bathroom that it looked great, so everyone was impressed. (Me included.) 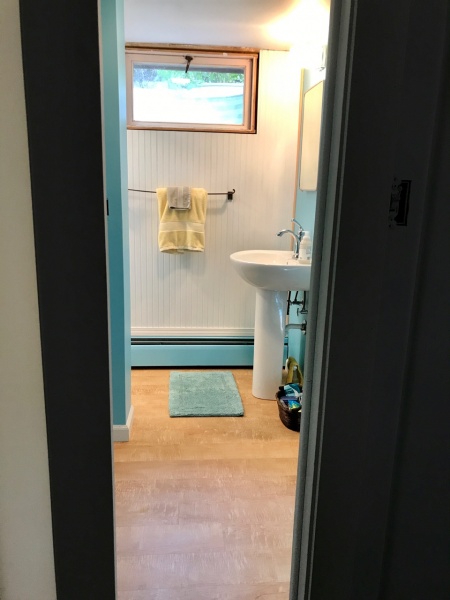 The basement bathroom, much improved…

The next day we wandered downtown, toured the Buffalo Bill Center for the West (actually, we only toured two of its five museums, the Draper Museum of Natural History, which I could easily spend a whole day immersed in, plus the museum about "Buffalo Bill," the stage persona of Col. William F. Cody, and Cody's fascinating and difficult life).

Friday morning, we split up. I drove Dad and Bill up the North Fork and into Yellowstone National Park, while Lucy and Alice and the two dogs headed south to Colorado to visit Lucy's sister TD. (Lucy and Alice wanted to go to Yellowstone too, but they had committed to being in Colorado Friday night.)

It was another gorgeous day, complete with an afternoon rainstorm which cleared out the smoke haze and opened up the distant views. I didn't take many photos–I was driving. But I enjoyed showing Dad and Bill "my" park. They have both been to Yellowstone a number of times before (I think we visited as a family for the first time when I was 8 years old and Bill ten). I took them to some favorite and lesser-known sights, and showed them the areas where I have been weeding these past two summers. 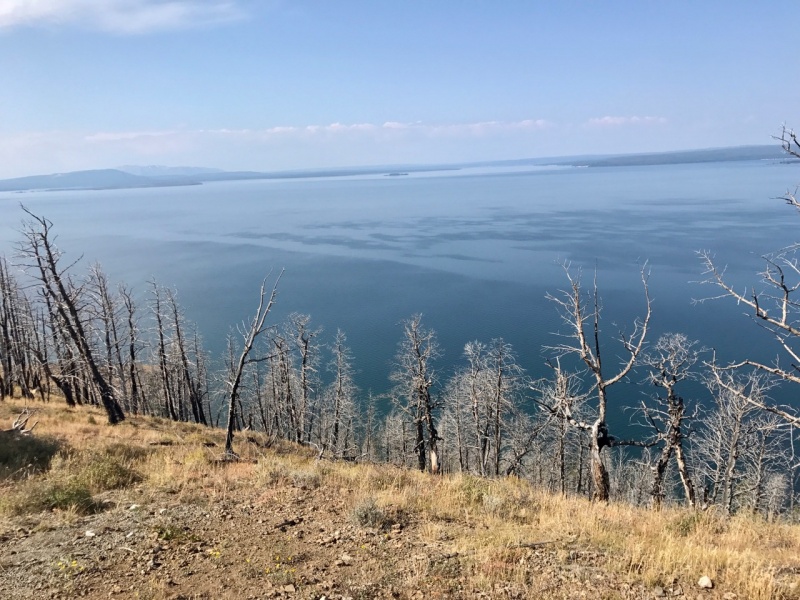 We saw bison and pronghorn and loons and swans and elk and all sorts of late-summer wildflowers. The traffic wasn't bad, and the rain was a true delight. 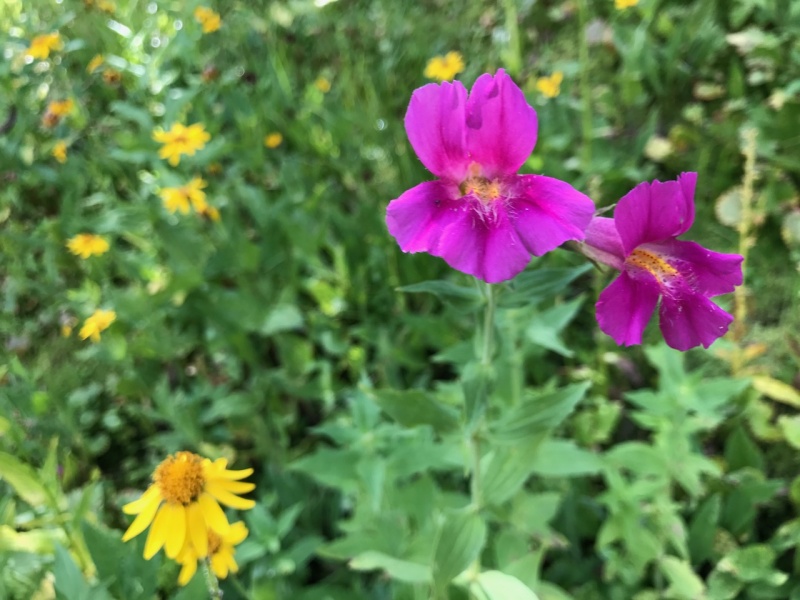 On our way home, as we wound down the Clarks Fork River (one of the West's few un-dammed rivers) and up and over Dead Indian Hill, Dad said, "I understand why you wanted to move back to Cody. I can see that you're happy here."

I am. And I feel very fortunate to have been able to come home to the place that has held my heart since that first family trip to Yellowstone fifty years ago. It makes me happy to think that Dad, who was quite worried about my move, now sees the place I love through my eyes.

The next morning, watching he and Bill watch birds at Alkali Lake just outside Cody, I realized that this likely is Dad's last trip to visit me. I'm grateful to Bill, Lucy, and Alice for bringing him, and grateful to have been able to show him my house, my town, and this beloved landscape. 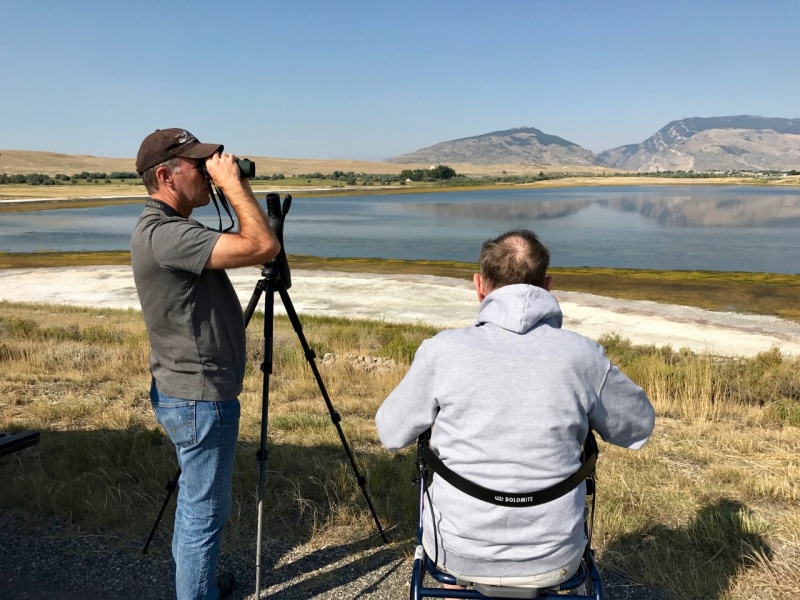 And on a current news note: My heart and thoughts are with southeast Texas, and to all affected by Hurricane/Tropical Storm Harvey. Please be generous in your support: Here's a round-up of ways to help.

Blessings to all, and stay safe.