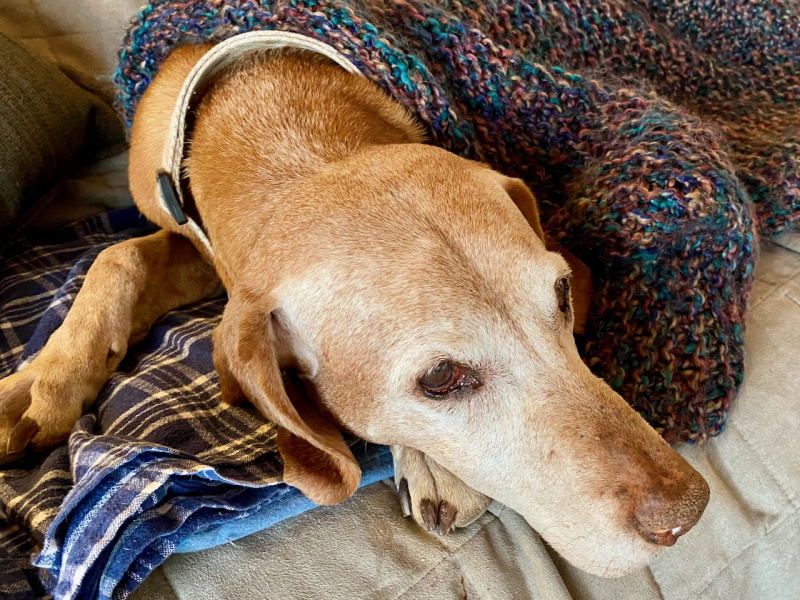 Before Badger, the Guy’s Vizsla, lies down on his heated mat on the couch to snooze away the time between walks and other outings, he always turns around two or three times, ruffles up his blanket, and then settles in with a big sigh. He’s customizing his spot to suit him.

(And that canine remodeling is why my beautiful blue leather couch wears a sturdy gray dog cover when Badger is in residence. As for the heated mat, Badger is almost thirteen–he’s earned his perks.)

I’m not so different than Badger. With every move in the past nine years since Richard died, I’ve engaged in my equivalent of circling several times and rearranging the blankets in each living space: remodeling.

The first move was to Creek House, the little house I helped design and build for myself in Salida, so that was a bigger deal than remodeling. I made that space my own in spades–I guess you could say I circled quite a few times!

Then came Cody, and the seriously dilapidated mid-Century modern house that I rescued, renovating from basement to roof, bringing house and yard back to beautiful life. That circling and rearranging the blanket took nearly two years, but it was oh-so-satisfying. (The neighbors were thrilled that the neighborhood eyesore turned beautiful too.)

Followed by my move to Santa Fe, and into a small condo that really didn’t need work, but was pretty tired. I replaced worn carpet with vinyl plank floors, renovated the galley kitchen, replaced the aging metal windows with new and more efficient wood ones, and updated the furnace and water heater. And added color to the walls.

When I bought Casa Alegría, my current house, my intention was only to fix what was actually wrong, including a faulty pellet stove with a pipe not up to code, leaky windows, and a mouse-infested attic over the garage and laundry room. And of course paint a few of the boring white walls more interesting colors.

I guess it should be no surprise that I haven’t limited myself to just those projects.

Casa Alegría now boasts a new, efficient and safe woodstove, new windows and screen doors, plus an exterior door replacing a small window, an attic that is properly sealed and insulated (and bio-cleaned so it doesn’t stink), photovoltaic panels on the roof that generate clean power for the house and excess for the power grid, new mini-splits delivering incredibly efficient heating and cooling, a new garage door that actually seals out cold and rodents, and of course, colorful walls.

My latest project as I settle in? Replacing the small flagstone patio in the backyard that was so buried under dirt and debris that I didn’t discover it until I used a shovel to dig out some weeds and hit rock.

As I circle and settle, I am contemplating what else I need to do to make this place fit me, the way Badger makes his couch space comfy. But first, I think I’ll just drag a chair out onto the patio and admire my new outdoor room. Before fall changes to winter with tonight’s snowstorm….