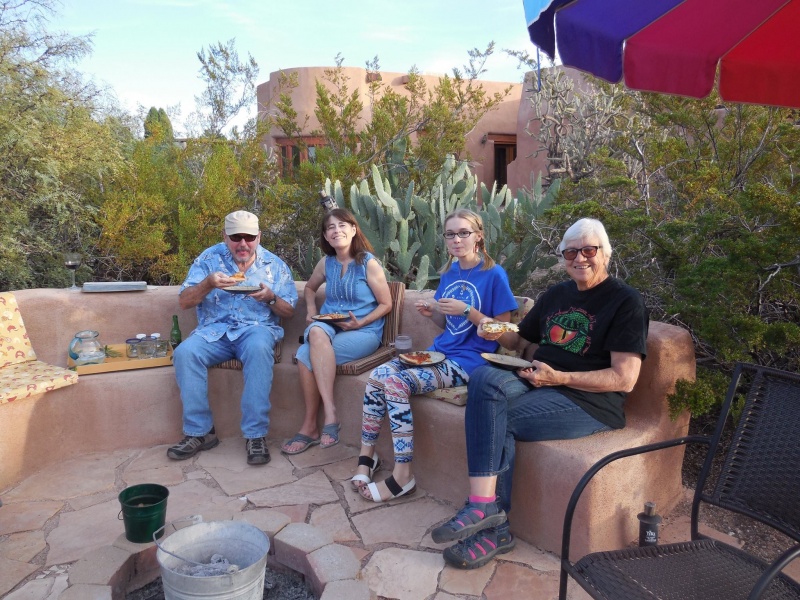 I’m back in Salida after four days and 1,077 miles on the road, this time driving to Las Cruces, New Mexico, to help celebrate the life of Ann Palormo, a dear friend who died suddenly in early November. (That’s Ann on the right in the photo above, eating pizza just baked in her neighbors’–the Teich family’s–new horno, outdoor oven.)

I wouldn’t have undertaken that drive in such a short time, especially after returning from my writing fellowship less than two weeks ago, and being in the maelstrom of details of buying and sell preparing for a move that is (gulp!) now just five weeks away. But Ann’s daughters, Cynthia and Melissa, asked if I would speak at the celebration, and Ann was one of those people who gave so much to the community and to me, that I couldn’t say no.

I met Ann, then Development Director of KRWG-FM, public radio, not long after Richard, Molly and I moved to Las Cruces in the summer of 1990. 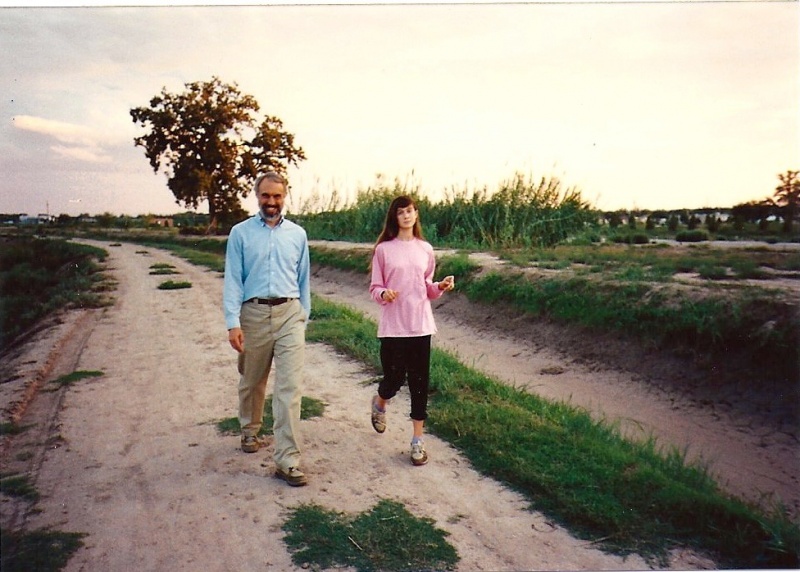 Richard and Molly on an evening walk on the irrigation ditch bank near Mesilla, where we first lived outside Las Cruces.

That fall, I followed a longtime dream and proposed writing and reading a weekly five-minute commentary on nature for KRWG. After then-music-director Tom Huizenga (now a music producer and reporter for NPR in DC) decided I was educable, my show, WILDLIVES, went on air. Ann almost immediately recruited me to volunteer to staff the phone bank for the fall pledge drive.

I’m an introvert. My idea of hell is to spend hours at a time in a noisy room talking on the phone with crowd of people around me cheering and shouting each time someone calls in with a pledge. Yet there I was, doing my part with enthusiasm.

Because Ann convinced me not only to agree, but to give my best to the effort.

That’s how she was. Ann was smart, thoughtful, passionate about contributing to the community, and extremely persuasive. It’s not that she had a glib tongue, she simply couldn’t hear the word “no.” She waited until your response turned not just to “yes,” but an enthusiastic yes.

Ann worked as a fundraiser and community-builder for New Mexico State University for 26 years, first for the radio station and then for the university Development Office. Outside of work, Ann brought her passion and talents to a wide array of community organizations from the American Association of University Women to El Caldito Soup Kitchen, and from the Habitat for Humanity and Girl Scouts to the Renaissance Fair and Master Gardener Program.

She was a connector, someone who had a genius for linking people and what they had to offer to the causes that could use those skills and resources. And having fun while doing it. She gave her own time and resources too, volunteering for and donating to many more community organizations than I can remember.

As I said in my comments at the celebration, what made Ann so inspiring, and the reason all of us were so willing to contribute to the causes she was passionate about, was her belief in the power of individuals to make a positive difference. Ann knew that politicians come and go, and the national pulse tends to swing from extreme to extreme; what’s important in the long term is what each of us do in our daily lives.

She lived her belief that our individual, grassroots contributions matter because they form the “common” ground in the word community. She believed we each had something contribute; her role was to nudge us to make good on our contributions, to work together to build a healthy community.

As I made the long drive north again, I resolved that I would honor Ann’s life by being the person she believed we each could be: someone who will work in her own way to make the world a better place. It takes each of us, working together, to grow a kinder, more compassionate world.

We each have something this world needs. There’s no better time than now to find our cause and be the people Ann knew we could be: committed, caring, funny, and passionate about working for good.

Thanks for believing in us, Ann. 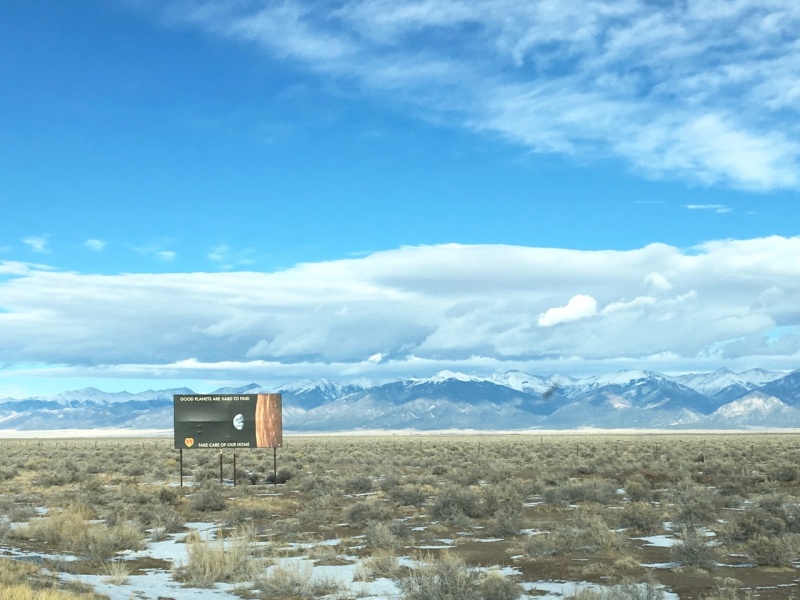 (Click on the photo to, as printmaker Sherrie York says, “embiggen” it and read the message on the billboard I see whenever I drive south to New Mexico. That’s my cause: restoring this earth and in the doing, we humans too.)