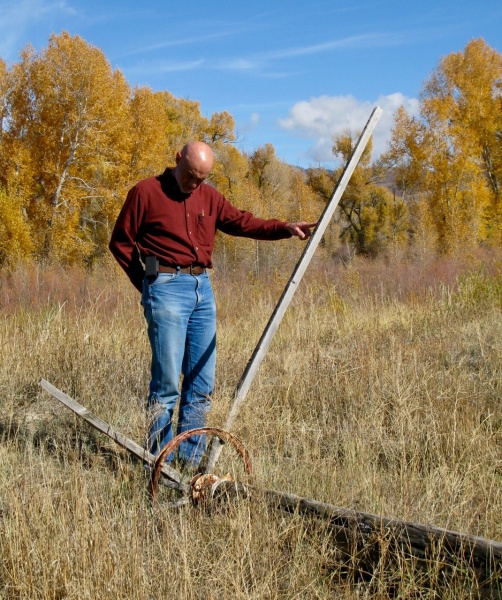 We arrived at Carpenter Ranch, our first stop on The Big Trip, the day after Labor Day. Betsy greeted us warmly. “The Bunkhouse is occupied, but you can take any room in the main house,” she said. “You can manage the stairs, can’t you?” she asked Richard.

“Of course.” His voice was confident. The narrow flight of steps leading to the second floor of the ranch house wouldn’t have been a problem for Richard a month before. Perhaps not even a week before. But they challenged that evening’s Richard. He froze at the bottom, unable to go upward. Finally the guy who had always led the pack took the steps slowly, one at a time like an old man, gripping the handrail tightly.

After dinner, we strolled out the ranch driveway—Richard’s stride confident again on level ground—and stood arm-in-arm listening to sandhill cranes’ bugling as sunset lit the sky. Richard smiled as he surveyed the view. “I am a lucky guy,” he said.

I swiped at tears and gripped his warm hand. We were still together. “I love you.”

(From my new memoir, Bless the Birds)

Last Friday, five years and three days after that final visit to The Nature Conservancy’s Carpenter Ranch in Northwest Colorado, I drove the gravel road through hayfields to the ranch buildings, swarmed by memories of our visits in the two years before Richard, the love of my life and my husband for almost 29 years, died of brain cancer. Our final collaborative project was at Carpenter and involved re-imagining a half-acre of unused lawn behind the historic ranch house into a public teaching/interpretive garden that, as I wrote at the time, aimed to “re-story” the place’s rich human and natural history. 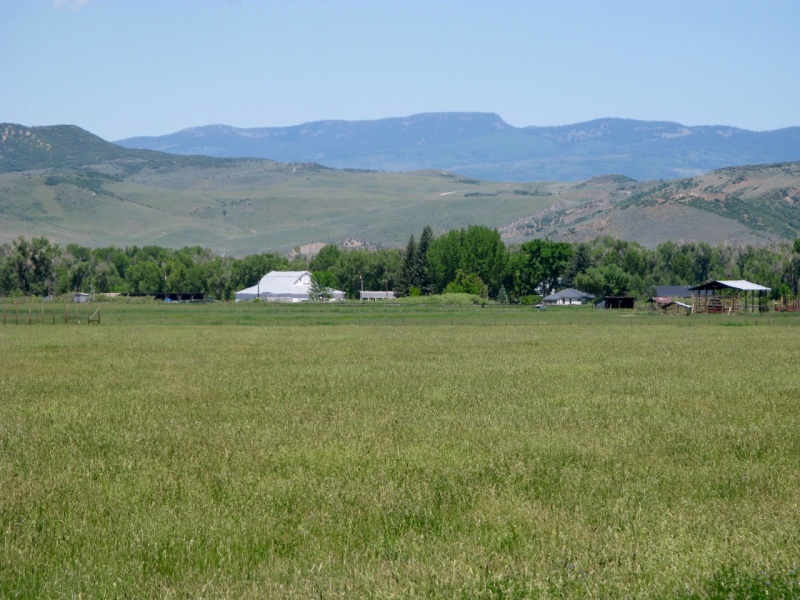 The ranch buildings at Carpenter across the hayfields

(Thanks to Connie Holsinger and the Terra Foundation, Grant Pound and the former Colorado Art Ranch for support of our working residency; and to Steamboat Springs landscape architect Erin Dickerson for handling the engineering and layout.)

Richard was involved in the initial construction of the garden but died before it was fully realized. (I would say “finished,” but a garden is never complete, and this one has certainly taken its own sweet time.)

I thought–ridiculously optimistically, as it turns out–I would be back the next summer to help continue work. For various reasons, including the fact that I was still sorting out my life and my finances, I didn’t get back to Carpenter that year. Or the next–by then I was working part-time and learning carpentry to do the finish work on the big house in preparation for putting it up for sale, which happened the following summer, when I didn’t return to the Ranch either. Or the next summer, when I was helping finish my little house and garage/studio, or the next.

Eventually, I realized that it wasn’t my busyness that was keeping me from returning to the site of the last project Richard and I worked on, it was my heart. So when I saw Betsy Blakeslee, Facilities Manager for the Ranch, at the Landscaping with Colorado Native Plants conference last spring and she invited me to return this fall for the Yampa Valley Crane Festival, I decided it was time.

Deciding and being ready are of course not the same thing (one comes from the head, the other from my still-wounded heart). So when I parked Red under the spruce tree by the bunkhouse where Richard and I always stayed on Friday afternoon, I felt tender and very vulnerable. 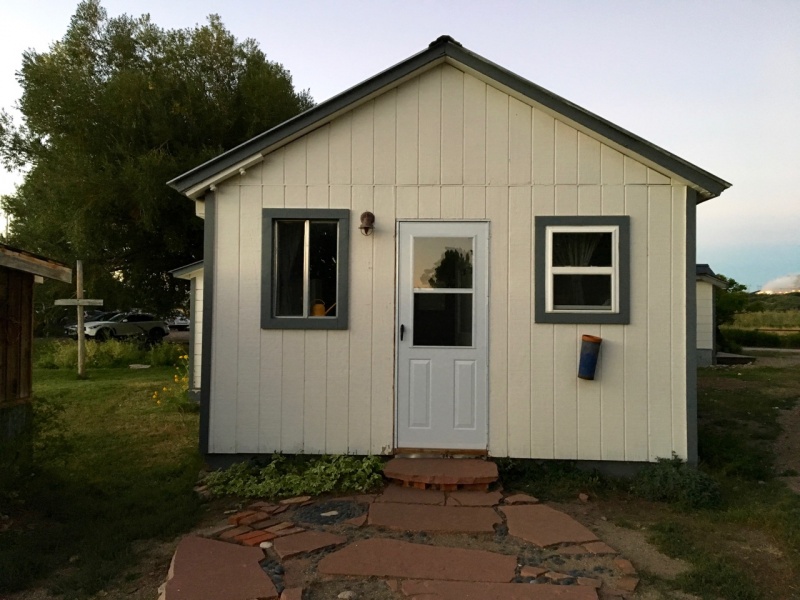 As soon as I walked into the ranch house though, and Betsy greeted me with a warm hug and delight, “You’re here! I am so glad!” I knew that my head was right. Bruised heart or not, it was time for me to return to a place where Richard and I found such joy in the restoring/re-storying work.

“Do you want to see the garden?” Betsy asked.

Did I ever. When we walked through the interpretive center and onto the new deck, and I saw the flagstone patio just as we had envisioned that gathering spot, and the wide beds of heritage perennials lining the back of the ranch house and then the meadow with its waving grasses, the cliff gardens with their strata-like lines of local limestone that Richard helped the crew of interns lay out, the sagebrush growing thick and the woodland garden still in bloom, my heart swelled. I think one of its cracks healed a little. 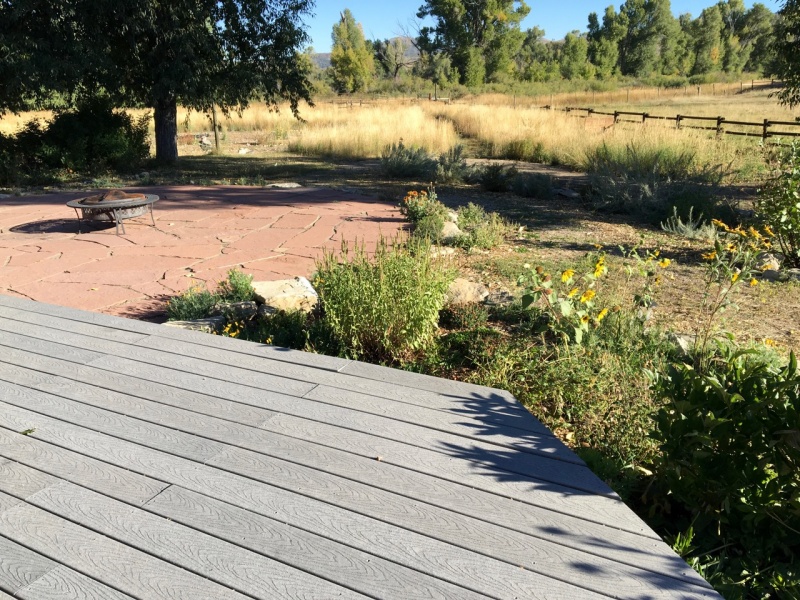 The garden from the deck of the interpretive center, with the meadow in the distance

“It’s not finished,” Betsy said. “And it’s not exactly the way you drew the plan.”

“But it’s beautiful!” I said. “Our idea was for it to evolve naturally.”

We walked the paths curving through the natural gardens and I admired the rock “creek” channel with its sculptural cairns, and the round pollinator garden beds with their river-channel-like cobble designs. Betsy showed me the wild yampah, the plants honoring the Ute Indians, the first people of the valley, whose lives revolved around harvesting the starchy and nutritious root of the staple plant for whom the river and the valley are named. 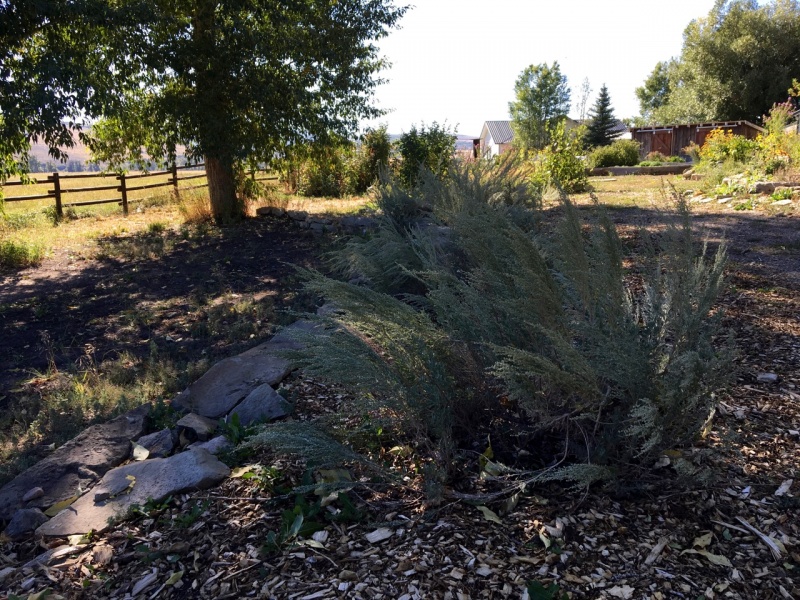 The cliff garden with native shrubs including sagebrush; in the background is the edible garden

We looked at the edible gardens and talked about what plants to add to the medicinal herb garden…. As we were walking back to the house, Geoff, Betsy’s husband and the ranch manager, saw us and came over with a huge smile on his face. “You’re here!” He gave me a hug. “We’ve missed you.”

Then my friend Connie Holsinger, also staying at the ranch for Crane Days, came out, a smile on her face. She introduced me to her friend Joyce, visiting from Boston, and later to two other friends from Boulder. That evening, Betsy and I took her grandson to the family crane activities at a nearby ranch and watched flocks of sandhill cranes fly overhead at sunset, calling in their throaty, unforgettable voices.

The next day, while the other guests went to other Festival activities, I stayed in the garden, giving tours and digging out invasive weeds. That evening, after the barbecue and talk by prominent birder and author Ted Floyd, I sat on the stoop of the bunkhouse and listened to the distant murmur of cranes and geese, and watched thousands of stars appear in the black night sky. 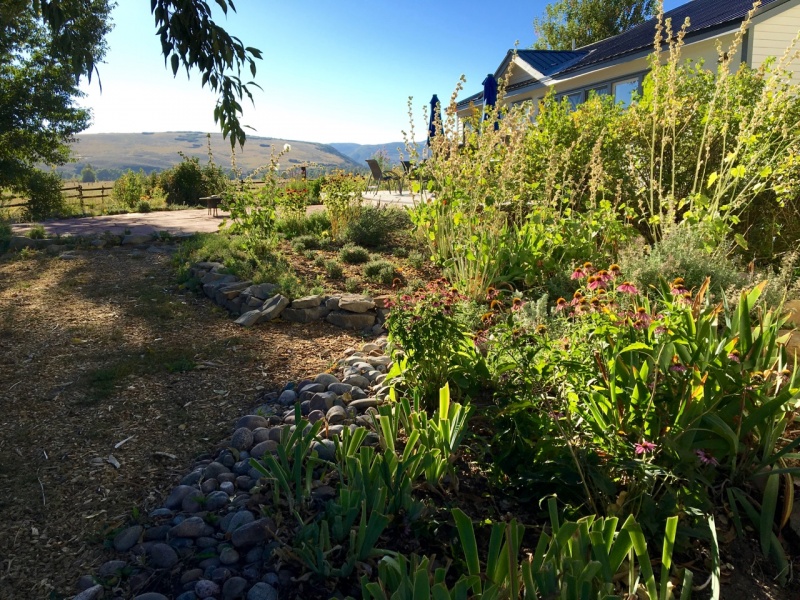 Part of the heritage garden, with medicinal and ornamental plants from historic ranch gardens

And knew I had truly come home to Carpenter Ranch and the project that Richard and I began seven years ago. There is still work to be done–including designing and installing interpretive signs telling the stories of the plants and the land, and I’m now ready to continue with that.

It feels right to be back, and to carry on the work that gave us such joy and satisfaction during the last years of Richard’s life. I would say it’s like completing a circle, but really, it’s continuing the larger circle of life itself, one that never ends as the molecules that make up our individual lives are recycled into new beginnings, over and over.

Thanks to Betsy and Geoff and The Nature Conservancy for welcoming me home, and to Connie for making the whole project possible. On we go, cranes and yampah and sagebrush and cows and Richard’s spirit–all of us together in this continuing wheel of existence… 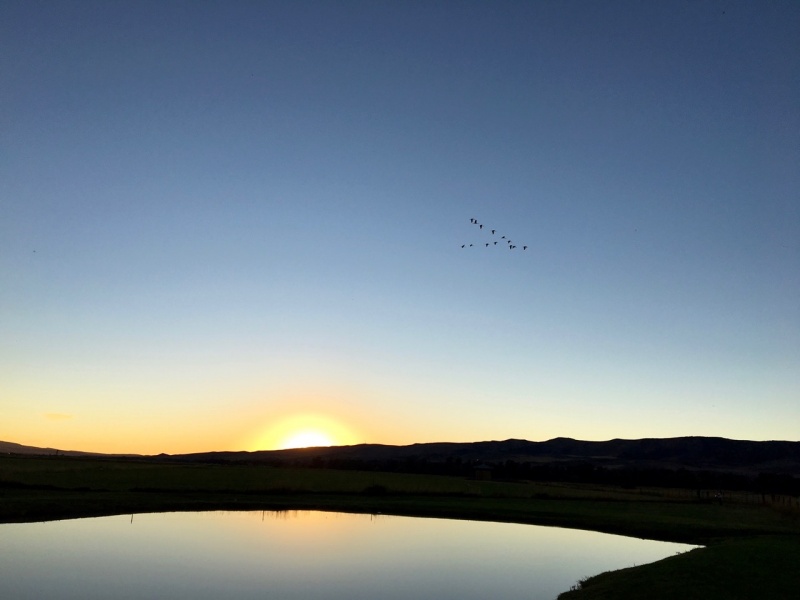