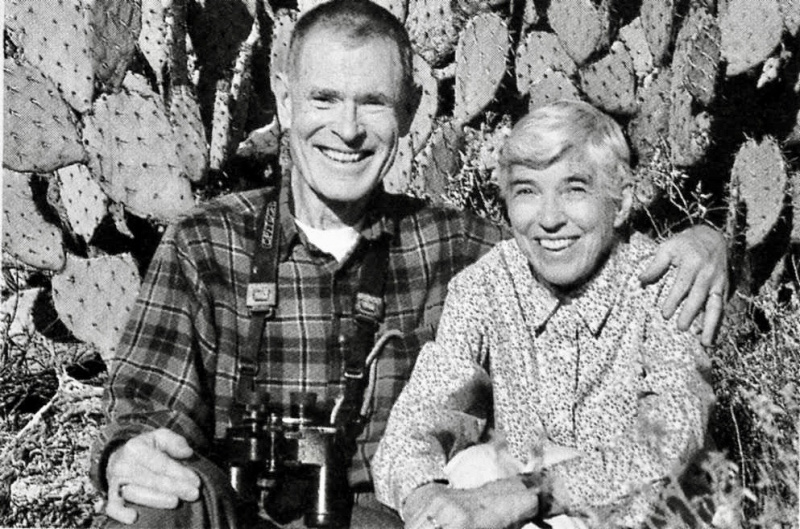 I saw my first Curve-billed Thrasher of spring yesterday, that yellow eye bright, curved beak raking the soil for insects to eat. I've been thinking about my dad, Bob Tweit, ever since. (That's Dad and Mom, Joan Tweit, in the photo above, in their native habitat in the Sonoran Desert near Tucson.) Dad studied Curve-billed Thrashers, their lives, habits, and their taxonomy–in fact, he wrote the monograph on Curve-bills for Cornell University's Birds of North America series.

(It's really more correct to say that he and Mom co-authored it, since while he did the research for that monograph and all of his other research papers, and then wrote a rough draft, it was Mom who revised those drafts, adding color, depth, and clarity, making the whole readable. She was credited as co-author on later papers.)

My dad took up birdwatching when I was too young to realize what that meant. He and Mom were interested in all things nature. The collection of Peterson Field Guides on the bookshelf testified to their omnivorousness: volumes on rocks, wildflowers, insects, stars, seashells, amphibians and reptiles, mammals, animal tracks, fish, and birds. The drawers of the surrounding cabinets were filled with neatly labeled and organized rock specimens, seashells, and found animal bones.

When my brother, Bill, began to focus on birds at about age seven, Dad followed, and even Mom turned her musician's ear and perfect pitch to learning bird songs and calls. 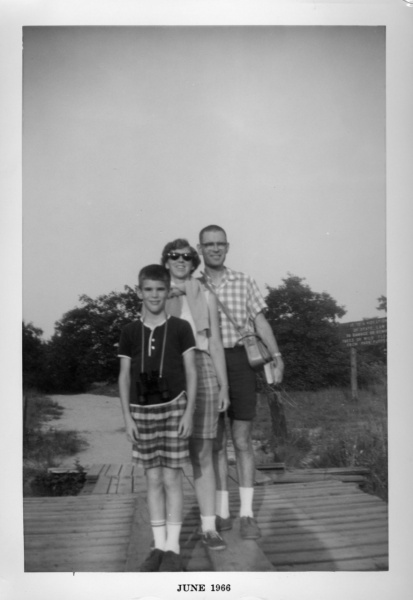 The birdwatchers in Florida (photo by me using my Brownie box camera!)

Which left me the odd girl out. Plants were my people, as I write in my memoir-in-progress, Bless the Birds:

I enjoy birds; they’re just not my life’s passion. As I have maintained since childhood, when I was periodically dragged out of bed before dawn to trek to some sewage lagoon where a rare Red-Legged Hoo-Ha had been spotted, birds get up too early and, unlike plants, they don’t hold still so you can easily identify them.

I was outnumbered. Our family vacations were soon shaped by the pursuit of new bird species. While 3/4 of the family had their binoculars up, watching the latest sighting avidly, I usually had my nose in a book. I didn't mind watching birds when they flew past, but the quest to see all of the bird species known from North America (that number is 993 according to the American Birding Association) did not light a fire in my soul as it did for the rest of my family, especially Dad and Bill.

I remember one summer vacation day when I was 14 and hadn't yet learned to drive. On a lonely stretch of US Highway 50 in Nevada,

Dad positioned my hands on the steering wheel as the camper rolled along, "Keep us on the road," he said.

Then he stuck his head out the driver's side window and turned his face up to the sky, binoculars in hand. Like a mirror image, my brother in the passenger seat put his upturned head out his window and scanned the heavens as well.

… We cruised along across a wide-open desert basin on a deserted two-lane highway, my hands on the steering wheel and my eyes on the road, my dad's foot on the accelerator, his eyes on the sky. I was perched on the engine case between the two front seats; Mom, in the dinette at the rear of the camper, was engrossed in a book. The sky was clear blue and the air rushing in the open windows was so parched I could feel it sucking the moisture from my skin.

I don't remember what species of hawk he and my brother were searching for, or even whether they spotted one. But I can still recall the feel of the steering wheel, thrumming with the vibrations of hte tires on the asphalt; the sweetly turpentine-like pungence of sagebrush on the air; and the sight of the empty highway unrolling in front of us.

Joy soared through me. I felt weightless, the way I imagine their hawk might feel when a rising bubble of hot air buoys its outstretched wings, flexing feather and bone as it carries the bird upward.

When Dad retired from a career in a chemistry lab developing medicines, he and Mom took up volunteering in national parks and monuments, and Dad took up bird research. He got his banding license, and began to capture birds with mist nets set up in their Tucson backyard, which they had restored to native desert and mesquite bosque. They also began to travel more widely, eventually visiting every continent except Africa and Antarctica, looking for new birds along the way. 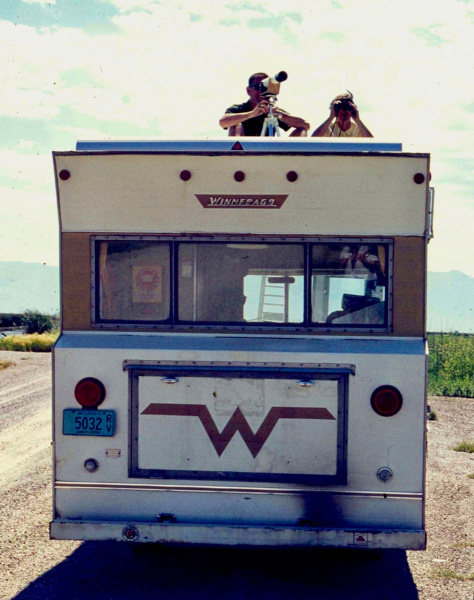 Dad and Mom watching waterbirds at Bear River National Wildlife Refuge in Utah, using a camper as their "blind."

Late last September, when Dad was in hospice care at my brother and sister-in-law's house, I helped with his care near the end. When he felt like talking, I encouraged him to tell me stories about his childhood, and about his and Mom's travels.

One afternoon, I found Dad gazing up at the wall opposite his bed. I asked if he was looking at the watercolor painting of Yosemite Valley by my great-grandmother, JV Cannon.

"No," he said, his tone patient, as if instructing me, "Look higher."

I did, and all I saw was the plaster where the wall joined the ceiling.

I looked again, but saw only the walls and ceiling.

"It's got long wings," Dad continued. "It's black with white patches underneath its wings."

I knew this was a quiz. I took a wild guess: "Is it the Harpy Eagle you were telling me about last night from your trip to Venezuela?"

"Harpy Eagles are gray," he said in a tone of disappointment, and I knew I had failed. Dad waited a moment, and then said, "It's a California Condor. You and Richard saw them on Big Sur."

"Of course." I found myself trying to figure out how the largest bird in North America, with a nearly ten-foot wingspan, could soar in the confines of a nine-by-twelve foot room. "I'm glad the condor came to visit you."

"Yes." Dad nodded, and his gaze continued to track the huge bird, a smile on his face.

I sat with him until his eyes closed, and then went to the kitchen. Later, I told my brother about Dad's hallucination.

I take comfort from the idea that one of Dad's birds came to visit, soaring with him as his spirit soared from this world to the next. I'm sure he and Mom are together again, Dad's binoculars around his neck, his hand in Mom's, and her ears cocked for whatever birds are singing. 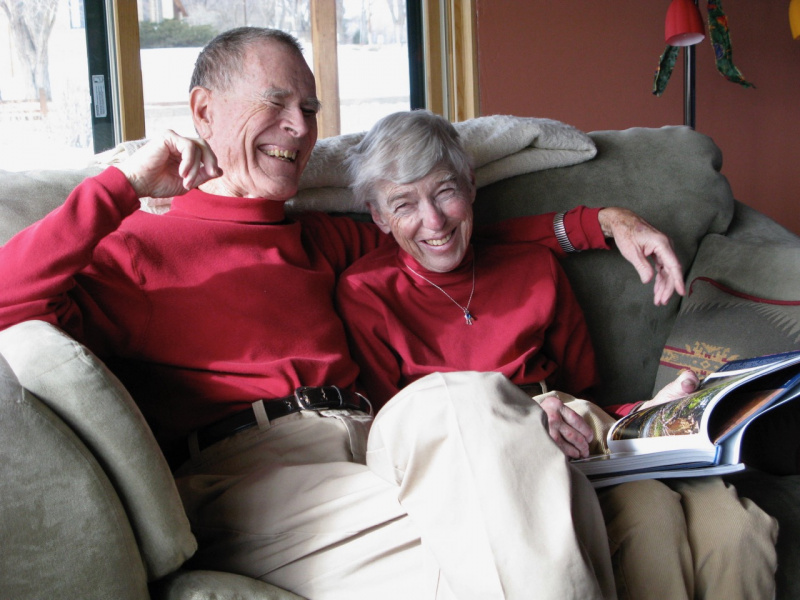