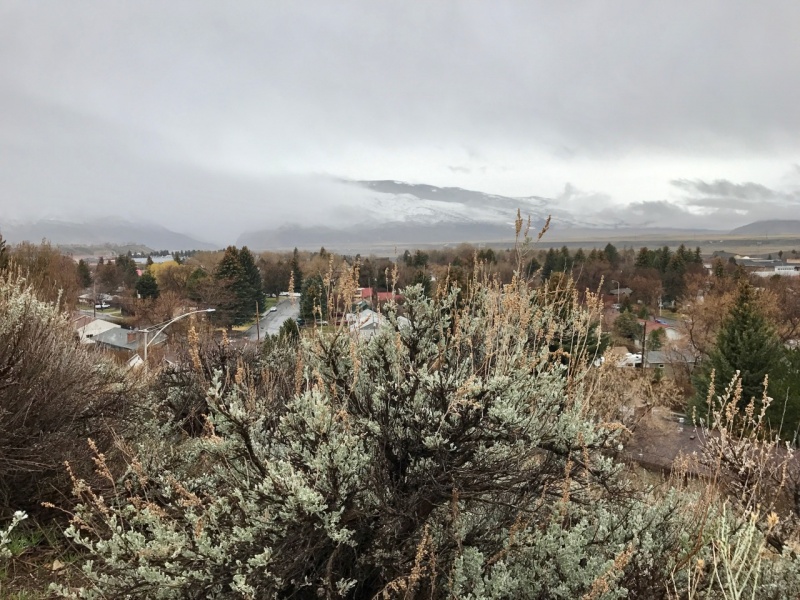 Today, in typical spring-in-the-Rockies fashion, the weather pivoted 180 degrees from yesterday’s sixty-five and sunny, into freezing rain, mist, sleet, snow, and then steady rain again. When I walked to the Post Office just a few minutes ago, the temperature was hovering just above freezing, and the cloud-blanket was beginning to clear, revealing new snow on the hillsides just above town.

This kind of weather that makes me want to curl up on the couch and read. With that in mind, here are capsule reviews of two books that crossed my desk recently. The two are very different: one is memoir/nature writing of the best sort, thoughtful and insightful, and the other is crackling good fiction. What they share is that both books stretch boundaries, shift perspectives, and teach us things we didn’t know we needed to know. Which is what makes each a great read. 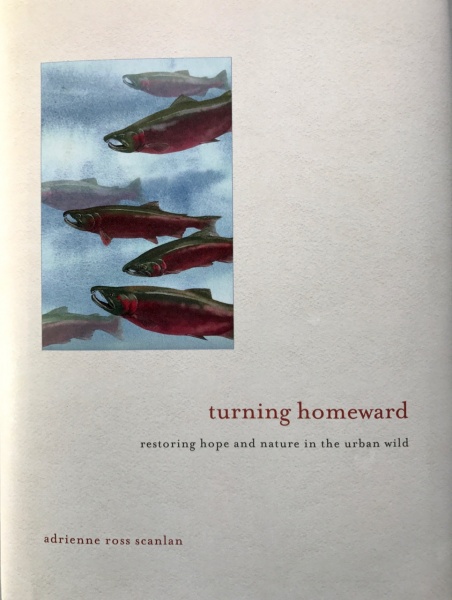 As a girl growing up in the suburbs of New York City, Adrienne Ross Scanlan watched her father with the other men at Temple Zion, white prayer shawls over dark suits, “swaying and chanting their prayers.” At home, she watched a different kind of movement as the tremors and other neuro-motor impacts of Parkinson’s disease robbed her father of the ability to “rise from his Naugahyde recliner, walk into a room, hug his daughters, talk and laugh with friends…”

After her father died, Scanlan, by then an adult, sold her belongings, quit her job and moved West for a new start. She wound up in Seattle and began searching for her own form of healing in volunteer work to help restore the region’s iconic salmon runs. She understood it as a way to practice the Jewish tradition of tikkum olam, a term that translates as ”repair of the world.”

Turning Homeward chronicles what Scanlan learns about the complexities of both mending the world and living as a thoughtful and conscious human being. Her meditations on the meaning of tikkum olam, and the meaning of restoration in nature and in daily life apply to all of us. How can we as fallible human beings live with our flaws and the hurts we intentionally or not inflict on each other and the world? How do we live with the knowledge that even at our best, we cause pain and suffering, simply by being? We all eat, for example, and in the doing, we consume other lives. Even if we eat a purely plant-based diet, we eat plant embryos as we consume grain and beans, and plant flesh in roots like carrots or leaves like spinach. How do we atone for those impacts, unwitting or not?

For Scanlan, the answer is in practicing tikkum olam, consciously working to repair the world in whatever form we are called to:

The call to repair is genuine, arising from our best selves, I like to think, the part of all of us capable of acknowledging the harms we’ve crated without shrinking away in guilt or fear. There’s no end to the damage we caused, just as there’s no end to our curiosity, our capacity for good work, our intelligence, and our compassion. The reasons for despair are everywhere and profound. What’s lost does matter. So does what’s still here and what’s still possible. … Tikkun, I’ve come to learn, isn’t identified by intentions but by the impact of what we hope are reparative actions.

Turning Homeward is a work of thoughtful atonement. Scanlan writes honestly and tenderly about what has not worked in mending her life, and the lives of salmon and urban streams, as well as what has. And out of despair at the havoc we have wreaked on this earth and each other, a quiet sense of hope grows in her words, the kind of active expectation of the results of conscious work that can in fact, lead to mending the wounds of the world and we humans. 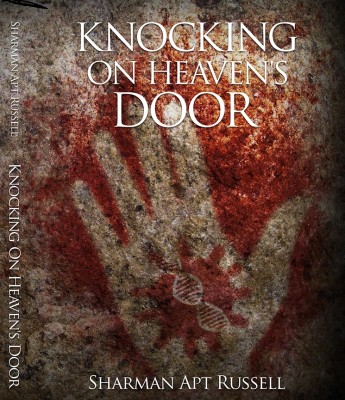 Clare breathed in the smell of blood. Sharp, metallic, in the air, on her skin. She slipped her knife into the space between the joint and bone of the mare’s hip—a small young female but still too much meat, more than enough for their next few days of hunting. Tonight she and Jon would feast on the rump with garlic and onion, some saltbush leaves, perhaps a mint paste… Clare felt happy thinking about her dinner. She felt…lust. A fervent yearning. Her mouth filled with saliva. A violent tenderness. Her heart expanded, blossomed, pressed against her ribcage so that she mewled without sound, kittenish. She slunk forward, barely in control, through the grass…

No, no, these were not her thoughts.

“Cat! Cat!” Clare yelled and stood, dropping the knife, picking up her spear from the bloodied ground.

It is the 23rd Century, about 150 years after a supervirus has wiped out almost every human being on Earth. The few survivors have recreated a “utopian” paleolithic hunter-gatherer lifestyle imbued with animism, informed by New Physics, and linked by solar-powered laptops (solarcomps) via the worldwide web.

Clare and her tribe live in New Mexico, moving with the seasons, feasting on abundant plants and wild game, and celebrating the cycles of nature. The only animals they do not hunt are the “paleos,” once-extinct Paleolithic species reintroduced before the virus, creatures like the saber-toothed cat who intruded into Clare’s thoughts and nearly killed her and her hunting companion at the beginning of the book. Many paleos are telepathic; as Clare says, “How could you hunt someone you could talk to?”

A widow whose young daughter died six years before, Clare has found comfort and meaning in teaching creative writing to students from around the world via the worldwide web. Now, one of her students, a younger man from her own tribe, has become her lover. Clare’s life seems settled, until she is assigned to serve as quest-guide to Brad, a “lab rat” and theoretical physicist who lives in the relative comfort of what remains of the Los Alamos National Laboratory complex.

Brad, who discovered The Theory of Everything and whose mathematics describes how life could exist in “quantum non-locality,” as holographic projections of actual cells. Brad, who has put off the required quest as long as possible, who prefers to think math in his office rather than hunt and sleep outdoors. Brad, who initially becomes interested in Clare simply a woman who might bear his children.

The quest the two set off on becomes so much more than a simple journey, bringing up classic conflicts: a life close to the earth versus a life of the mind, technology versus nature, organized society versus loners who live outside the culture, intuitive and sensory knowledge versus intellect, man versus woman. The story twists and turns through the landscape, through lives, through physics and Brad’s risky experiment to win Clare as his own. The choices the two humans make in the aftermath of that experiment will shape their future and that of their people.

Science fiction generally doesn’t interest me, but Knocking on Heaven’s Door sucked me in and kept me hooked, immersed in a culture and characters I hadn’t imagined I wanted to know. Sharman Apt Russell’s imagined future manages to be both utopian and also startlingly contemporary, relevant and illuminating to our lives and choices today.

Two excellent reads, thanks to two authors unafraid to reach deep, think way beyond the norms, and explore the world, in very different ways. Happy reading!