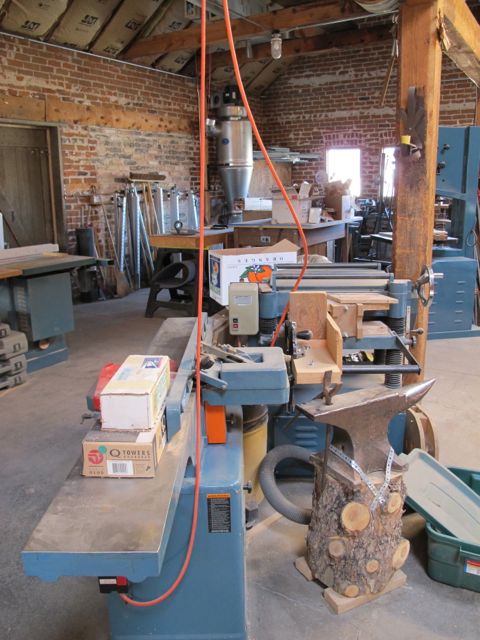 I’ve never claimed to be Tool Girl. Back in college, my housemates prohibited me from playing with power tools. As I recall, a small incident with a reciprocating saw and one of my fingers precipitated the ban. Both recovered, though the finger required a few stitches.

It’s not that I’m clumsy or incapable; I lost much of the feeling in my fingers and toes to Raynaud’s. If I don’t watch where they are relative to implements of destruction, my digits can get into serious trouble before I notice anything.

As a result, I’ve sailed through adult life without much involvement with tools outside the kitchen–while being married to a guy who knew and loved every kind of tool I could imagine, and many more that I couldn’t. (If there’s a tool commonly used for carpentry, furniture-making, tin-smithing, sculpting granite, and simple blacksmithing that’s not in Richard’s studio, I’ll be surprised.)

If something needed designed, modified, attached, detached, re-sized, re-engineered, or built, he did it. Elegantly and economically. I watched and admired from a safe distance. 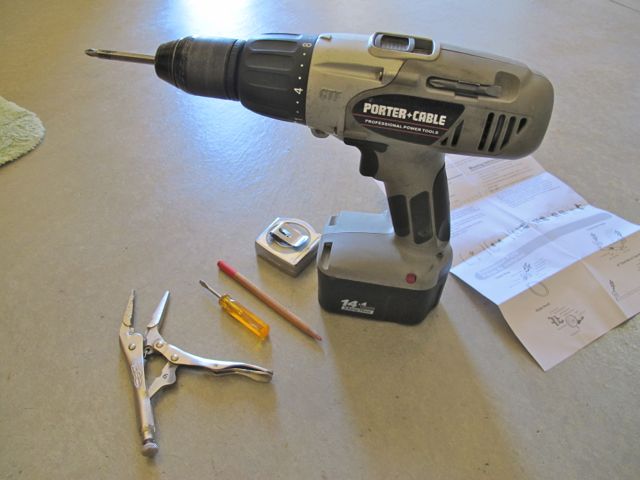 Richard’s drill and one of his many pairs of vise grips, but that’s my tiny screw driver and tape measure!

He’s gone now, and has been since November 27th. And–most of you won’t be surprised by this–I’m the stubbornly independent sort. So I’m slowly teaching myself to use his tools.

Last week, after an embarrassing incident where I found the right tools to repair the broken faucet sprayer in the guest cottage kitchen but couldn’t make them work and got the wrong parts–I decided that I would pick a really simple project to practice my competence. (Fortunately, my neighbor knew just how to fix the faucet sprayer. Thanks, David!)

So when I went to the hardware store to return the faucet-sprayer parts I didn’t need, I bought a towel ring for the master bathroom. (Just because Richard could do everything from build a house to sculpt a granite firepit didn’t mean he always finished the doing….)

Back at home, I raided Richard’s shop for tools, read the instructions, tapped the wall to locate a stud, marked where the mounting plate would go, and then decided to test-fit the assembly before drilling. It didn’t fit. I looked at the instructions again, placed the parts just where the drawing showed. No dice. The assembly wouldn’t fit on its own mounting bracket. Huh.

I took the two pieces out to Richard’s shop where our contractor friend, Bob Spencer, and his son Harry were framing in the wall for the new bathroom. (Thanks, guys!) Bob looked at it and suggested filing the slot in the mounting bracket to make the two fit. I looked at Richard’s box of files, and found my attention straying to the next box over with miscellaneous wrenches and pliers. 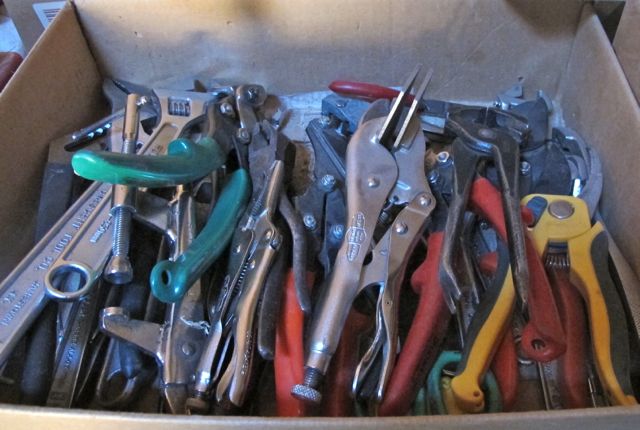 I spotted a pair of vise-grips with a slender snout. Those gave me an idea: bend the top of the bracket so the towel-ring assembly would slip over it.

I took vise-grips and bracket inside, fastened the former to the latter, and bent the bracket slightly. Then tried slipping on the towel ring assembly. Close, but not quite. I bent the bracket a bit more: Success!

Feeling flush with my re-engineering effort, I hefted Richard’s cordless drill in one hand, positioned the bracket and the first screw on the wall with the other–and proceeded to slip and nearly drill my leg. Okay. Try two. Nope.

I looked at the drill. Its rotation direction was set to unscrew, not screw. Oh. I reset it, hefted the drill again, repositioned screw and bracket and–ta da! In went the first screw. A little too tightly. I reversed it carefully until it wasn’t smashing the bracket into the wall. And then picked up the other screw and installed it on the first try. 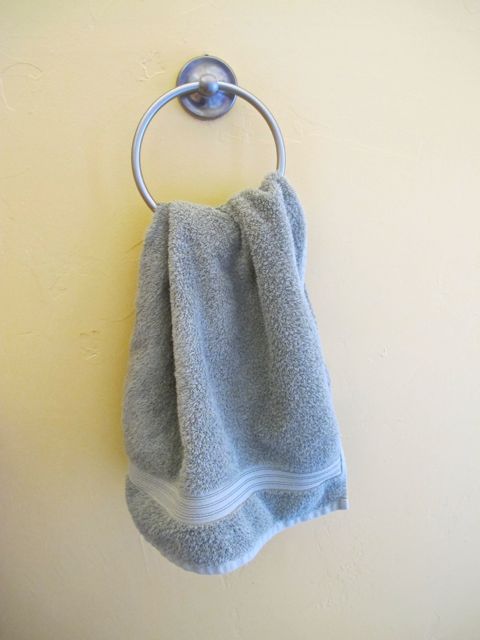 I slipped the towel-ring assembly over the bracket, tightened the set screw, and stepped back to admire my handiwork. Perhaps it took me four times as long as it would have Richard, but still, I was pleased.

I’m pretty sure I heard him chuckle as I walked out to his studio to put the tools back.

*****
BTW, the phrase “tool girl” comes from my friend and fellow writer, Susan Tomlinson, who IS Queen of Tool Girls. Check out her blog. It’s worth the read.