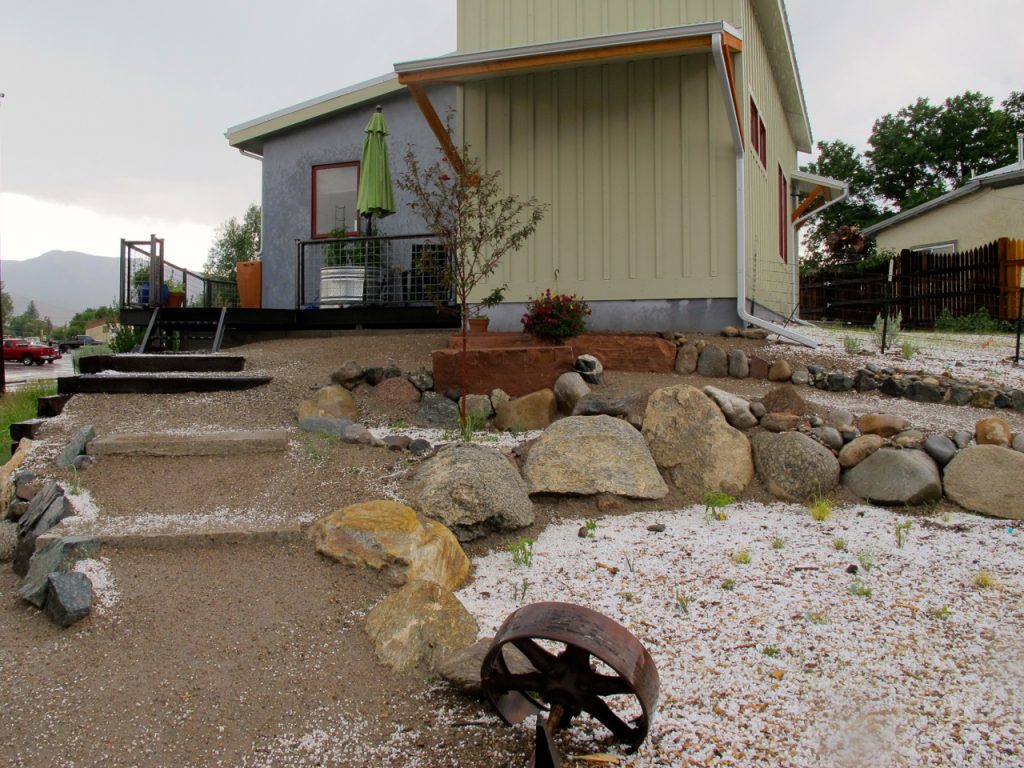 I live in a small house by choice. I like compact spaces and I like living simply. I also want to be comfortable, efficient with energy and materials, and happy in my space. And after living for almost 29 years with a sculptor who could and did design and build anything, I’m picky about details.

So even though my little house and its companion garage/studio were finished last year, I’m still completing a few projects. Today’s was a combination of design and whimsy.

Streetside view of the blank wall in a hailstorm last July

My house faces south to harvest the sun’s heat in winter, so it’s sideways to the street with a tall blank wall on that side. Tom Pokorny, my inspired designer, specified a window in that wall. That window got nixed because of noise issues. Instead, we added a Craftsman-stye porch roof over a sandstone bench.

Only there was still too much blank wall. I decided it needed a faux window–my little joke, the window that’s not a window–and asked my glass guy, Steve Duhaime, another amazing designer, if he had any junky wood window frames lying around.

He did. I hauled home a shabby frame about six feet wide by three feet high, divided into three lights. I sanded it down, added brackets to reinforce joints long since warped in our dry climate, and screwed it to the wall above the bench. Then I painted it red to match the existing doors and windows.

Still, it needed something more. While I was inventing back-splashes of galvanized sheet steel for the galley kitchen in Treehouse, my studio, I realized what that something was: window boxes.

Not just any window boxes, mind you—ones that honored the industrial history of the place. I measured and thought, and then drew up plans for three simple galvanized sheet-steel window boxes.

Last September, I took the plans to Janet at Johnny Berndt & Sons, a local fabrication shop. “No rush,” I said. “Just ask Ken to make them when he has time.”

Window box interior with drain hole, and at top, the lip that they hang from.

She called last week to say they were ready. All they needed were drain holes. I drilled those this morning, and then fitted my glorious new window boxes on their faux window frame.

It’s too early to plant, so I took apart the big wreath I had hung up for the winter holidays, and filled the boxes with its fragrant juniper and fir greenery.

I was so pleased with myself, and it was so warm in the sun against that wall that I took my lunch outside and ate on the sandstone bench under my new window boxes.

Window boxes in place and full of fragrant wreath greens

I’ve thought a lot since having to learn power tools and carpentry in order to finish the big house about what it is that is so satisfying about acquiring this basic competence with building and designing. Every time I finish a project, no matter how simple, I am ridiculously pleased with myself, as if it’s a huge achievement.

The truth is, it is a huge achievement. I never so much as picked up a power tool before Richard died. He was so completely and elegantly competent at using tools, designing with wood, stone and steel, and building anything from a hand-operated crane to heft boulders to a whole house, that I never tried to learn. My efforts would have been painfully slow and clumsy by comparison.

Richard with “Matriculation,” a sculpture, and the hand-crane he invented and built

Nor did I grow up with that competence. My Norwegian granddad Olav, a mechanical engineer and the only one in my small family who could design and build, never considered teaching me to use his tools. And I, the good girl, never asked.

Now it’s just me, and while my efforts may be slow and clumsy, they work. That I can cut and mill lumber, work with steel, and design things like custom window boxes that actually look and function as I imagined is a huge source of pride for me. I didn’t know I could.

This “tool girl” work has expanded my sense of me, of possibilities. (Thank you, Susan Tomlinson, for the phrase and for your example!)

That sense of possibilities is what is so satisfying: there is more to me than I realized. I like knowing that. 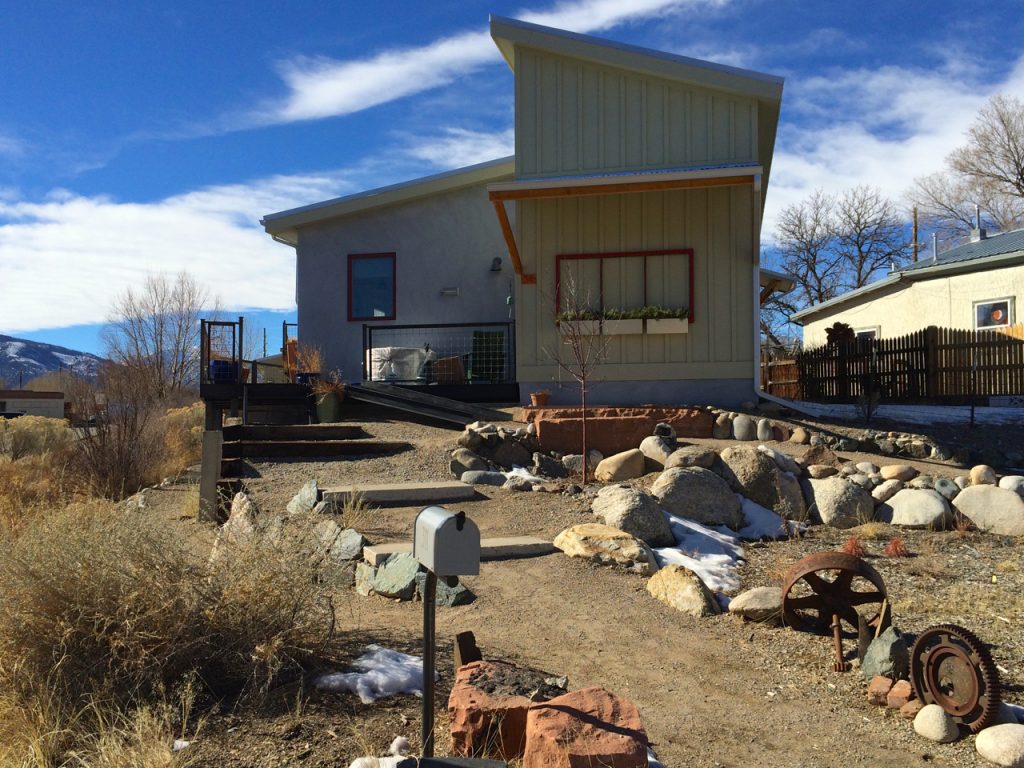 Those window boxes and the red faux window make the wall a human scale and make me smile….