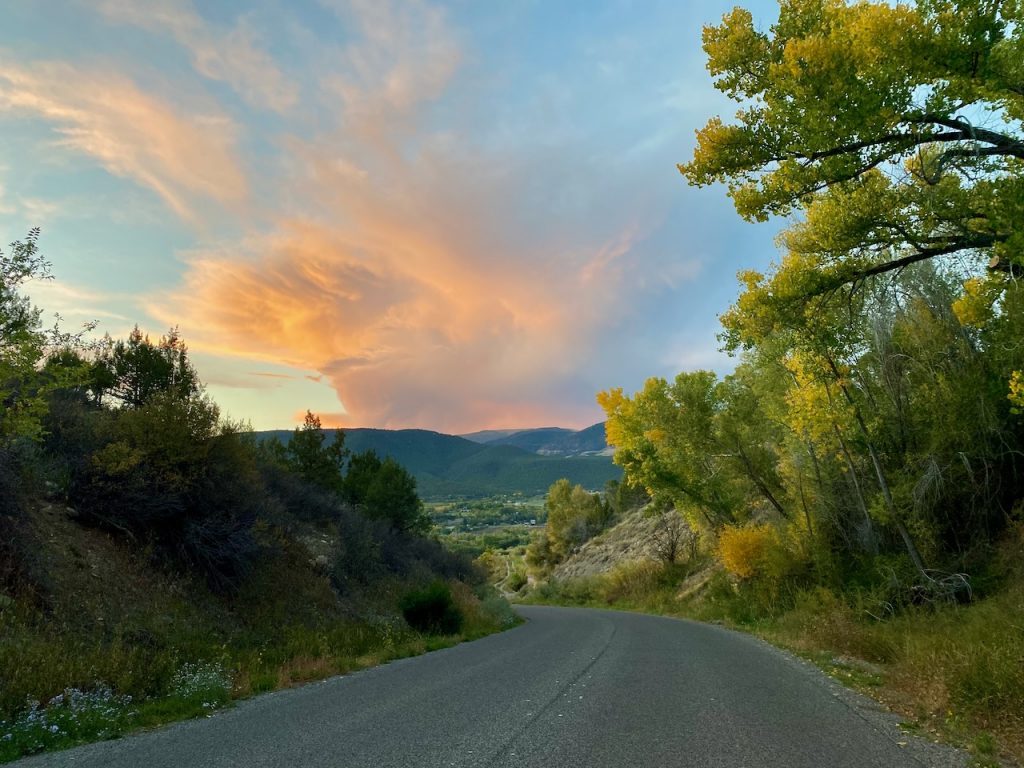 Driving home the other evening, I stopped in the middle of the road to shoot this photo, because it captures what I love about this place I’ve landed after a decade of wandering. The valley, greened by water harvested from the surrounding peaks and mesas, is a patchwork of orchards, organic farms, and vineyards. The small town of Paonia nestled along the North Fork of the Gunnison River. And above, the still-mostly-wild landscapes of Grand Mesa and the West Elk Mountains.

It is that mix of healthy cultivated land and wild land that draws me, the lively small town, and the Guy nearby. And the sweet 1920s bungalow I bought, with its forest-glade backyard and cozy interior.

The yard and house need some work, but not a major re-storying project. Just polishing what is here, and shoring up some of the sagging bits. Nothing huge or scary.

Today, for instance, the Guy brought a chainsaw over, and we cut down and removed some of the sickly and spindly trees in the backyard forest that has become too crowded, and took out a few limbs that needed pruning, including the large crabapple branch weighing down the electric line.

I started the backyard tree removal project yesterday with my trusty hand-saw by removing the ash tree that had been allowed to grow horizontally right across the alley entrance to the garage. I think that snake-like tree was seeking light, but honestly, it wasn’t a healthy growth habit. (Also, I want to use that driveway!)

Removing it left me with a big pile of ash limbs to turn into chippings, ie, mulch for the yard.

In the front yard, I hand-sawed a whole thicket of root sprouts–some as tall as 12 feet–from base of the big cottonwood trees. Now you can actually see the front of the house from the street.

I also planted several clusters of peony tubers and daffodil bulbs, which meant digging through six inches of gravel mulch and three layers of landscape cloth to make planting spots. And I planted two pots of native pollinator flowers to brighten up and add instant habitat to the gravel yard.

Last week, the wonderful crew at Empowered Energy Systems installed solar panels on my south-facing roof.  They’re now hooked up to the power grid, so I’m generating my own clean electricity.

Inside, I’ve already gotten started on my part of the most difficult renovation project: digging out a passage under the floor to access the aptly named crawl space under the floor beams. Last weekend I spent a sweaty morning digging construction debris and loose dirt out of a small hatch in the dining-area floor, and carefully wheeling four loads of debris and dirt out of the house.

Sometime next month, my intrepid contractor, Jerry Fritts, will slide in, crawl over, and jack up the floor beams sagging under the weight of a quartzite-topped breakfast bar installed by the previous owner. In 1920, when the house was built, floor beams were not engineered to support the weight of rock-slab counters. Carefully jacking up the beams and putting support columns under them will give that old wood floor another 80 years of life!

In the midst of all of this, I’ve settled in, making the house my home. Here’s a quick tour, with before and after photos:

The former owner used the front porch as a dining room.

I chose a different use.

The living room/kitchen area used to be HGTV metro modern.

I’m more a southwest-style cottage person myself. I placed my dining area between the living room and the kitchen.

Running a writing conference, and then turning to my own writing.

Next week, I drive to Oklahoma City for Women Writing the West’s 28th Annual Conference: Red Earth Voices–We All Have a Story to Tell. I’m teaching a landscape and language pre-conference workshop with my writing comadre, Dr. Dawn Wink, and helping to run the show. It’s going to be an inspiring and amazing three days, with keynote speakers Jeanetta Calhoun Mish, novelist Laura Pritchett, and memoirist Amy Irvine, plus tours of the new First Americans Museum and National Cowboy & Western Heritage Museum, craft workshops, agent and editor pitches, roundtable critiques, the annual WILLA and LAURA awards, and much more.

It’s not too late to sign up for the conference, if you or someone you know wants to join a vibrant and welcoming community of women writers!

After the conference, I am home for the winter, and will finally be able to truly settle in and write. I can’t wait. Blessings to you all!

22 thoughts on “Settling Into Home”