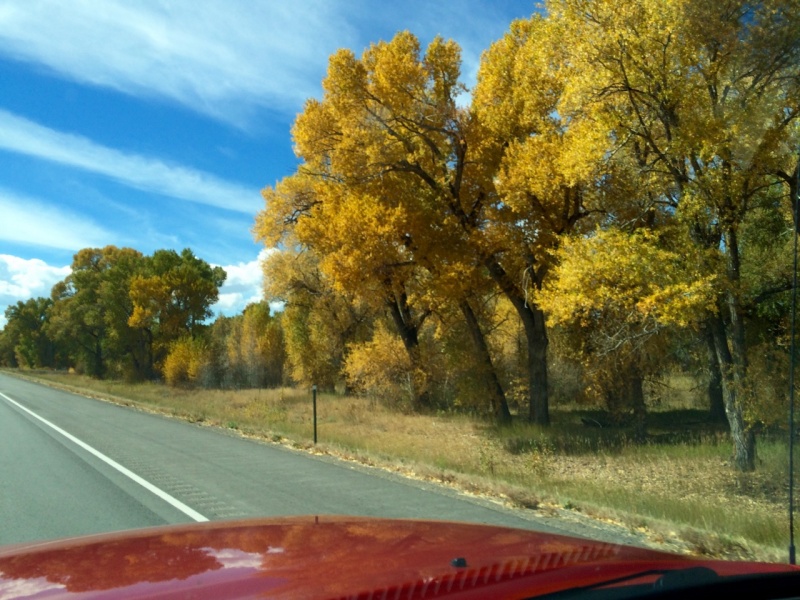 Last Thursday morning, I drove out of Salida in Red, aimed 572 miles south for Silver City to speak at the Southwest Festival of the Written Word.

It was a glorious fall day, with blue skies and warm temperatures, the kind of weather that makes me feel like hitting the road and never stopping, which of course I can’t do because I don’t actually have that kind of stamina. (The photo above shows the blaze of color in the cottonwoods as Red and I crossed the Alamosa River near Antonito, Colorado, in the southern end of the San Luis Valley.)

The landscapes I love showed off their fall colors: rabbitbrush in autumn yellow contrasting with purple asters, and aspen leaves splashing the mountainsides with gold and orange. I sang along with Sting, Lyle Lovett, Dar Williams, Emmy Lou Harris, and Rosanne Cash. And I thought about writing and nature and why I do what I do for my talk.

Four hours along, I stopped at Santa Fe Community College to see my hermana de la corazón, Dawn Wink, head of Teacher Education at SFCC and author of the novel Meadowlark, and her sweetie, Noé Villarreal.

An hour with the two of them sped by so fast, I was late leaving for Albuquerque, where I was due to spend the night with friends who once lived nearby in Westcliffe and then Colorado Springs, but have since moved to Albuquerque, luckily for me and my trips south. 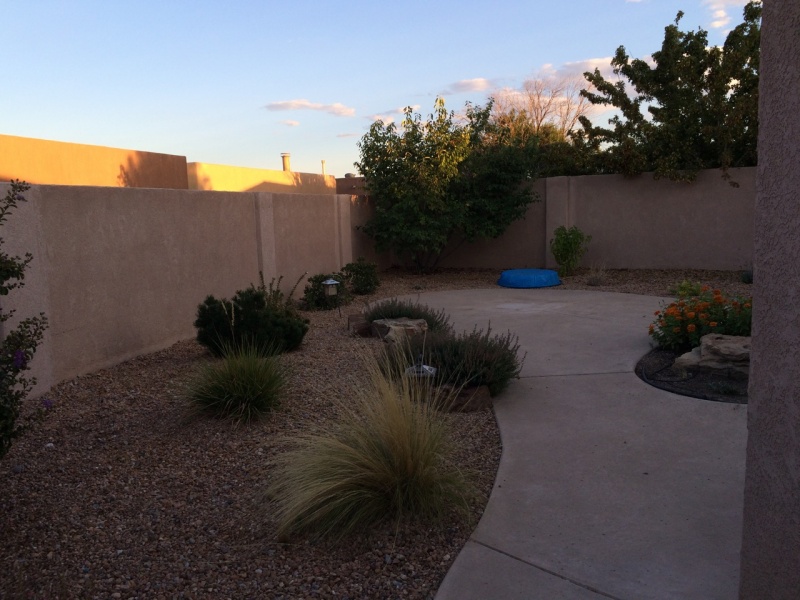 I made up for my tardiness by giving Doris and Bill ideas about how to jazz up the walled yard at their new place, which has good bones, but could use more diversity and interest. I do love playing with plants!

The next morning I hit the road again for the remaining four-and-a-half hour drive to Silver City, first heading south down the Rio Grande Valley, a rift valley lined with skinny desert mountain ranges, and then heading west to wind up and over the Black Range of the Gila Mountains, on a two-lane that is so curvy it is not at all fast, but is quite fascinating as it ascends from creosote-bush desert to desert grasslands with tall sotol, to oaks and then junipers and piñon pines, and then into cool mountain forest, and then back down through those life-zones again on the other side. 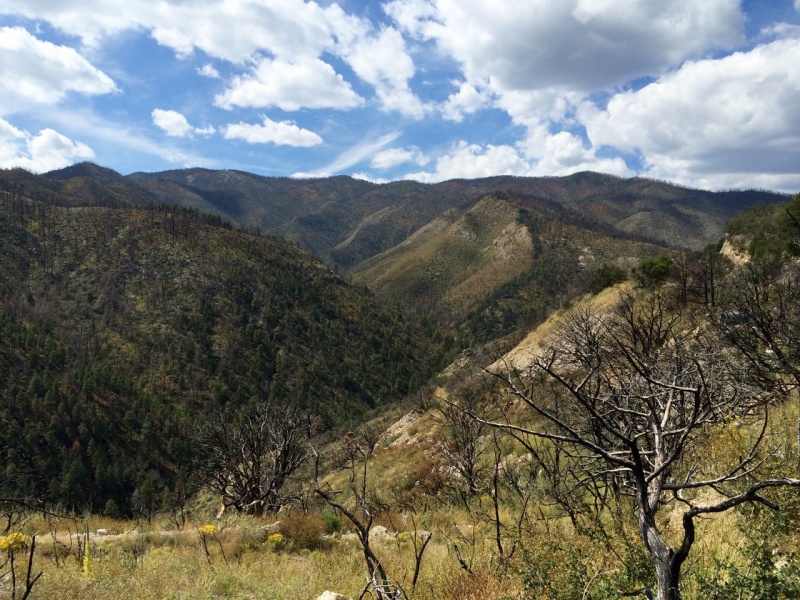 The road also goes right through the area of the Black Range Fire, which roared hot and huge over those high ridges two years ago. I was thrilled to see the steep burned slopes were thigh deep in native grasses and wildflowers, the native plant community rising phoenix-like from the ashes of what had been a truly scary fire. 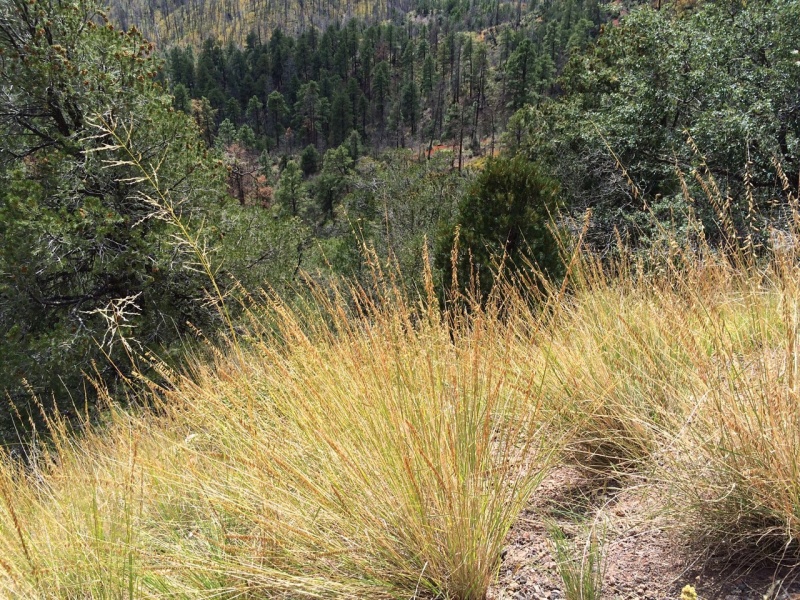 I reached Silver City that afternoon in time to check into my very comfy room in the wonderfully restored Art Deco Murray Hotel, and then to go to a talk by Sharman Apt Russell, one of the most thoughtful writers I know. (I’ve reviewed several of Sharman’s books on this blog, including Theresa of the New World, a magical-realism novel about the daughter of a Spanish Conquistador; and Diary of a Citizen Scientist, about Sharman’s adventures learning tiger beetles and field science.)

I’ve known Sharman for more than two decades, but we rarely end up in the same place at the same time, so after her talk we walked and talked, and then talked and ate dinner, catching up on our lives and our writing.

Yesterday (was that just yesterday?) was my talk with author and environmentalist Susan Zakin, whose time in Madagascar and Africa, among other places, has shown her the dark side of global capitalism and its affect on this world and human culture. 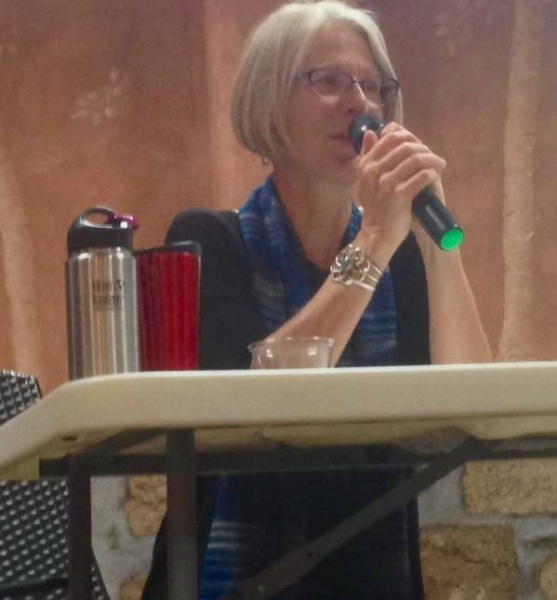 There I am talking… (Photo by Susan Zakin–thanks, Susan!)

I talked about the power of restoring nature at home as a way to reconnect we humans to our health and to the community of the land; Susan Zakin talked about the globalization of environmental issues. As it turned out, we were really talking about the thing from different angles; we complimented each other’s points beautifully.

(If you’ve not read Susan Zakin’s books, start with Coyotes and Town Dogs: Earth First! and the Environmental Movement. It’ll make you laugh, groan, get angry and make you think, often all in the same chapter.)

Sharman was our moderator, and after the enthusiastic audience finally let us go, the three of us headed to lunch and continued our conversation. That kind of connection is exactly why I would drive a thousand-mile round-trip in four days to go to a well-run writing festival. And the Southwest Festival of the Written Word is definitely a well-run and inspiring experience, from the programs and presenters, to the book sales and the venues.

I capped off my at the Festival by going to hear my dear friend Denise Chávez, that afternoon.

La Honcha (we were co-honchas–heads–of the Border Book Festival back when Richard, Molly and I lived in Las Cruces) read/performed from her newest novel, The King and Queen of Comezón, a salute to lust and love and the itches that continue to trouble us to the ends of our lives. Comezón is funny, lewd, frank, and poignant, a wonderful ramble of a tale that only Denise could come up with.

After hugging Denise on last time, Red and I hit the road again, headed east over the Black Range before turning north toward home. The view from Emory Pass over miles of New Mexico reminded me of the magic of the Chihuahuan Desert and its mountain “islands” of forest. 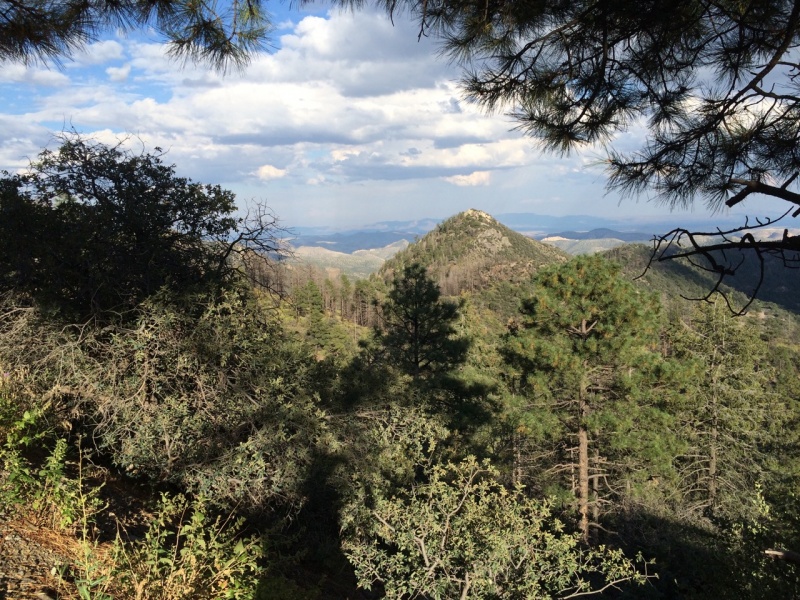 Later, the sun set in an explosion of color that only happens in the desert, where airborne dust tints the light in a particularly intense, cinematic way. 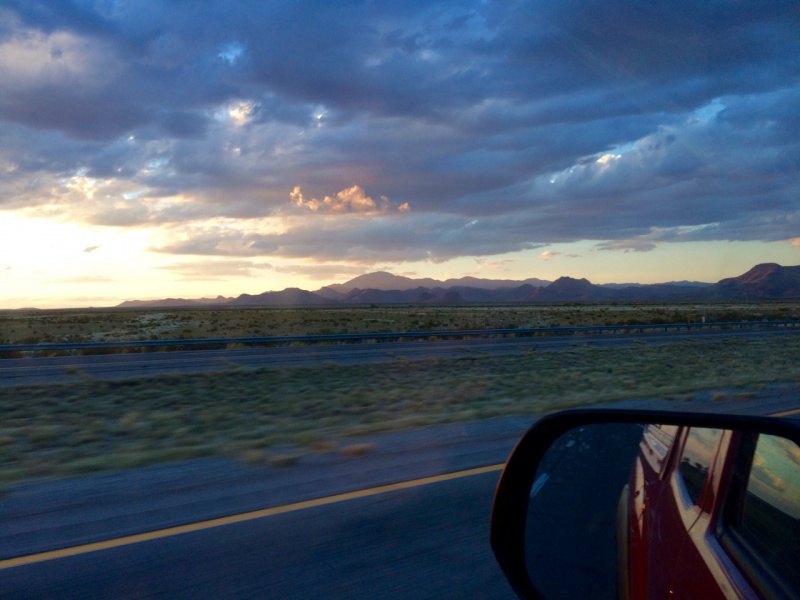 Tonight, I’m home, having driven 1,072 miles since Thursday. Tomorrow, Red and I light out again, headed west toward Redmond, Oregon for the Women Writing the West Conference and other events. I do love a good road-trip.

What I mean by that is, it fills my spirit to drive through the “Big Empty” as Susan Zakin called the wide spaces of the inland West, landscapes I find fascinating to ponder, country with horizons so wide my mind expands commensurately. Driving the long miles through these largely open spaces, I am free to think and dream and feel, to open my mind and heart to whatever is next.

I’ll keep you posted as I go…