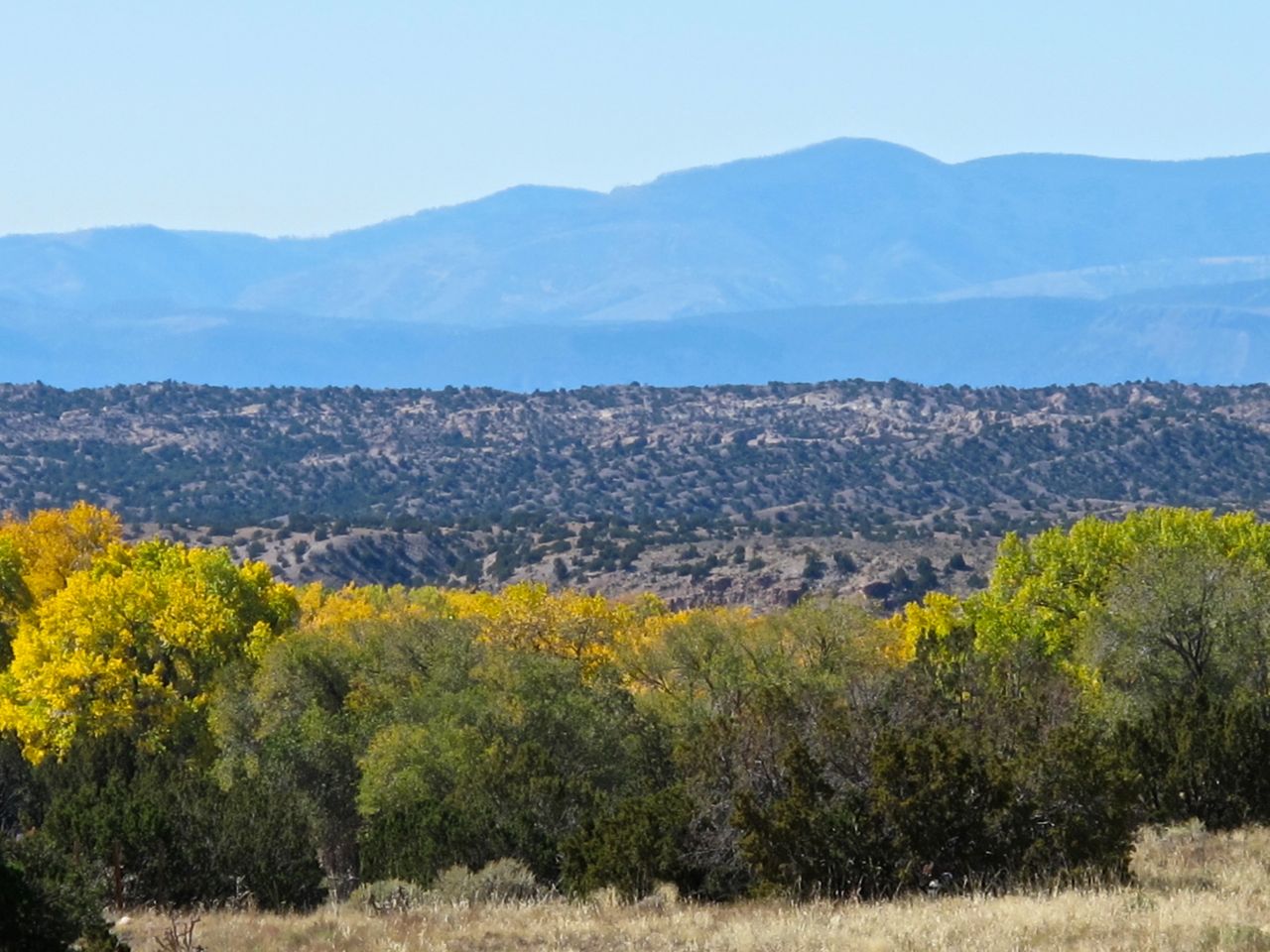 It’s been a traveling week: I’ve been to New Mexico, and then driven the Texas Panhandle and Oklahoma to northwest Arkansas. Tomorrow I hit the road for home, a two-day, 800-mile drive across the Southern Plains.

Last Thursday, I drove to Albuquerque with a stop Santa Fe, where I visited a writing class taught by writer and teacher Dawn Wink at Santa Fe Community College. I was on time until the gorgeous ribbon of golden cottonwoods in Ojo Caliente enticed me to stop and shoot “just a few” photos…. (Oops!) If it hadn’t been for the patience of Dawn’s husband, Noé Villareal, who waited for me at the main entrance quad of the college, I might never have found Dawn and her class. 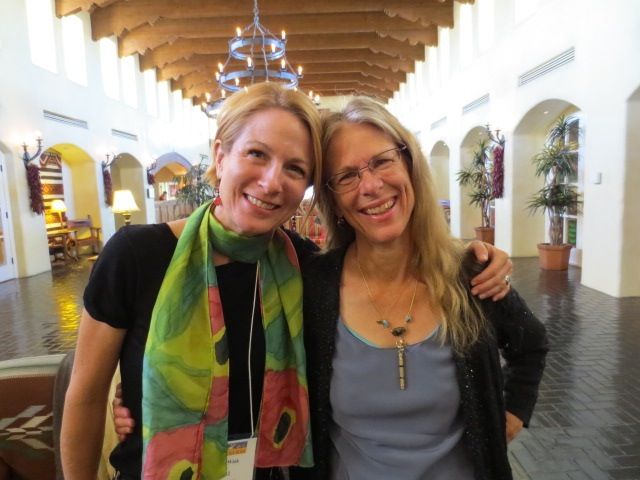 With writer and teacher Dawn Wink at the Women Writing the West Conference in Albuquerque. (Photo: Noé Villareal)

Which would have been a shame. The week before, the students had used my word-ring creativity exercise, which helped these aspiring writers representing three languages and cultures and a couple of decades span in ages, find their writing voices and confidence. Seeing their eyes light up as I talked about how and why I write reminded me. I wrestle with the terror of the blank page, I write with my heart outstretched as it were my hand because I want to open minds. I want to change the world, one heart at a time.

And meeting Dawn and Noé… You know when you meet people who feel as if you’ve known them always? It was like that.

From Santa Fe, I cruised south to Albuquerque for the Women Writing the West Conference. This group is a warm and supportive community of women who write about the West, whether the historical West or the present-day one, whether in fiction, creative non-fiction, poetry, screenplays or memoir. The conference was a weekend of connecting and re-connecting, and much inspiration. 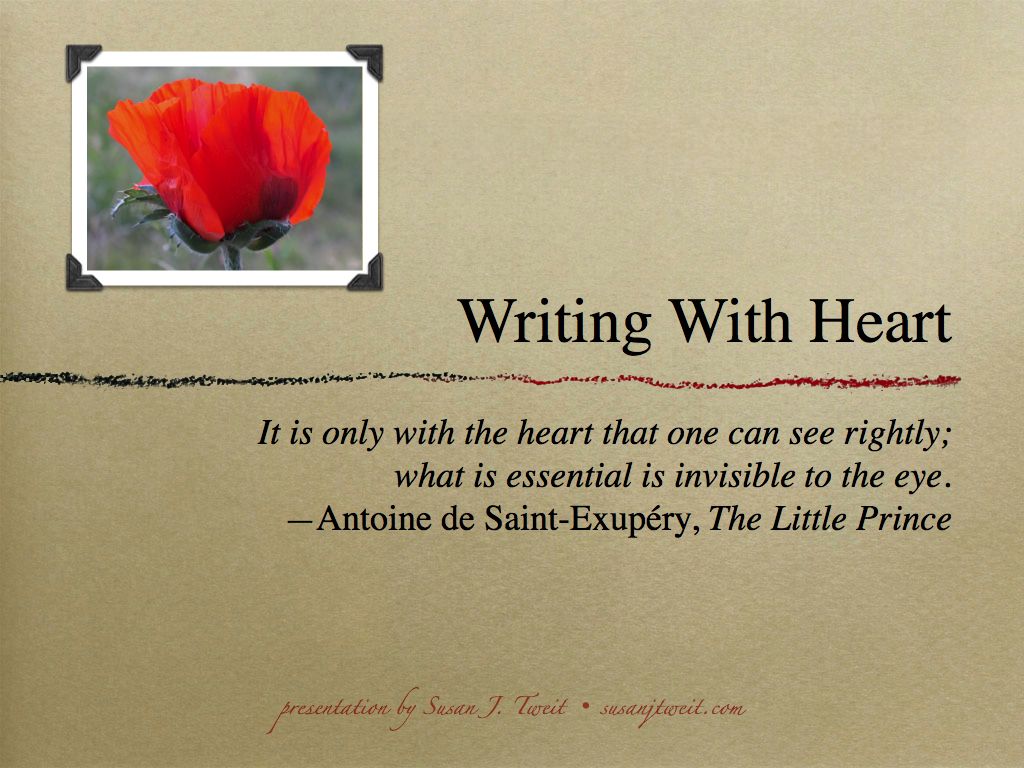 The opening slide for my keynote at the WWW conference

I was honored to give the opening night talk, “Writing With Heart,” and I’ll have a video of it to share with you before too long. (One without annoying noises!) I don’t brag well at all, so I’ll just say the reception to my talk was gratifying. In fact, I think I knocked that particular ball out of the park.

Other highlights included talks with two agents–I may be working with an agent again after many years on my own, and that’s exciting. And breakfast with Saturday night’s keynote speaker, Professor Virginia Scharff, Historian and Director of the Center for Southwest Studies, and her husband, Chris Wilson, J.B. Jackson professor in the School of Architecture and Planning. I’ve known Virginia since grad school at University of Wyoming in Laramie, where I slept on her porch one summer between jobs….

From Albuquerque, I blew east across the mesa country and the Texas Panhandle to Amarillo, where I spent the night. The next day I tacked into a fierce cross-wind across Oklahoma, and after almost nine hours on the road, made it my sister-in-law’s house in Springdale, Arkansas, sore and tired. 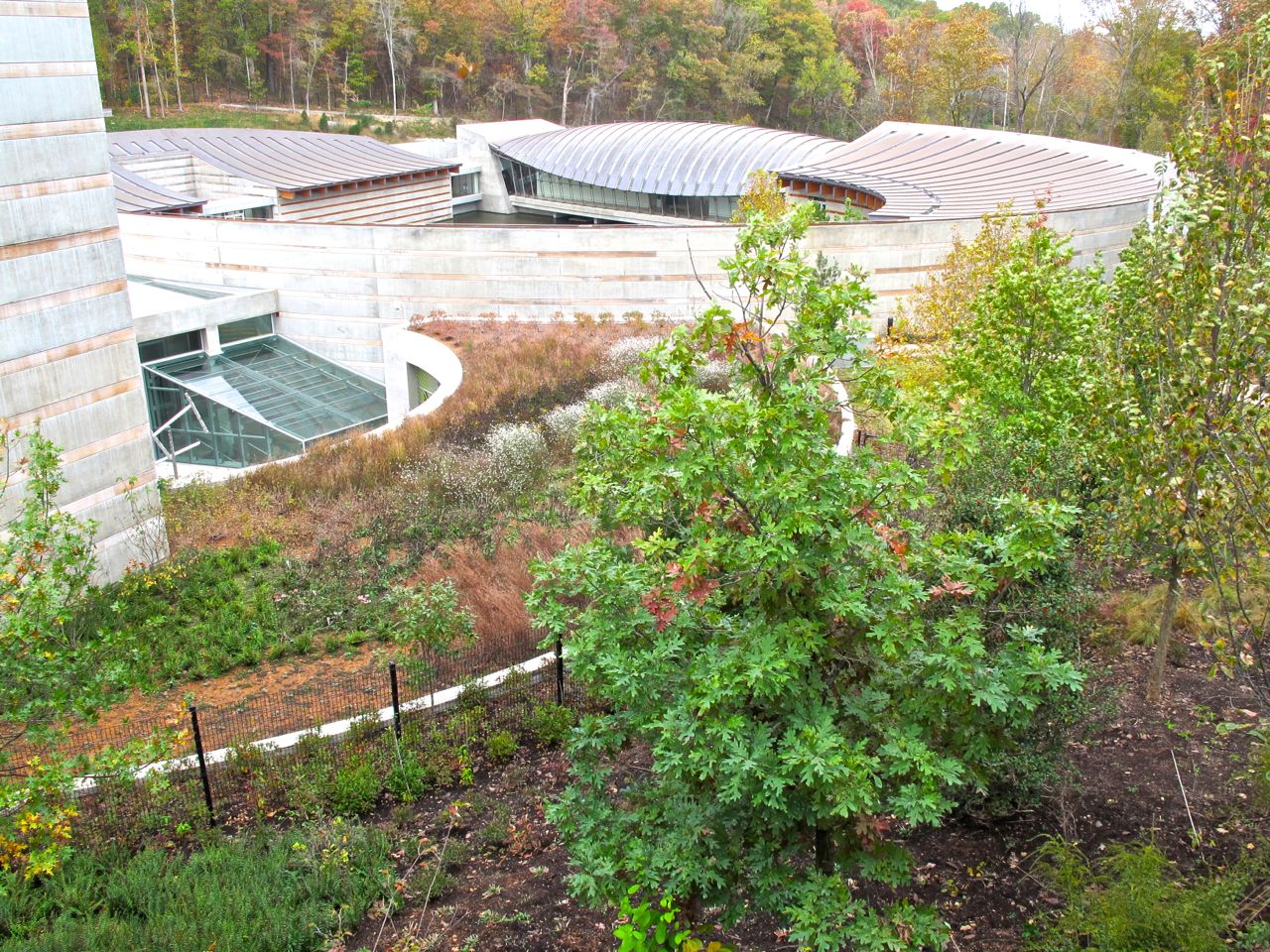 Yesterday Letitia and I wandered part of the extensive woods at the new Crystal Bridges Museum of American Art in Bentonville (otherwise known as the home of Walmart; the museum is Alice Walton’s creation). The buildings were closed, but I can attest that they and the grounds are gorgeous, designed in an organic way that compliments the dramatic site, a deep ravine in oak-hickory woods.

Today we picked up my 95-year-old mother-in-law, Miss Alice, and drove east on winding roads over ridges and down valleys colored in the crimson, gold, toffee, orange, and lemon yellow of autumn in the Ozarks to explore the west end of the Buffalo National River. Just seeing the very west end of this clear, un-dammed river winding its way through the steep ridges under thick limestone bluffs makes me want to explore more. 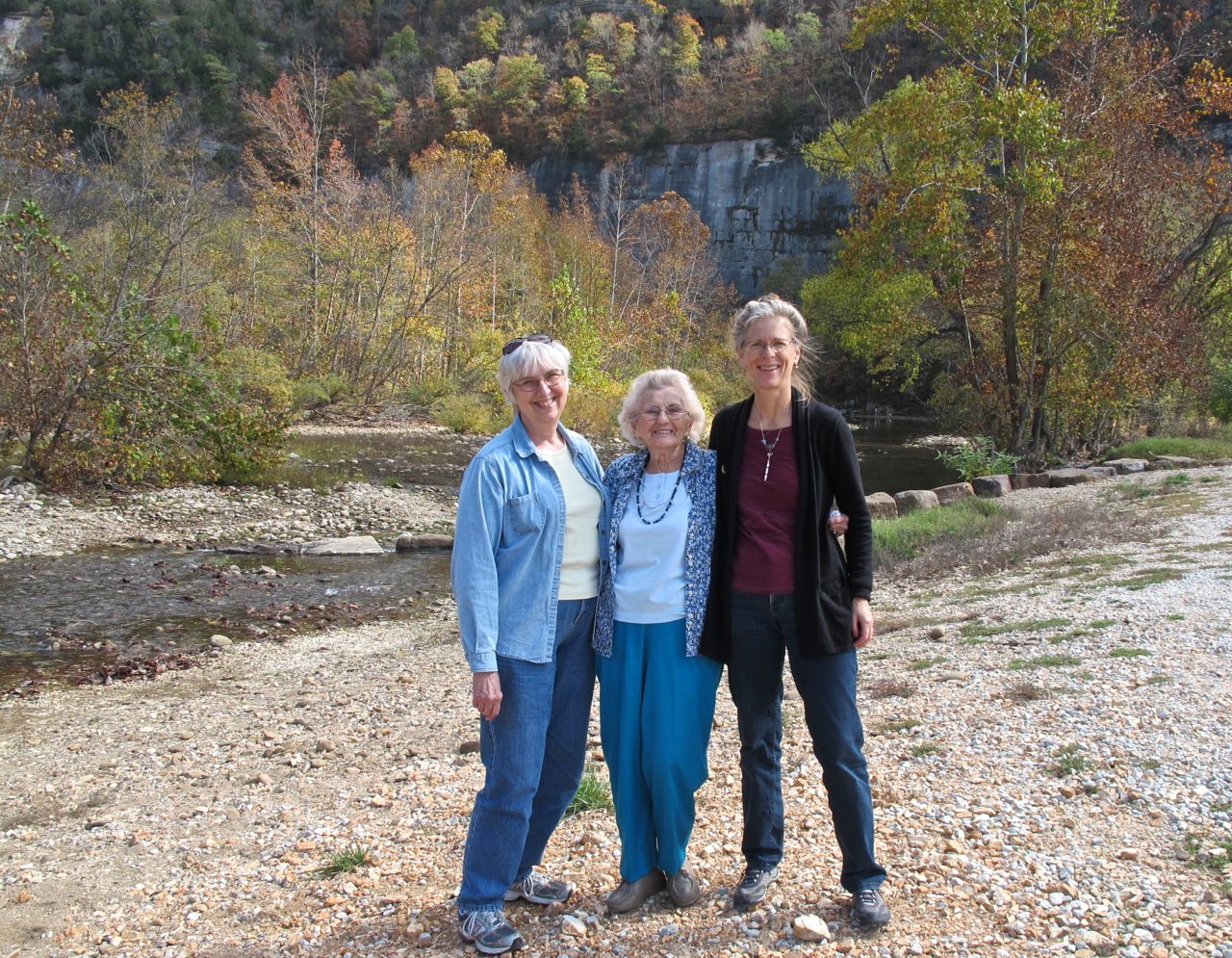 Tomorrow I’m headed home, on that two-day drive across the Southern Plains with a winter storm threatening. By the time I get there, I’ll have driven almost two thousand miles in eight days. (No wonder I’m tired.)

But look at those smiles–worth the trip, wouldn’t you say? 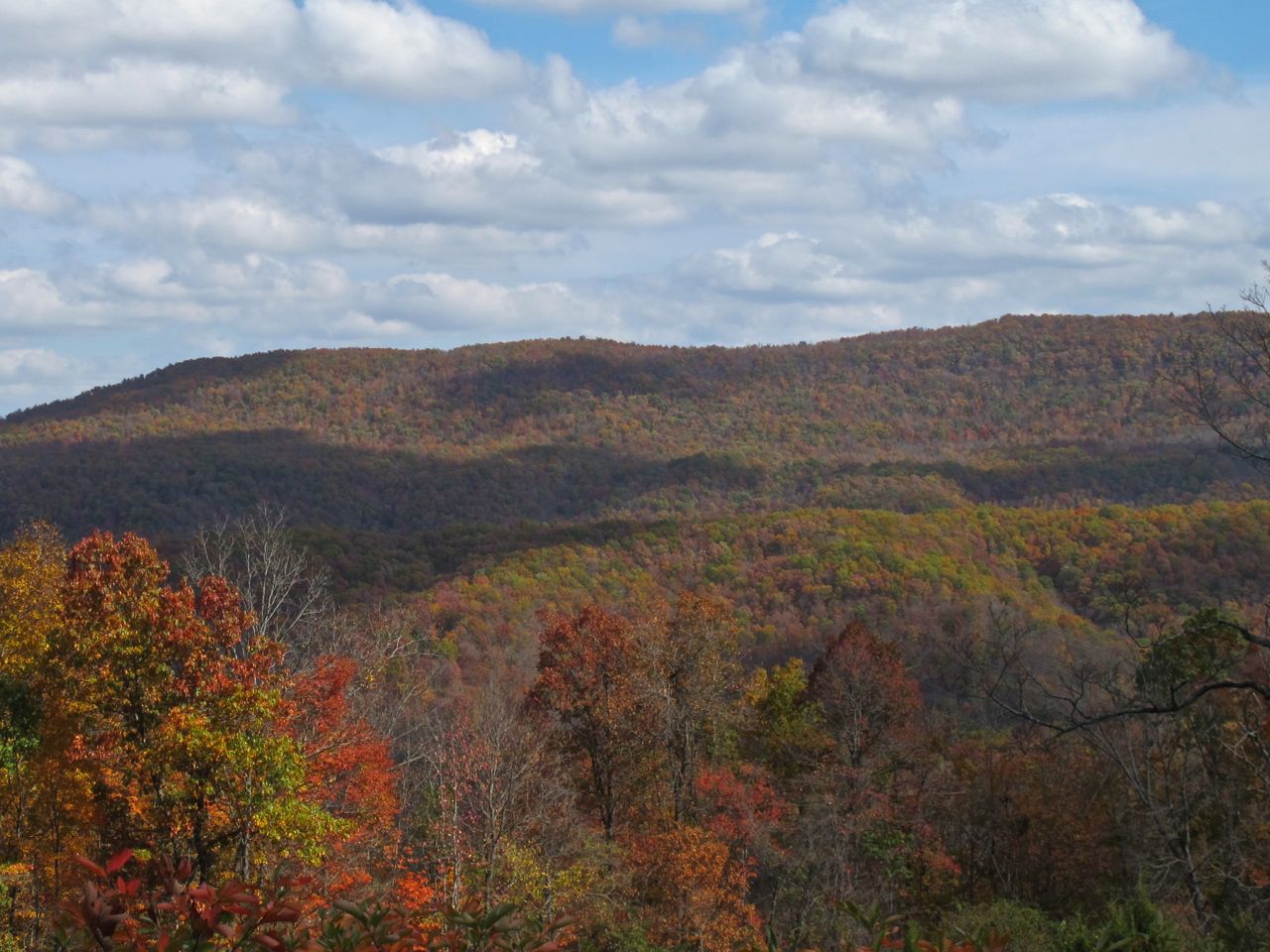