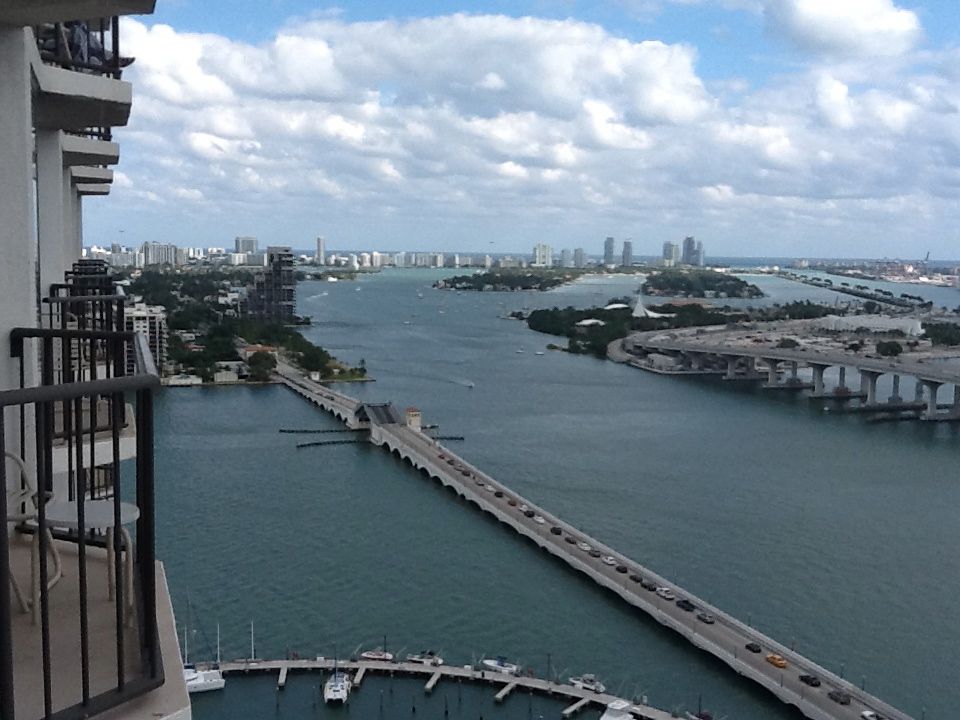 Biscayne Bay and the Venetian Causeway from my hotel room balcony (that’s Miami Beach in the distance).

Last week I was in Miami, staying in a hotel on the shore of Biscayne Bay. All I saw of South Florida was the view of the bay from my 28th-floor balcony, and the choppy water itself on the five-minute walk between the hotel and the Young Arts campus.

That twice-daily walk was a welcome break before and after the hours in a conference room reading and evaluating 140+ writing submissions in four days with my fellow writing panel members, poet David Lee and novelist Dianne Oberhansley and our coordinator, Mary Lee Adler. Each panelist read every submission, an average of 35 manuscripts read, digested, and scored each day. No wonder my brain still feels numb! 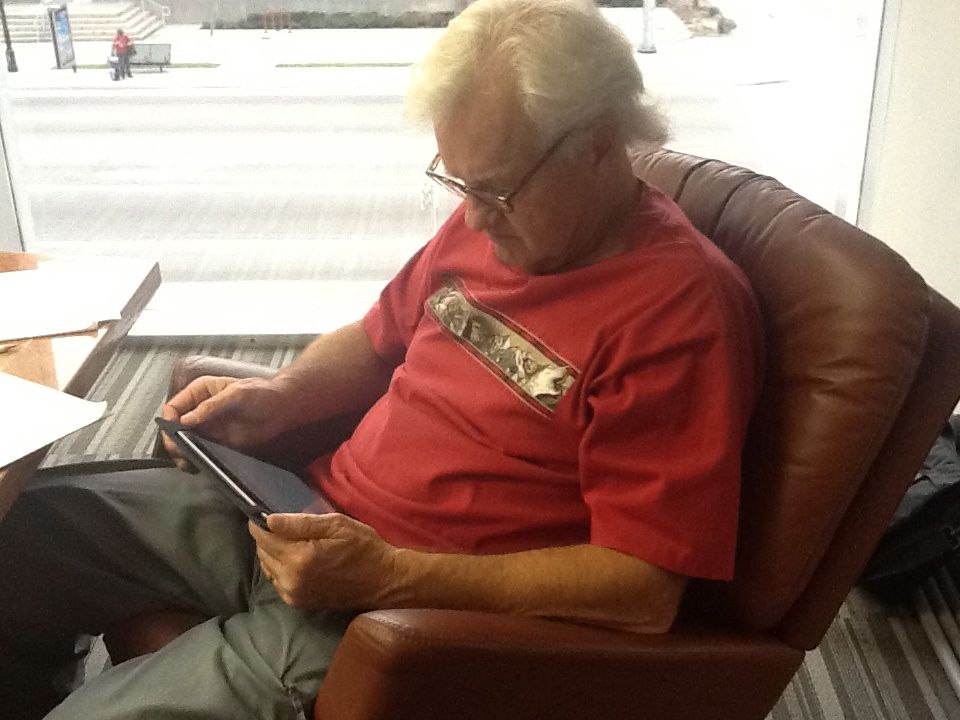 Our task was made much easier by the preliminary panel, which met the week before to read and score nearly 1,200 submissions from talented young writers across the country, whittling that enormous virtual pile down. (“Virtual pile” because this year for the first time we read digital manuscripts on individual iPads instead of literal piles of paper stored in files in stacks of banker’s boxes. Even the Luddite among us declared the iPad “pretty useful” by the end of the week. And many trees were saved.)

Our task was also made much easier by the work of the Young Arts staff, especially Letty Bassart, Joe NeSmith, Ty Taylor, and Neidra Ward in Programs, and the IT folks. 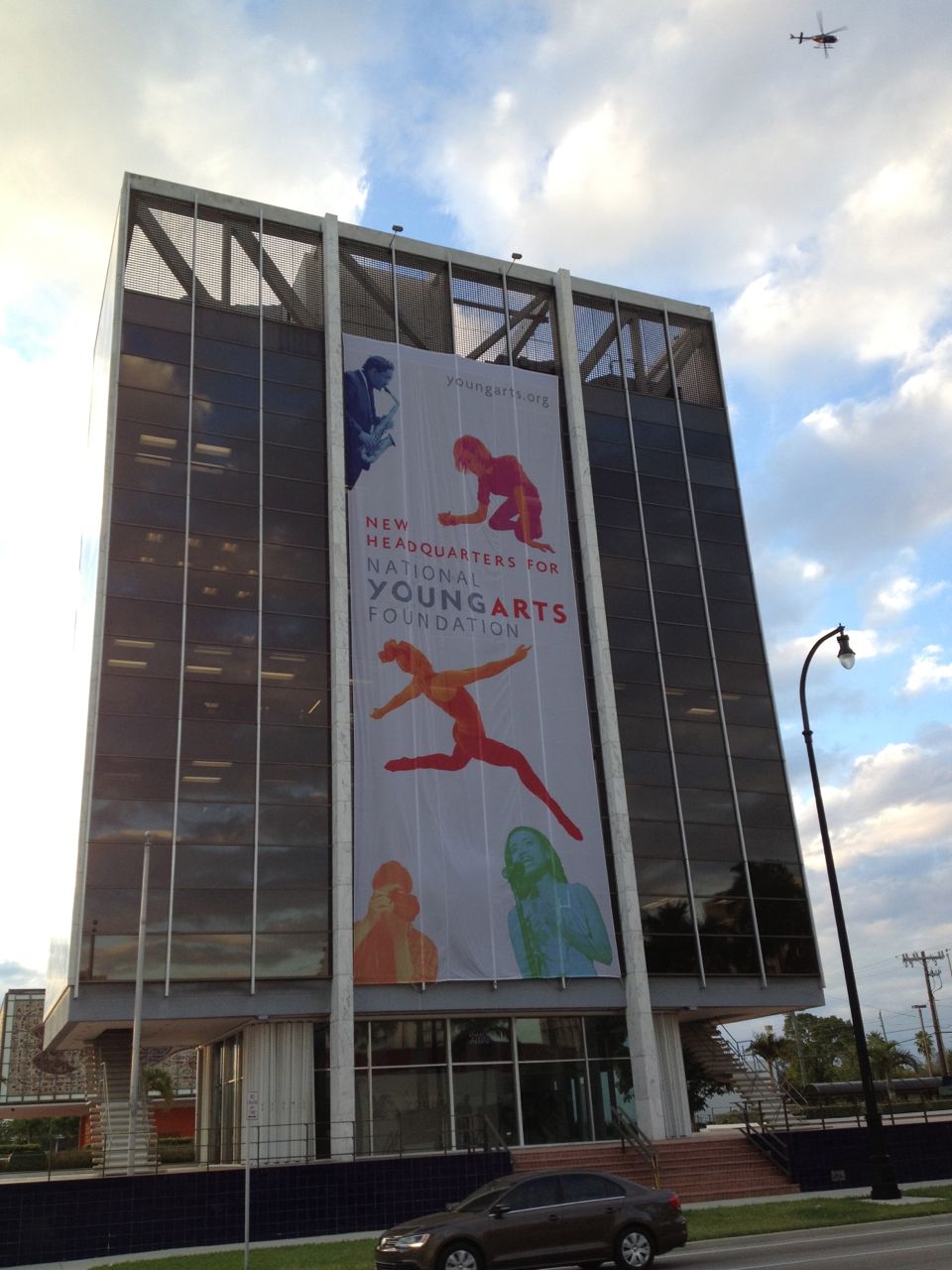 These creative and resourceful people managed the transition to Young Arts’ new digital submissions system at the same time as they moved the organization into its new campus, the iconic Bacardi Complex, just days before the panelists in nine artistic disciplines arrived from as far away as Los Angeles to begin screening submissions.

While the Young Arts staff was doing the moving and adjusting to the new computer systems, they also planned a gala Open House for the new complex, including bringing in Young Arts alums to read and perform their work on a balmy Miami evening, plus fabulous food and drink (including, yes, Bacardi rum, donated by the corporation whose buildings Young Arts now owns), films of the program projected onto the tower, cinema folks filming the performances, and a glittering crowd enjoying all of the above. Y’all have my admiration!

This new-to Young Arts campus, built for the Bacardi Company as their US headquarters in the 1960s, is located between two of Miami’s arts districts, and includes enough land for the organization to build a performing arts center, which will be designed by architect Frank Gehry, and a park landscaped to provide outdoor spaces for young artists to work. 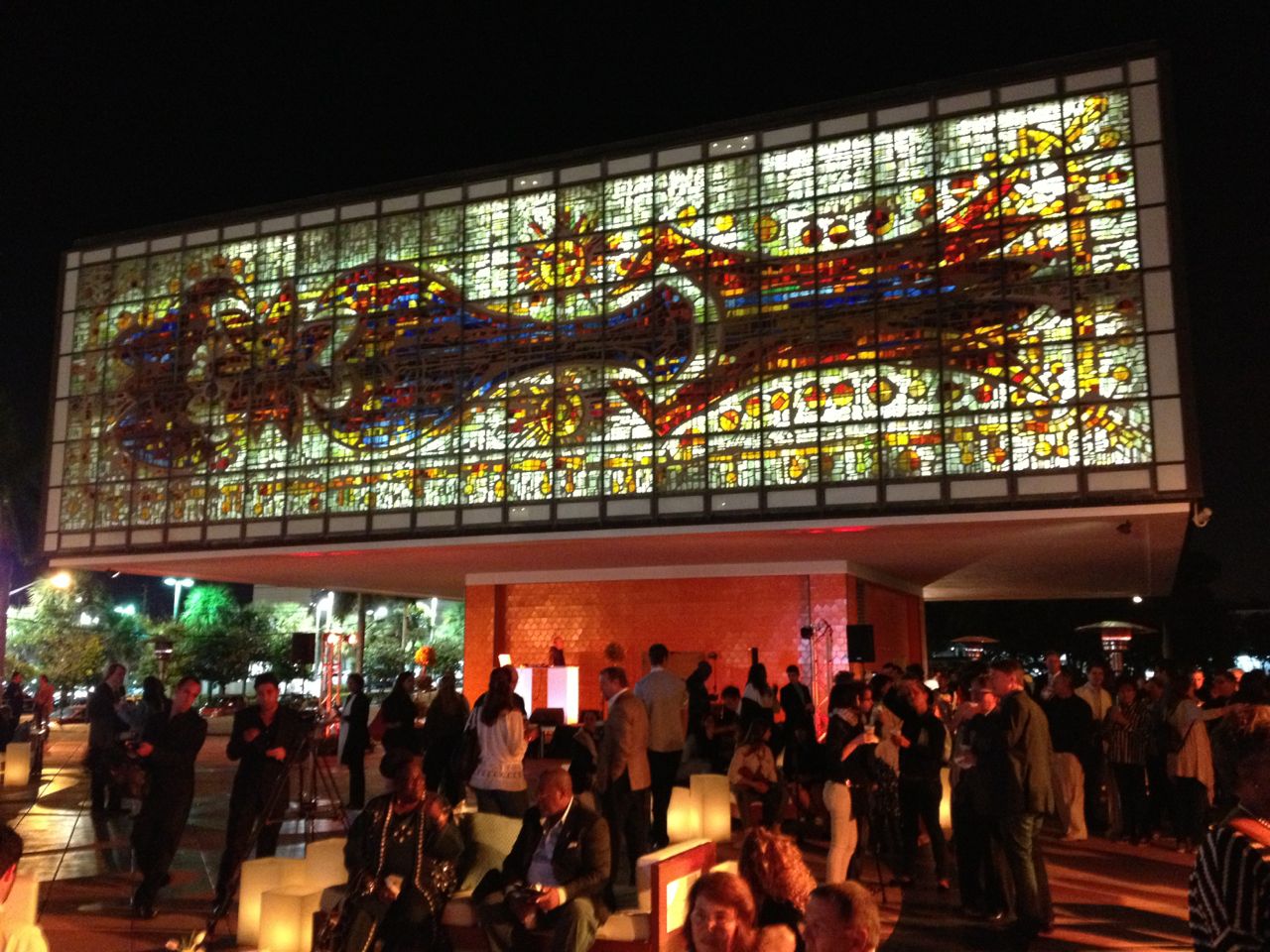 A smaller building behind the iconic tower, The Jewel Box, named for the stained glass walls that are positively luminous from the inside during the day and at night with the lights on, will be renovated into indoor studio and workshop spaces. The complex offers incredible opportunities for Young Arts to grow its year-round programming, and I’m honored to be part of that.

And of course, there are the young writers, whose work was the focus of our week. As we sat around the conference table reading from our iPads, the quiet was punctuated with “uh huhs!,” chuckles, and the occasional phrase or sentence read aloud, just for the delight of hearing the right words in the right order. We read “blind,” which means we didn’t know anything about each young writer–except their words. And sometimes those words really sing.

The Jewel Box and the famous Bacardi bat from the top floor of the Bacardi Tower, with the blue and white tiles that define the tower in the foreground.

Discovering young writers whose words sing is what carried me though a week of very long days, and then the 12 hours of cab, airport, plane, and driving over the mountains in a snowy night on my journey from sub-tropical Miami home to Colorado.

Yesterday, Veteran’s Day, I woke groggy in the pre-dawn darkness to the sight of the thinnest possible sliver of the waning moon rising next to Saturn over the night-black Arkansas Hills.

“That’s the moon we share,” I murmured out loud, thinking of my love. This time last year he was still with me, entering into that ending that is also a beginning, as Ralph Waldo Emerson writes:

That’s why I do this work. The right words not only sing, they shine, illuminating the truth at the heart of our lives.