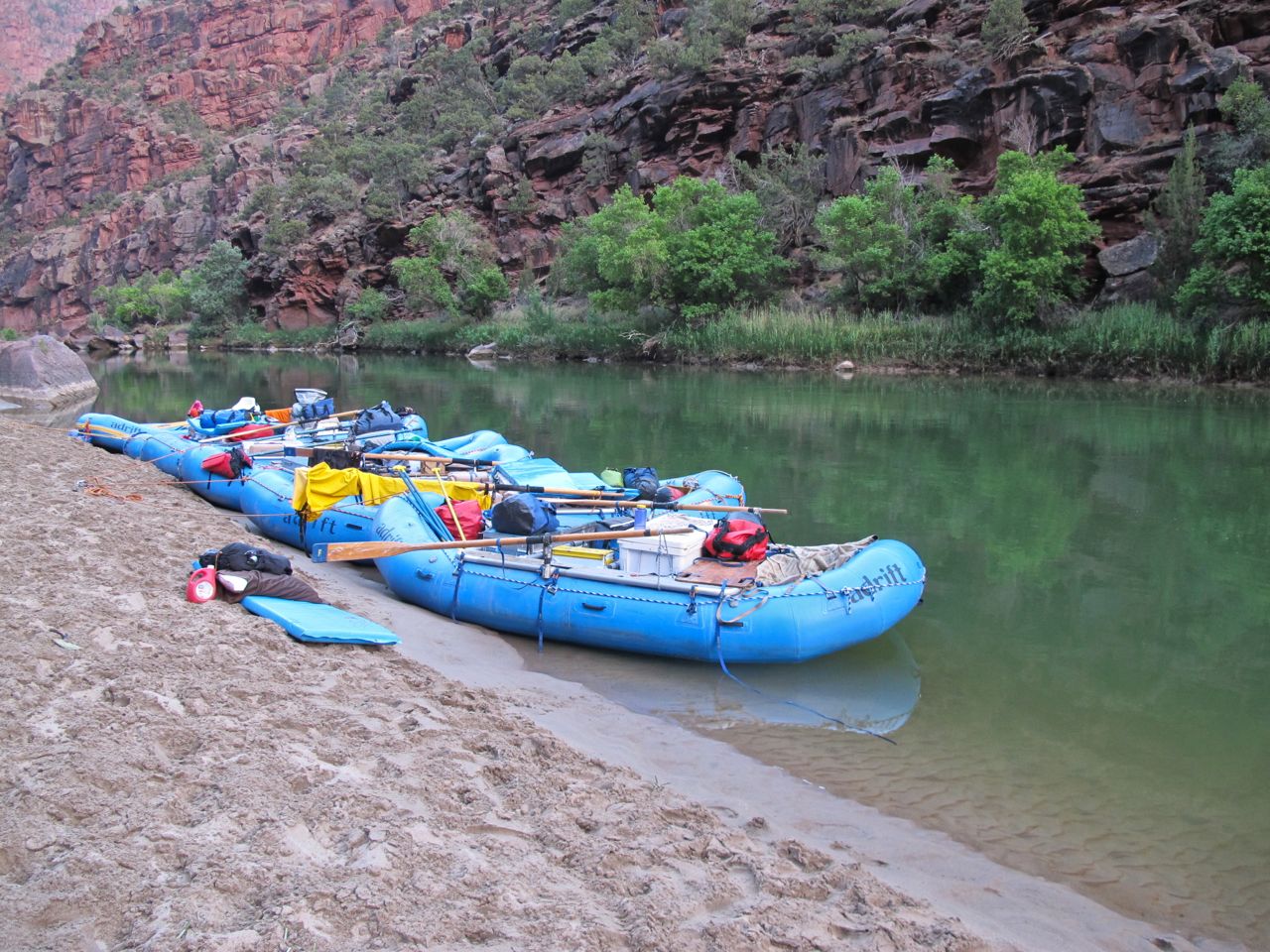 Our boats at Triplet Falls campsite, in the calm water above the cascade that is the falls.

Yesterday late afternoon when I returned from the river, after I had shaken the sand out of my gear, sorted through mail and email and phone messages, and dealt with an urgent problem, I said to myself, “I’ll haul up on the couch and write a blog post.”

My inner voice responded, “Remember the resolve you made on the river?”

Oh yeah. The one about not pushing when I’m exhausted. “I’ll write from the couch with my feet up,” I responded. “That’s restful.” (Not that I was arguing, mind you, just discussing.)

My inner voice didn’t bother pointing out that I had driven most of the way across the state that day and then unpacked and done a load of laundry, or that the float and the drive along roads I last traveled with Richard on our Big Trip had been emotional, or that a well-written blog post takes me at least three hours….

Oh no. My inner voice knows me well. It simply flipped from words to body language. In moments my right temple felt like an ice pick was piercing it, my finger joints throbbed, and my balance was shot.

Huh. I hauled up on the couch and actually rested.

And after a while, I felt better.

That little incident nicely corroborates what four days of floating the Green River reminded me about fear and trust. 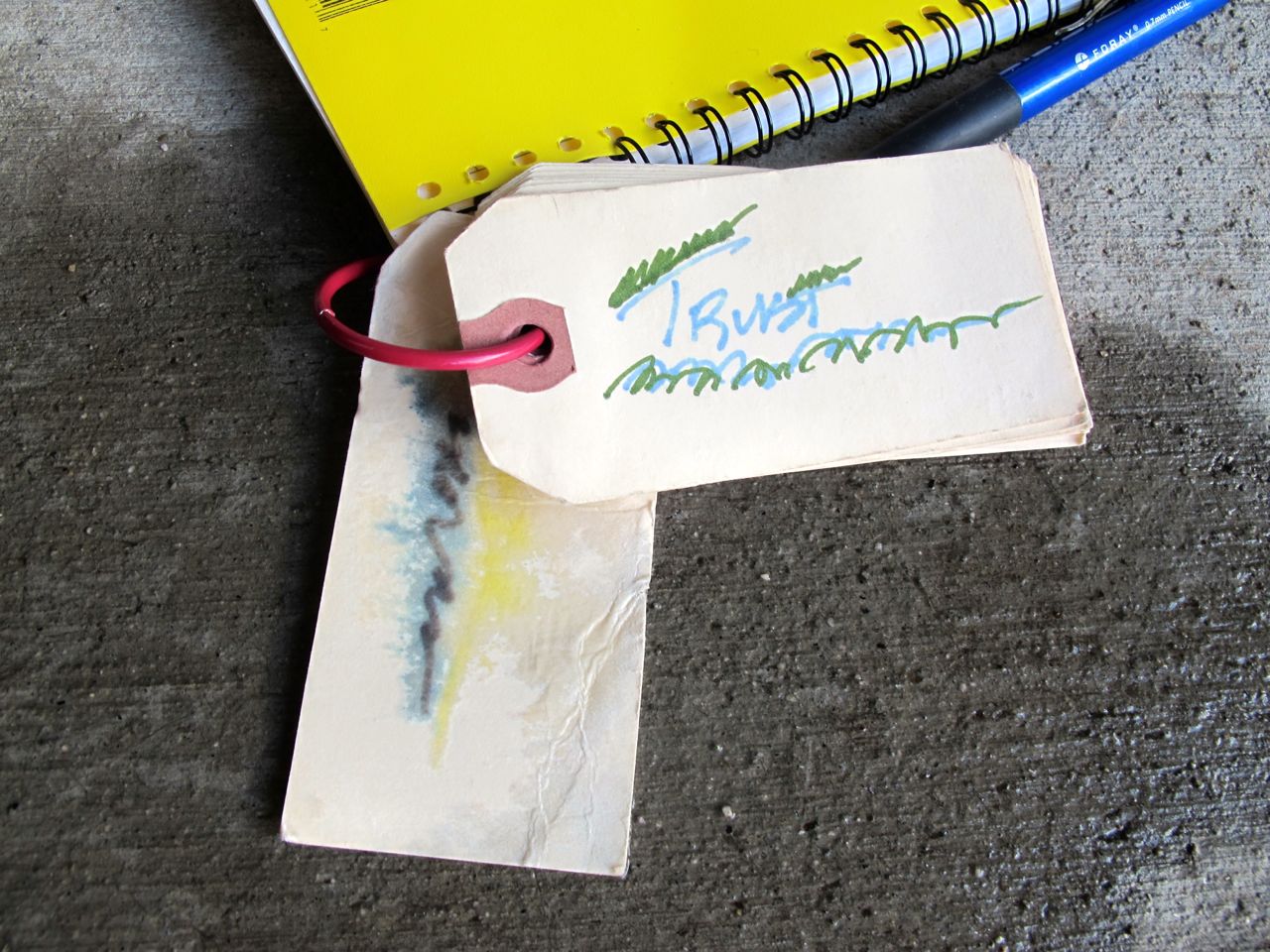 The word ring attached to my waterproof notebook

It started with the word-ring exercise I gave the group the night before the trip. I handed out one- by three-inch manila cards with a hole punched in one end of them, plus metal rings to attach them to our waterproof journals, and placed packages of colored markers in the center of the circle.

The assignment: write a word (or words) on one card in watercolor marker that represents something you want to leave behind on the float, and write another word on a different card in waterproof markers to stand for something you want to take away from the trip. We would then dip the cards with watercolor ink in the river and let the water wash away what we wanted to leave behind.

As the group chose markers and wrote and embellished their cards, I thought for about a nano-second.

Then I picked out a yellow watercolor marker for one word, and an aqua-blue waterproof one for the other. I carefully wrote “fear” in the yellow marker on one card, underlining it with crashing black rapids, and “trust” in aqua-blue on the other, outlining the letters with blue and green swirls. 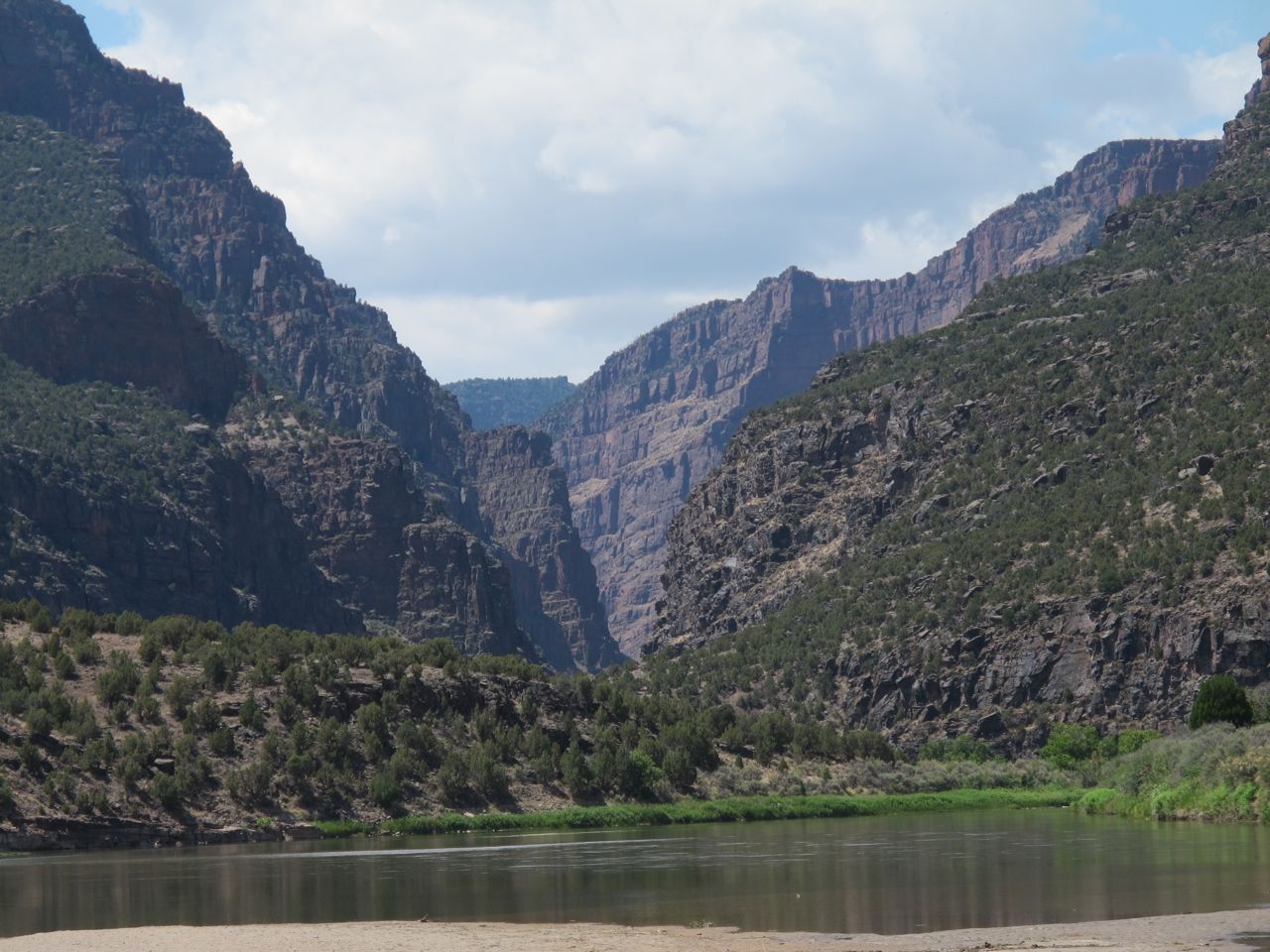 Gates of Lodore, where the Green River begins slicing its way through the Unitah Mountains in Dinosaur National Monument, a “foreboding” view, as .

That pretty much sums up the why of this float-trip for me: it was time to let go of my fear of whitewater, my grief about my friend Carol’s drowning death, and to remind myself of what I love about running rivers: riding the muscly flow of the water itself, absorbing the quiet; the chance to see majestic canyons only accessible by river, the time “away” to think and just be; the yee-haw, bow-slapping fun of it, the look at the desert from the inside; the sound of canyon wrens trilling from impossible cliff perches and the sight of bighorn sheep kids tip-toeing down to drink.

Over four days, the river and sun and water worked their magic on me, with the help of our excellent guides from Adrift Adventures and a truly sympatico group gathered by Colorado Art Ranch. 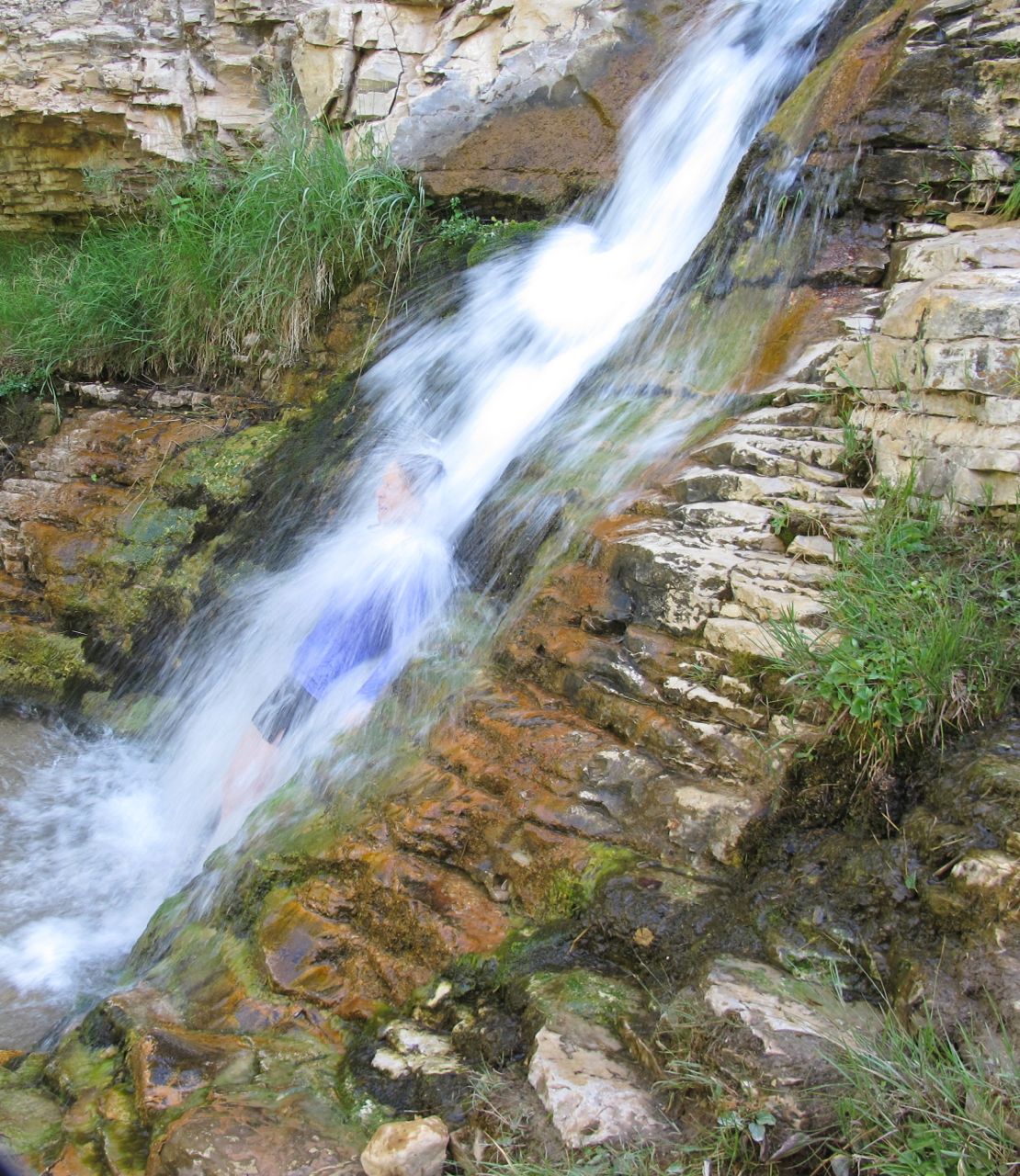 Braving Butt Dam Falls, named for the narrow channel above that can be dammed by a couple of well-placed butts, and then the flow released in a breath-taking “whoosh!”

Oh, there were some scary moments (I will never be a thrill-seeking River Girl, and that’s okay), and some lonely moments—Richard would have loved this trip, dammit! There were some wet times, not just from the river; it actually hailed and rained on us the first afternoon, and then there was that shower in Butt Dam Falls.

The ceremony in Carol’s memory at our campsite at Triplet Falls reduced both her husband Terry and me to tears. (Terry, a long-time boatman, was rowing the raft through Triplet three summers ago when it flipped, and everyone made it safely out except Carol.) But it was healing too.

On the final day of our float, I slipped from the raft and swam alongside for a few minutes, letting the river cradle me, truly going with its flow. When I hauled myself back on board, I looked back at our string of rafts and saw Terry rowing, his hands sure on the oars, a huge smile splitting his face.

Taking our fears to the river and letting the water wash them away seems to have been a powerful beginning.

The slide show below gives a sense of those four days on the Green River. It’s in no particular order, so just click through and let the river’s magic carry you.