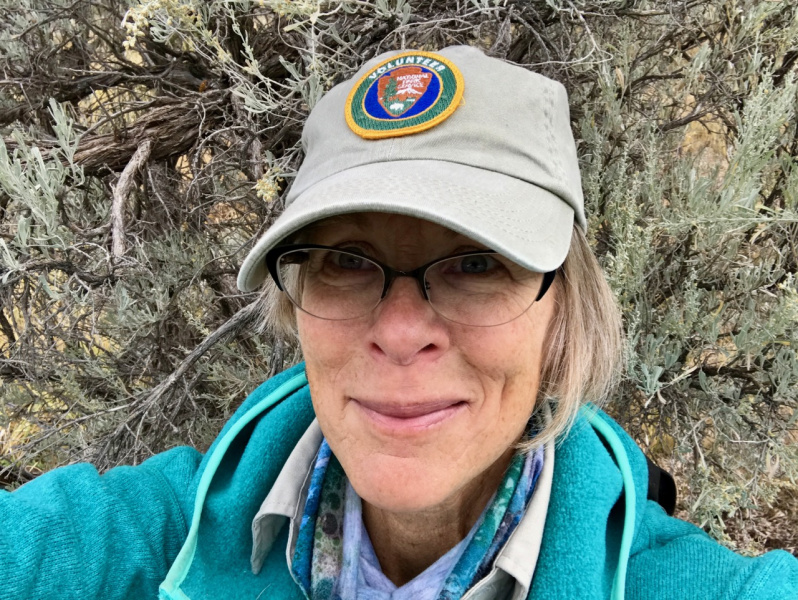 I have spent part of the last several summers in Yellowstone National Park, helping remove invasive weeds as a volunteer, work that feeds my soul even as it tones my body. Spend a day prying a few hundred invasive weeds out of hard soil with a seven-inch plant knife, and you'll know why I call my time in the nation's oldest National Park, "Spa Yellowstone." (You can read more about why I love this work in my essay, "Weeding Yellowstone," in Minding Nature Journal.) 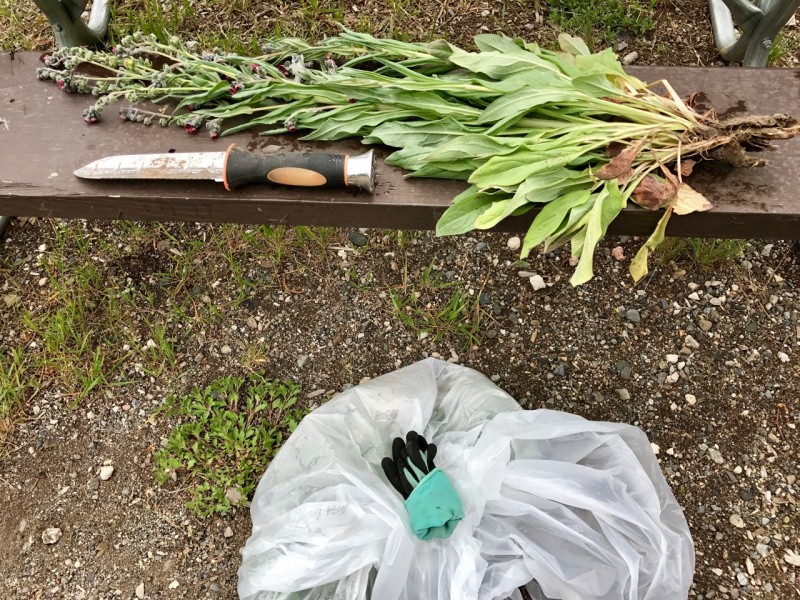 An uprooted Houndstongue (Cynoglossum officianale) plant with my plant knife for scale, plus one of the day's haul of weed-filled bags.

There is no pay for this work, though I do get an official tan polyester NPS volunteer shirt and a volunteer ball-cap that I wear with pride (and wash frequently, as both get pretty sweaty). And Heidi Anderson, the Park Botanist and my wonderful boss, arranges for a free campsite at the Mammoth Campground, the one nearest where I do most of my work. The satisfaction of doing something positive for this extraordinary planet and the joy of spending weeks at a time in Yellowstone are reward enough.

While I'm in Yellowstone, I live in Red, my trusty Toyota Tacoma pickup. The nest under the topper I have created is comfy even in spring or fall snowstorms, and suits my in-born need to be frugal and climate-conscious. 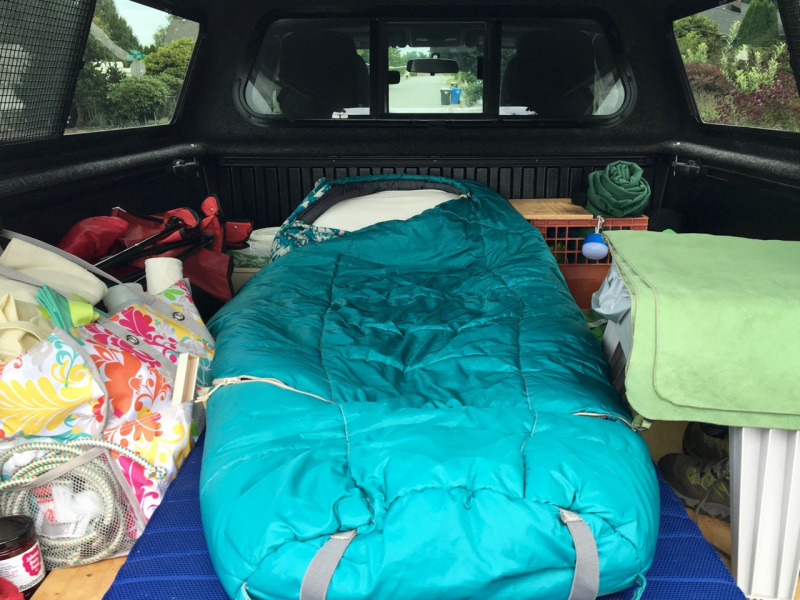 My cozy "home" inside Red's topper, complete with four-inch-thick mattress, summer-winter sleeping bag, crate for a nightstand, and camp toilet (under the green towel).

But it lacks heat for those freezing days and nights, and a space to sit and write, which I do every day–at the picnic table of my campsite in good weather, and in the lobby of the Mammoth Hotel when the weather is not fine. My truck-topper camper also doesn't offer weather-tight kitchen space either–I cook on my backpacking stove on the tailgate, which makes for chilly breakfasts on snowy days. And it's a wet kitchen in the rain. 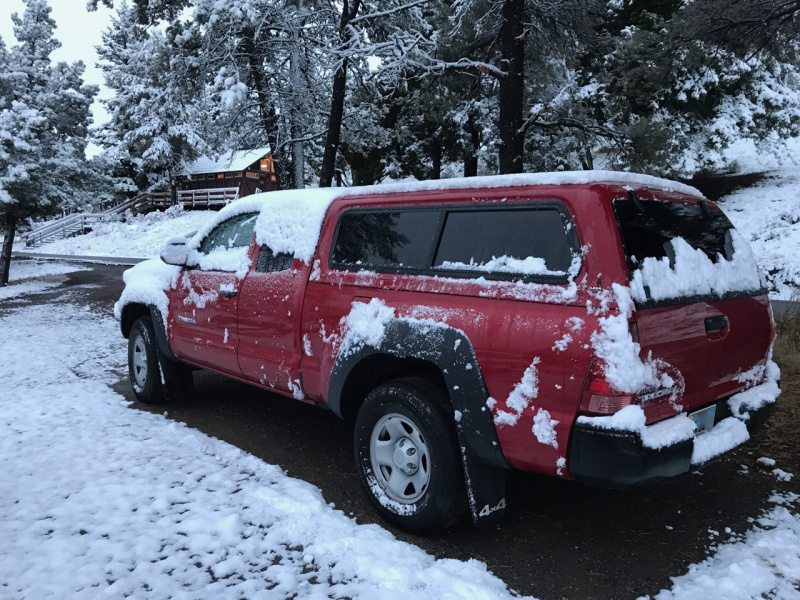 My snug home after a snowstorm the night before my birthday in September. I stayed in bed as long as I could that morning!

I love the weeding work and would like to take my plant knife to other places, but I am constrained by what Red lacks. So I've dreamed of buying a small RV, a camper-van of the sort I could live in for a month or more, roaming national parks and other public lands, and offering my services as an eradicator of invasive plants in return for time to explore and soak up these unique and wild landscapes. I grew up camping with my family in campers my dad and granddad built in stripped-down delivery vans, and I cherish those memories.

After my first season in Yellowstone, I did some research and found what looked like the perfect small RV for me, a Roadtrek Zion SRT, a 20-foot-long camper built on a Dodge Ram chassis, with a comfy queen bed in the back that converts into a dinette, a small and well-equipped kitchen, a wet bath (a bathroom that converts to a shower stall, common in small RVs), a heater, and best of all, solar panels to charge its batteries. 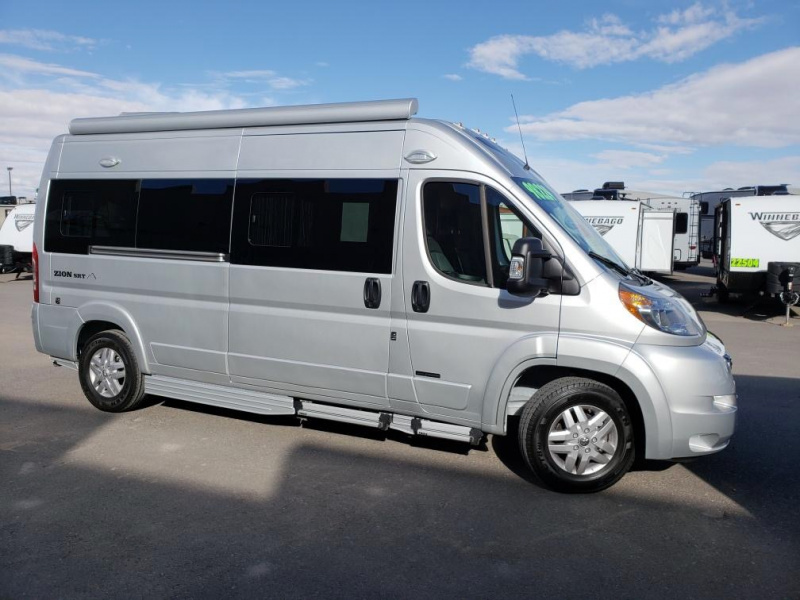 I talked to Roadtrek owners I met at Yellowstone, and they raved about the design and performance of their vehicles. The space is efficiently used, the materials environmentally friendly, the quality high, and their reliability and fuel-efficiency are legendary in the industry. One couple I talked to had been living in theirs for two years, working remotely from national parks they visited.

I began planning, saving, and dreaming of buying my own Roadtrek, which I thought of as my rolling writing studio, a mobile and comfy home. Downsizing from my gorgeous restored Mid-Century Modern house and yard in Cody would allow me to cash out and buy my dream Zion SRT, solar panels, cherrywood-stained cabinetry and all. 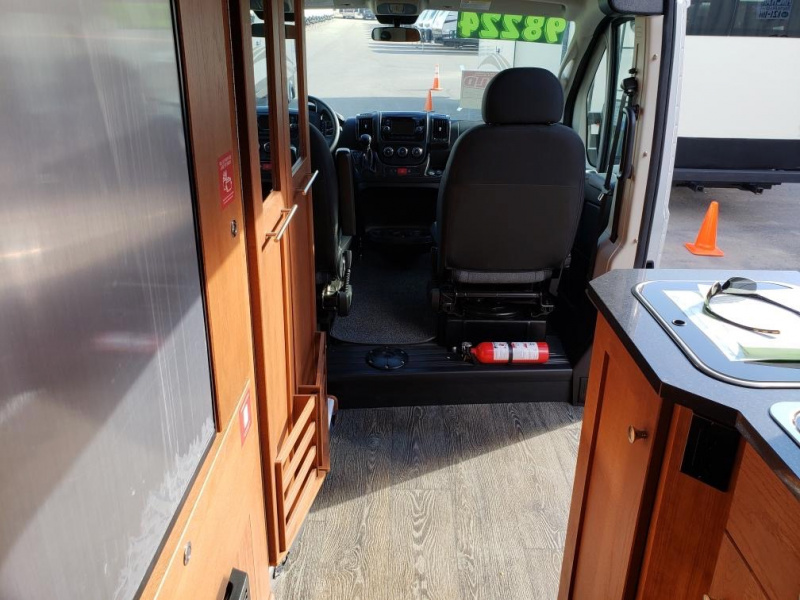 In January, after the Cody house went under contract, I treated myself with a trip to La Mesa RV in Albuquerque, where I drove a Zion very like the one I wanted, and traded camping memories with the no-pressure salesman (thank you, John Zimmerman!). He answered all of my questions and assured me that if I put down my deposit in the next month or so, I could have exactly the Roadtrek I wanted built by late spring.

I told John I would get back to him in a few weeks, once the house contract had cleared the major hurdles. And I drove home jazzed. I could see my dream coming true. I began planning my summer in Yellowstone, only with my comfy new Roadtrek, which I had already named Mercuria for her silver color.

And then… The day my real estate agent texted to say that the Cody house sale had made it through the last hurdle, and closing was just over two weeks away, I checked the newsletter of a journalist who is also a Roadtrek owner. He reported disturbing rumors about possible financial irregularities revealed in the family-owned company's books. The factory had shut down temporarily, he said. Uh oh.

I called John. He had heard the rumors too, but the talk in the industry was reassuring: Roadtrek was a valuable brand, the factory would re-start soon, and all would be well. But since the factory had ceased production, John offered to check with the other branches of the dealership to see if any had "my" dream Zion SRT in stock. It turned out there was one in Arizona, and La Mesa could truck it to Albuquerque in a few days. We talked price, and trade-in for Red, and struck a deal. I gulped, put down $5,000 for a deposit, with closing on the sale to happen a few days after my Cody house sold.

When Mercuria arrived in Albuquerque, John texted photos. I couldn't wait to see her, do a final test-drive, and drive her home to Santa Fe. My dream was coming true! 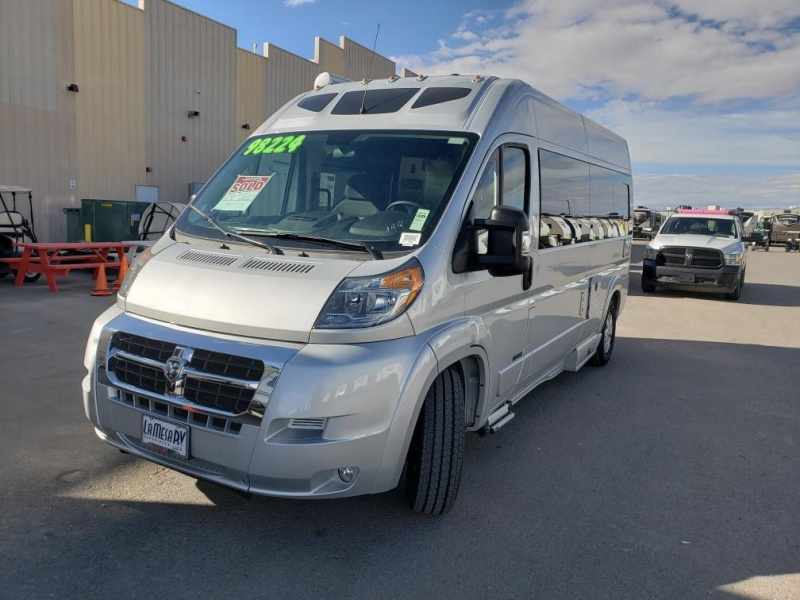 House closing in Cody went off without a hitch on Friday, February 15th. And that same day, Roadtrek went belly up. All 850 workers at the two plants in Ontario came to work and were told that they no longer had jobs, a huge loss for them and their families. $300 million had somehow gone missing from the company's assets, and it was going into receivership.

The dealership went into action: They purchased a stem-to-stern warranty program to substitute for what Roadtrek could no longer provide, they began stockpiling parts, especially the proprietary lithium batteries, from Roadtrek suppliers; they offered their decades of experience and continuing support. All of which I appreciated.

My head said go for it: Mercuria was my dream tiny rolling home and I was getting a good deal at a steep discount. Except… I began having anxiety dreams and waking in the night, heart racing. I read all the news I could find about the company: people were snapping up the remaining available inventory, industry insiders speculated that the brand would be bought out of bankruptcy, the factories re-opened, and warranties would be honored again. All of which was reassuring.

But… my gut still felt deeply uneasy about investing such a large chunk of my retirement cash in the RV I had dreamed of without a company to back it up. This morning when I woke up at four am worrying again, I decided to let that dream go. Mercuria isn't right for me now. But I know she will be perfect for someone else.

What is Plan B?

I've spent the day looking at other RVs on the internet, and found that there just isn't anything I love enough to justify paying out what to me is a stupendous sum of money. Furthermore, I realized that at heart, I am the homemade, back-of-a-truck, small-footprint sort of camper. I need something more all-weather than Red's topper, but not something as fancy as Mercuria.

So I've re-thought my plan and gone back to a dream I tried unsuccessfully to convince Richard to go for years ago: Buy a small SUV (a hybrid now that they're becoming available) and a tiny teardrop trailer, just big enough for a bed and sitting area, with a back hatch that opens into a covered kitchen. 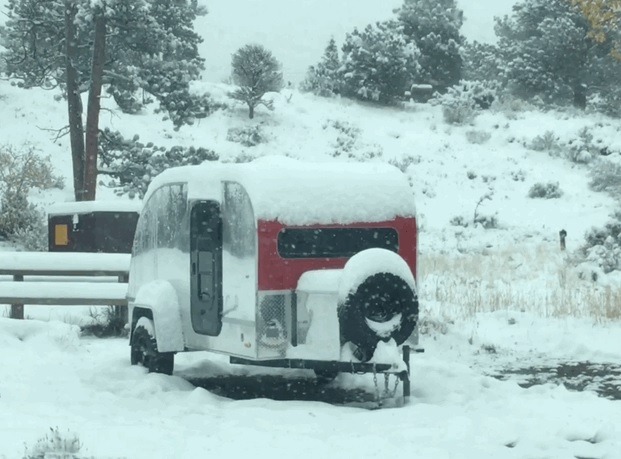 I think I know just the trailer, a Basedrop from Colorado Teardrops, kitted out with extras like a solar panel for power, a pumped water supply, and star-gazing skylight. For the tow vehicle, I'm inclined toward a Toyota Rav4 hybrid, a small and fuel-efficient SUV with the comforts I've gotten used to, like heated seats and a good stereo system for long road-trips. 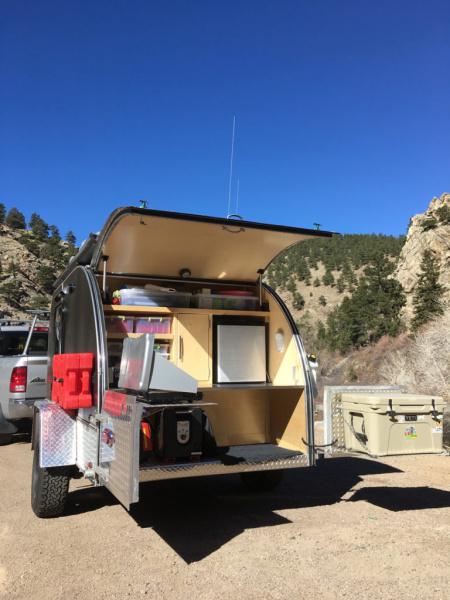 The lesson: Adapt. Don't cling to dreams that no longer suit us. Times change–and if we don't change with the times, we risk making decisions and going in directions we will likely at least regret later, if not actually suffer for.

So I've let go of Mercuria, and saved a bunch of money in the doing. I can see myself tooling down the road in my Rav4 hybrid, blue I think, towing a tiny solar-powered trailer where I can cook myself dinner, write and read, and sleep soundly after a long day of digging weeds, snug as can be. That sounds like me…