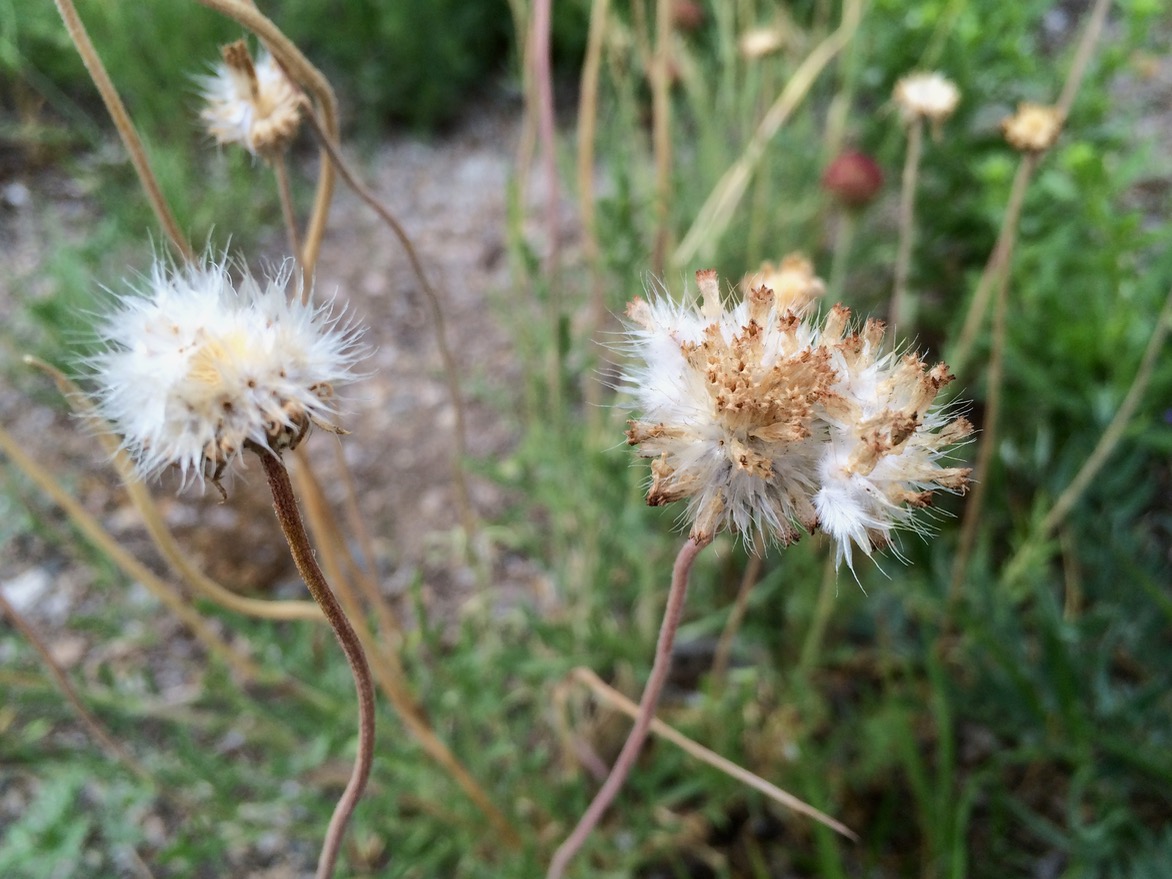 I was sitting out on my front deck late this afternoon, talking to my dad on the phone when I heard a characteristic chiming call.

I looked across the creek in the direction of the sound, and there was a slender little bird, shiny black above and canary yellow below, clambering on the slender stalk of a cutleaf blanketflower across the creek and energetically picking out the seeds, just a few feet from the pavement of my town’s most heavily-traveled walking/biking trail. (The photo above is the seedheads; I wasn’t quick enough to catch the bird.) 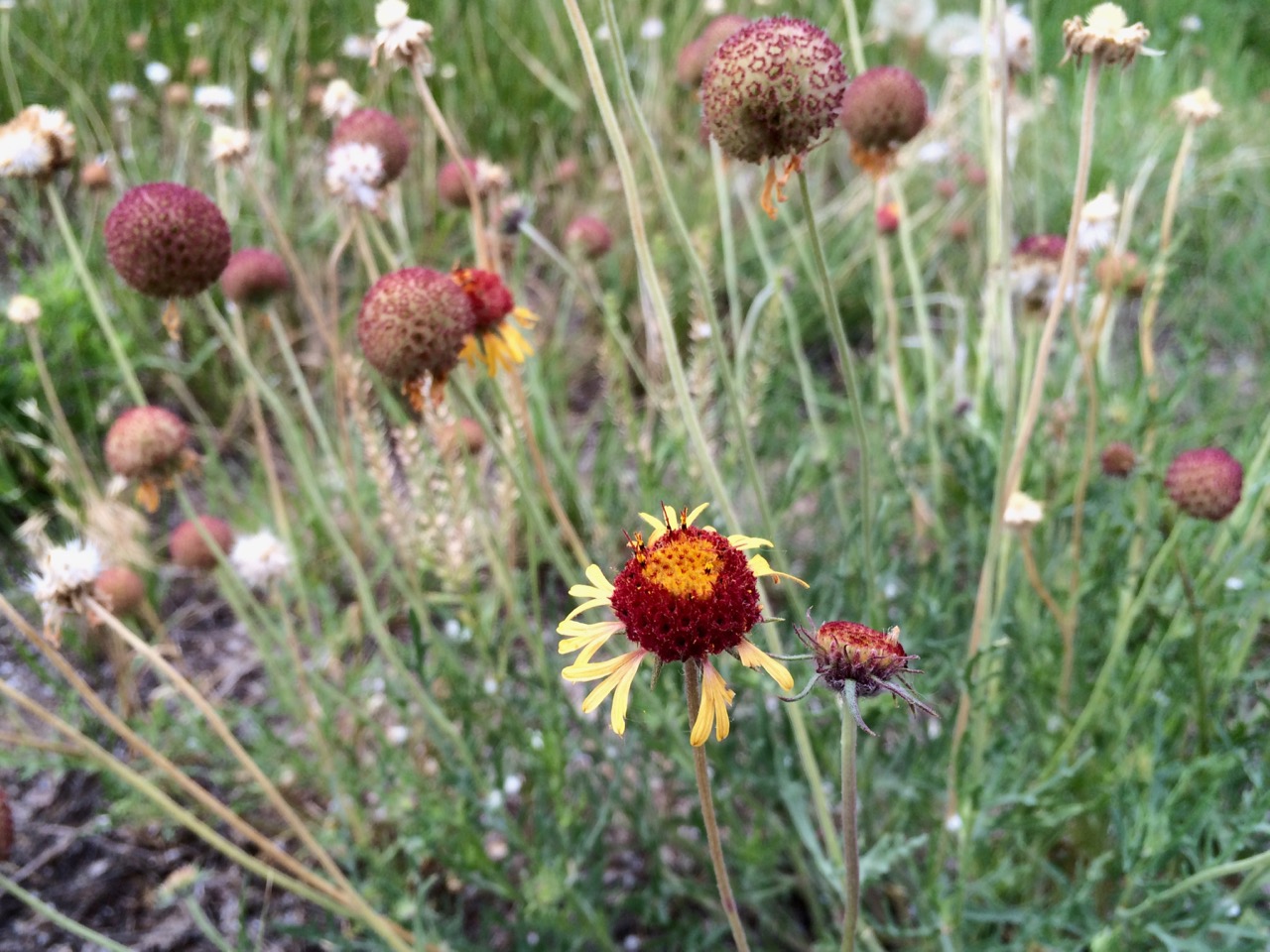 Cutleaf blanketflower (Gaillardia pinnatifida) with the finely dissected foliage that gives it its common name.

“It’s a Lesser Goldfinch, Dad,” I said, and described the bird to my father, half a continent away in Western Washington.

“It’s probably a newly fledged male,” responded Dad, who may be 86 years old and legally blind, but retains a clear image in his mind of each of the hundreds of species of birds he’s seen over six decades of studying all things wild and feathered. “Have you been hearing nesting activity?”

“I think they nested in the big elm trees along John’s fence-line,” I said, mentioning the neighbor’s place, two houses away.

“That’s likely,” said Dad. “Is the Gray Catbird still around?”

“I didn’t hear it singing this morning,” I said. “But it hung around for the better part of a week, and that’s the first time I’ve seen one right in town.”

“That shrubby thicket along the creek is good habitat,” said Dad. “The bird was probably a young male; it takes catbirds about a year to learn their breeding songs.” 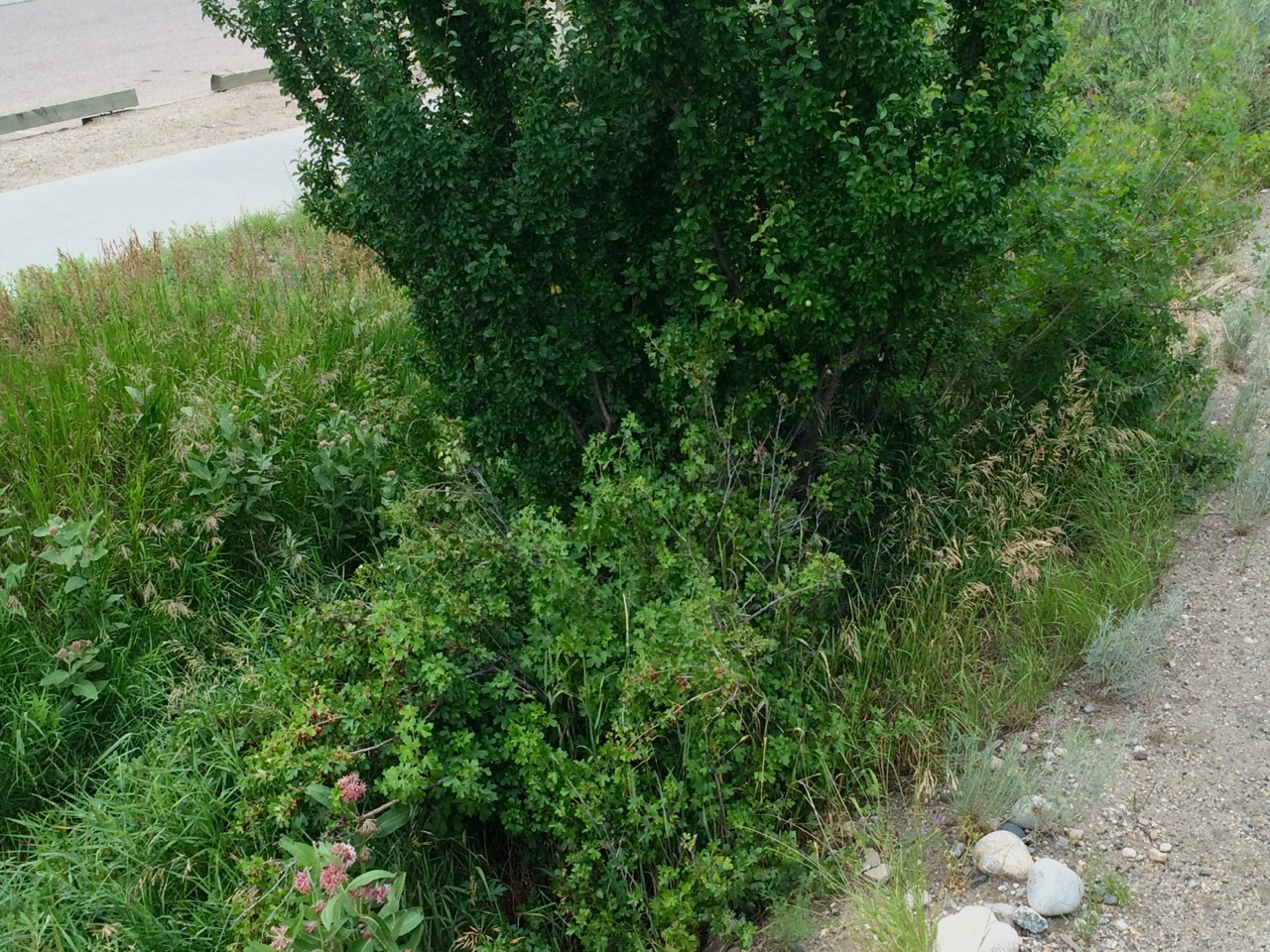 Part of the narrow but dense riprian thicket along tiny Ditch Creek as seen from my deck. (The creek, hidden by the plants, runs diagonally across the middle of the photo from lower left to upper right; Monarch Spur Trail, the town walking and bike commuter path, parallels the creek on the upper left.)

Dad talked on about Gray Catbirds, dark-gray birds more slender than robins, with a longish tail and a black cap. They’re mimics like their mockingbird cousins (yes, Harper Lee’s first novel is named for a real bird). In addition to borrowing phrases from other birds’ songs and human and mechanical sounds like car alarms, catbird’s drawn-out songs incorporate cat-like mewing sounds, hence their common name.

I listened and watched the view from my deck, including the thread of dredged, straightened and once-polluted urban creek I’ve spent the last 18 years restoring to health, and the bits of mountain prairie I’m nurturing between the creek and the popular pedstrian and bike trail.

Two monarch butterflies patrolled the airspace above the showy milkweed plants, probably newly emerged males looking for females to mate with. In the distance, I heard the thumping bass of a car cruising our town’s main street, likely on a similar quest to the butterflies’ patrol. 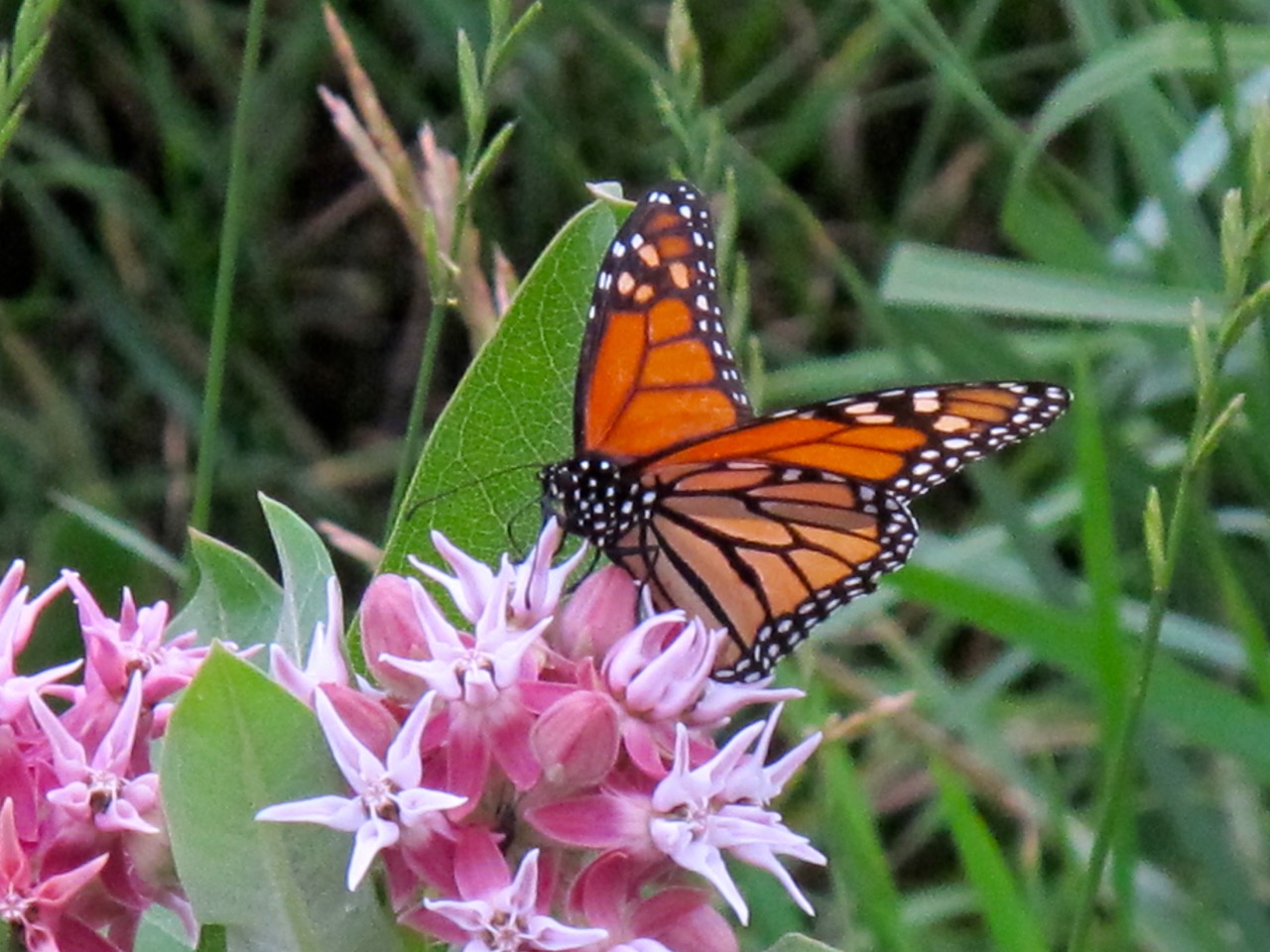 A family biked down the trail, Dad in the lead, Mom in the rear pulling a trailer with the youngest kid riding, and in between two boys on junior-sized mountain bikes and a little girl on a strider–a bike with no petals propelled by her chubby legs pushing on the ground.

A Tree Swallow swooped just over my head, trolling the air for small insects. (It’s one of a pair nesting in a gap in the eaves of my neighbor’s house, just above her front porch.) 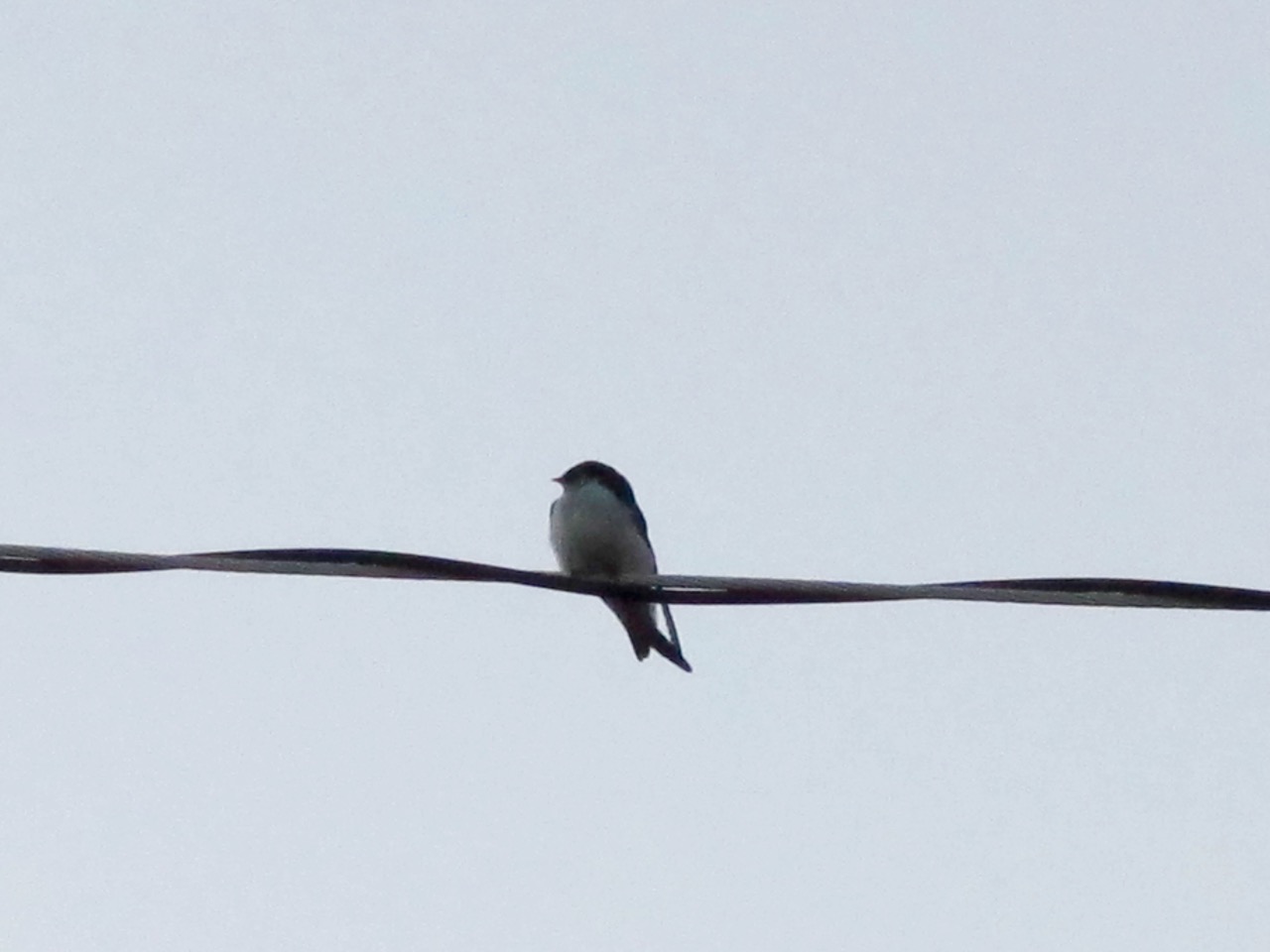 Tree Swallow perched on the electric wire supplying the streetlight across the creek.

Three young women strolled by, each pushing a baby stroller, and chattering energetically in Spanglish. One of the twin fawns born a couple of weeks ago in the vacant lot across the way stood up from the nest in the tall grass where the two hide while their mother is off feeding and bleated suddenly, perhaps startled by the trio of women, or more likely–since these are town deer and used to people, hungry and calling Mom. 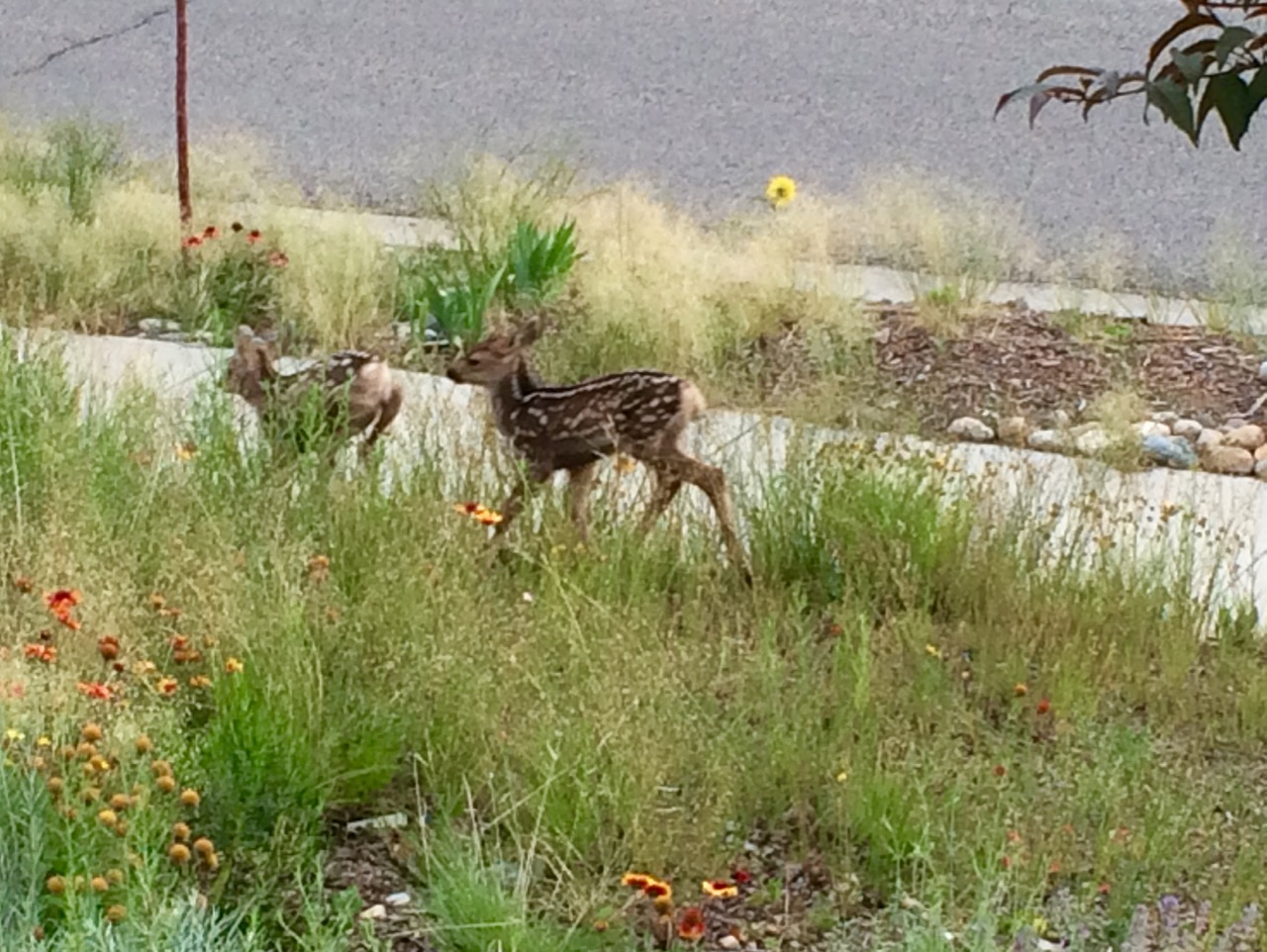 The twins, trotting by my front-yard meadow before dawn last week. (They’ve doubled in size since this photo.)

A bumblebee buzzed by so close that it nearly banged into my head.

Later, after Dad and I finished talking, I spotted the bumblebee energetically drinking nectar at a Lambert’s milkvetch (Oxytropis lambertii) growing next to the cut-leaf blanketflower across the creek.

I walked over, crouched down, and shot a photo with my iPhone. The bumblebee’s not quite in focus–the camera phone isn’t the best at macro photos–but you can see what it’s doing. 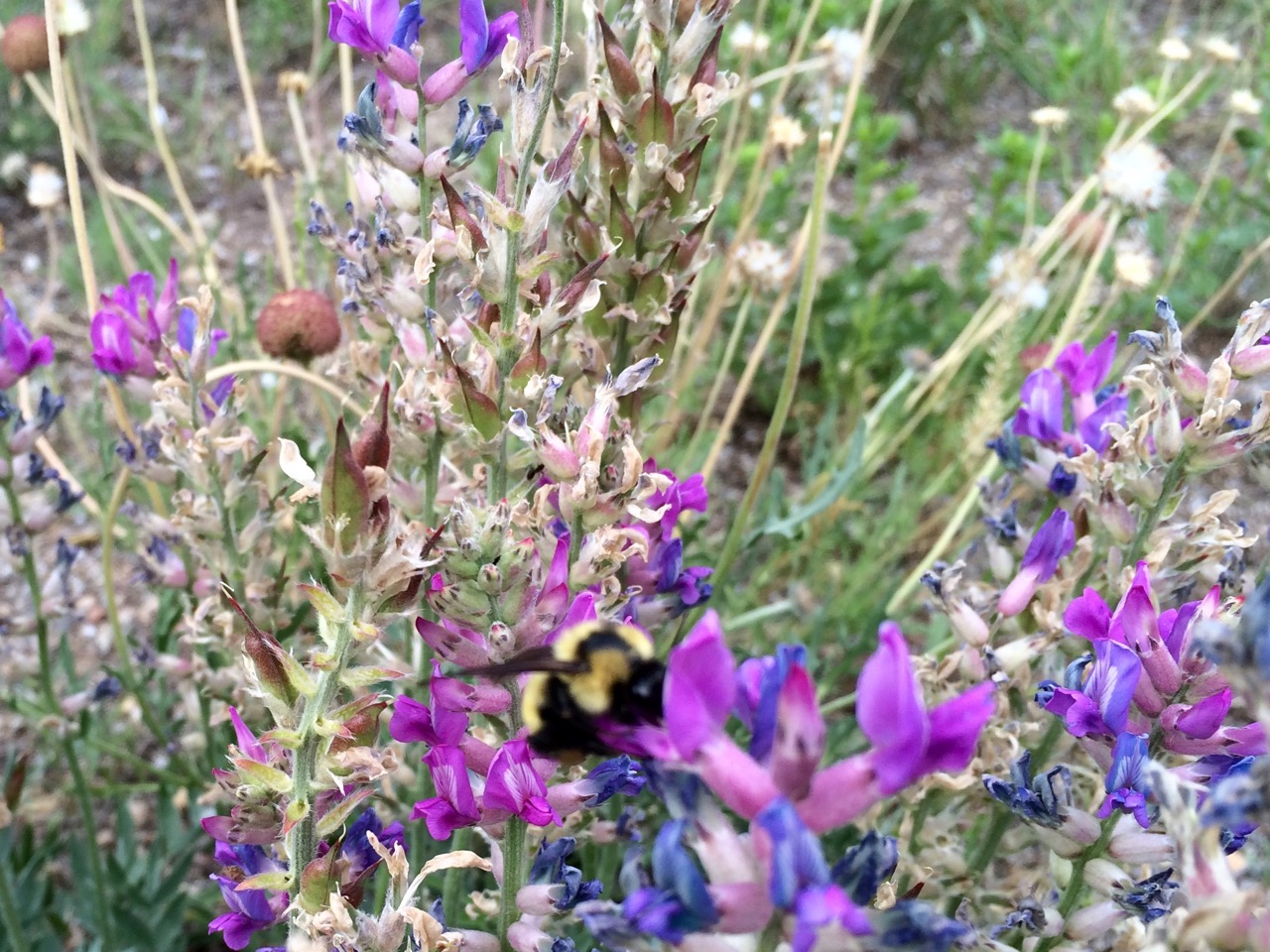 While I was trying to focus another shot, two teenagers rolled by on skateboards, going slow and holding hands.

“What are you doing?” asked the blue-haired girl.

I showed them the bumblebee and talked about the close relationship between wildflowers and native bees. “See how the flowers are shaped just right so the bee’s tongue forces the flower open when the bee presses on it? That’s how it gets a drink of the nectar inside, and in the doing, pollinates the flower so it can make seeds.”

“Awesome!” said the boy, sounding like he really meant it. “Did you plant these flowers?”

“I did,” I said. “I’ve been working on removing the invasive weeds and restoring the native mountain prairie to provide habitat for birds and insects, and to shade the creek and clean its water.”

“Is it part of some project?” he asked.

“No,” I said. “It’s just what I do to leave my patch of this earth in better shape than I found it.”

They rolled on, still holding hands.

I walked back across the creek and climbed the steps to my deck, thinking how lucky I am to live in a place I love as deeply as I loved Richard, the man who introduced me to this town and its landscape. 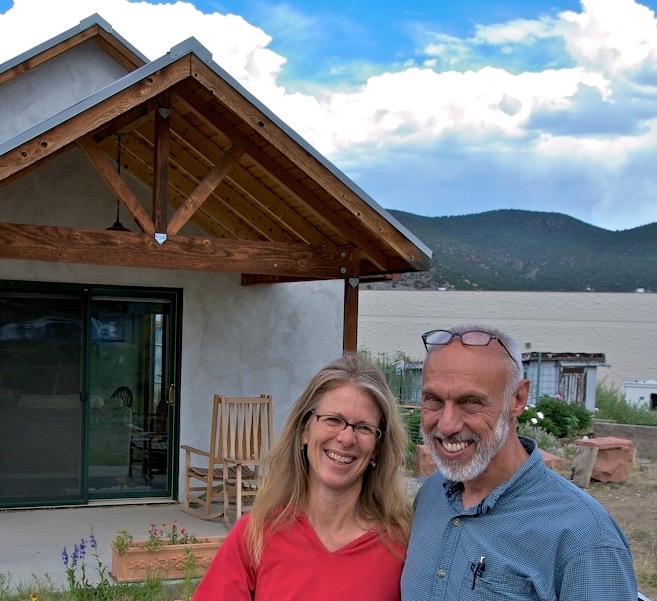 The love of my life is gone now–he died of brain cancer four years ago come November. But I continue the work we did together, healing the creek and this plot of formerly junky industrial property.

Work that brings me the joy of sharing birds with my dad, watching butterflies and native bees, and teaching passers-by about the relationships that weave the community of the land–our home here on earth. Work that helps heal me, too.