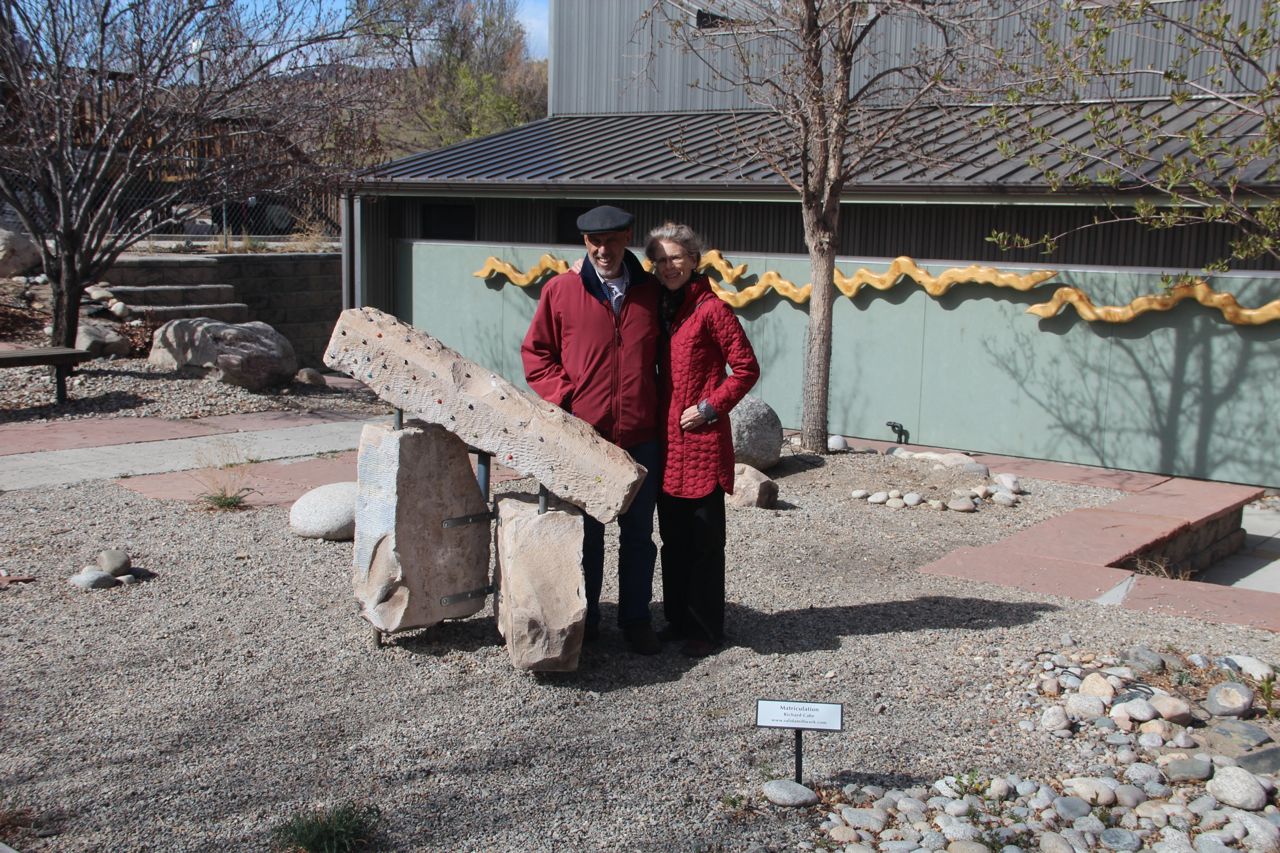 Richard and me with Matriculation, April 2011 (Photo by Halvard Tveit)

A year ago, the love of my life, Richard Cabe died, encircled by love. That evening, I watched the new moon set. New moon, new beginning, I thought to myself, albeit one I hadn’t asked for and didn’t want.

As the anniversary of Richard’s death drew near, I debated what–if anything–to do to mark it. I had just about decided to stay home and sulk when my neighbor Kerry suggested wrapping ribbons around Matriculation, his public sculpture at Salida’s Strawn/Grether Sculpture Garden.

I said no. (Adding “thanks,” I hope.) But the idea grew on me: using Matriculation, his favorite public piece, as a focal point for remembering him. We could also light luminarias, candles sheltered in paper bags on a scoop of sand, a traditional winter ritual.

I told Kerry that I had changed my mind. I’d invite close friends and nearby family to join us to wrap ribbons around the sculpture, light luminarias and say something about Richard. She agreed.

Earlier this month, I found some beautiful organza ribbon in his favorite burgundy color. Last night, I picked out two Mary Oliver poems to read. This afternoon I folded two dozen white lunch-size paper bags while talking to his palliative care psychologist from the Denver VA Medical Center, Dr. Elizabeth Holman, who called–bless you, Elizabeth!–to let me know she was thinking of me.

I took the bags out to his studio, put a couple of cups of sand in each, added candles, and carried the luminarias to my car. 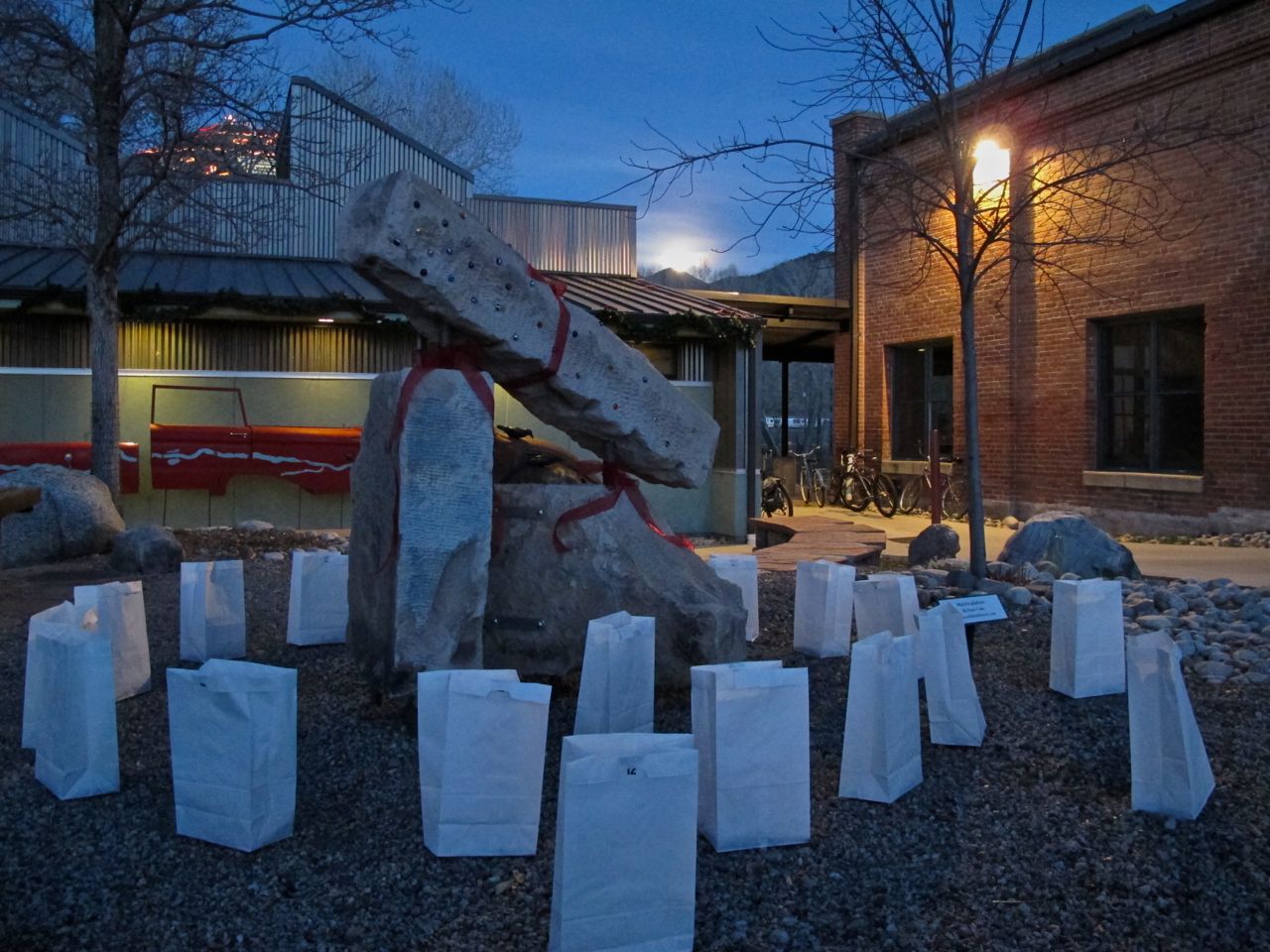 The moon rises over the Arkansas Hills, be-ribboned Matriculation and luminarias. (Salida’s Christmas Mountain is visible over the SteamPlant Event Center roof on the left.)

The sun set as I finished wrapping Matriculation in the gauzy ribbon. I was placing the luminaria bags in a circle around the sculpture and talking to a woman passing by when I looked up at the skyline of the Arkansas Hills and saw a shimmering halo: moonlight.

“Look!” I said, pointing. I ran to the car to get my camera. We watched the moon slip over the horizon, wreathed in a silvery halo of cirrus clouds.

I drove the car home and trotted back to the Sculpture Garden in the gathering darkness. People arrived by ones and twos. We lit the luminarias, chuckling that the air had been perfectly still before we struck the first match, and then a cold breeze sprang up, blowing out the matches and rustling the bags. We got the candles lit anyway, and formed a circle, holding hands, around the luminarias.

I read the two Mary Oliver poems (“Wild Geese” and “In Blackwater Woods“). Tears clogged my throat at the end, and I dropped the paper I was reading from as I read the last line:

To live in this world

you must be able
to do three things:
to love what is mortal;
to hold it

against your bones knowing
your own life depends on it;
and, when the time comes to let it go,
to let it go.

People spoke about Richard, appreciating his smile, his extraordinary intellect and wide-ranging conversation, his generosity and patience, his art, his company. Then we hugged, wished each other goodnight, and headed home in the cold darkness. 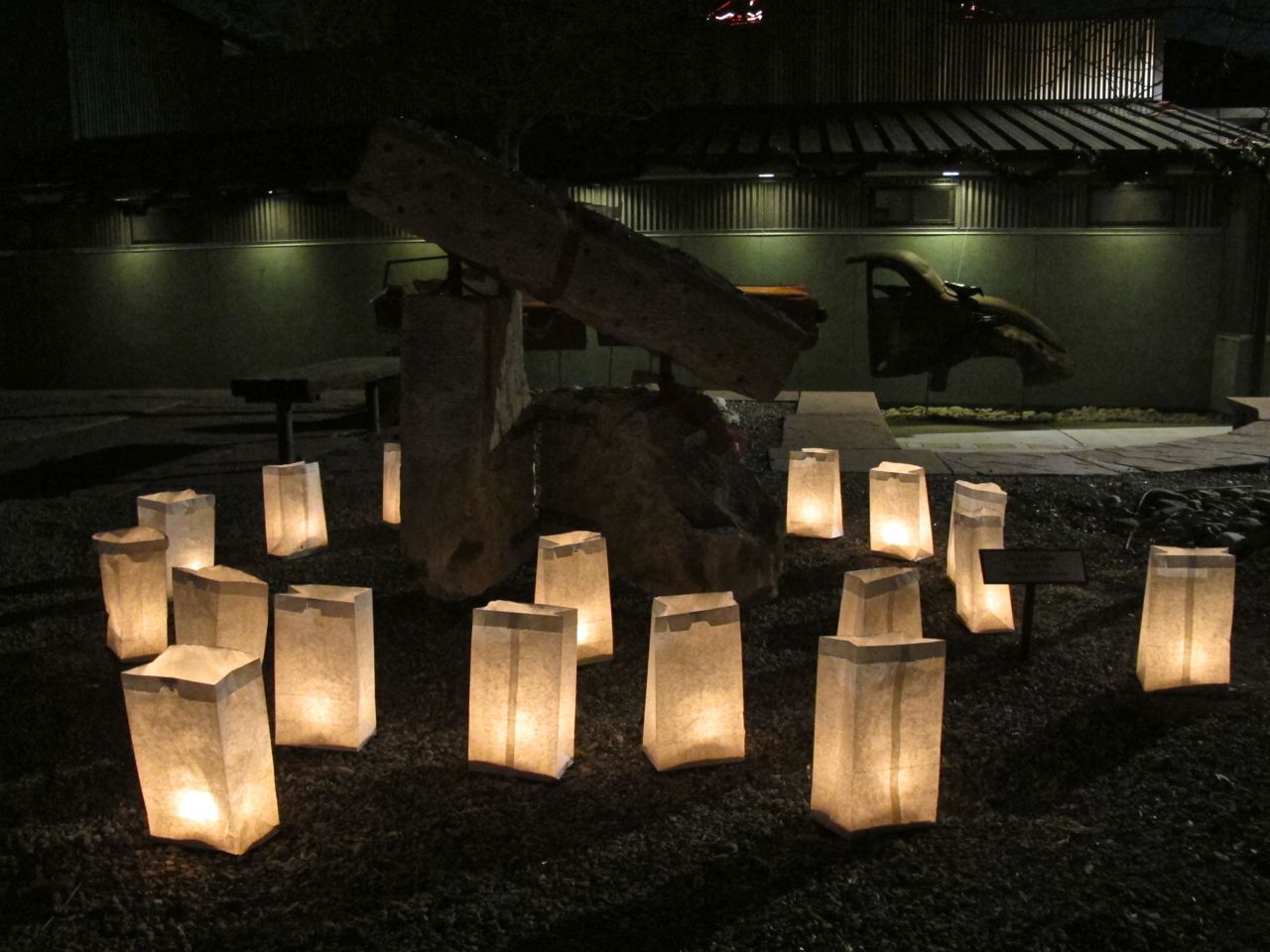 Luminarias burn in a circle around Matriculation.

I turned to look back as I crossed the street. The soft light of the luminarias encircled Matriculation, the flames of the tiny candles burning steadily, each cushioned on its bed of sand, sheltered by the fragile paper bag. The circle glowed, sending our love out to Richard’s spirit, wherever and whatever that means.

I swallowed hard, and felt a smile come through the tears. I’ve lived a whole year without him, come full cycle from the new moon the night he died to this almost-full moon twelve months later. It’s not been easy, but it’s been a good year in many ways, largely because of that very love, which buoys me every day.

I turned, hurrying a little to catch up with Kerry and Dave, and walked up the path with them, headed home.