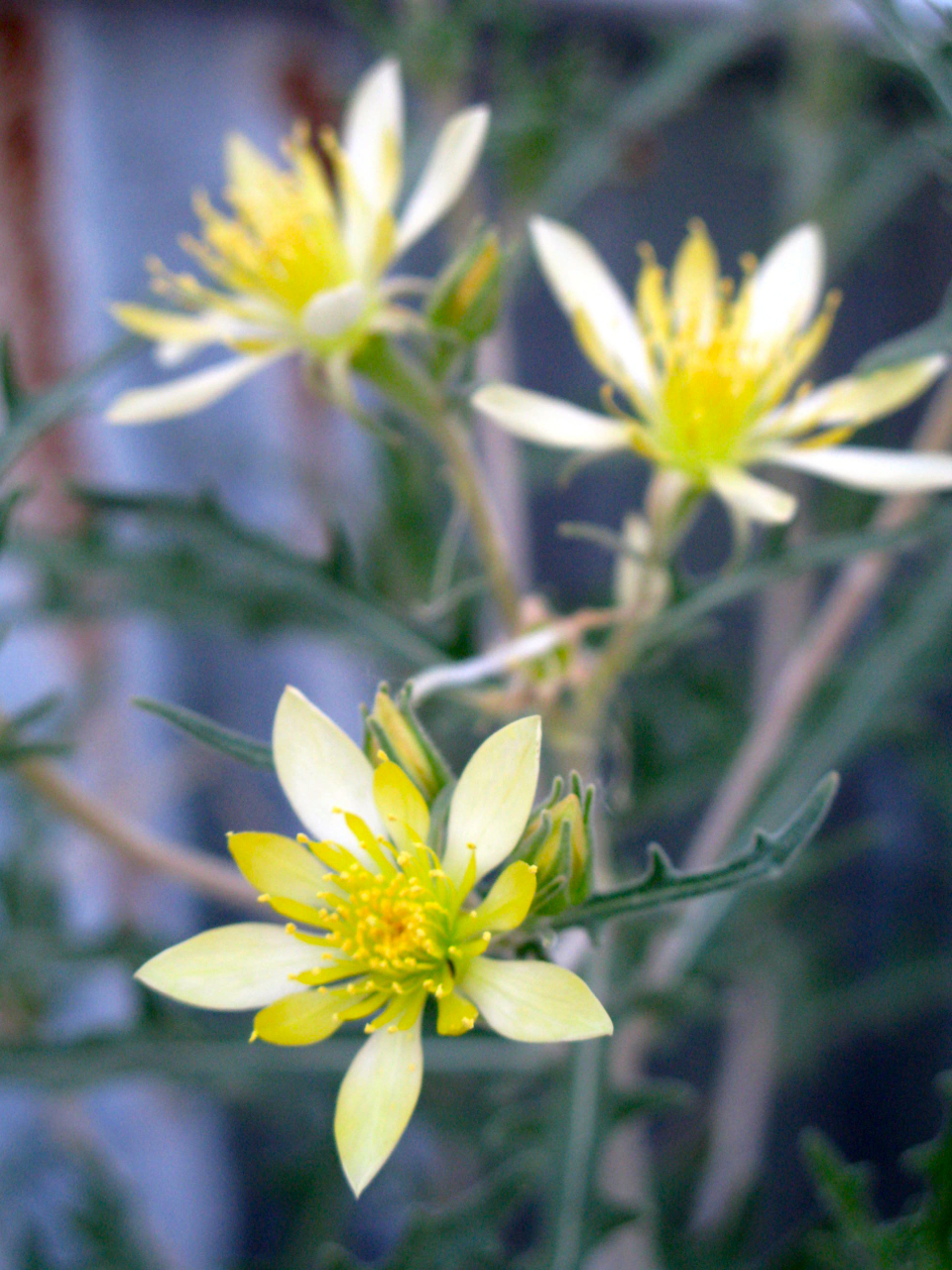 Last Thursday evening, I sat on Red’s tailgate in the San Luis Valley south of Salida, watching blazingstars open as I waited for my friends Maggie & Tony to join me in a field trip to the Orient Mine to see the evening bat flight.

Each night from June through September, a quarter-million Mexican Free-tailed Bats (Tadarida brasiliensis in the language of science) pour out of the collapsed roof of what once was Colorado’s largest iron mine. 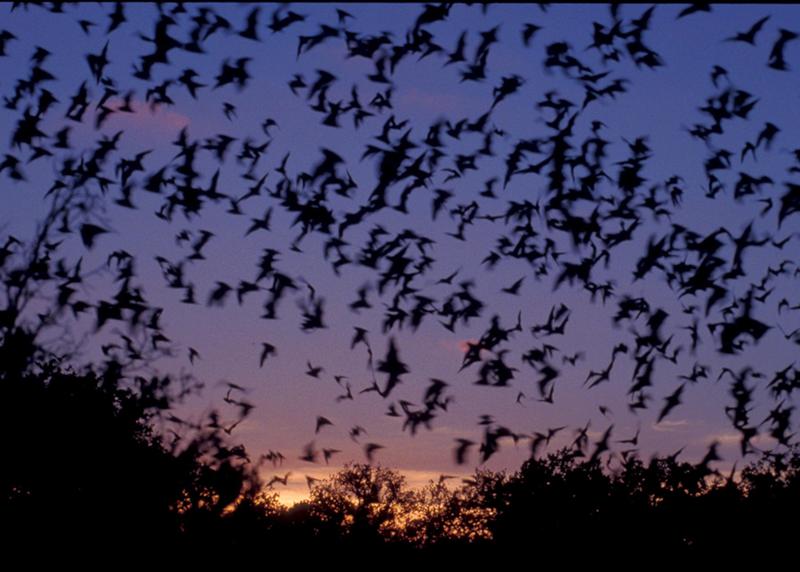 Mexican Free-tailed Bats from a colony in Texas. (Copyright-free photo, not mine)

Mexican Free-tailed Bats aren’t big as bats go–their wingspan stretches a foot or so and they only weigh about half an ounce. Their colonies are huge though: caves in the southern Southwest, including Bracken Cave in Texas and Carlsbad Caverns National Park in New Mexico, contain millions of Mexican Free-tails.

The Orient Mine bat colony is nowhere near as numerous, but at 9,000 feet in the northern San Luis Valley, it has the distinction of being the farthest north and highest-elevation roost of Mexican Free-tailed Bats. And it’s only about an hour and a half from Salida, plus a short hike.

When Tony & Maggie pulled up, we loaded into Red and set off headed east toward then Sangre de Cristo Range, then turned north on a narrower but still good gravel road, after which we turned east on a rocky two-track and bumped our way uphill. Our track turned south again, crossed a steep-sided drainage, and began following a straight, gently sloping grade that we soon realized was an old narrow-gauge railroad bed. 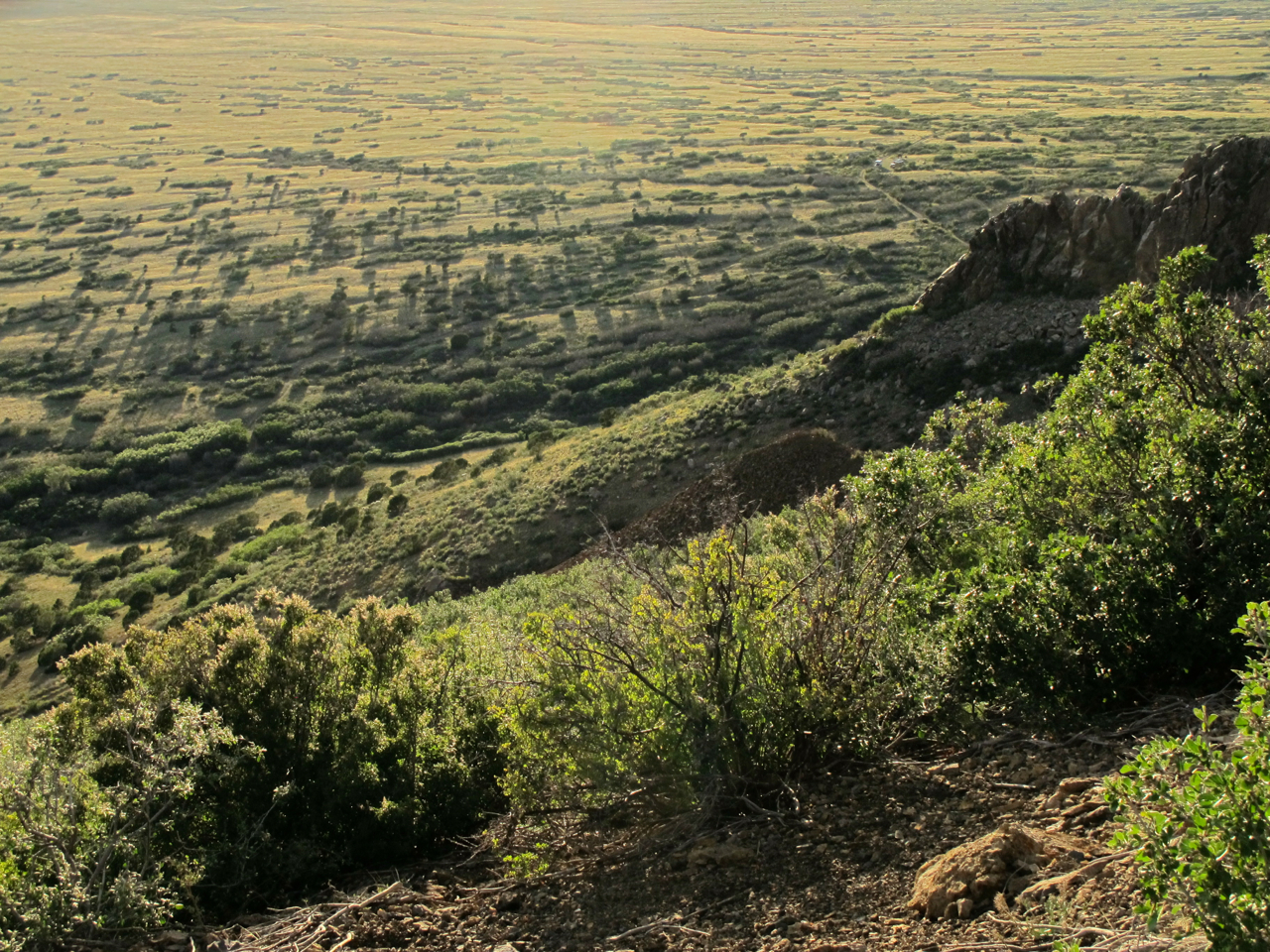 Part of the route is visible at the upper right above the rock ridge. (Click on the photo to enlarge it.)

I parked Red where a gate closed the road to vehicles. We grabbed our packs, and ambled on up the railroad bed for about three-quarters of a mile.

At a side canyon, a tour-group of a dozen or so people was collected in front of interpretive signs, including one with a silhouette of a person wearing no clothes and the words: “Warning: Naked People.” That was a first! (The mine and surrounding area are owned by the Orient Land Trust, part of Valley View Hot Springs, a “naturist” resort.) 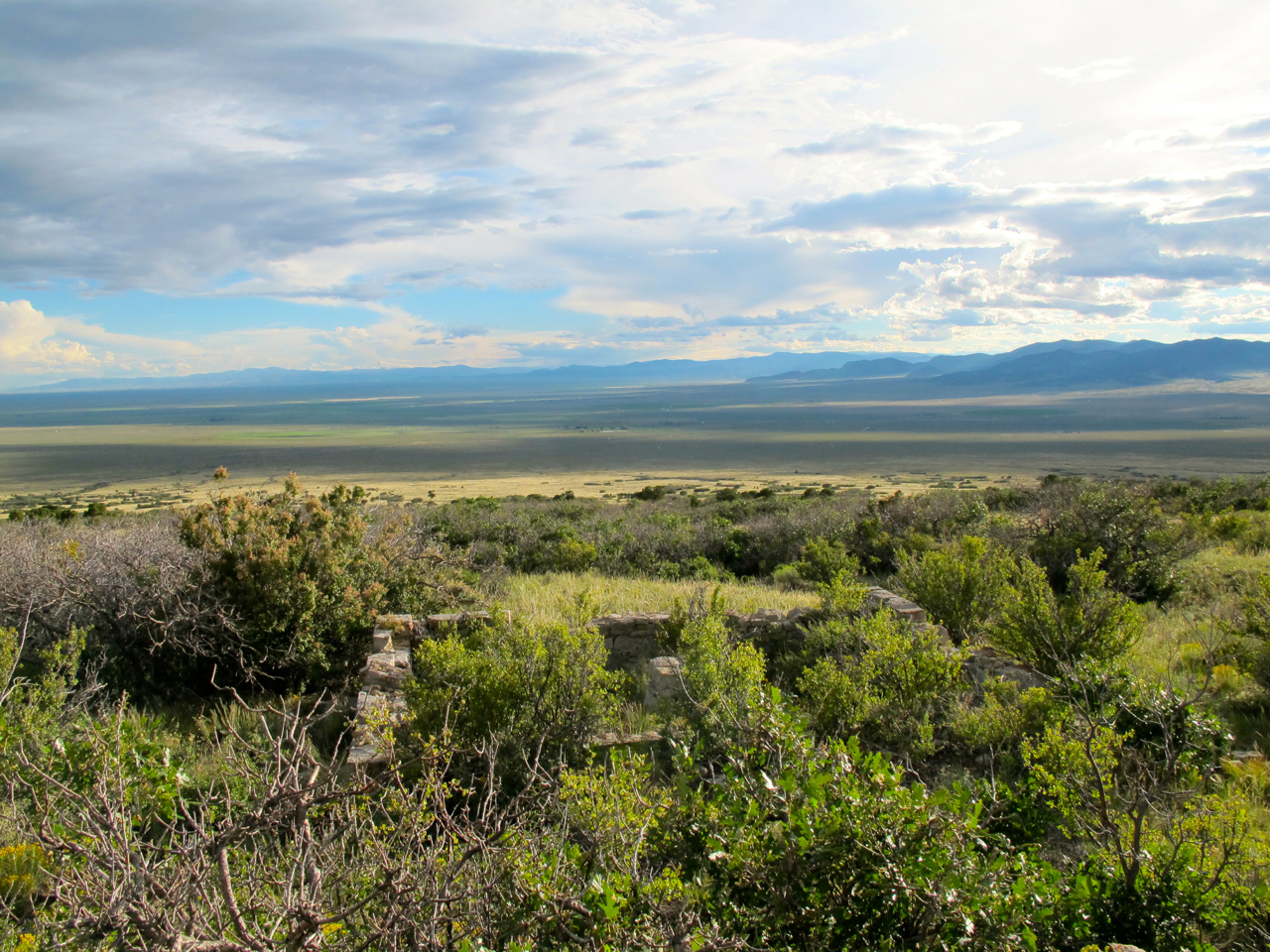 A cut limestone foundation below the old railroad grade.

Orient, the town that served the mine, was occupied from about 1880 until 1932, and at its height, boasted more than 400 residents living and mining at almost 9,000 feet elevation.

We wove our way through the tour and the overgrown building foundations, and then followed the trail climbing steeply through the oak-brush out of the canyon and around the face of the mountain. 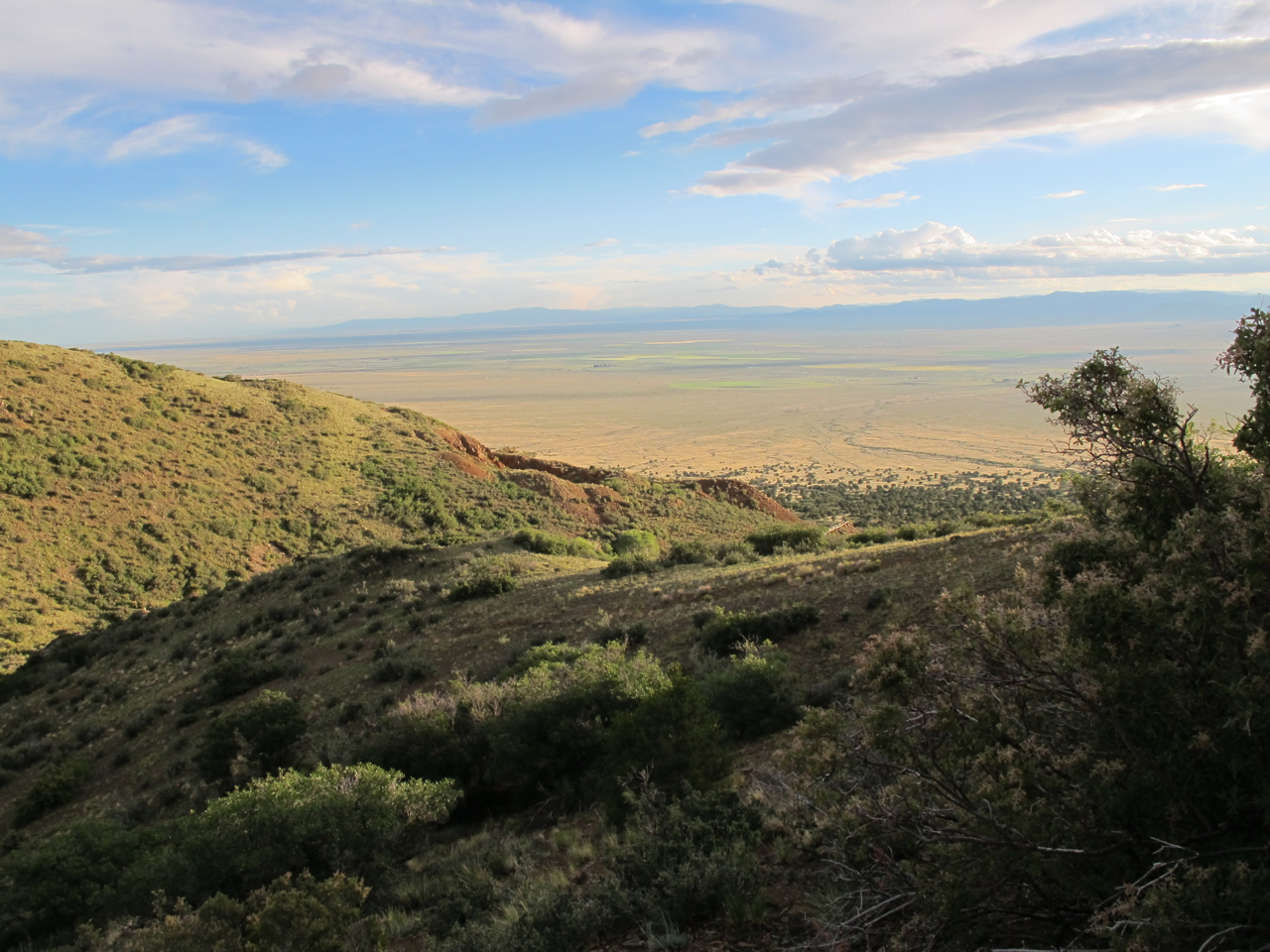 Looking southwest across the San Luis Valley at the San Juan Mountains in the distance.

The sun was slanting low, but we reached the viewing site at the mine in time to eat our picnic dinners before dusk, when the bats would begin to fly out. 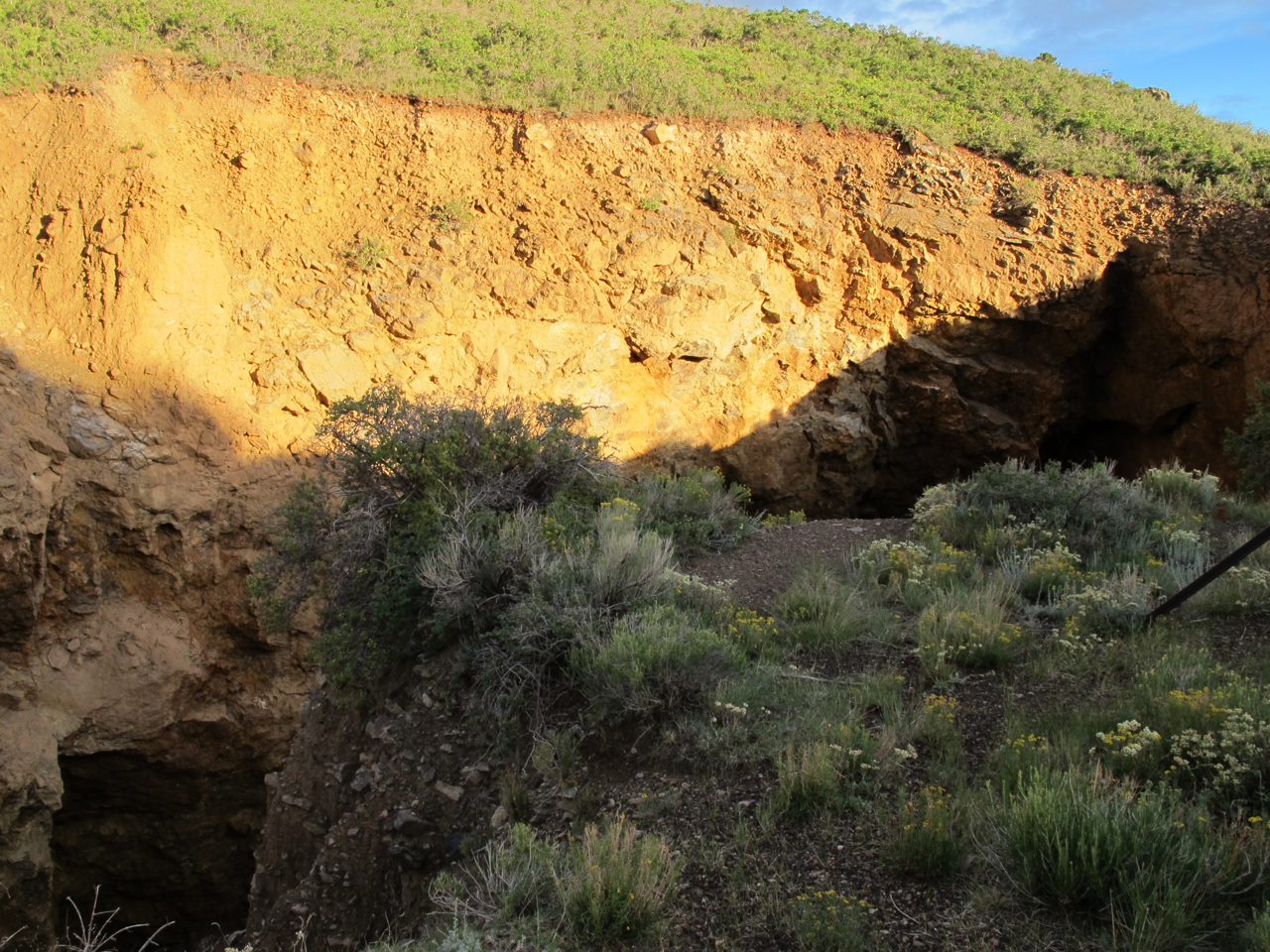 Part of the cliff face above the collapsed roof of the mine (mine opening on the lower left).

We watched a spectacular sunset while listening to a Poor-will call “poor-will! poor-will!” as swifts nesting on the cliff face chattered at a pair of ravens. Lovely dinner music! 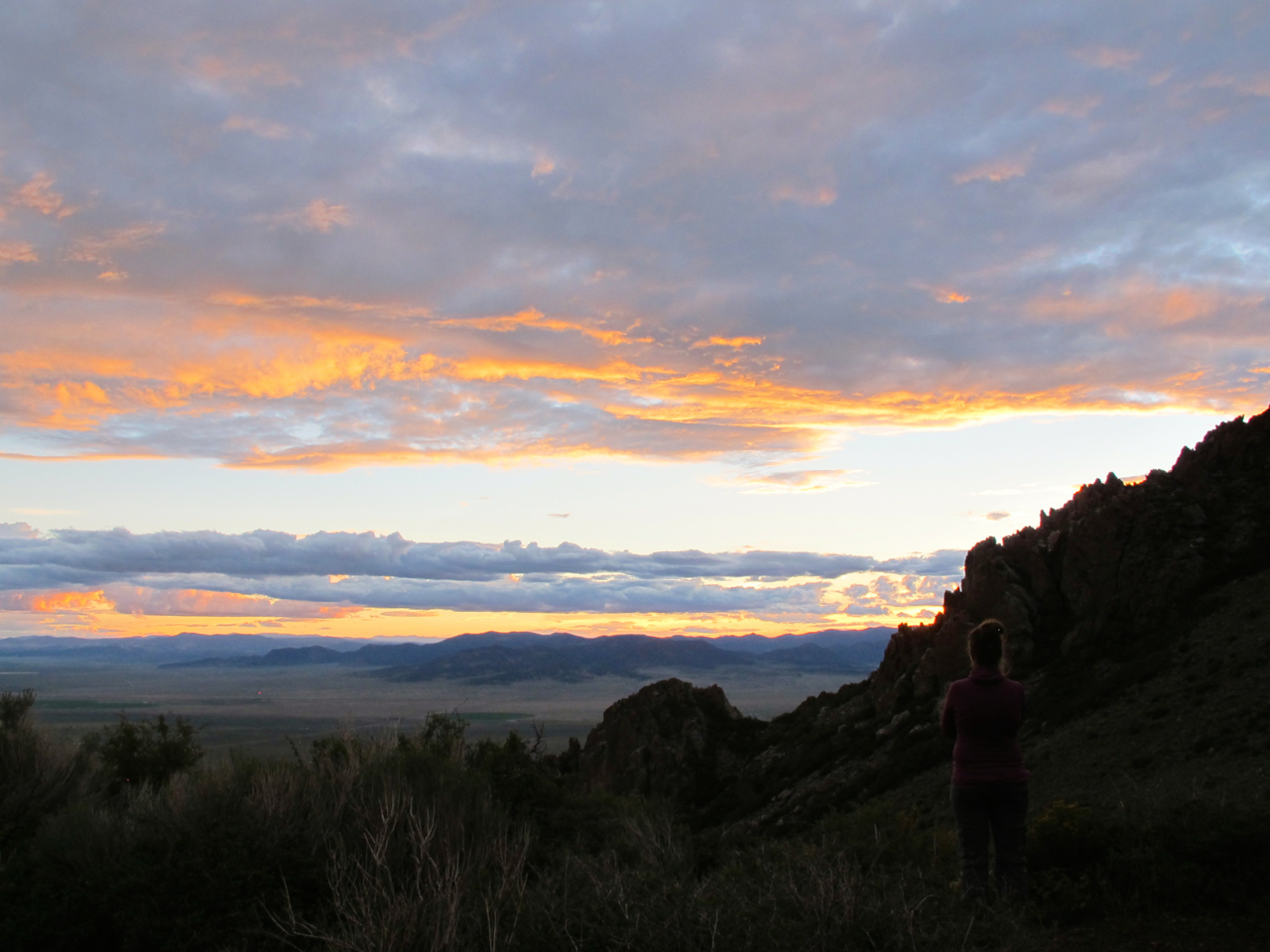 The last of the sunset colors….

Then, just as the light began to fade, winged bodies began to hurtle overhead, first a few dozen, then a hundred or so, and then finally tens of thousands in a stream of bat bodies fluttering, jostling and occasionally chattering at a low enough frequency we could hear it.

As the stream of bats swelled, their fluttering wings sounded like a river rushing past overhead. 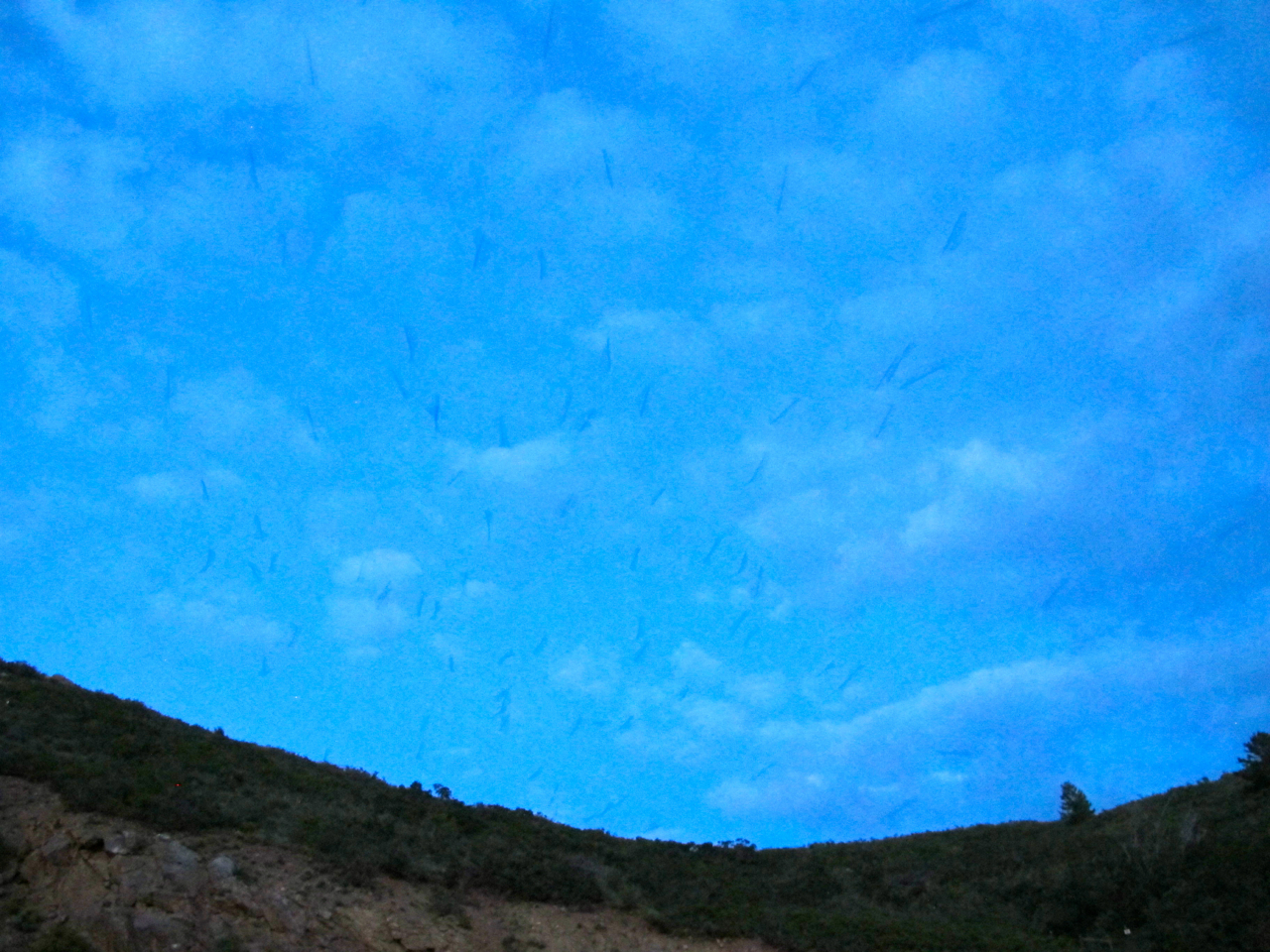 It was too dark for my camera to stop the bats’ motion, hence the bat streaks against the sky.

Mexican Free-tails are long-distance flyers, using their long, narrow wings to power as fast as 40 miles per hour (they’ve been clocked going sixty with a tail wind) and to reach altitudes of 10,000 feet. They winter in caves in central and northern Mexico, migrating as far as a thousand miles each way.

The bats continued pouring downhill on the night air, headed off to eat their fill of moths, beetles, and other flying insects, which they catch in mid-air. They would fly all night and return at dawn. 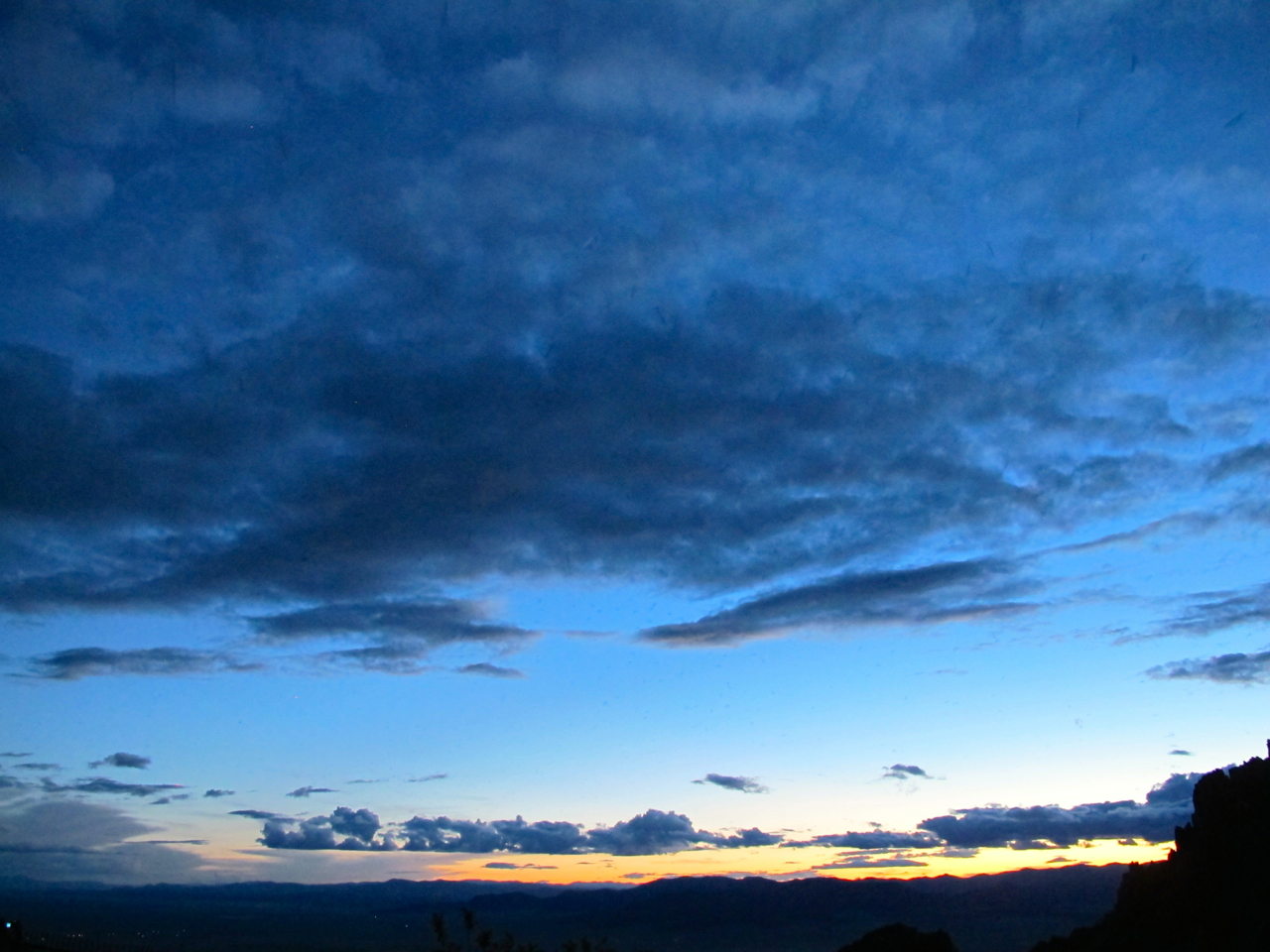 Last light: the streaky shadows in the clouds are actually bats….

Maggie and Tony and I headed out too, picking our way down the trail in the darkness, stopping now and then to admire the stars.

By the time we reached Red, it was full dark. The Milky Way stretched across the sky like a sparkling river, or like a river of bats off to forage all night….