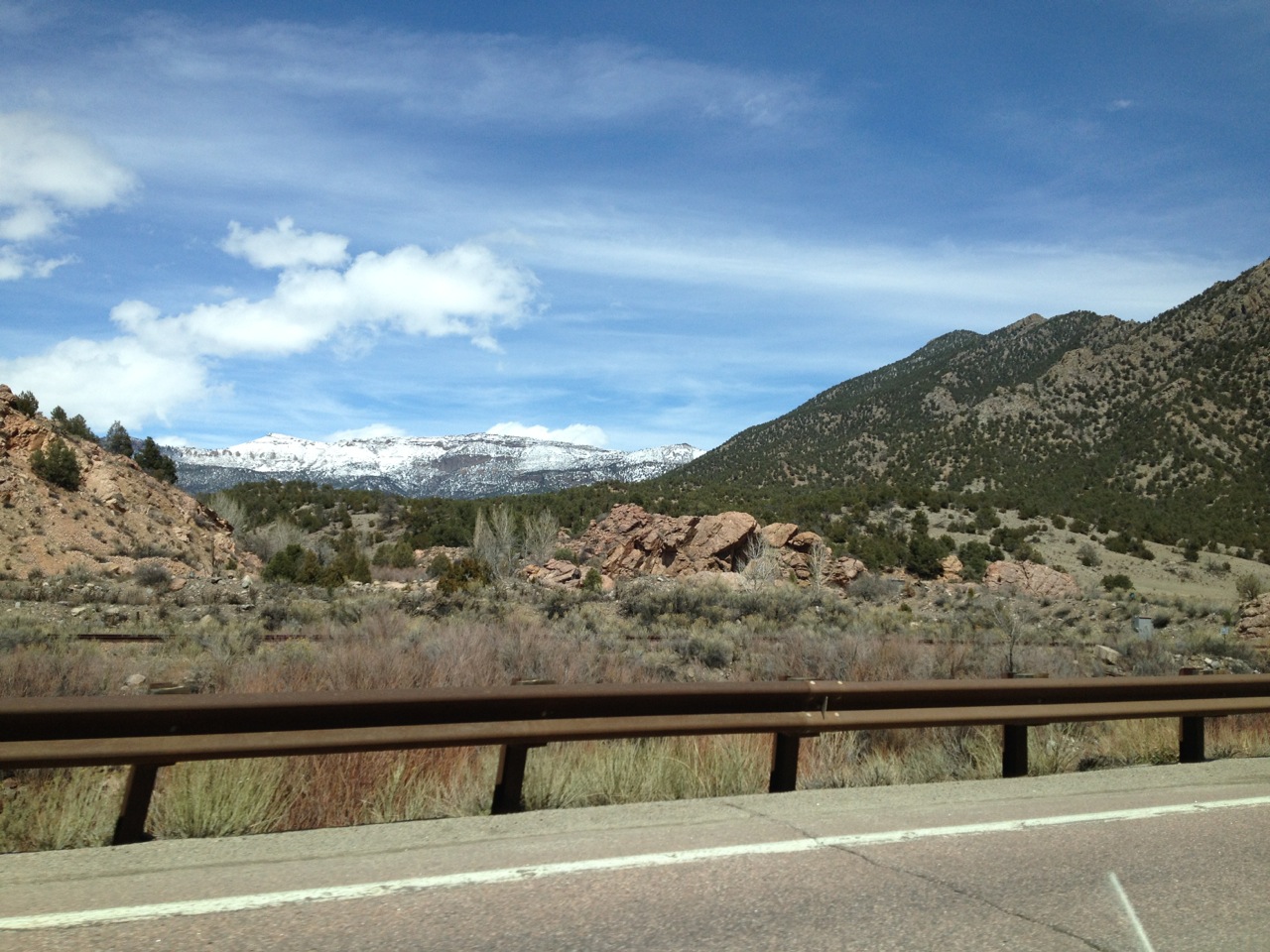 Spring snow on the mesas above the river canyon.

I had planned to curl up on the couch and write a blog post last night, as I usually do on Sundays. Only Saturday wore me out. I taught back-to-back wildscape workshops in Pueblo for the Habitat Hero project, and then hopped in the car to make the two-hour trip home into the mountains.

It had been sunny and beautiful the day before when I left home. But Saturday evening, snow showers dangled over the high ridges as I wound into Bighorn Sheep Canyon. 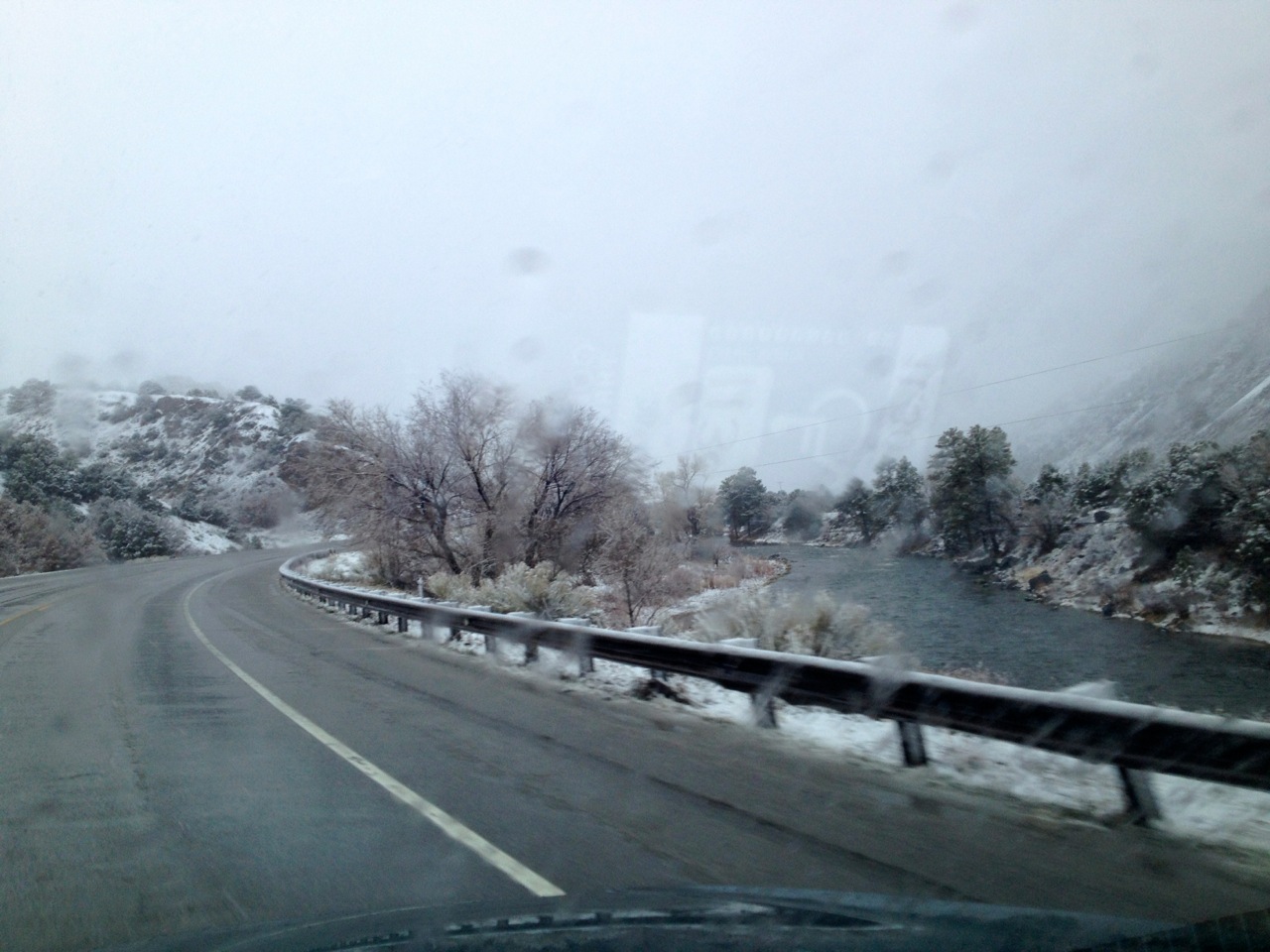 Those showers dragged lower and became rain, and then wet, sloppy snow. Hence the windshield shot above, taken right before the snow got so bad I just drove.

Still, I made it home in time to dash into Ploughboy Market before it closed to buy milk–fresh and sweet in a returnable glass bottle–for my morning hot chocolate.

The next morning I lazed around, letting my energy seep back as I read the newspaper, drank that hot chocolate, paid a few bills, and answered emails. By afternoon it was so lovely out that I decided to just move a few rocks in my new landscape…. 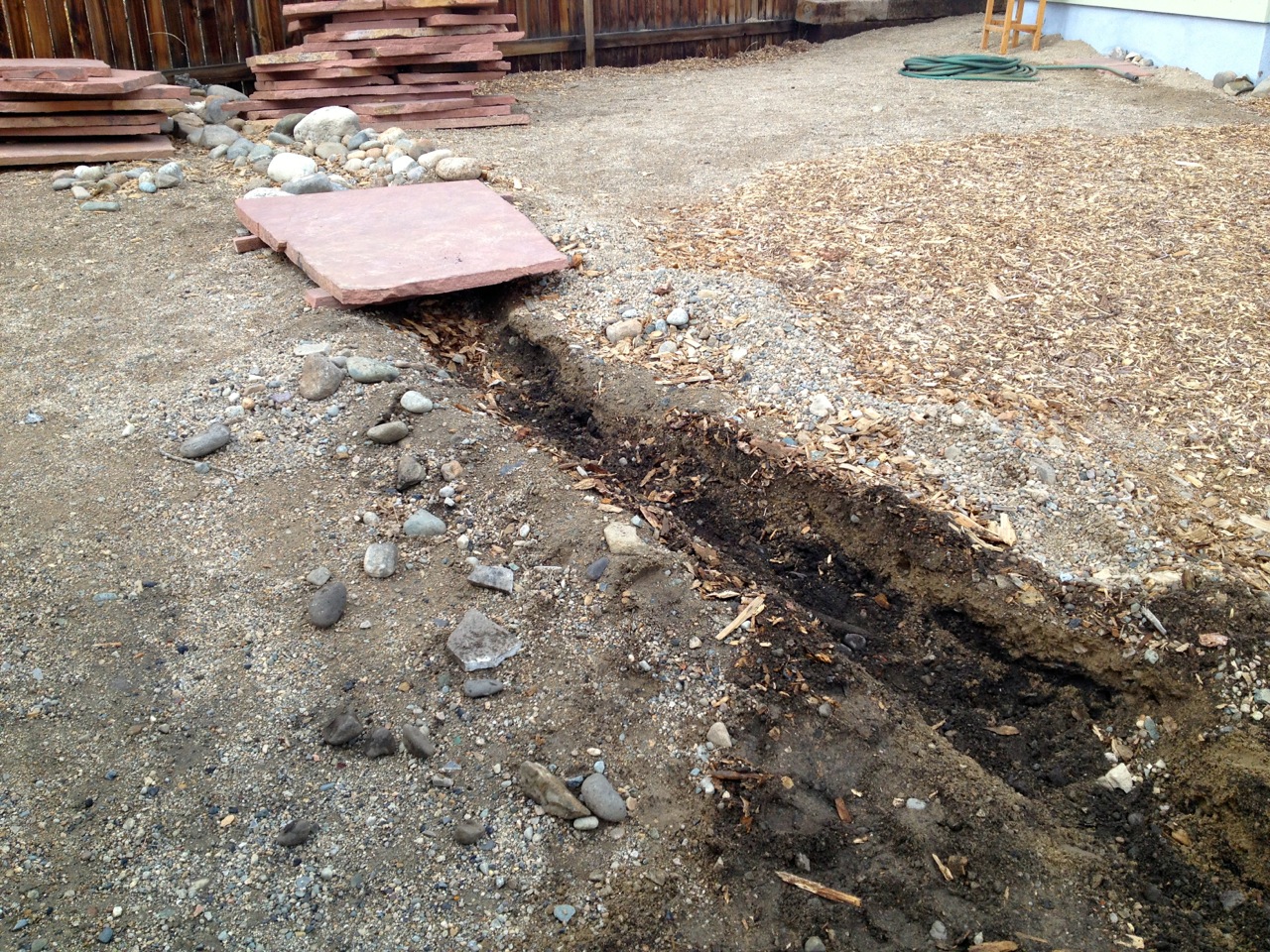 The dry stream bed-to-be: the “headwaters” is cobbled and has a flagstone bridge; the lower part I’m still digging.

Moving half a dozen buckets of rocks led to spreading a cubic yard or so of mulch, moving a little gravel for the beginnings of a path, pulling some early weeds, and then getting out the mattock and digging another section of the dry stream bed that will drain the courtyard between the house and the garage/studio. 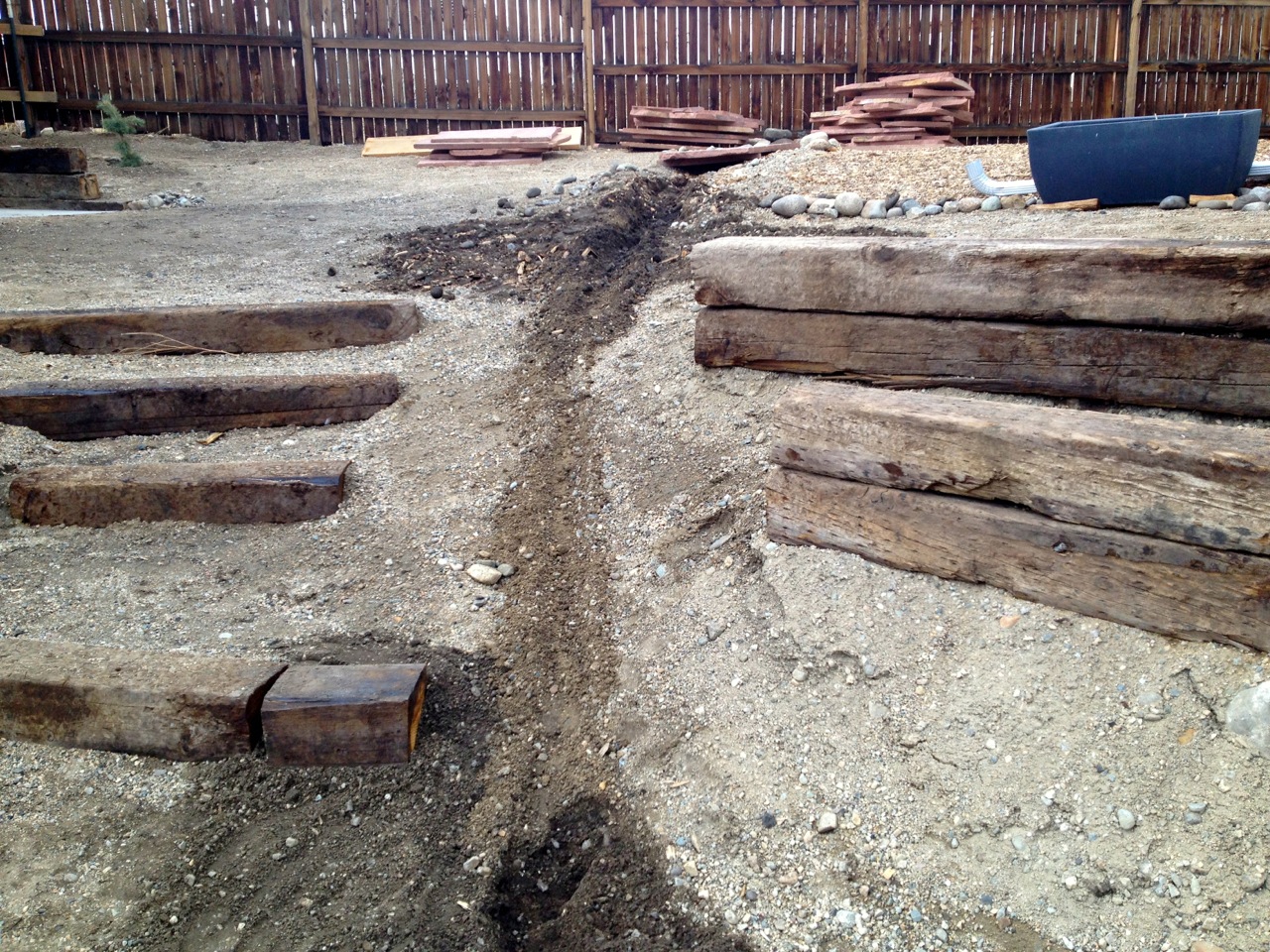 “Lower falls,” where the dry stream will cascade down the slope below the house.

By the time I finished all that and came inside to clean up, I was exhausted all over again, but in a righteously sweaty, physical way. I figured I’d make dinner and curl up on the couch to finally write that blog post.

Only my nephew Andrew came over, the one who has Richard’s woodworking meme, and we hung out for a couple of hours to catch up. (Andrew lives in Fort Collins has two kids and a crazy-busy life.) 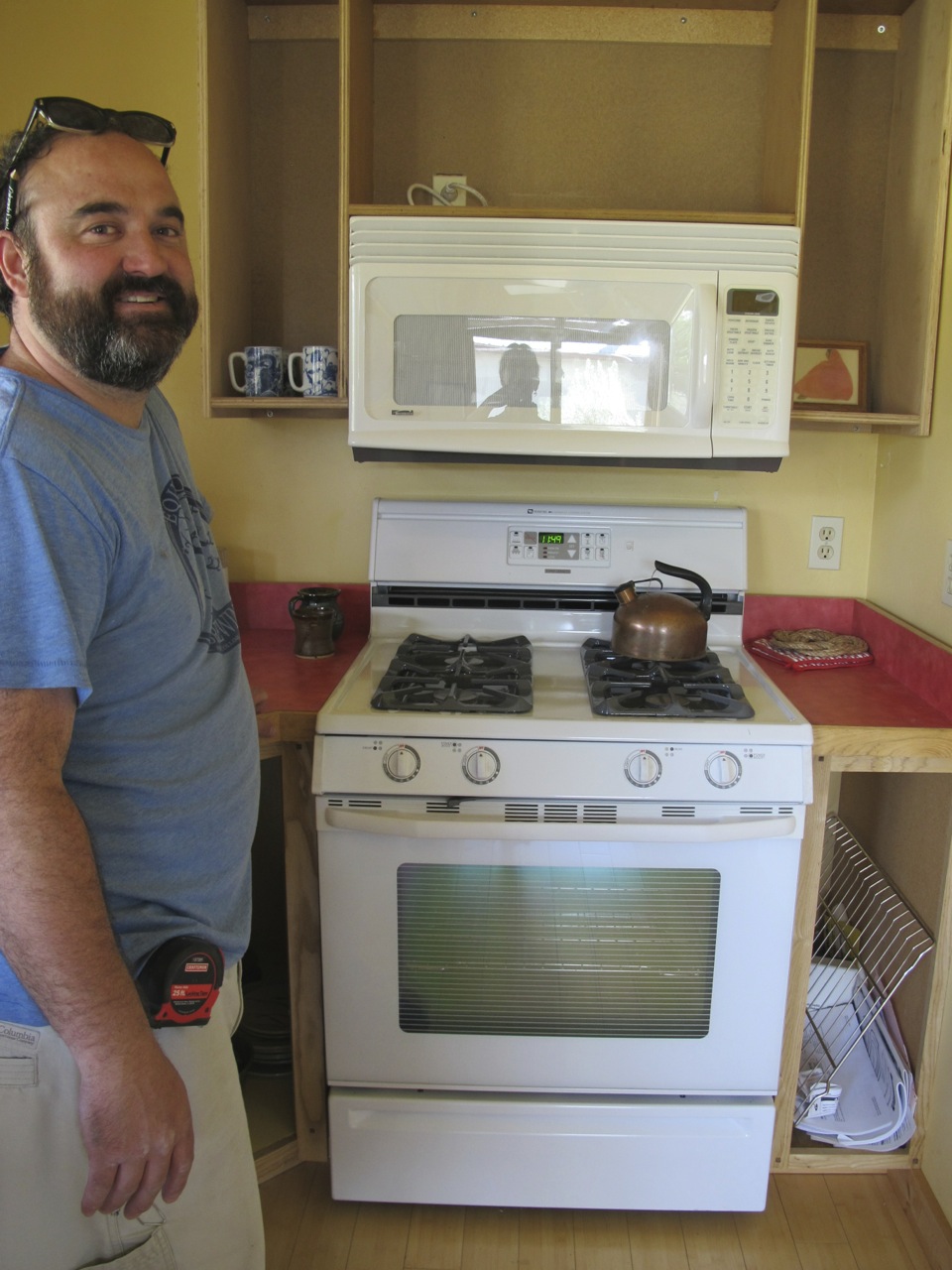 Andrew with the cabinet he installed over the stove in the guest cottage at Terraphilia.

By the time he left, it was late, and my energy really was shot.

Today I was itching to write but I had busy-work to do after being on the road, and then suffered through a conference call where “giving constructive criticism” really meant defensiveness and finding fault.

After that, I was feeling low and whiny. So I sent myself outside for an attitude adjustment. 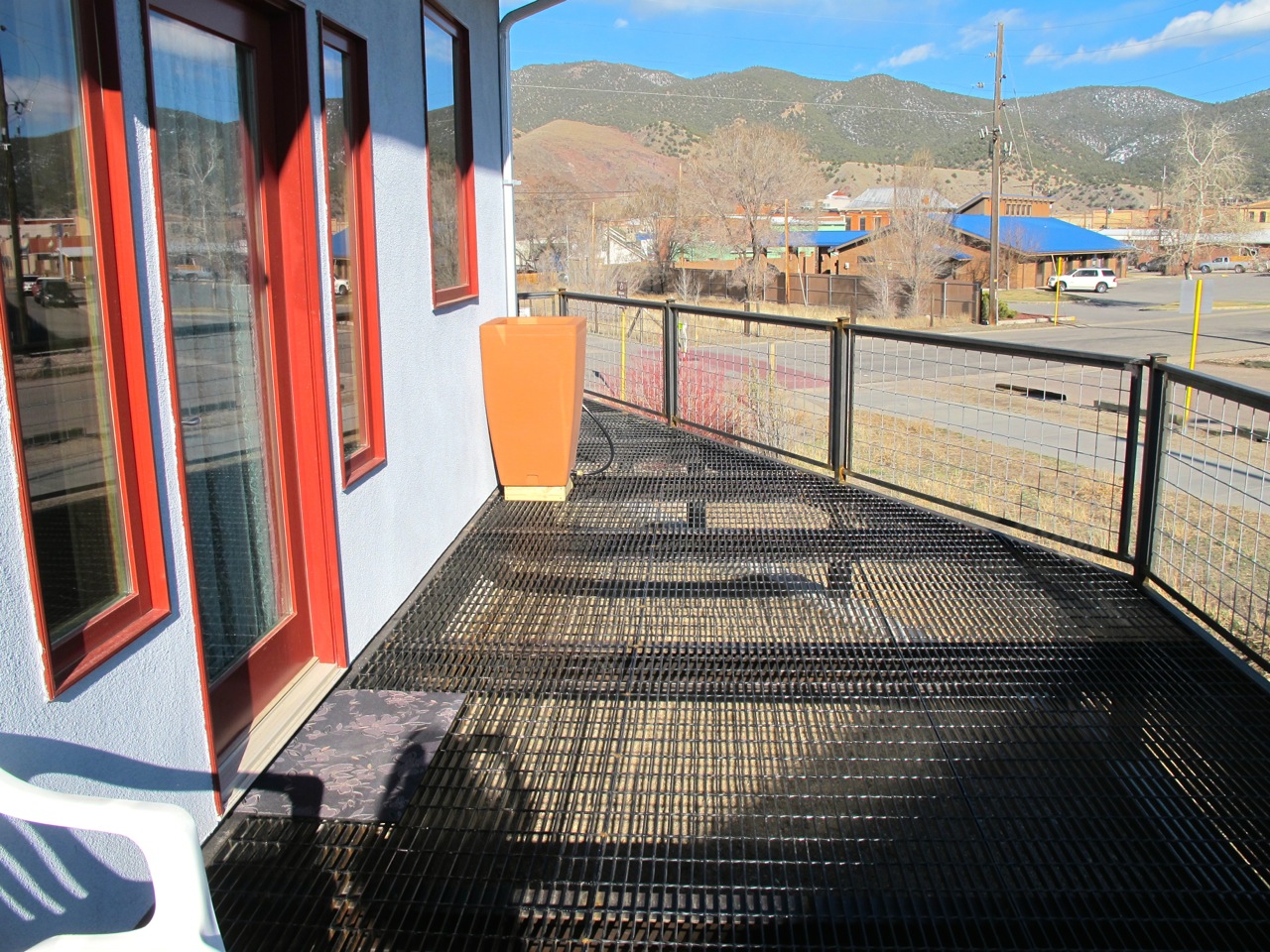 The view from my front door, including new deck railings.

And smiled when I remembered that my front deck now has railings. (It’s a complicated custom deck, and Lex Johnson, my steel guy, is very good, and very busy. So it’s been a slow project.)

And the daffodils were poking up around the crabapple trees in the front yard, which themselves have tiny red leaves. 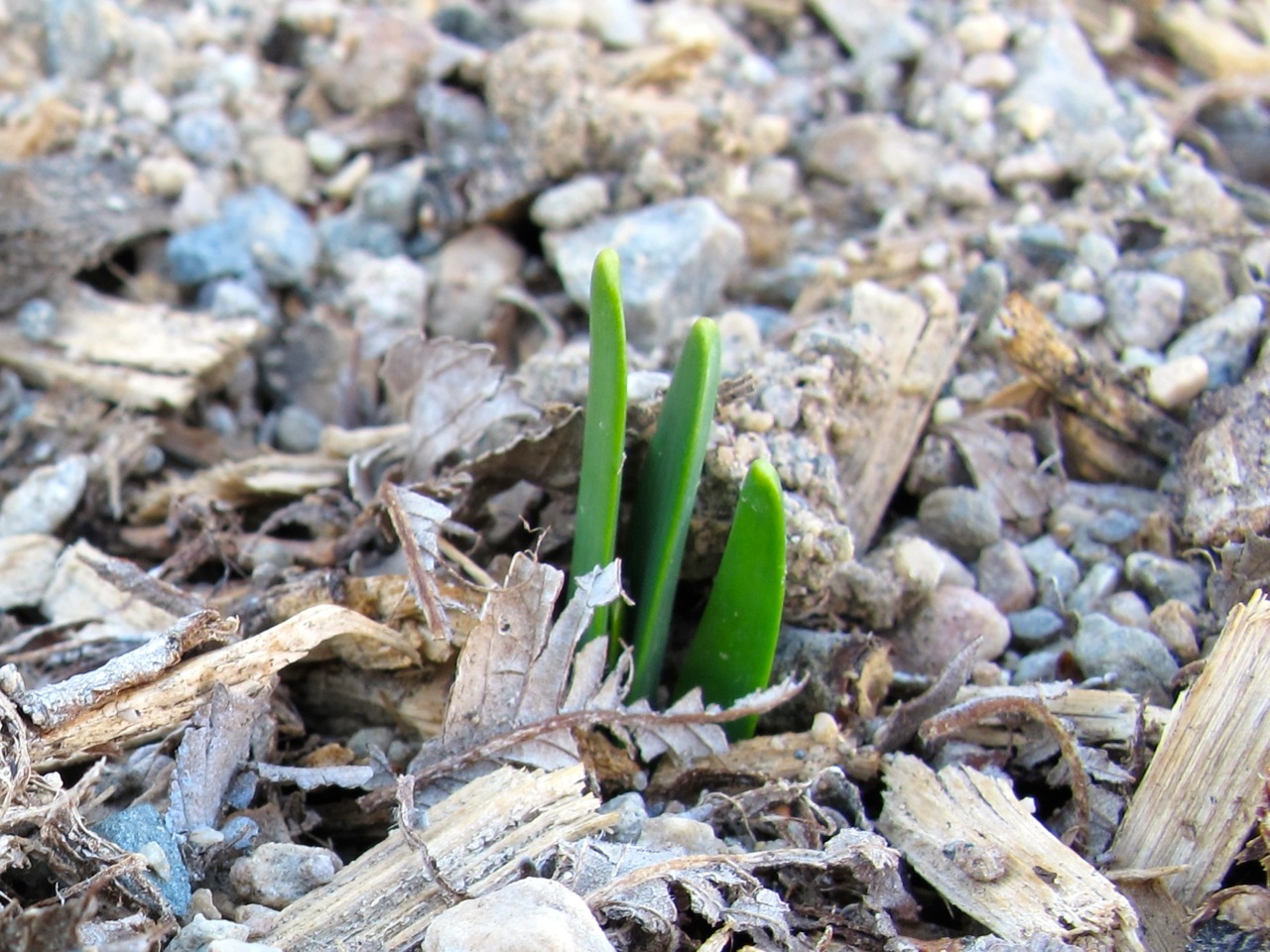 Daffodil leaves appear through the mulch.

And the sun shone.

Some days are like that: Things go south and I feel sorry for myself. I mope and whine. In truth, I have good reasons to wallow, not least of which is figuring out this life after Richard.

Wallowing and whining is not really how I want to be though. So I send myself outside.

Where it’s still spring, the mountains still draw snowy rick-rack on the horizon, where if I look I can find tiny green sprouts of wildflowers and native grasses under the mulch the wind hasn’t blown away…

And I’m alive to feel the joy of it all. Which is what matters most. Especially when it’s been one of those days.