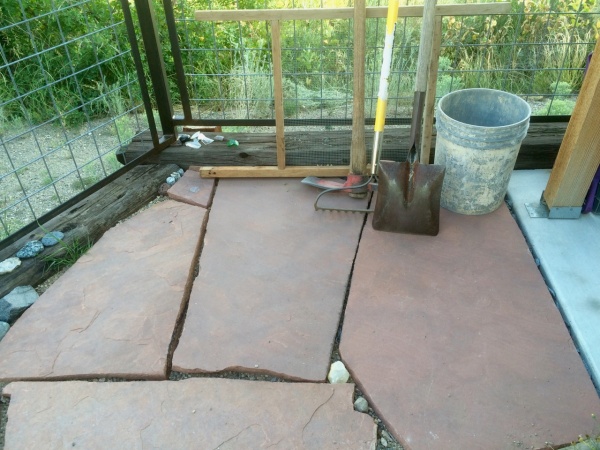 On weekends, I put the creative energy I use for writing into homework: projects around my little house and yard.

This weekend, I was determined to make more progress on the flagstone dining patio I’m laying on the east side of the garage/studio. I had laid the first four flagstones early this summer, when the ground was still moist and workable.

Now after weeks without rain, the rocky, compacted ground is dry and hard. Which means digging a bed for flagstones requires some serious muscle. 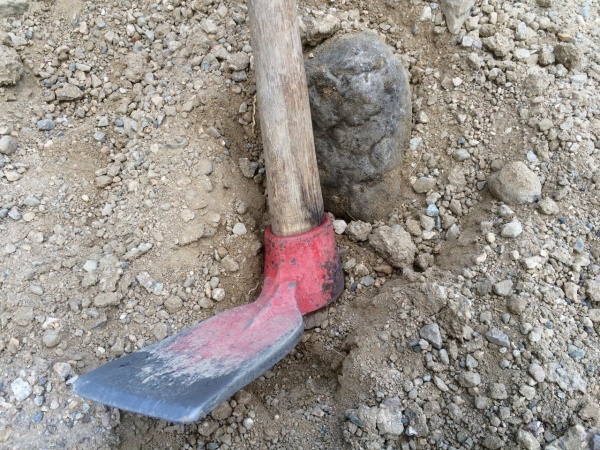 My favorite digging tool, a well-used mattock with a pointed blade at one end and a scooping blade at the other. The granite river rock I’m prying out there is about half the size of my head and weighs a good ten pounds.

Fortunately, after the past two-plus years of finish carpenty and construction work, plus landscaping, I’m pretty buff. And I have good tools.

I woke yesterday morning feeling a little cranky and out-of-sorts, unusual for me. I figured that honest manual labor would put me in a better mood, so after I finished my household chores, I got out my mattock, industrial strength rake, flat-bottomed shovel, and the screen Richard made me when he taught me how to lay flagstone. 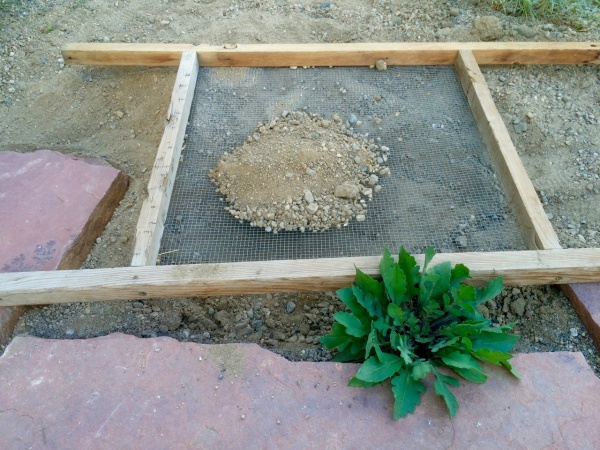 The screen in use

And I set to work loosening the hard-packed ground, prying out rocks, and screening the rubble. The fine material serves as a bed for the flagstones, the gravel-sized rocks go on a nearby path, and I set aside the larger rocks for other landscaping work.

A couple of sweaty hours later, I had laid three flagstones, and used up all of my energy. But my mood was significantly better.

I felt so good, in fact, that I figured I’d put in another few hours today if I wasn’t too sore. Which I wasn’t, although I woke feeling curiously out-of-sorts again.

This afternoon, I whaled away with the mattock and loosened up another section of ground, raked and screened, and laid two smaller flagstones. (Smaller meaning they weigh less than about 75 pounds and I can move them by myself.) 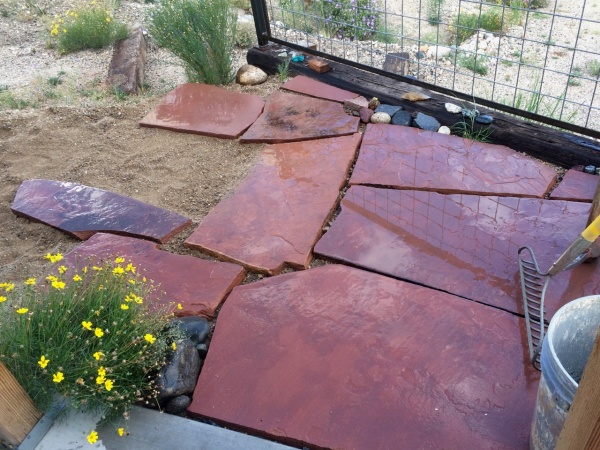 The flags I laid this weekend are the five on the left side of the photo.

Then I spent measured some of the big flagstones in my stack to find one that was the right size for the gap between the flags I had just laid.

(I don’t cut the flagstones to fit–it’s more fun to use the shapes as I find them, fitting them together like pieces in a puzzle. Sometimes they fit closely, sometimes not so much and I fill in between them with tightly packed gravel. I enjoy the creative process and seeing the pattern emerge.)

I found one that I think will work, and then tried to figure out how I could slide it down the hill from the stack to the patio. But it’s simply too big for me to handle, so I’ll wait until I can get someone to help me move it. 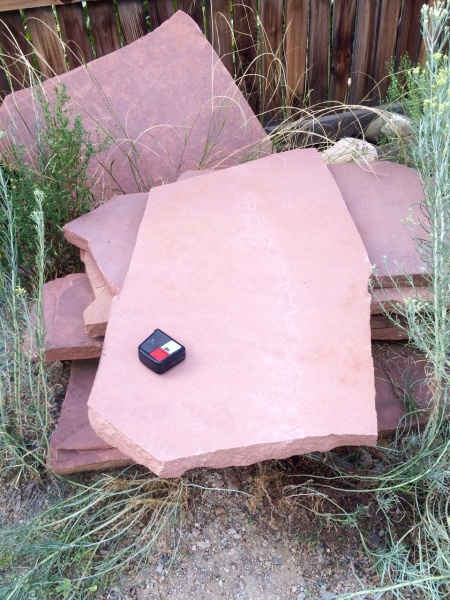 The tape measure marks my chosen stone: It’s almost two feet wide by four feet long, and about three inches thick. I figure it weighs about 150 pounds, or 40 pounds more than I do!

As I was cleaning up and stowing my tools, I had Richard on my mind: except for the screen, which he made for me, the tools are his.

And I realized why my mood was low. Six years ago this very weekend, Richard and I were headed to a joint artist/writer residency in the San Juan Mountains, two weeks of time out that we both badly needed. The Sunday morning we were to drive to the cabin and settle in, he began seeing birds.

Thousands of them. Birds no one else could see; hallucinations that were the only major symptom of the tumor growing in his brain that would eventually kill him. 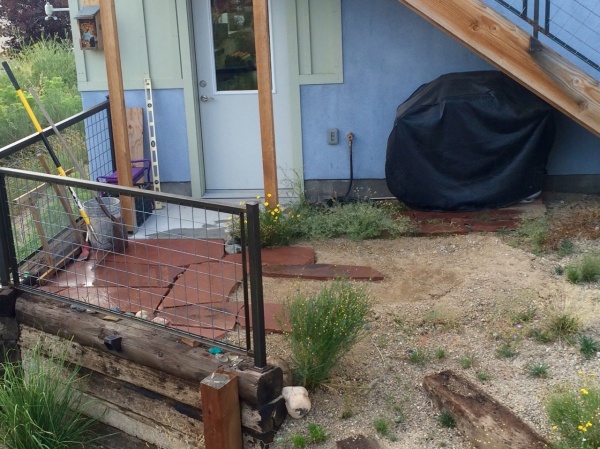 As I was writing this post, I thought about why I find it so tremendously satisfying to lay flagstone. Part of that satisfaction comes from knowing that I am capable of the hard physical work. Another part comes from being able to use my muscle and creativity to work with rock and earth, and create sculptural forms.

That love of using muscle and creativity to sculpt stone, steel and wood into abstract forms is part of what motivated Richard’s art; creating pieces that expressed his love for the common materials that speak of the beauty of this earth.

It seems fitting that on this anniversary of the birds, the hallucinations that wrenched apart our life the way a catastrophic earthquake dramatically reshapes solid ground, I would feel compelled to lay flagstones, using the tools and skills taught me by the man who held my hand and my heart for almost 29 years. The man I love still–and always will. 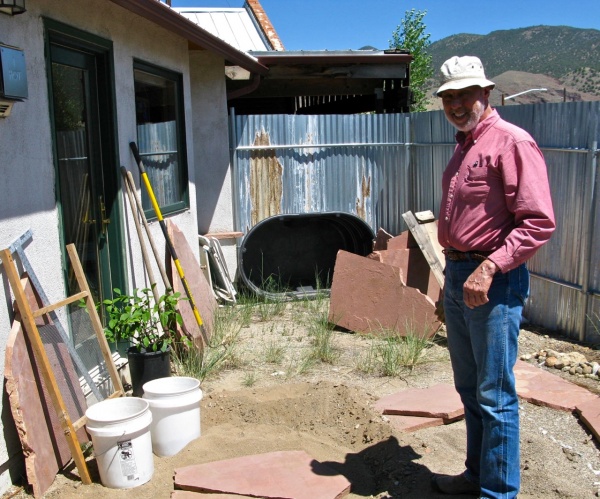 Richard Cabe, his face steroid-puffy, his right brain and vision both impaired, but his hands still sure when they touch the rock, smiling as he demonstrates how to lay flagstones, three months before he died…