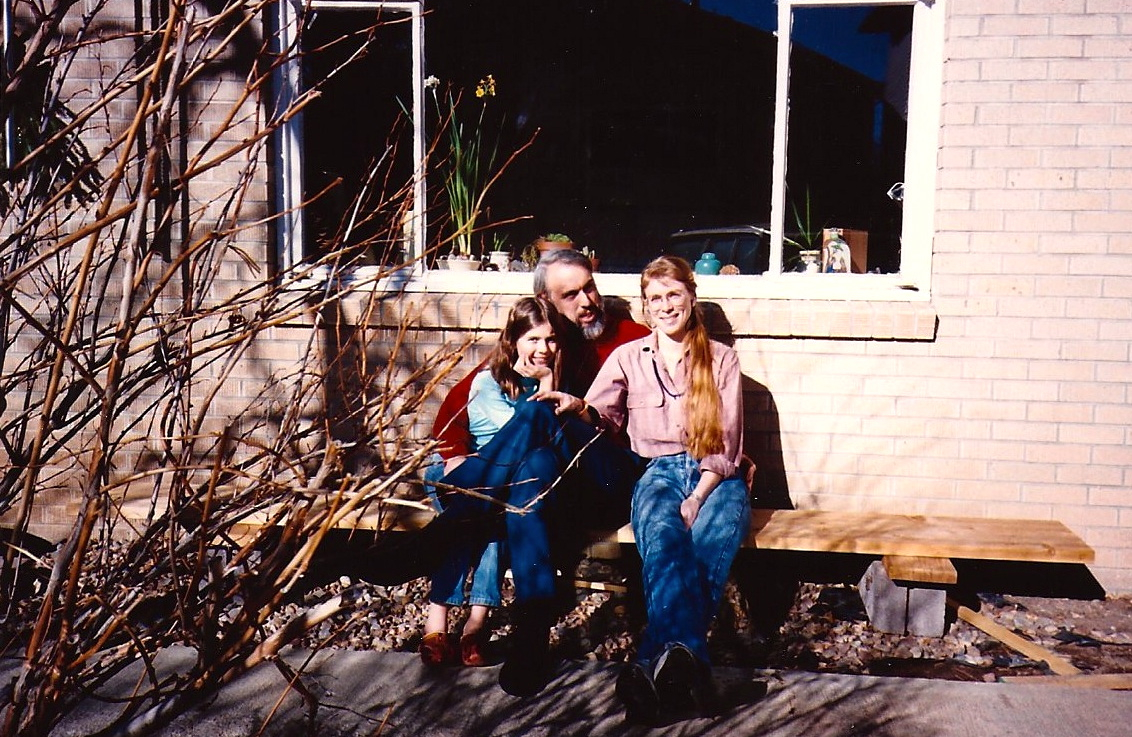 Molly, Richard and me in Boulder (we had an old Volvo station wagon then)

For the past several decades, with the exception of a refurbished VW camper van and the Isuzu Trooper that became Richard’s boulder-hauling vehicle, I have driven a series of sensible, family hauling, gas-sipping station wagons and vans.

Before I met Richard though, I drove pickup trucks (I was probably the only Birkenstock-wearing pickup-truck driver in Wyoming then).

On our first and only date, my dark blue Datsun long-bed with a five-speed manual transmission carried us safely over the Medicine Bow Mountains in January to the hot springs at Saratoga, Wyoming.

It’s interesting that I remember not only what color that Datsun pickup was, and the length of the bed–long-beds were long enough to sleep in, which I did, many times–but also the fact that it was a five-speed manual tranny.

Ask me what color the Subaru hatchback we traded it for when we moved with Molly to West Virgina for Richard’s first teaching job. Yellow? White? Tan? Something like that. 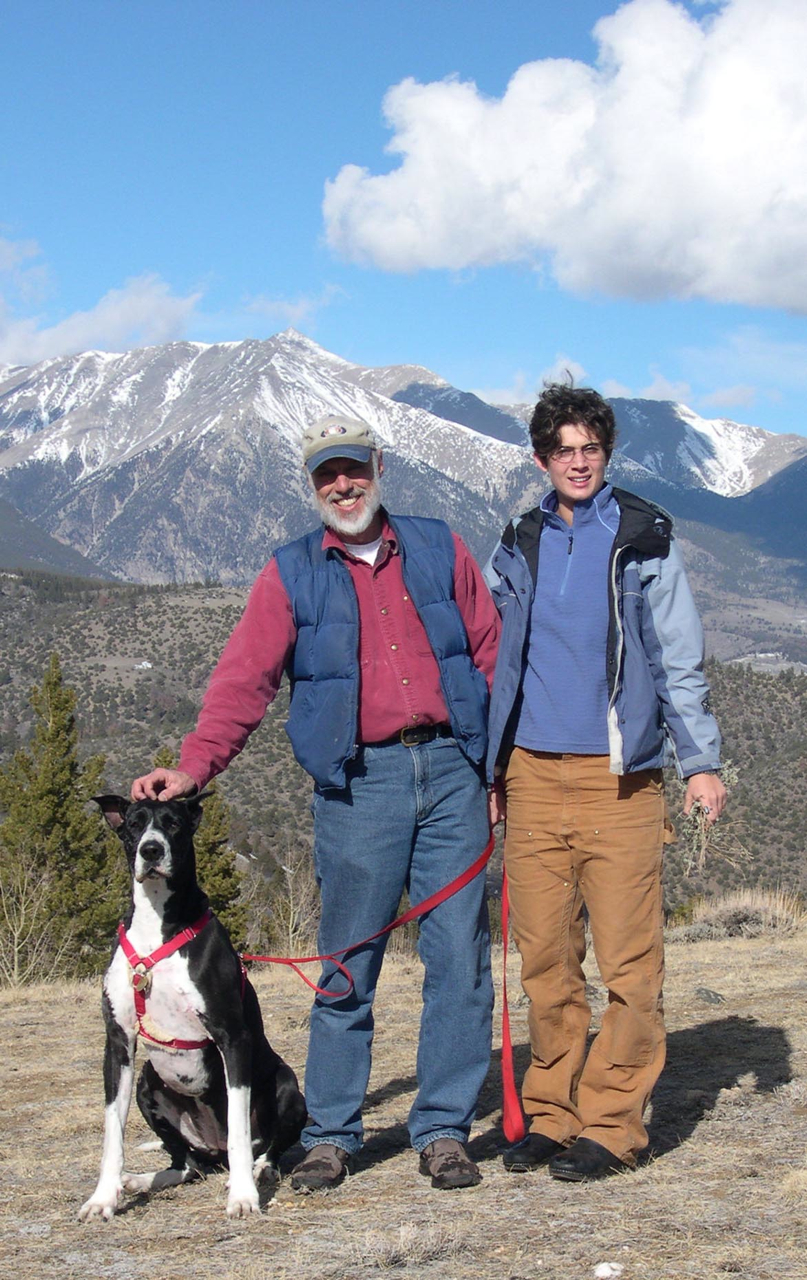 Isis, our Great Dane, Richard and Molly in the mountains.

There was one brief and glorious year when we became empty-nesters and I convinced Richard, who really didn’t care what he drove as long as the driver’s seat was comfortable, that we should go camping again.

So we bought a Toyota Tundra with a topper on the back which we did actually camp in on its only road trip, a swing through Grand Teton and Yellowstone national parks.

A few months after we got home, Mom had a hip replacement and it was hard for her to climb into the cab, so we traded the Tundra for a van. And then several years later, we traded that for a Subaru Forester, which sipped gas and was perfect for hauling elderly parents. And commuting to Denver for brain-cancer treatments. 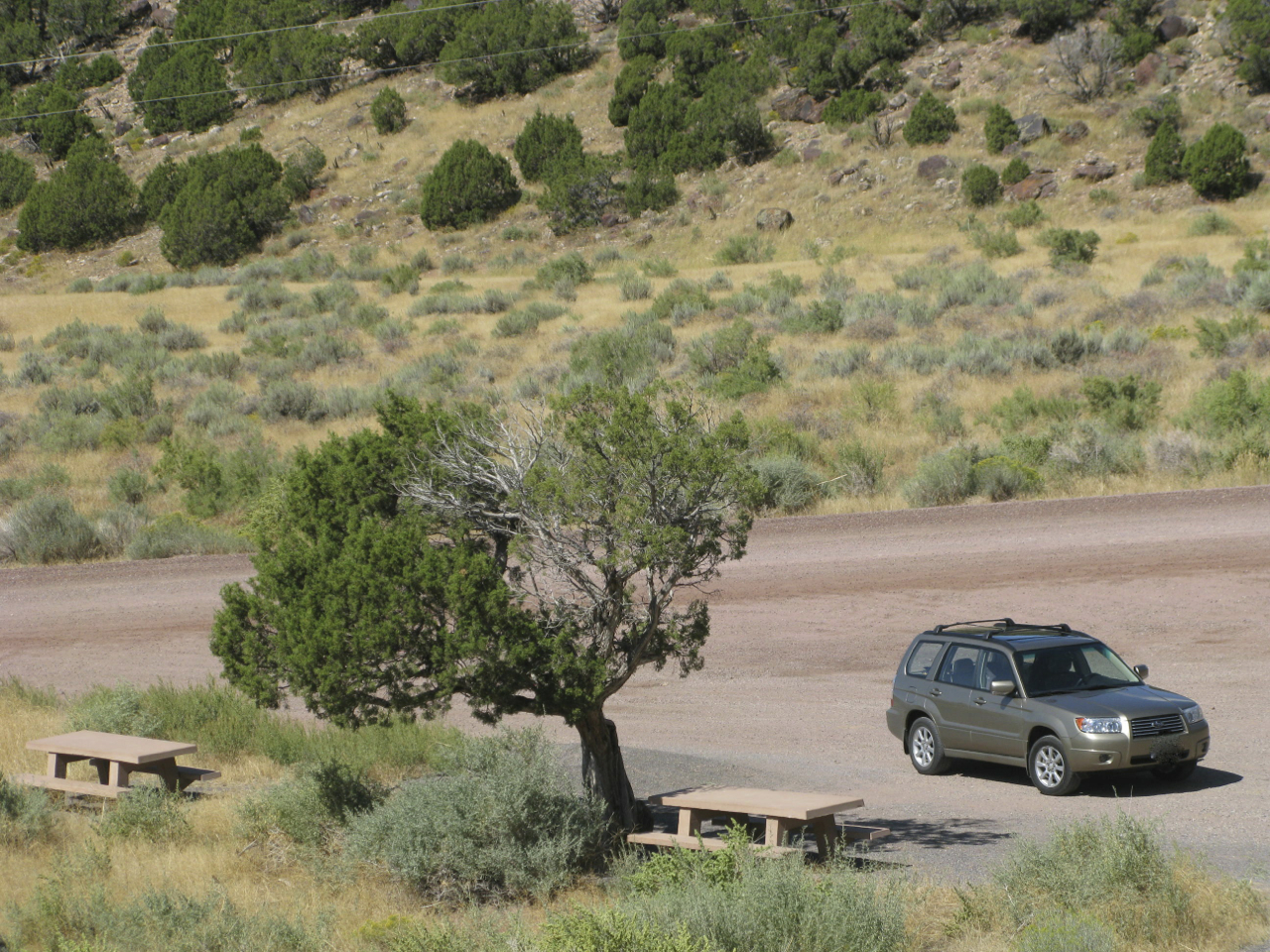 The Forester at the petroglyphs in Irish Canyon, Colorado.

After Richard died, I figured I’d drive a Forester forever. I even took it camping, but I had some creepy experiences, so I quit that.

Last winter sometime, I began fantasizing about a pickup. Something small with four-wheel drive for traction and a topper that I could sleep in without being obvious about it.

It seemed like such a frivolous thing to do. I’d be trading down in terms of gas mileage (but I only drive when I’m headed out-of-town; otherwise I walk or ride my bike), and it would require me to spend some of my savings. (I do not go into debt.)

I figured the idea would go away eventually, like the flu. Only it didn’t. 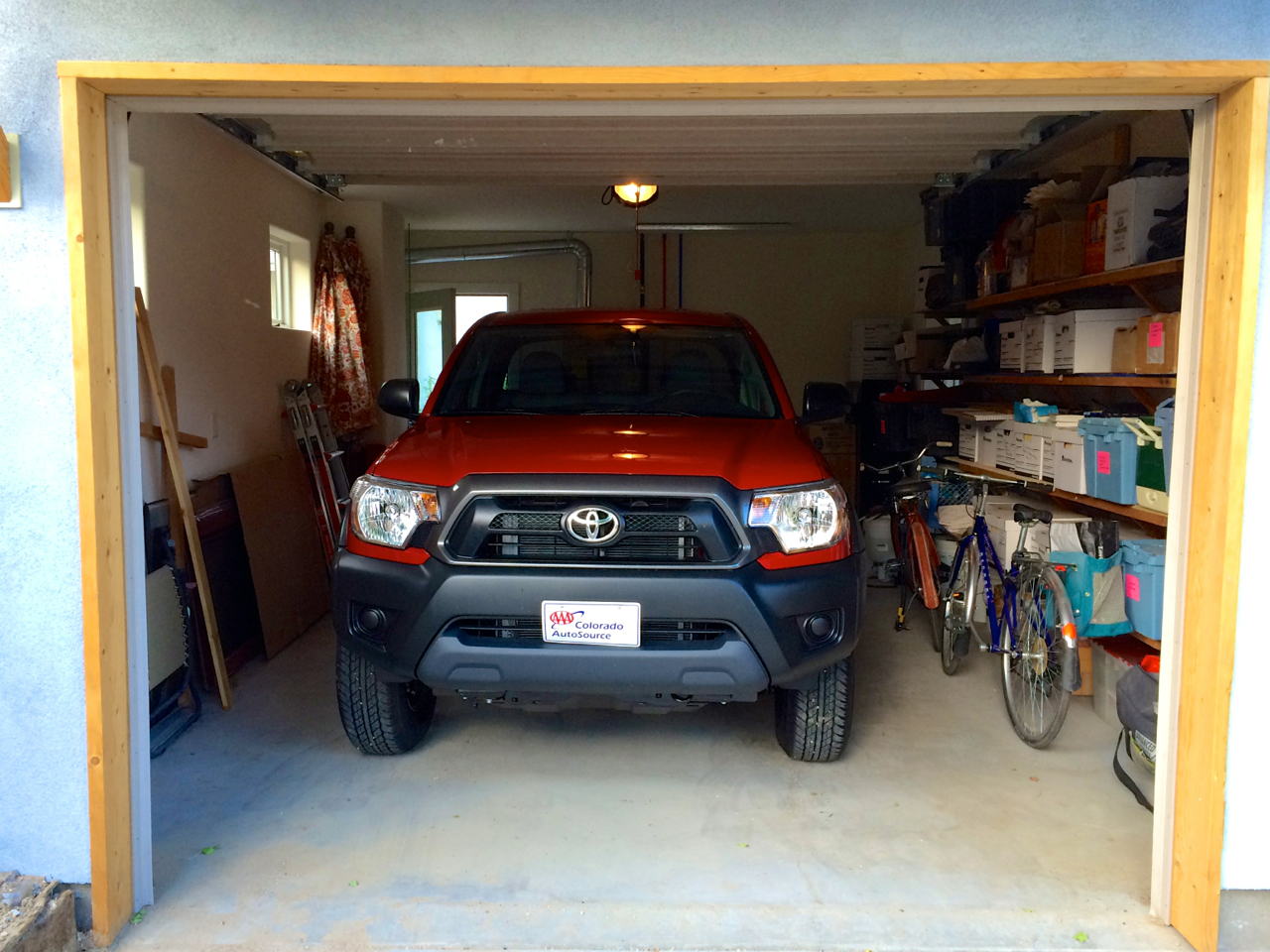 A truck? In my tiny garage?

I knew what I wanted: a Toyota Tacoma with a cab and a half, a six-foot-bed, four-wheel drive and a topper.

Last month I talked to Brian at AAA AutoSource (a service for AAA members that is considerably cheaper and easier than going to a car dealer). When he quoted me the difference between the trade-in for my Forester and the new Tacoma, I realized I could actually do it.

I thought for about twenty seconds, gulped, and then told him to go ahead. Two weeks ago I drove to Colorado Springs to pick up my truck.

Brian showed me how everything worked and we did paperwork. And then I climbed in and off I drove in my new pickup (the topper was on backorder). 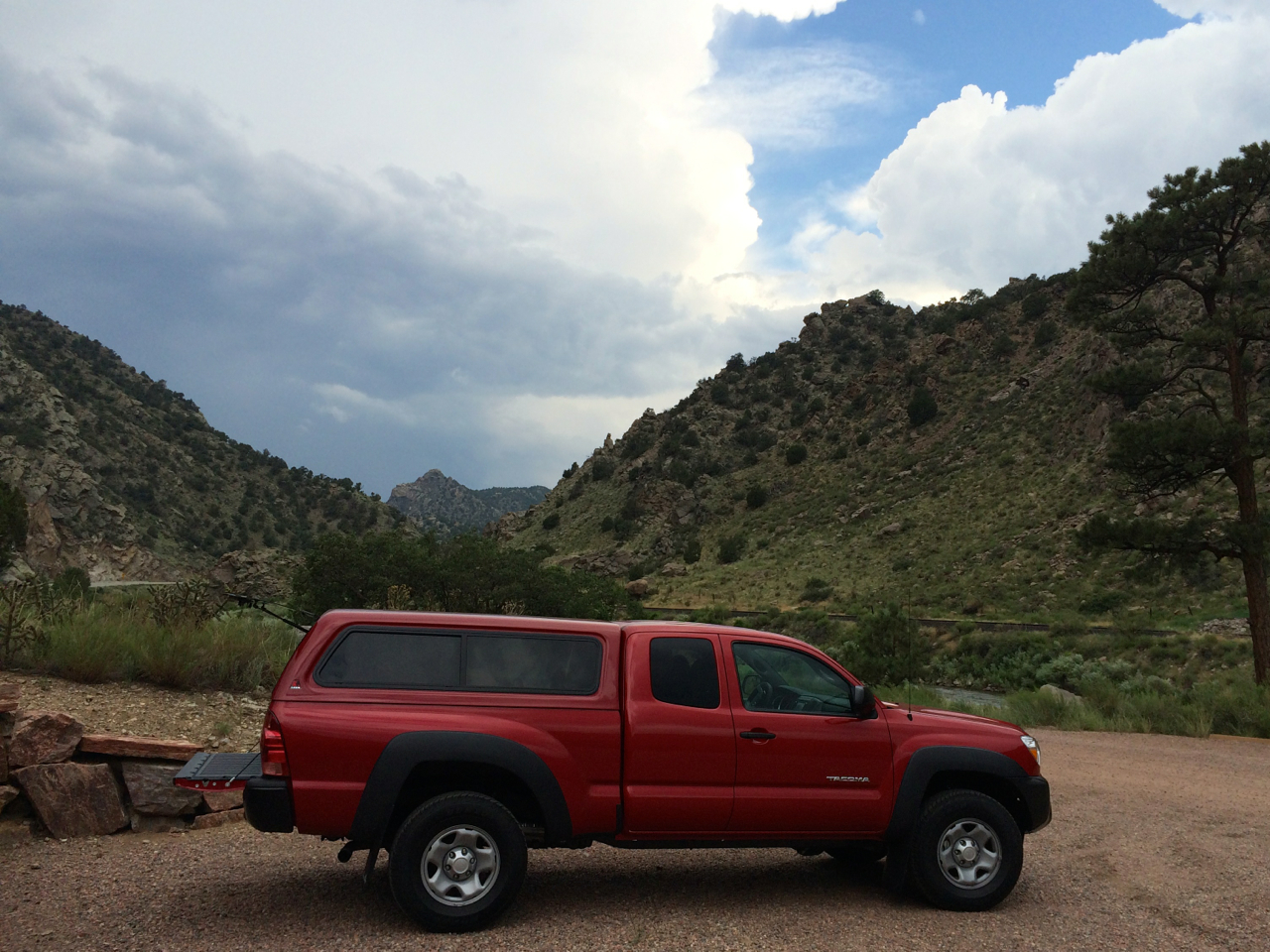 Red in Big Horn Sheep Canyon on the Arkansas River

Pretty soon I was singing along with Lyle Lovett’s “Truck Song.” And I had a name for my new truck: Red. Because she is. Very.

I smiled all the way home. I honestly had forgotten how much I love driving a pickup.

Saturday, Red and I drove to Colorado Springs to get the topper, and then on to Denver for meetings. Now Red is ready for our first camping trip. I know just where I’ll go too.

If you see a bright red truck with a matching topper headed for the hills and the driver is smiling, it’s probably me. 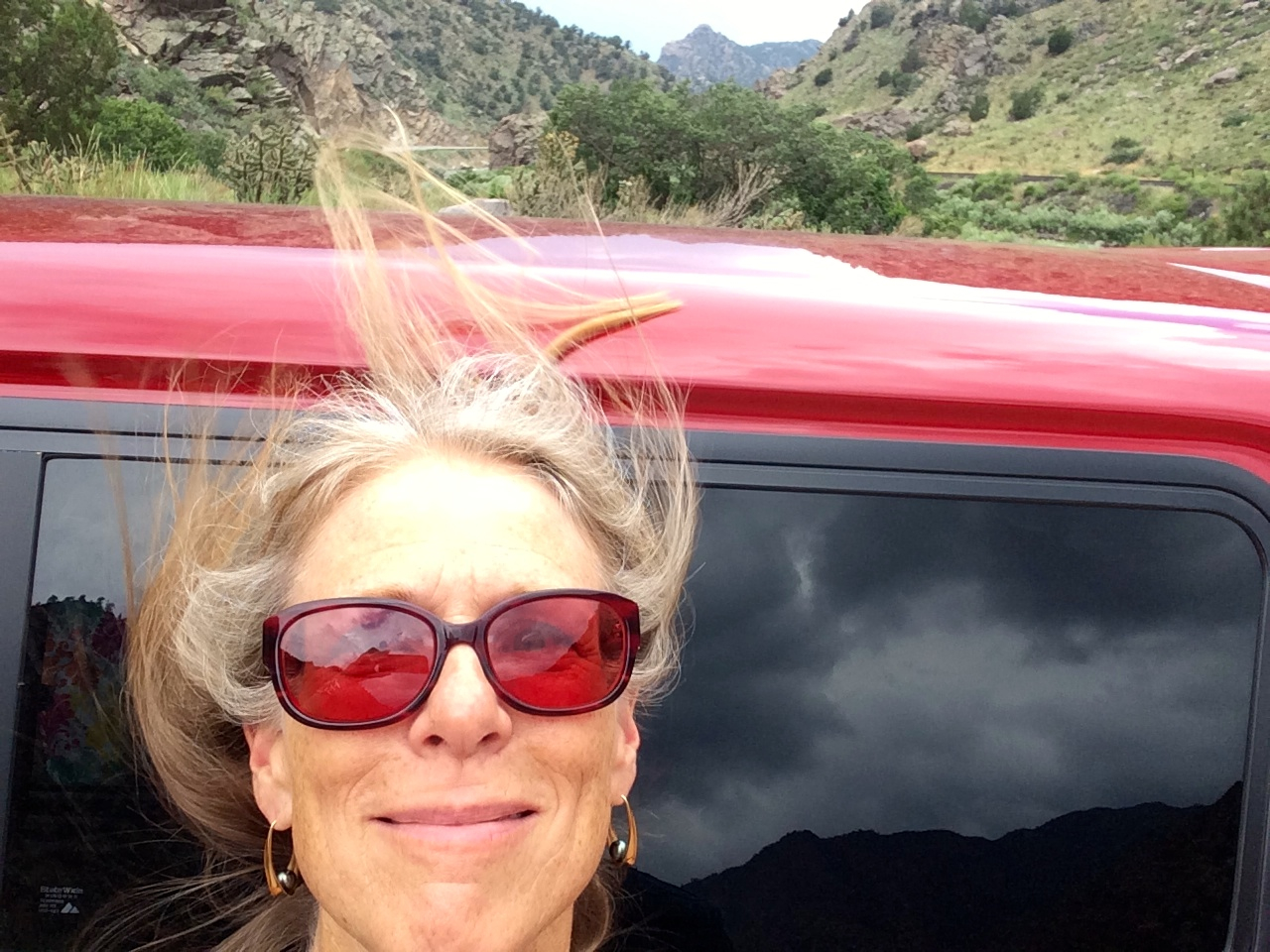