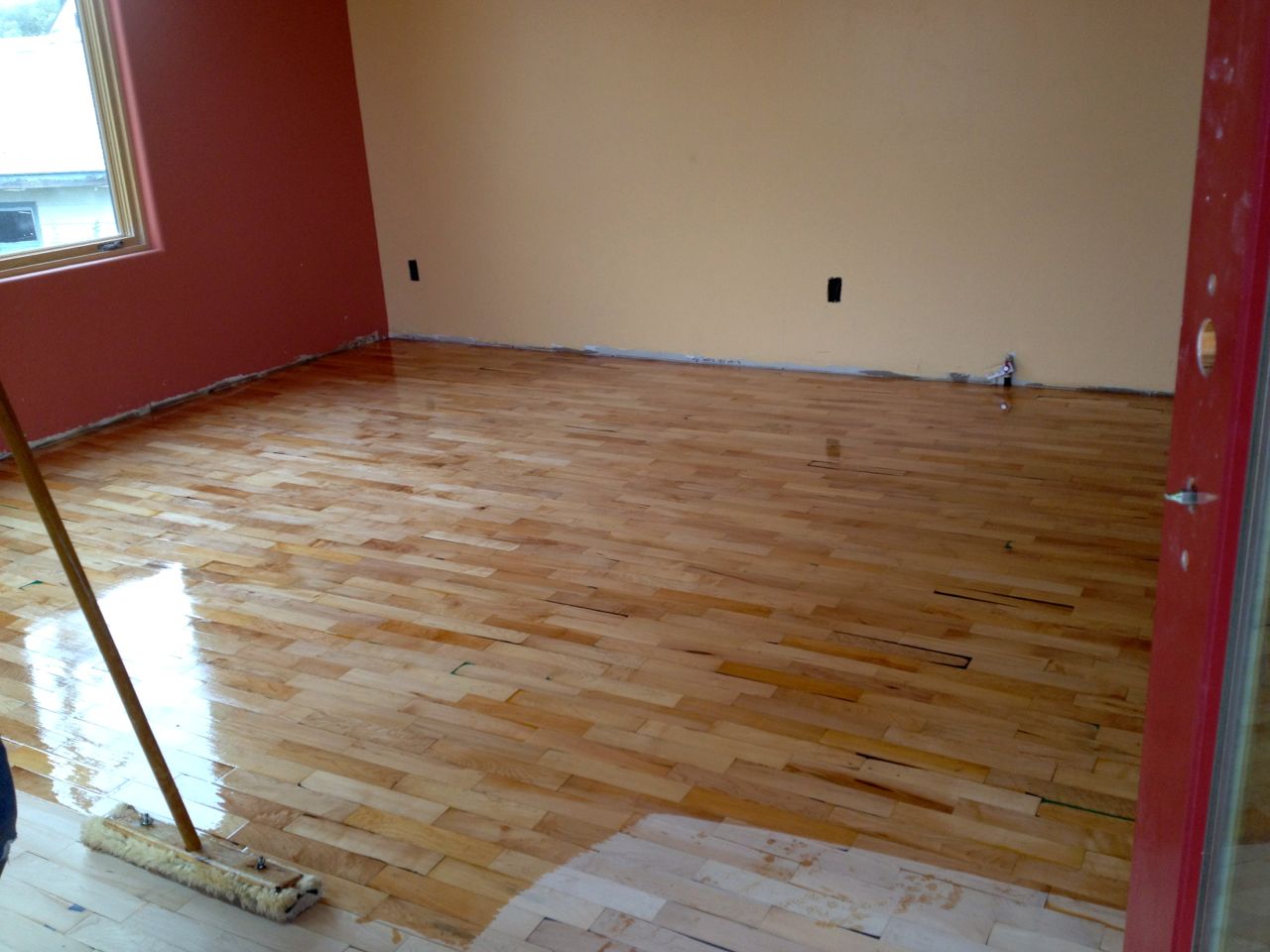 Late this afternoon when I stepped out on the loading dock of Richard’s shop, my flooring guys, James Mayfield and his brother, called me over to the new studio above the garage.

“We’re putting on the first coat of sealer. Take a look.”

I climbed the extension ladder, still the only access. (The exterior stairs will go in after it quits raining and my excavator can get his backhoe back on site for some serious grading.)

I looked through the door. “Oh yeah!” James stopped swabbing long enough for me to shoot a photo.

“It’s gorgeous. I love the way you let hints of the original markings remain. They tell a story.” 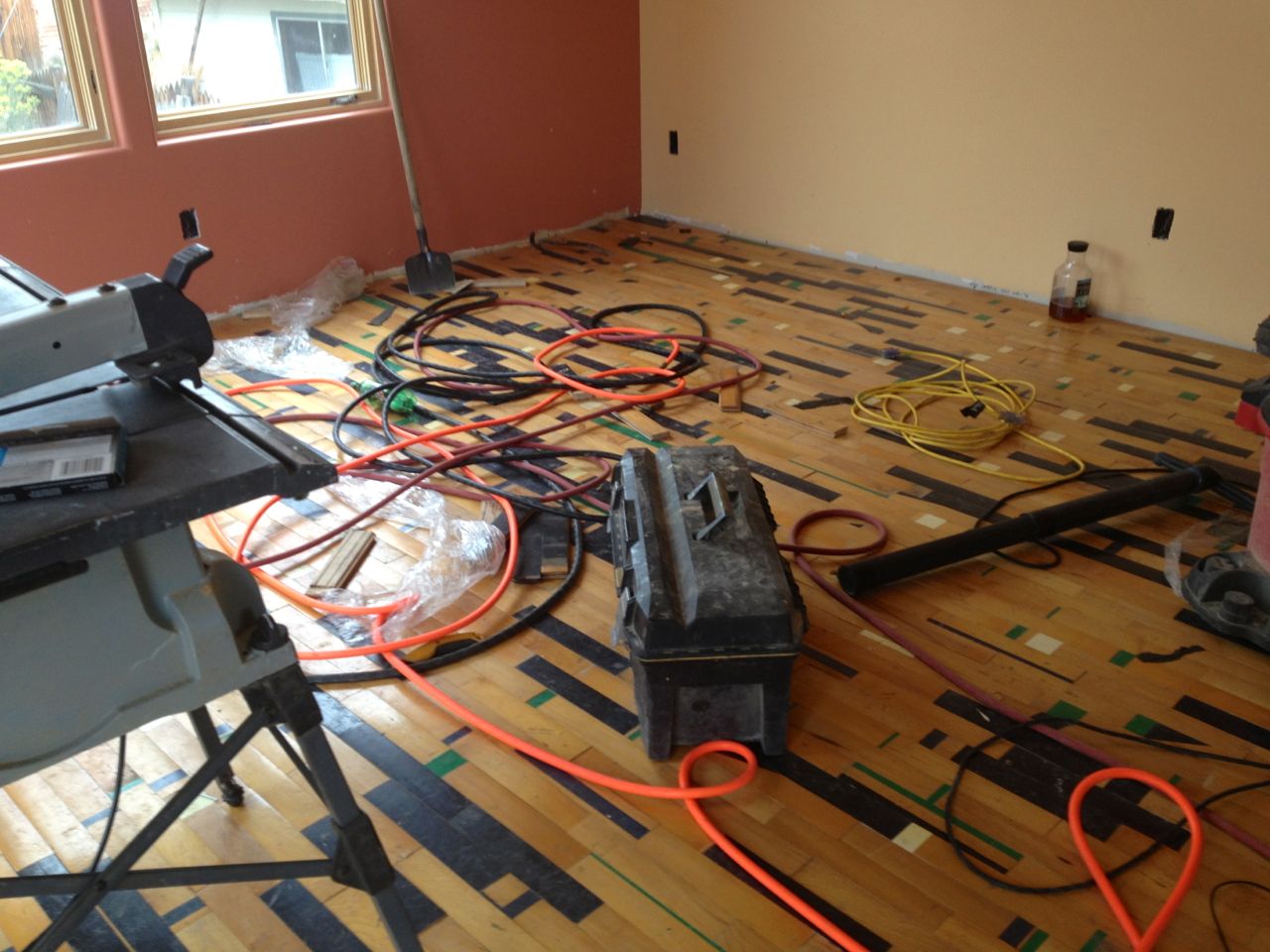 The maple floor boards before sanding, with random markings from its past as a gym floor.

James nodded. He’s very southern-culture courteous, but I could tell the day before when I asked him to sand only enough to level the surface, and not to remove all of the paint from what had once been a school gymnasium floor, he was dubious. But willing to humor his client.

“I wasn’t sure how it would look,” he said today. “I’ve never done a floor that we didn’t sand until it was ‘perfect.’ But this turned out good.”

“I want people to know it had another life before this one,” I said, “so they think about reusing materials like wood.”

We stood companionably, admiring the floor. Then I thanked James, climbed down the ladder and opened the garage door. 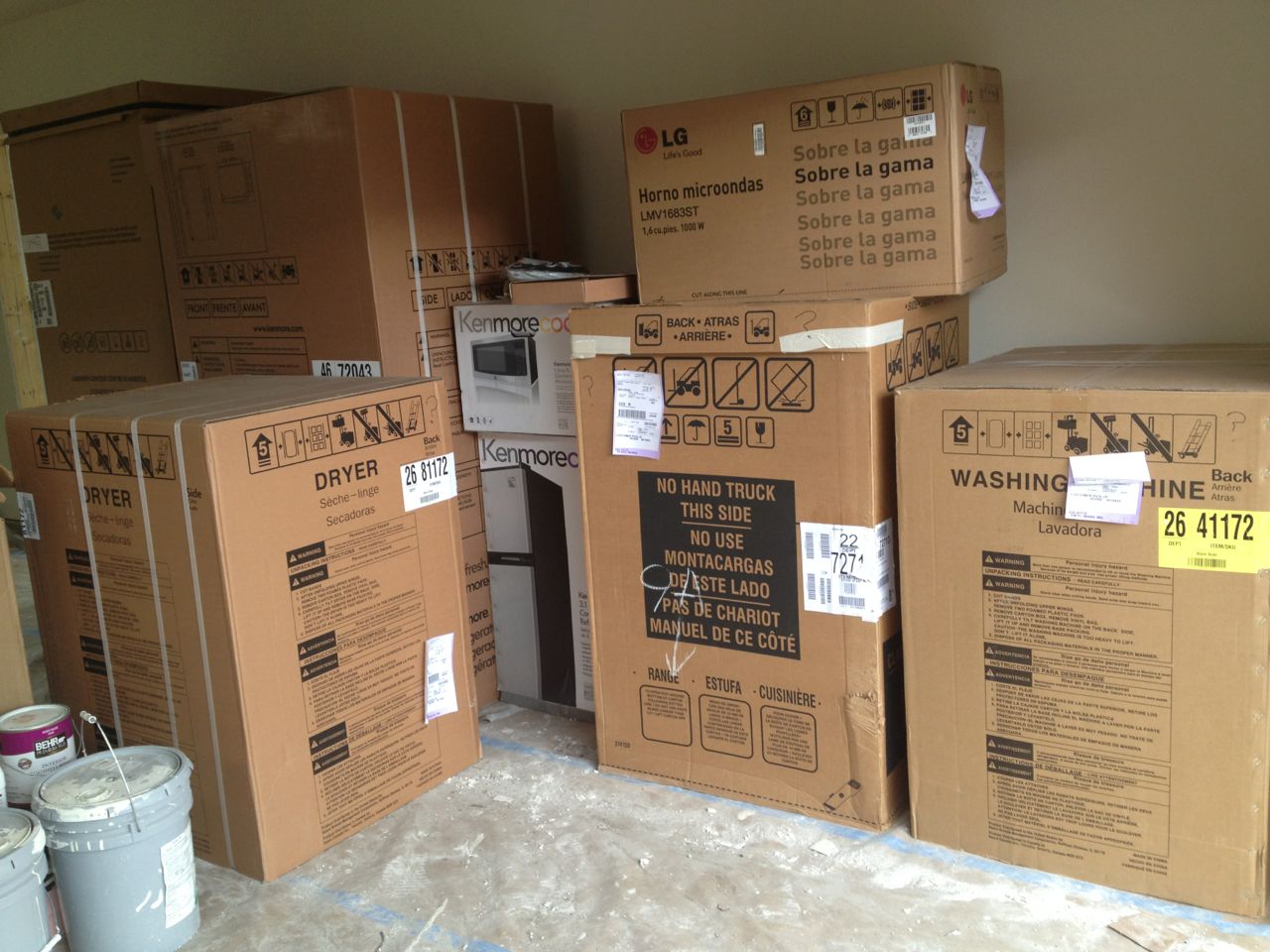 A small truckload of appliance boxes ready to be distributed.

And smiled again, this time at the sight of boxes  of appliances.

Another sign of progress, even though they’re still waiting to be moved to their eventual destinations in Creek House (my new home) and Treehouse (the garage/studio).

I checked each one on my mental list and then walked across what will be the courtyard between the two buildings.

I started to go around to the back door of Creek House, and then remembered that those floors had just gotten their second coat of sealer. I peered in the living room window instead. 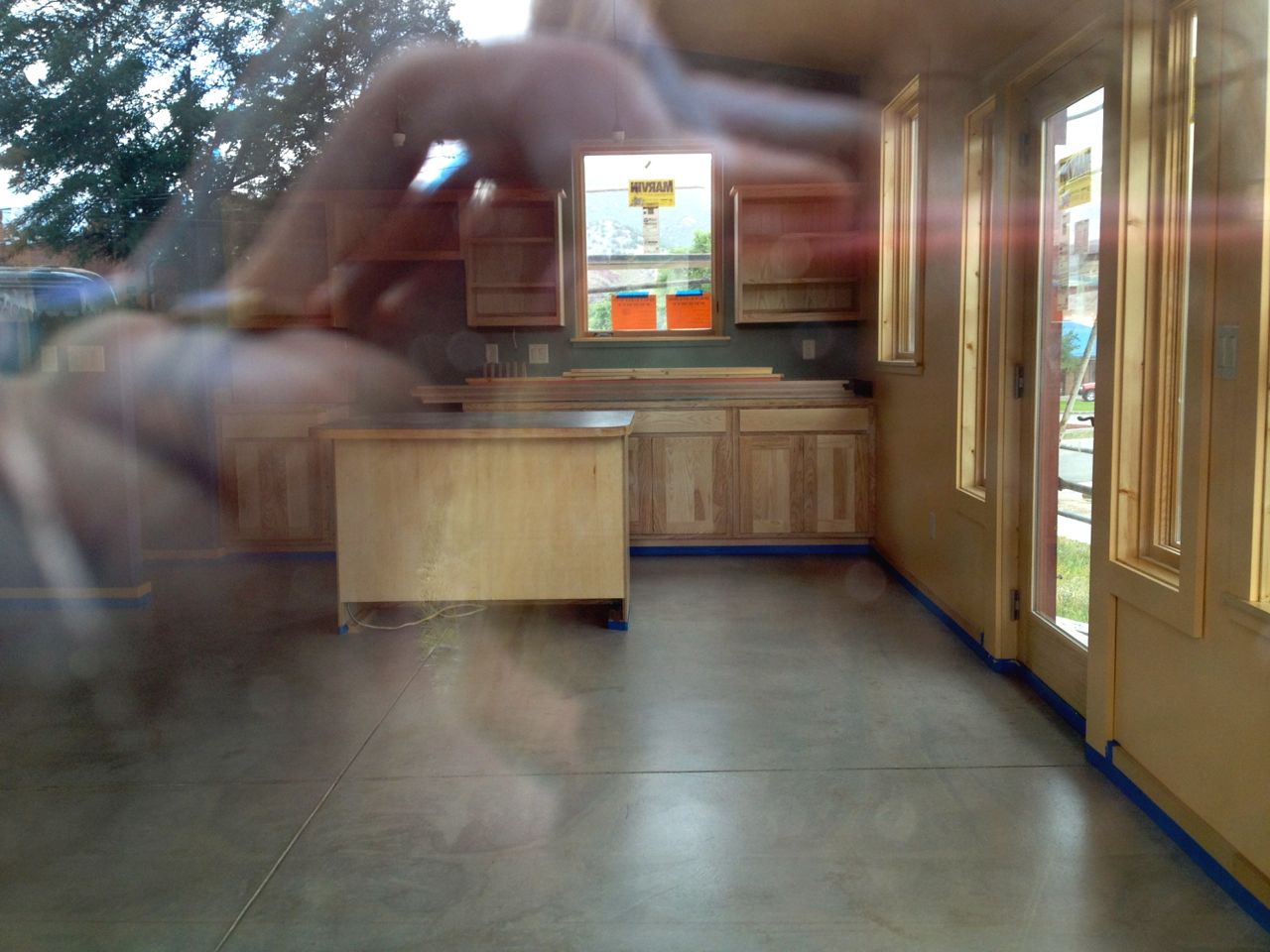 And smiled yet again. Even through the dirt-splattered pane, the floor looked great.

The house floor–the thermal mass that will keep the house warm in winter and cool in summer–is simple concrete. The guys at A-1 Concrete carefully troweled it smooth; Verlin and crew of Natural Habitats sealed it with non-VOC-emitting Behr Concrete Sealer.

The subtle patterning is what happens as concrete is mixed, plus the soft marbling from the tarps laid over it as it cures–and a few random construction drips and splotches. It too, tells a story.

Later, as I was pulling and bagging the late-summer growth of invasive tumbleweed and kochia along the City Trail across the creek, in the process revealing clumps of wildflowers colonizing the edges of the trail, the sun slipped through a gap in the clouds. 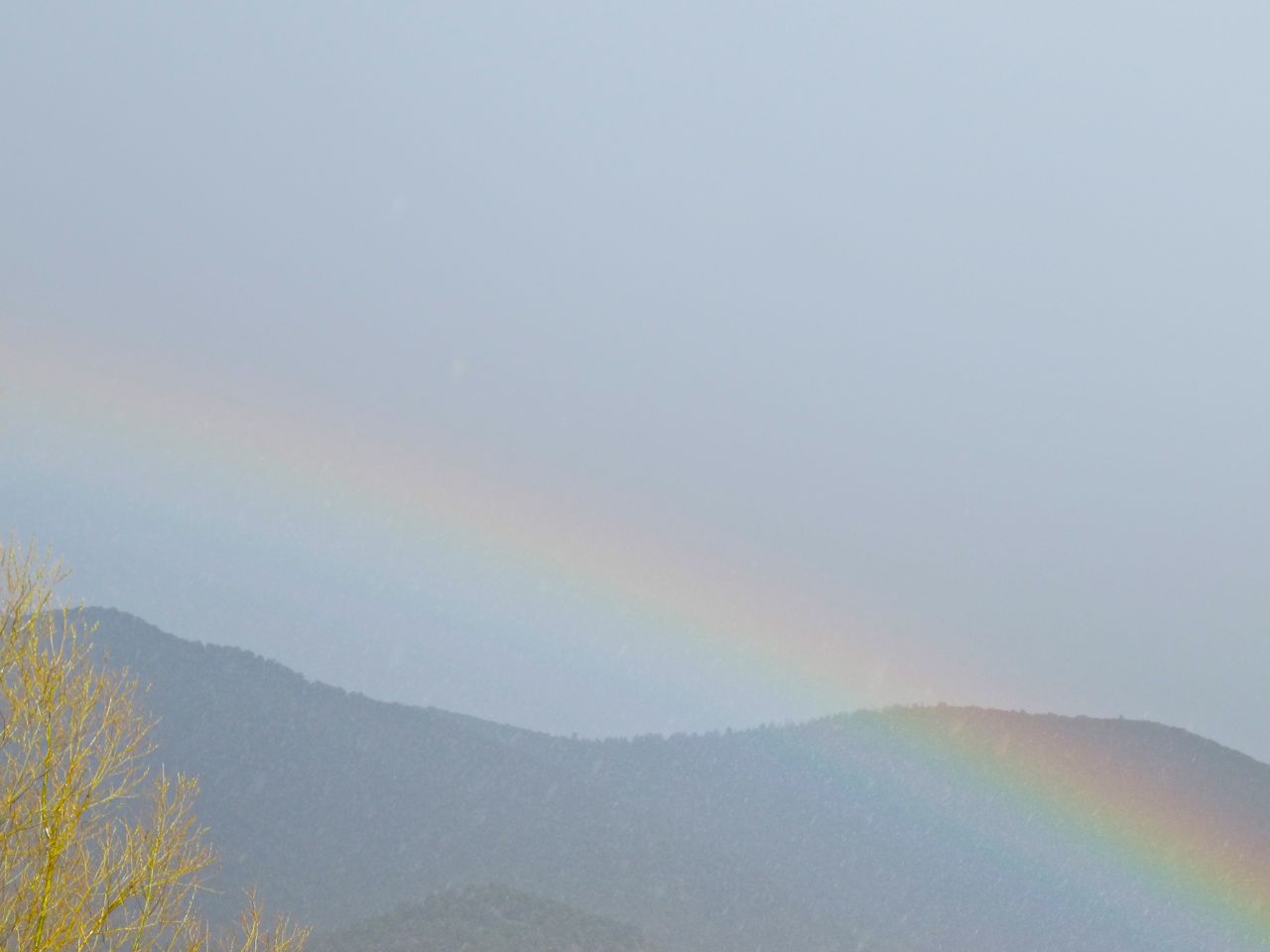 A rainbow arches over Salida and Creek House.

I looked up and spotted a rainbow. I straightened my stiff back, trotted across the temporary bridge over Ditch Creek, and climbed the ladder to the Treehouse deck.

As I shot a photo, a woman walked by on the trail, her back to the rainbow. On impulse, I cupped my hands and shouted, “Rainbow!” and pointed.

She popped the earbuds out of her ears, turned, and grinned, her smile at least as big as the one on my face.

“Thank you!” she called. “I would have missed it.”

“You’re welcome. It was too good to keep to myself.”

She waved, replaced the earbuds and headed on up the path. I climbed down the ladder, finished weeding, and lugged two heavy black plastic trash bags to the city can at the other end of the block.

The rain started again as I walked home, still smiling.

Tonight, a stalled monsoon front continues to deluge Colorado’s Front Range (east of my mountain valley), causing hundred-year floods, and washing away highways, houses and cars. My heart goes out to all affected by this wild weather, especially ironic after years of withering drought. Stay safe!

peony leaves
cup night's gift of snow
like a prayer
#haiku #garden #springsnow #joy #colorado
Waking to wet snow on April may not sound like a gift, but in this region-wide drought, any moisture is welcome.