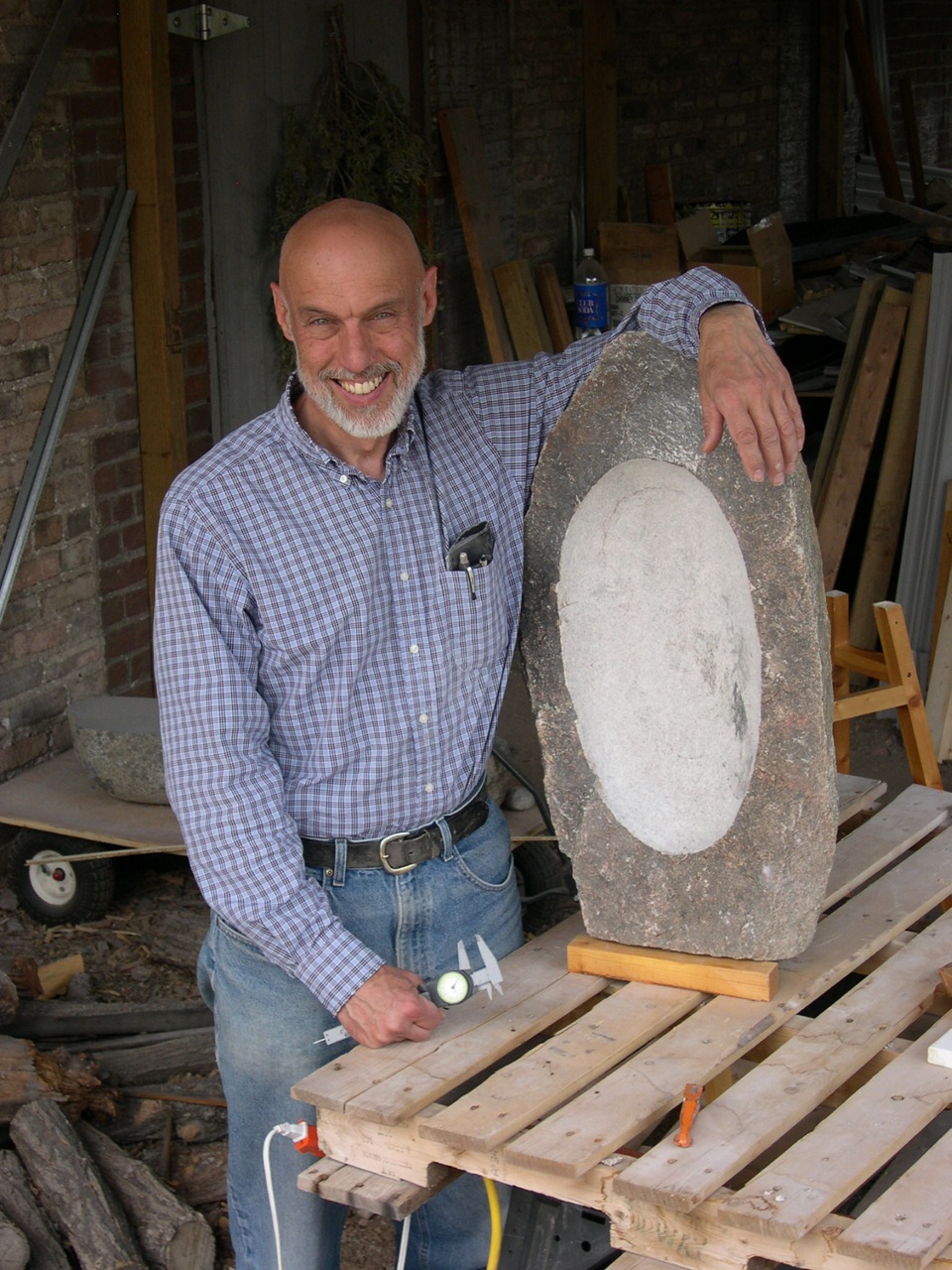 Friday morning, I headed over the mountains in Red on an errand that was a long time in coming: driving Richard home.

Back in 2011, when it became clear that he was in the final stages of life with brain cancer, Richard decided to donate his body to the CU Medical School.

“I’d like to teach one last time,” he said as we snuggled in bed one morning. “Do you mind?” 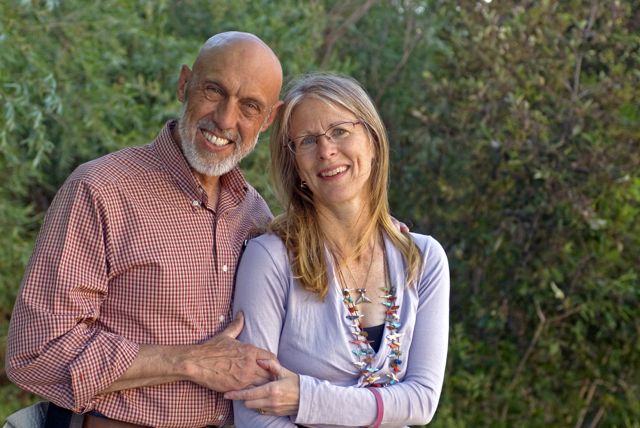 Richard and Susan in summer of 2010. Photo courtesy Jim Steinberg

On November 28, 2011, the day after Richard died, his body was “transported” to Denver to the Medical School’s Anatomy Lab.

The administrator there told me he had been placed in the “long program,” so it could be two or three years before I would get his cremated remains back. That seemed appropriate since Richard didn’t rush about anything. Ever.

Two years ticked toward three. I began to wonder. I called in September. Nothing. Last Wednesday, I called again. The nice administrator said he had “completed the program” and was ready for me to pick up.

She offered to mail him. But I realized I needed the ritual of driving him home. 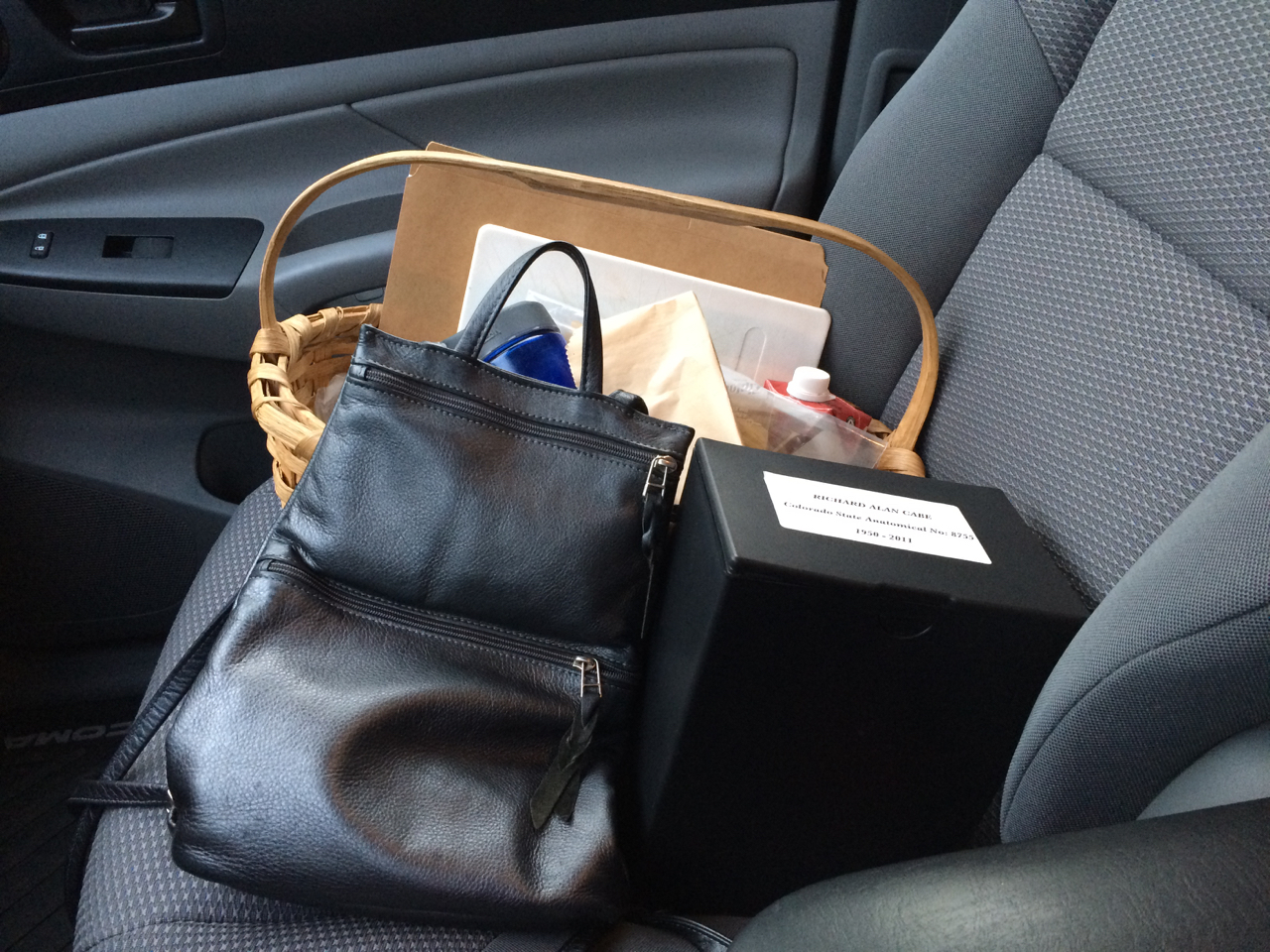 Richard (box on the right) in the passenger seat of Red.

Friday afternoon, three years and fourteen days after his death, I chatted with the administrator, signed the papers and then hefted the box containing the ten pounds of Richard’s cremated remains.

On impulse, I mentioned that I planned to take photos on the drive, as a way to document his journey home.

“There’s a new memorial garden right outside the building,” the administrator said. “You could take one there.” 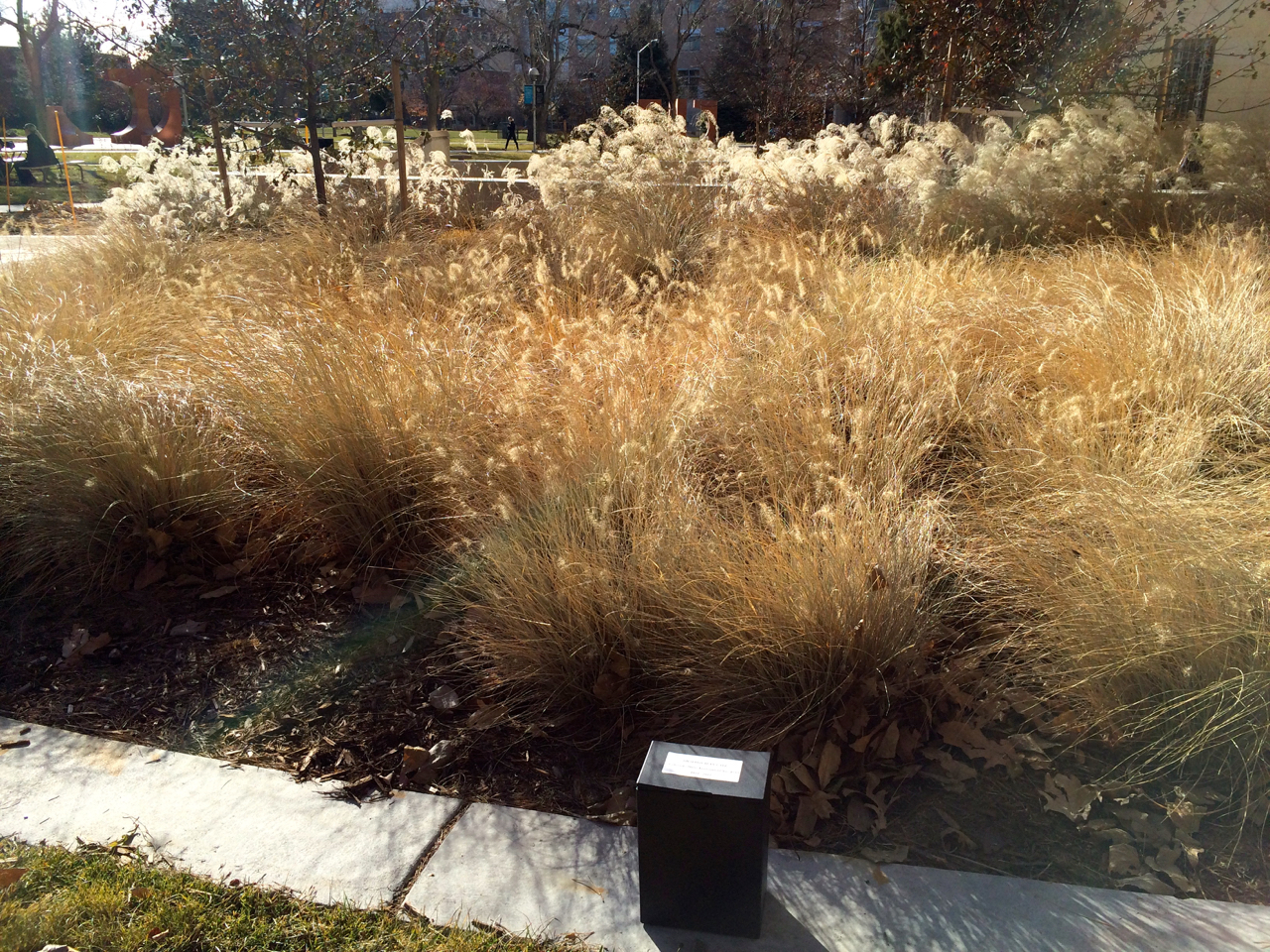 Richard in the memorial garden.

As I posed the box, I realized that in far background was “Corpus Callosum,” his favorite of the outdoor sculptures on that campus where we lived in the winter of ’09/’10 during his radiation treatment. 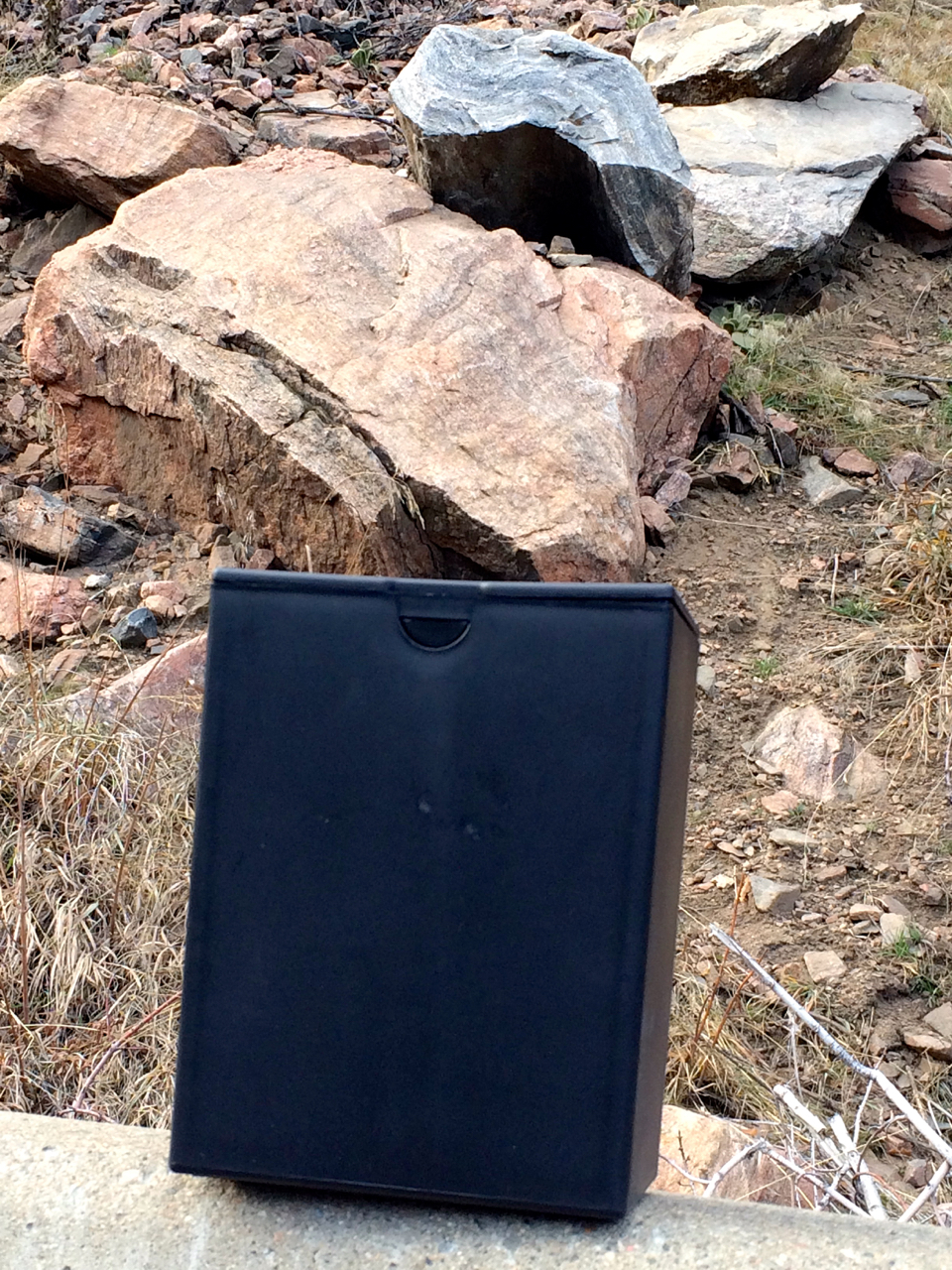 Richard on the concrete barrier below the wave rock.

The next stop was the “wave” rock, a boulder along US 285 in Turkey Creek Canyon. Richard really wanted to use that rock in a sculpture. But he never figured out how to discretely retrieve the ton or so of boulder from beside a busy highway. 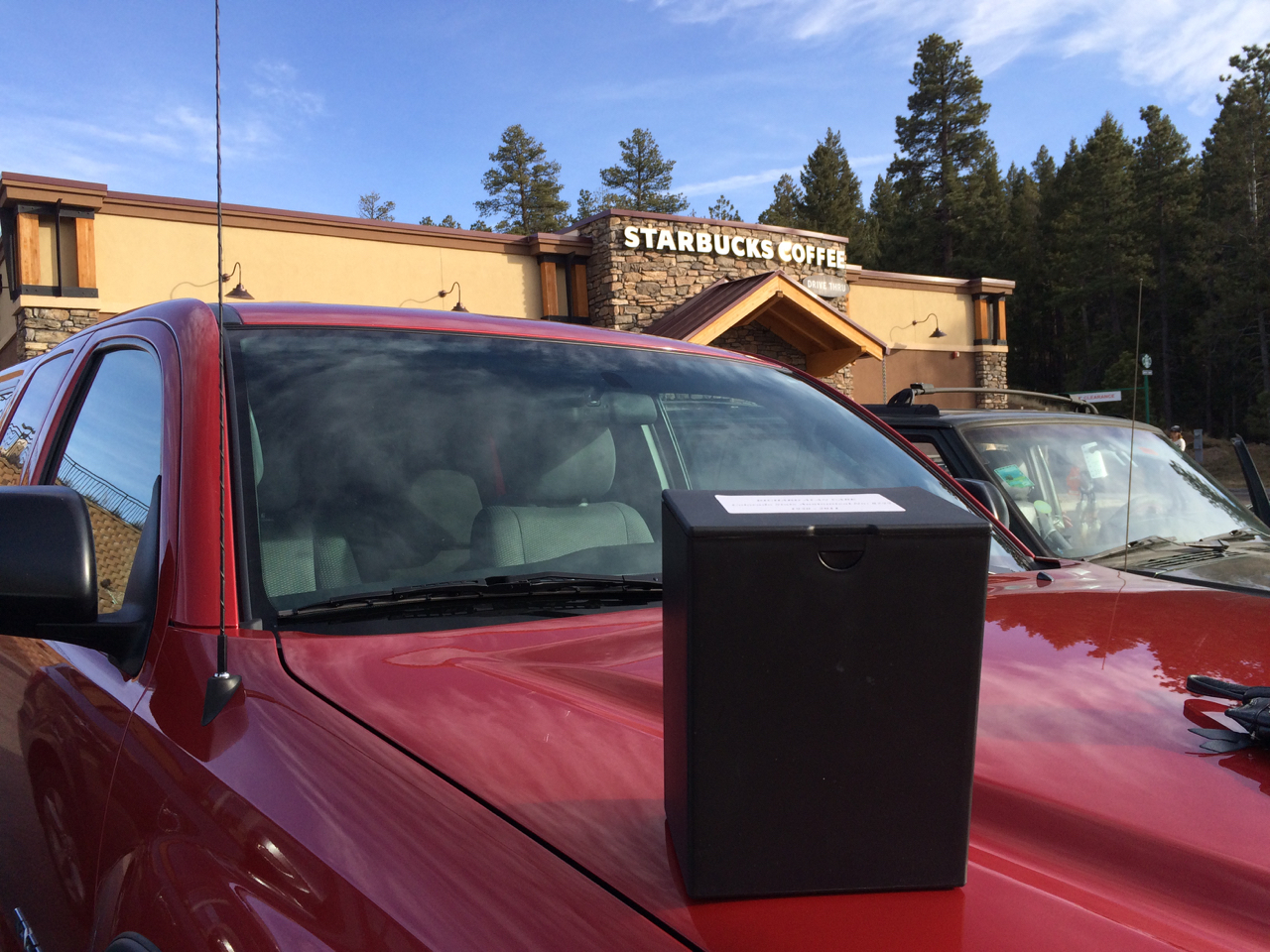 Perched on Red (no, I did not pour coffee into the box!)

After that, it was the Starbucks in Conifer, his coffee-for-the-drive stop. 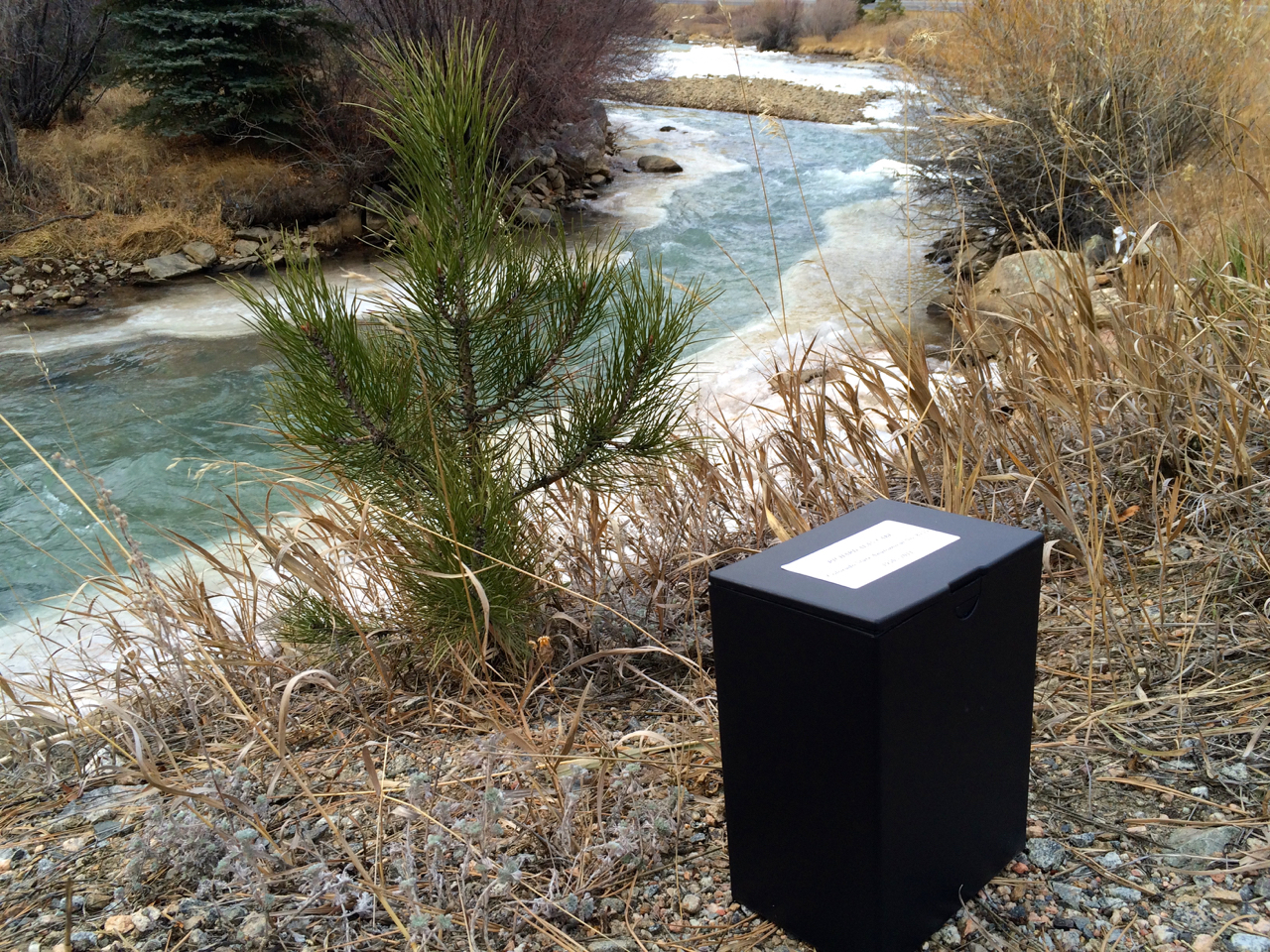 Yes, that’s ice along the edges of the North Fork.

And then a quiet stretch of the North Fork of the South Platte. 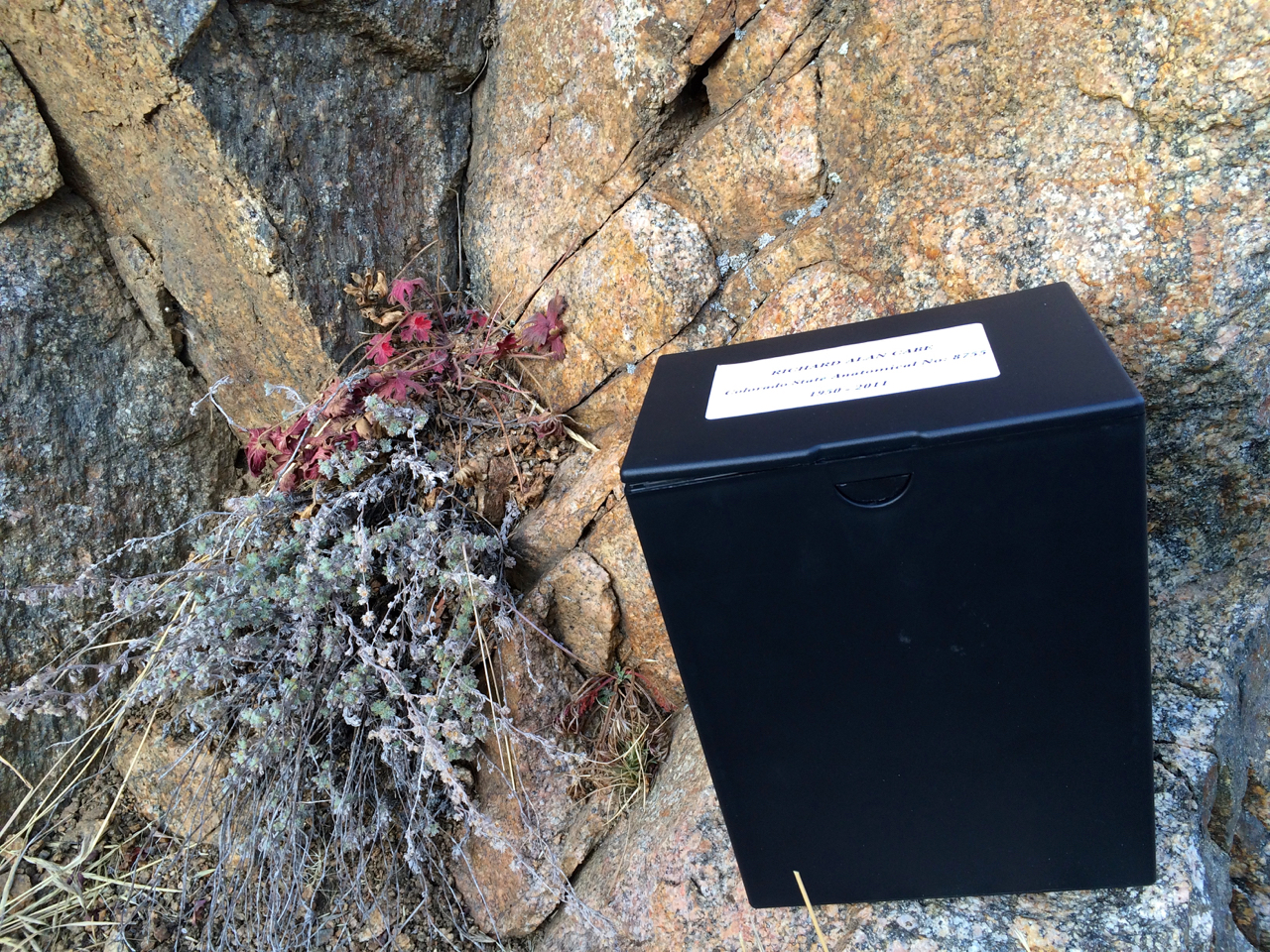 It’s not easy to balance a 10-pound box of remains on a cliff….

The cliff going up Kenosha Pass where he found the boulder that became the sink in the guest cottage at Terraphilia, the big house. 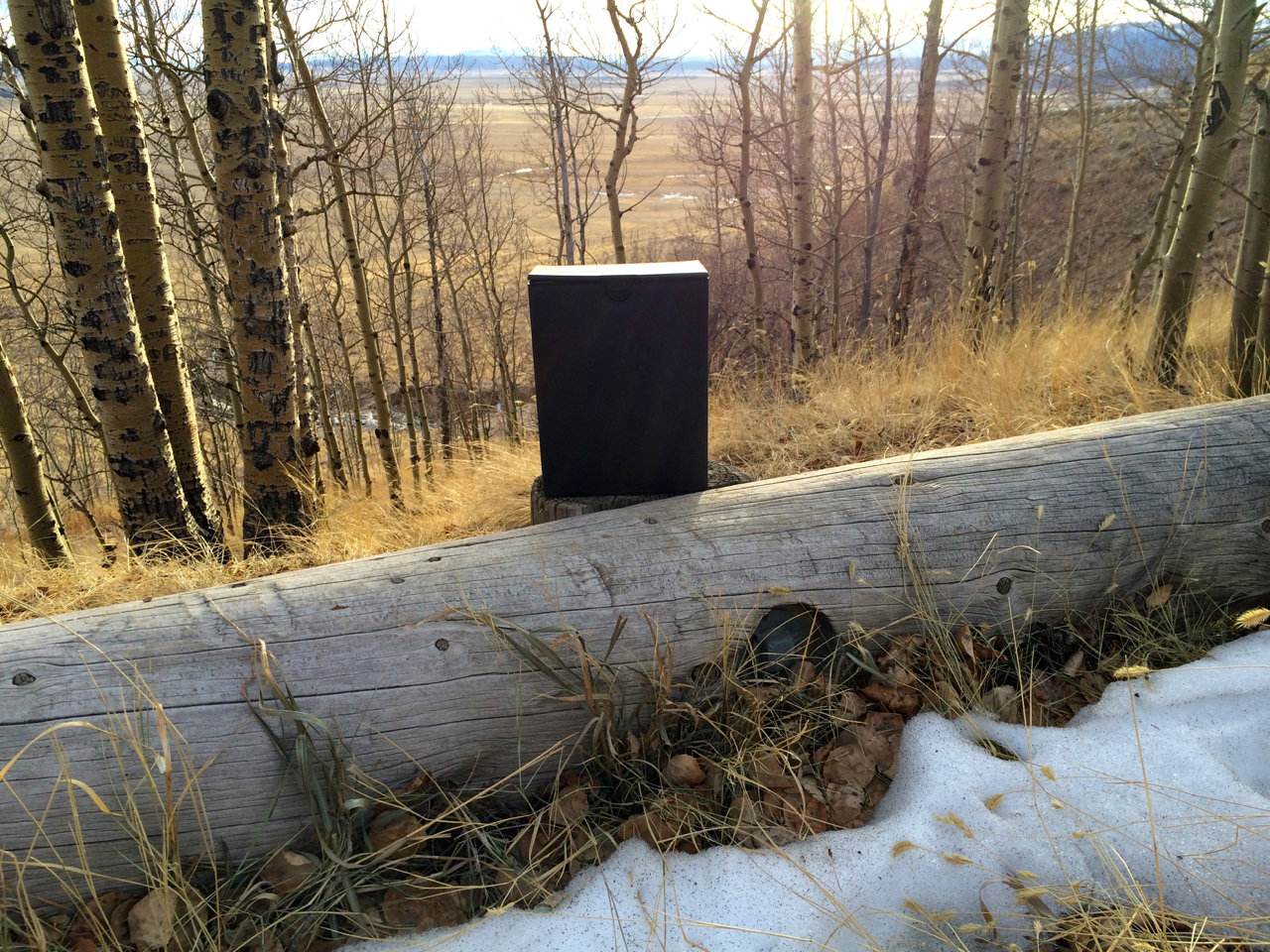 “Let’s go there,” Richard would say, pointing at “our mountains” in the distance.

And the viewpoint atop Kenosha Pass (10,000 feet elevation), where he loved to look over South Park, toward the distant mountains above Salida. 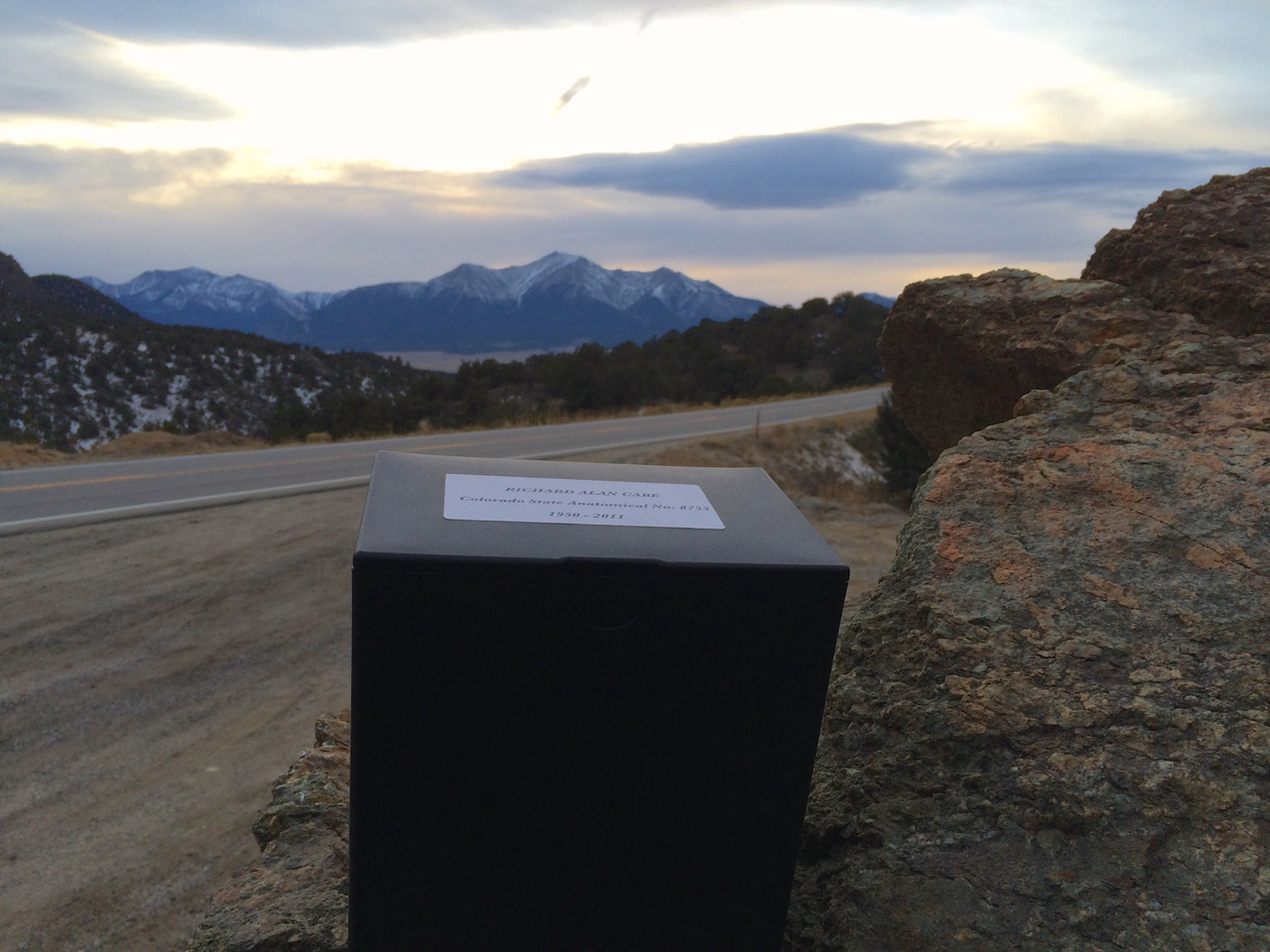 The Sawatch Range in the distance after sunset

Another favorite rock outcrop, coming down Trout Creek Pass into our home valley.

It was almost dark by the time we got home to the little house he never knew, the one I helped design and build after his death, when I realized I couldn’t keep up half a block of property, our 2,400-square-foot house, and his 1,600 square feet of hundred-year-old studio.

I lifted Richard up on the flagstone shelf in the living room, the one that echoes the “cliff” he built for me at the big house.

Yesterday I walked to Gallery 150, the gallery that showed his work in Salida, and with goldsmith/gallery owner Jerry Scavezze’s help (and consultation from goldsmith Toni Tischer and fiber-artist Jane Carpenter–thanks all!) selected a porcelain urn with a lid by a potter whose work Richard had admired. 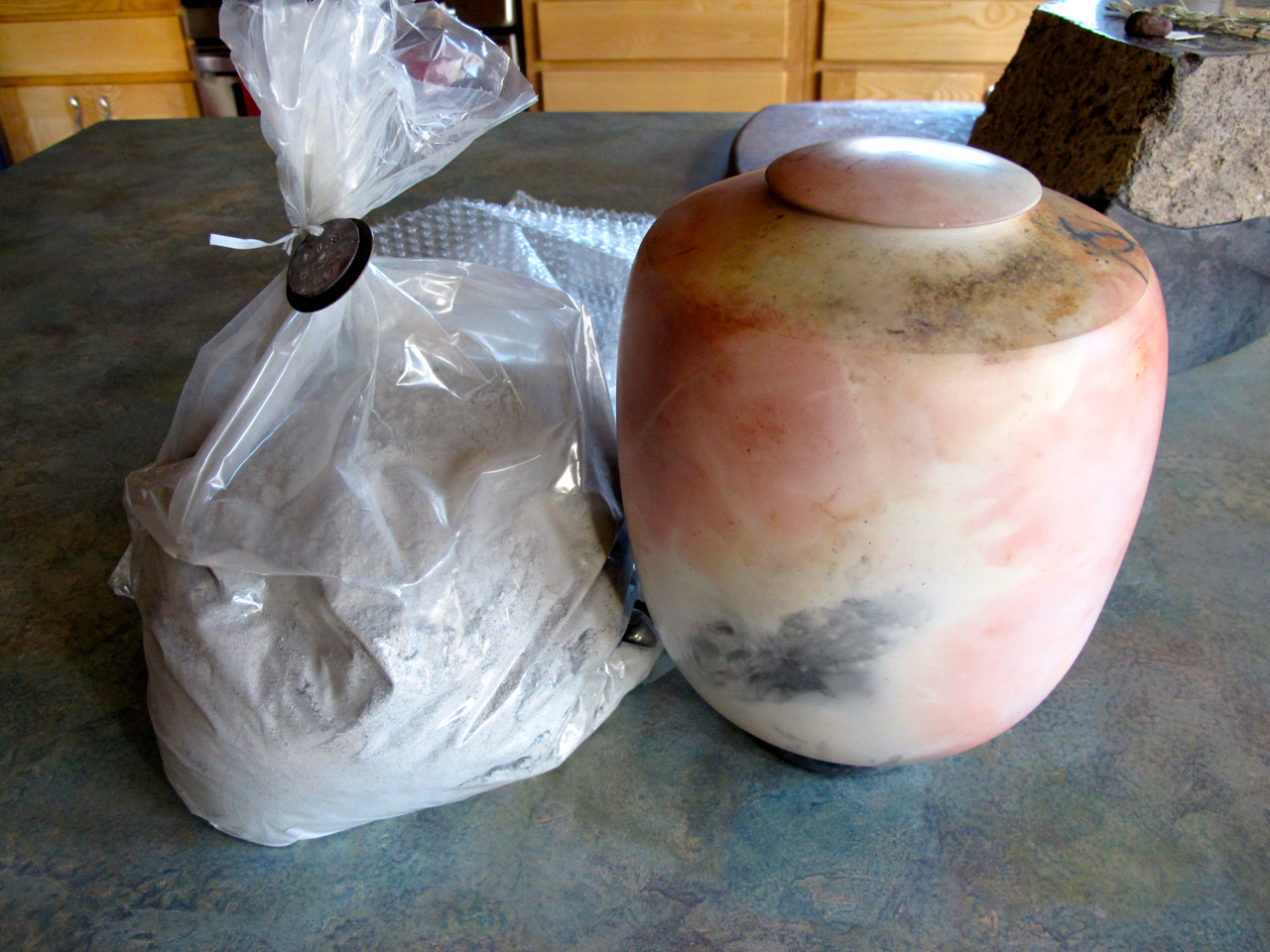 Richard and the urn

I brought it home, poured Richard’s remains into it (which is not as easy as you’d think). They fit, exactly. 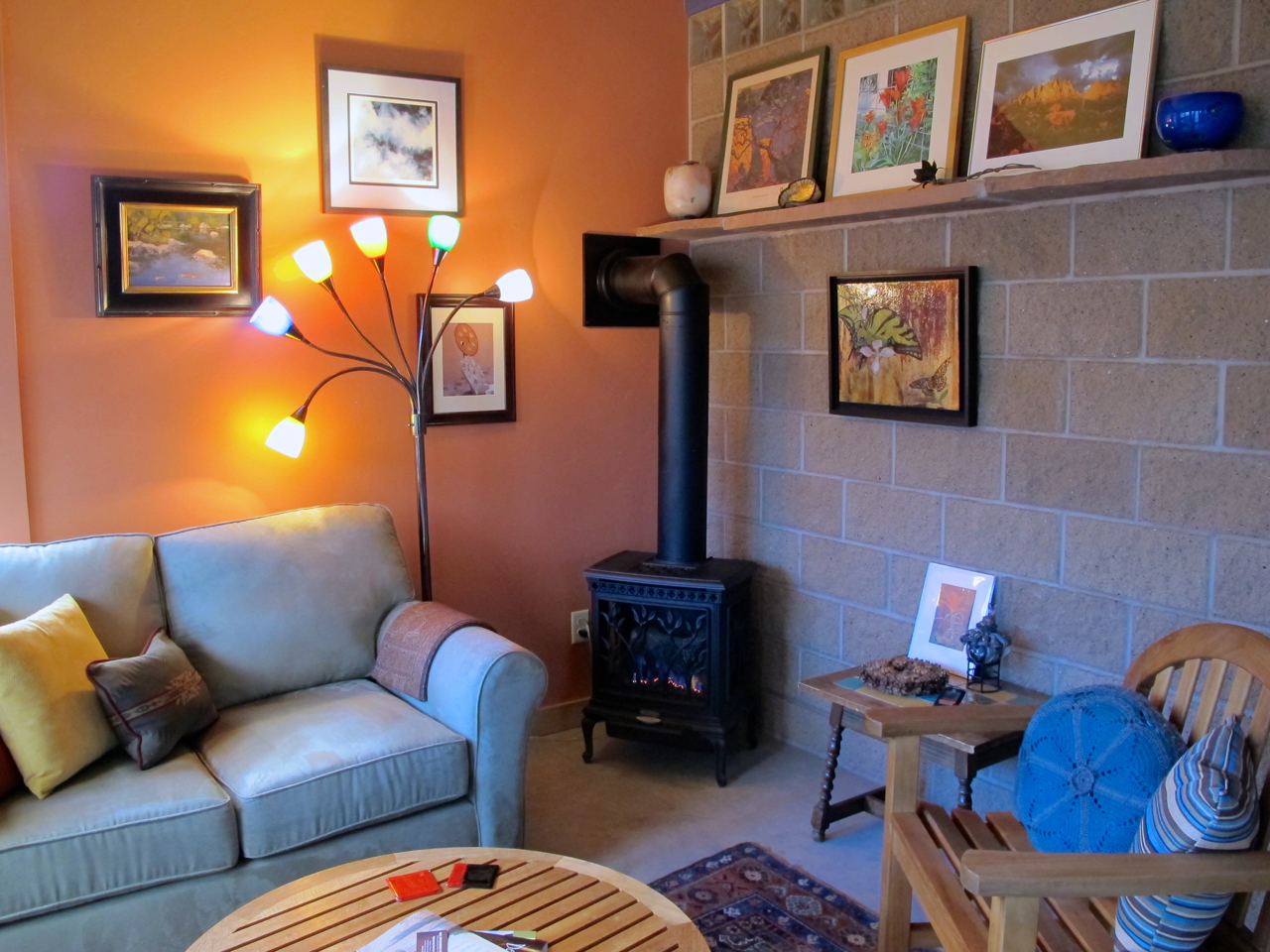 Richard, home at last (above the stove)

This afternoon was Kent Haruf’s memorial service. The program included this poem from Rumi, a favorite of he and his wife, Cathy:

The minute I heard my first love story
I started looking for you, not knowing
how blind that was.

Lovers don’t finally meet somewhere.
They’re in each other all along.

Richard and now, Kent. In my heart still.