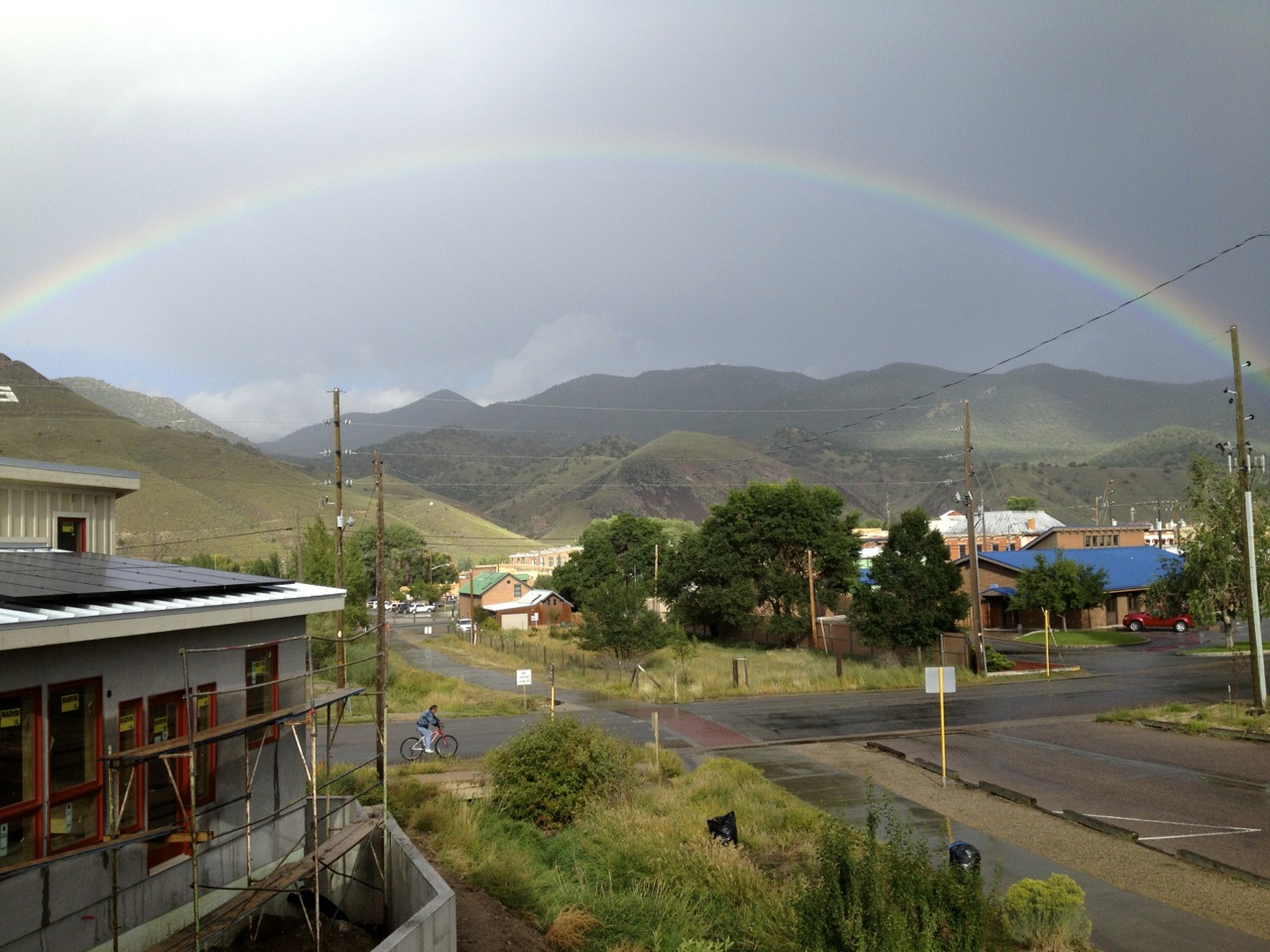 A rainbow stretches over Salida and the Arkansas Hills at sunset after a late-summer shower.

Here in the high-desert country of the Southern Rockies, we’ve gone from drought to deluge. Since July 10th, we’ve received 3.5 inches of rain, more than a third of or “normal” annual total, and more than we got the entire first six months of the year (2.65 inches).

Which is why I’m back to dirtwork, modifying my usually dry stream drainage to handle torrential runoff from my two small roofs so it doesn’t wash out my sloping lot and pour sediment into Ditch Creek. 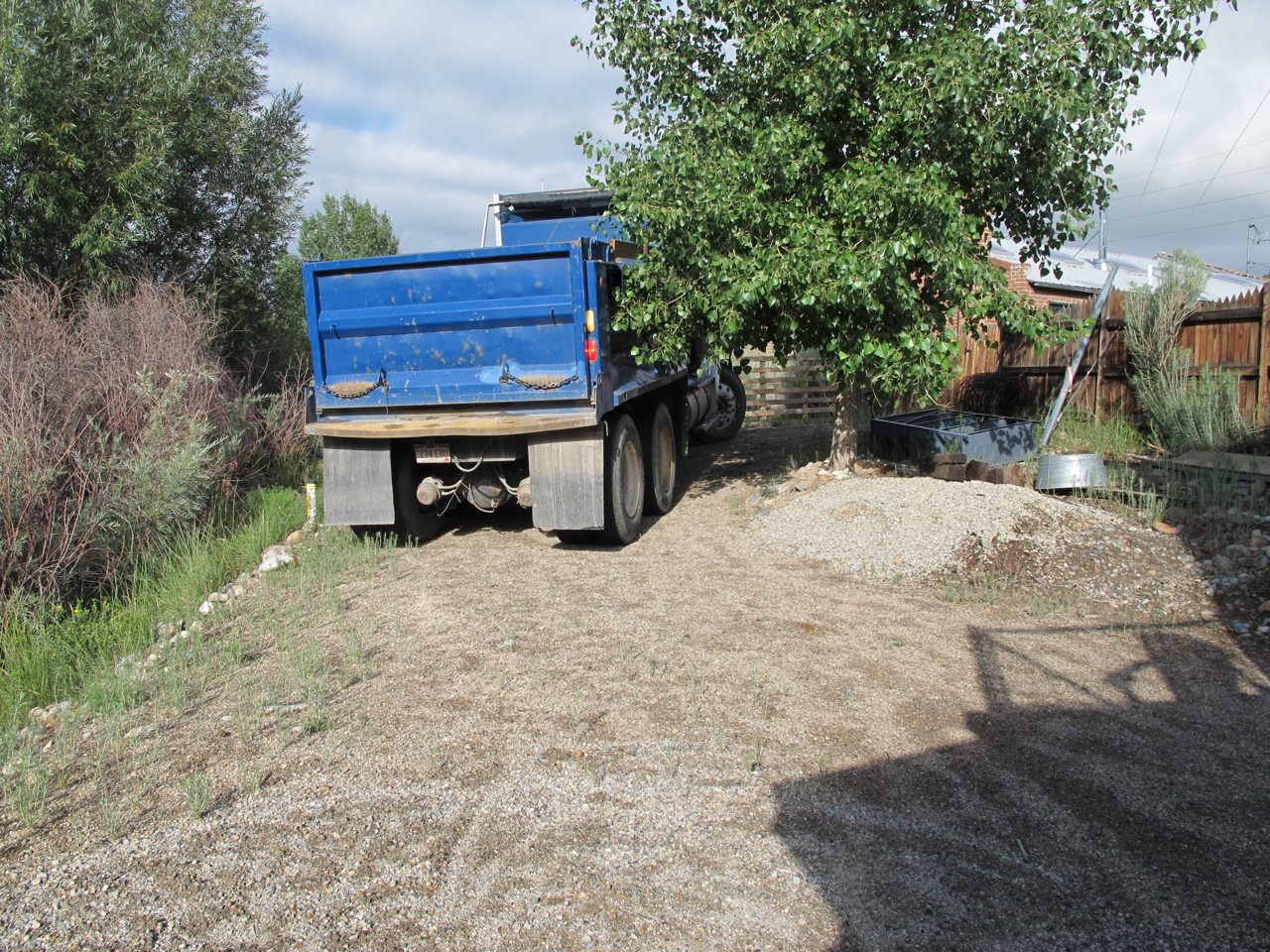 And why on Thursday morning, a big blue dump truck backed down my drive to deliver three tons of mostly granite river rock, navigating carefully around Ruby’s Cottonwood, the tree Richard and I planted as a sapling 16 years ago in memory of his great-aunt Ruby. I figured three tons would last me a while. 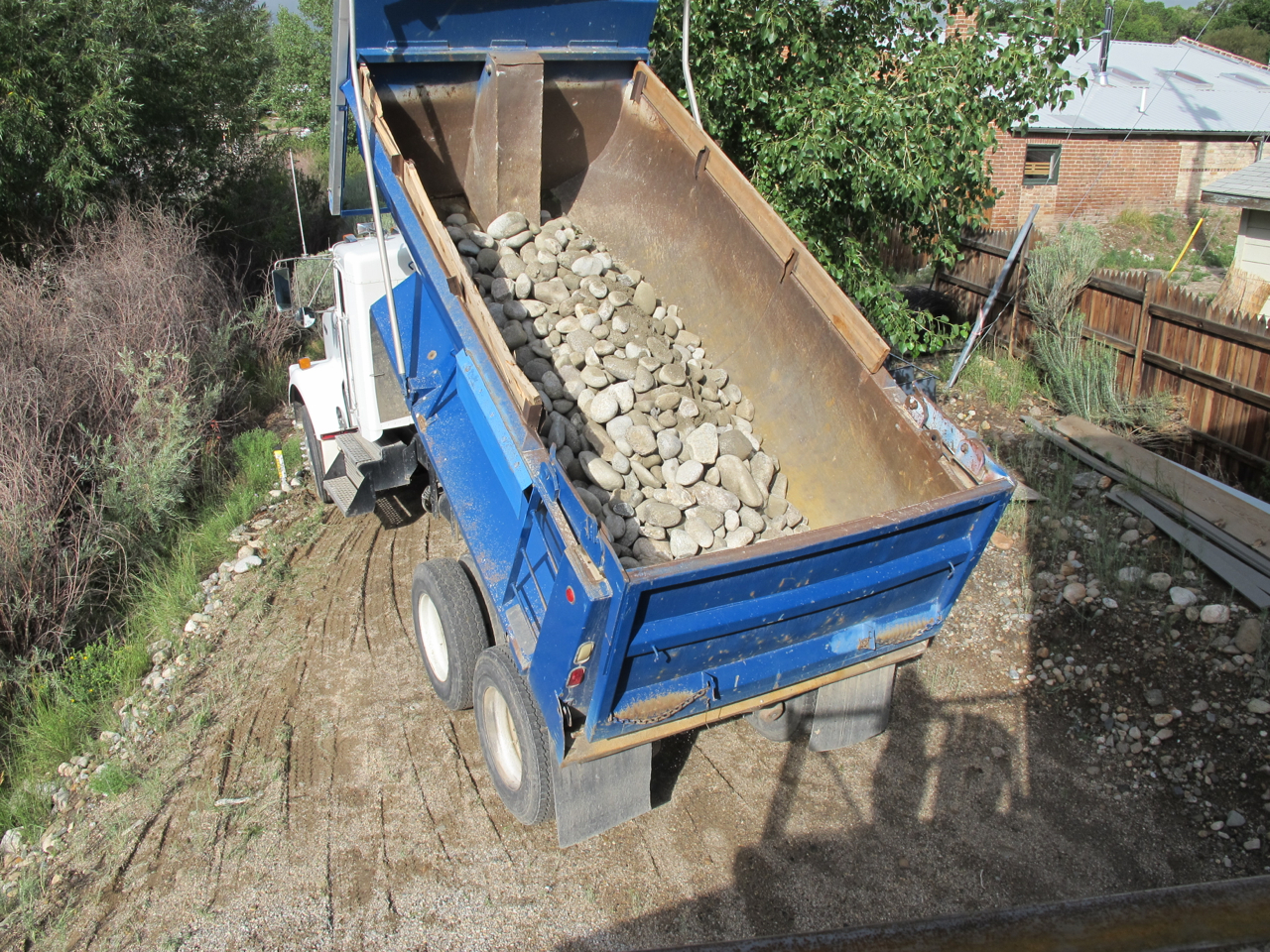 Dumping…. (That’s my shadow on the lower right, shooting the photo from the Treehouse deck.)

At about four o’clock Thursday afternoon after I finished my day’s target of memoir-revision, I went outside to admire the pile, and said to myself, “I’ll just lay a few rocks.” 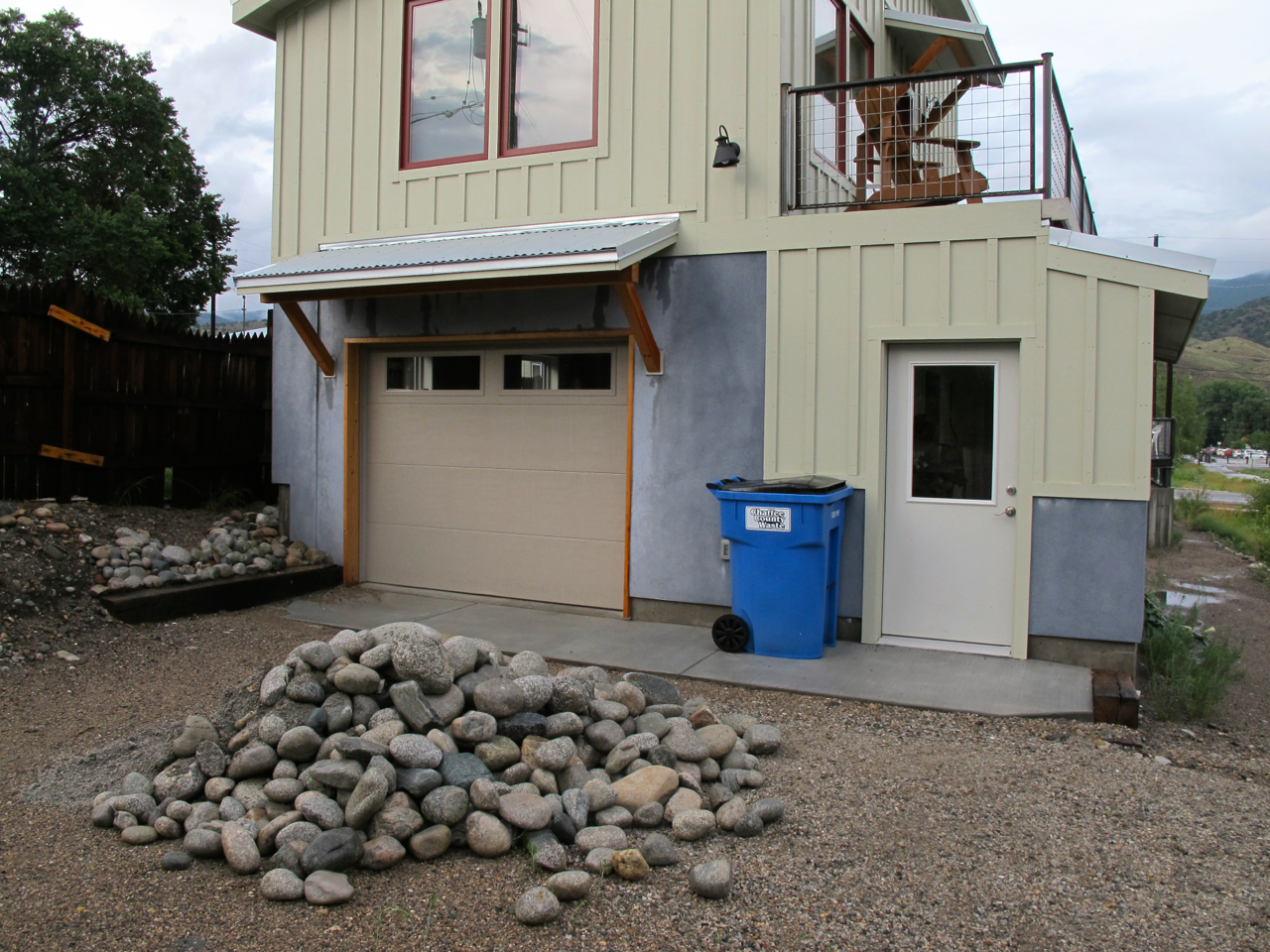 By six-thirty, when the rumbling thunder and spatters of rain drove me indoors, the pile was reduced by a third. I had moved and placed a literal ton of rock. (Did I mention that I love the puzzle of piecing river rock into a “pavement” on the ground?)

My neck and shoulders could feel that ton. But I was glad I had almost finished the first part of the splash zone in the narrow yard behind Treehouse, my garage-studio, because in a few minutes those splashing drops turned into a torrential storm that dropped half-an-inch of rain in just 15 minutes. 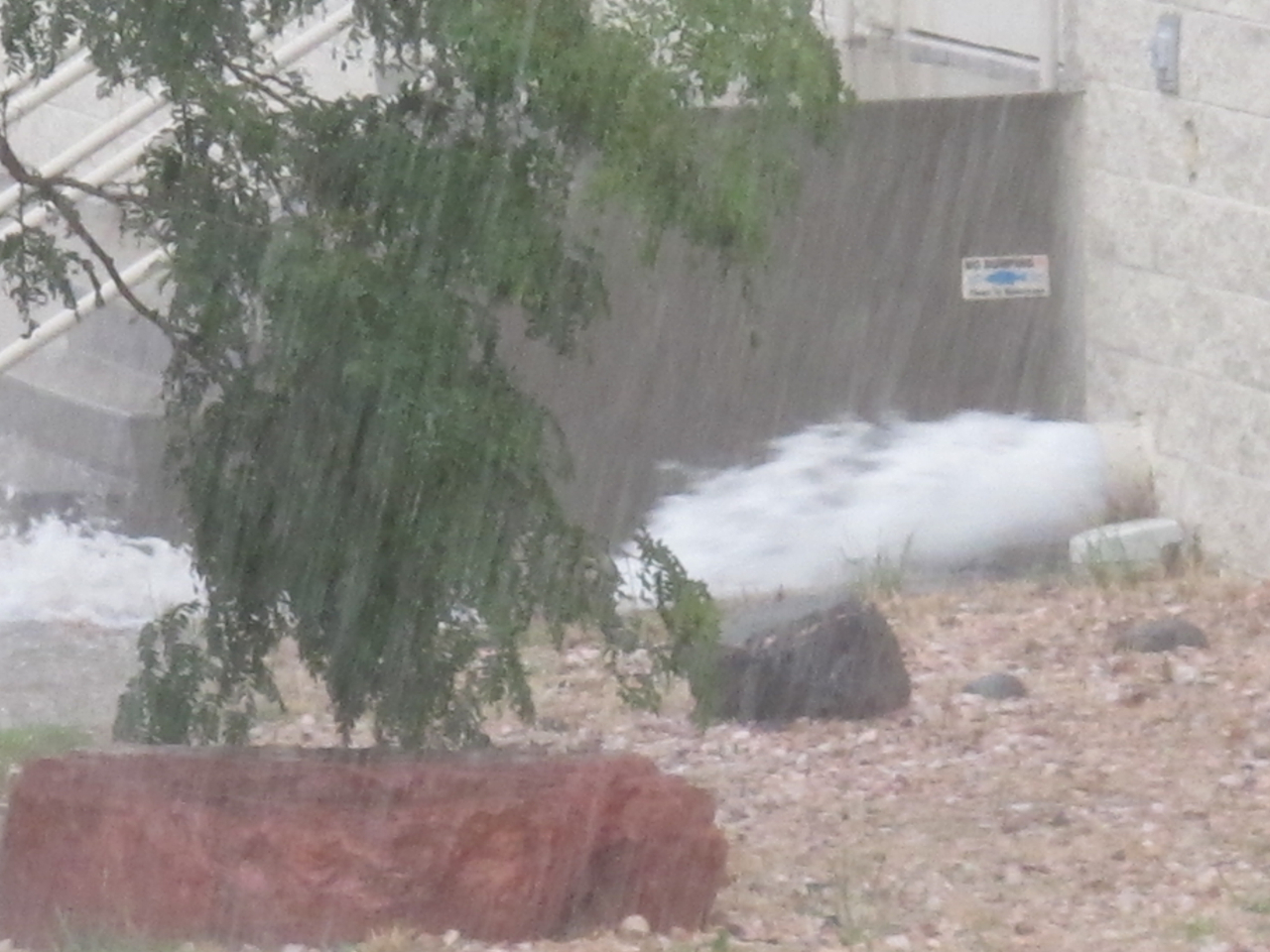 A torrent of rain gushing from the roof of the grocery store across the creek.

That may not sound like much rain, but when it comes down that fast, it doesn’t sink in unless there’s something to slow it down, like that river-rock pavement.

(Treehouse’s shed roof lacks gutters: I don’t want to concentrate the runoff from the 380-square-foot roof in one spot on my narrow, sloping lot. It’s better to disperse the runoff over a larger area; doing that successfully requires a little stream engineering—and a lot of rock.) 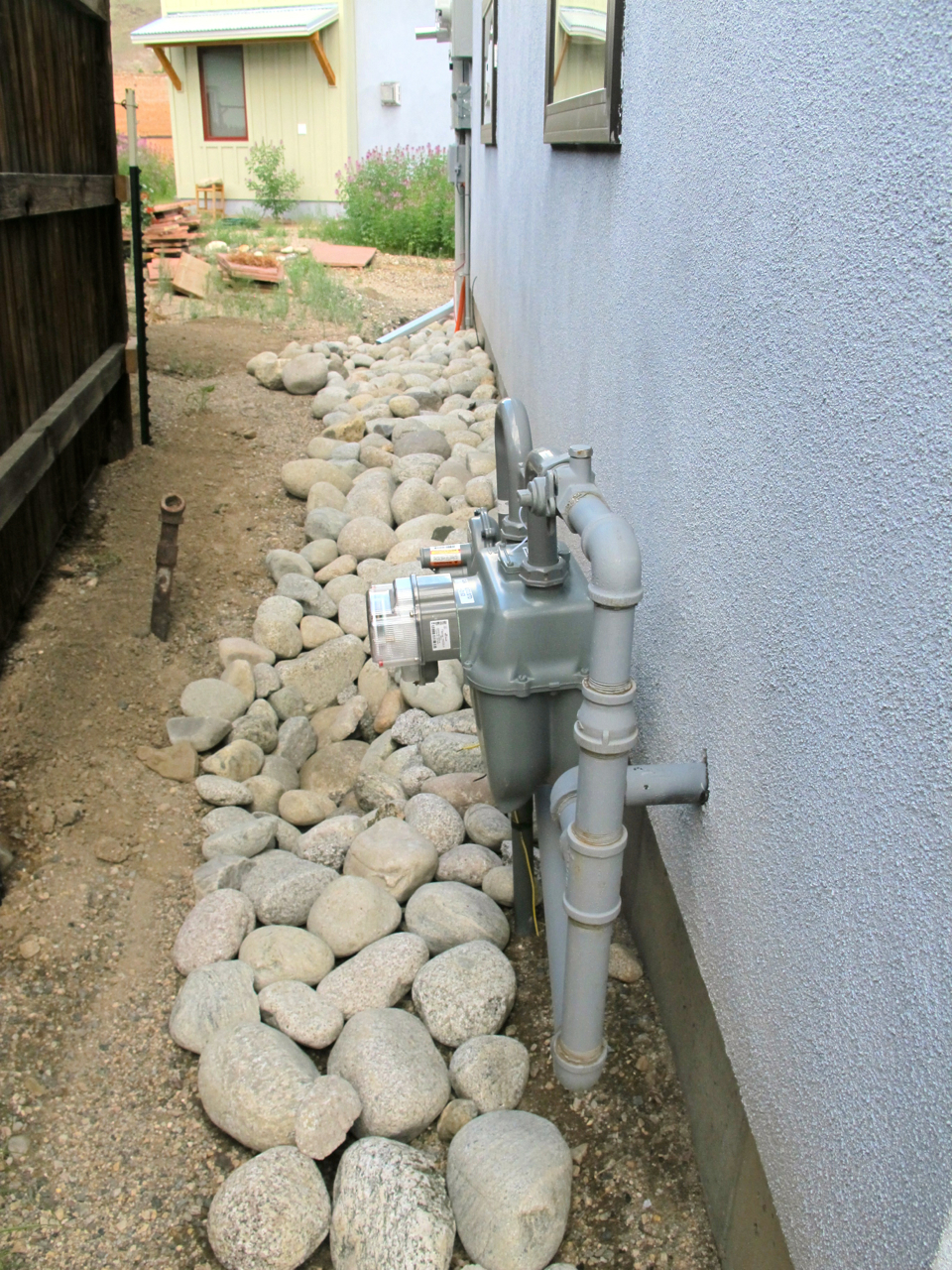 Cobbles “pave” the splash zone under the second-story roof of Treehouse, part of the dry stream  system.

Today I dug out the lower retention basin on my dry stream drainage, and moved and laid almost another ton of rock. Next weekend, I’ll work my way “downstream” on the drainage, using cobbles to line the stream bed and stabilize the banks. 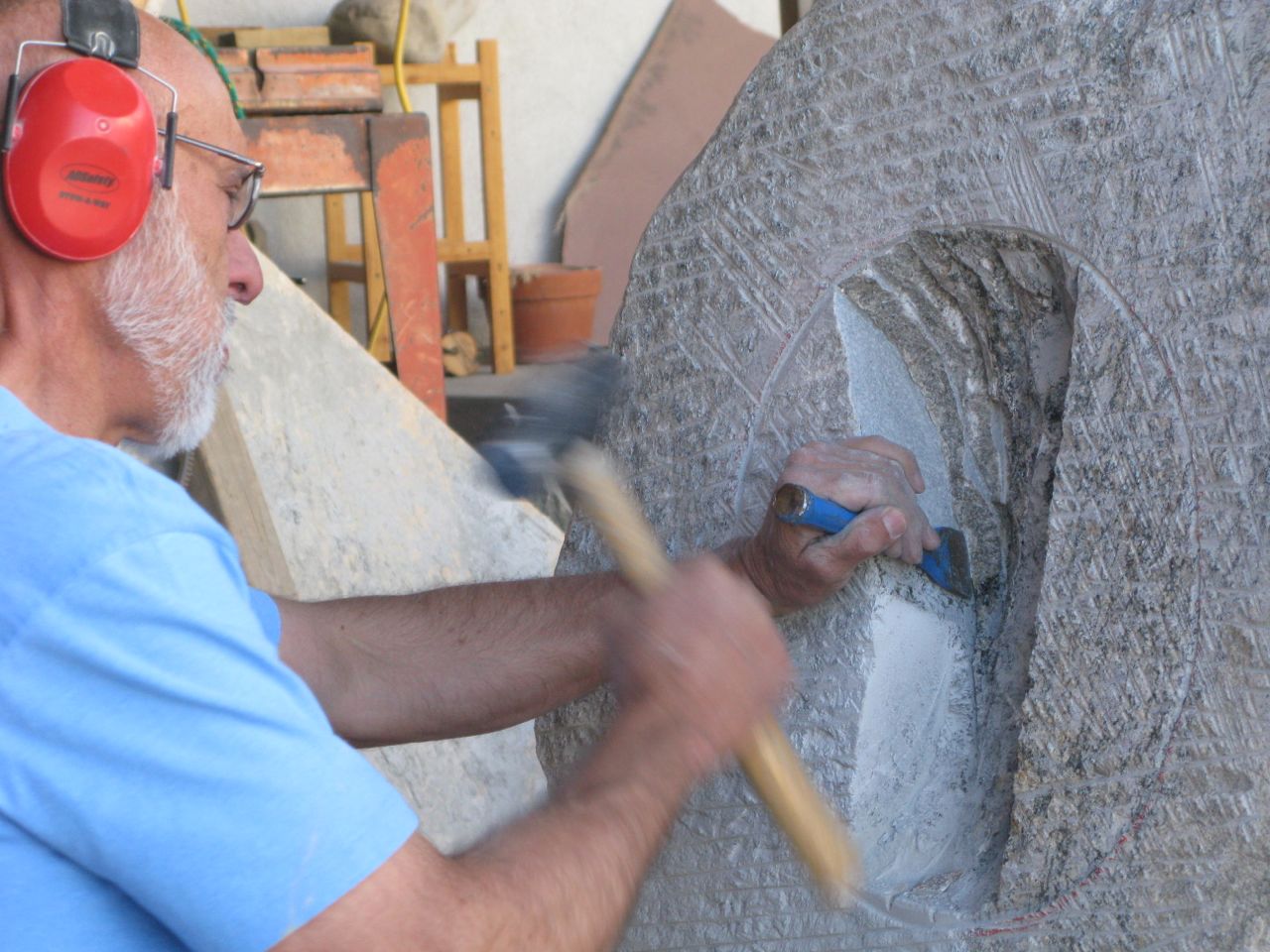 Richard chisels the excess from a one-ton granite boulder.

While soaking my sore muscles in the bath, I thought about Richard and how we shared a love of rocks, especially the hard, heavy kind like granite and related crystalline rocks.

Another thing we shared that I hadn’t realized before starting on my stream engineering project is a love of design and engineering. Only while he loved to invent tools and machines and things, I do my engineering with plants and dirt and water and rocks. 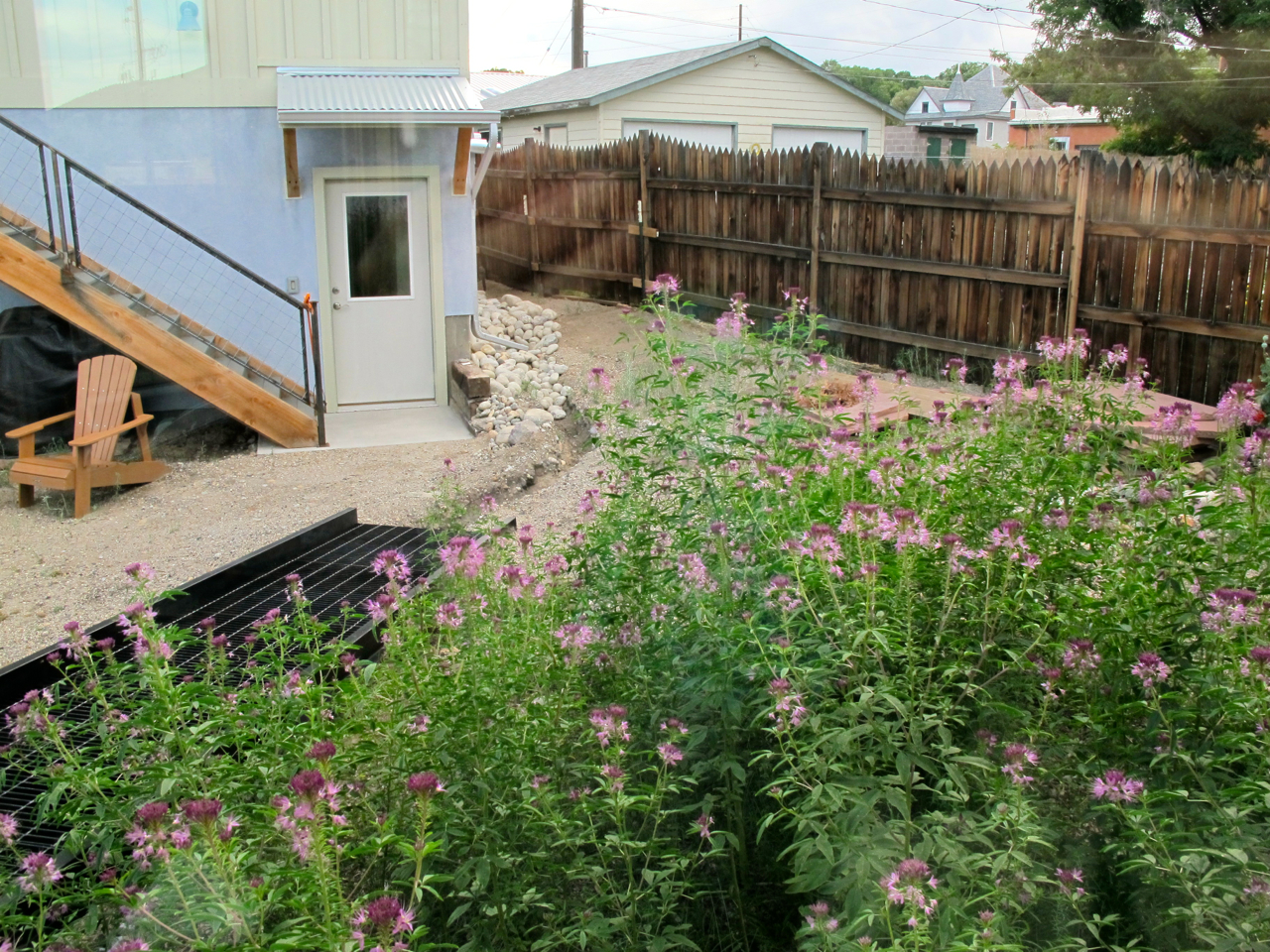 The native dryland meadow and dry stream drainage between Treehouse and Creek House.

Working with the drainage from my landscape indulges that inner fluvial engineer in a very satisfying way.

After today’s hot and sweaty but very satisfying session, I know that three tons of river rock wasn’t enough. I should have gotten two more….