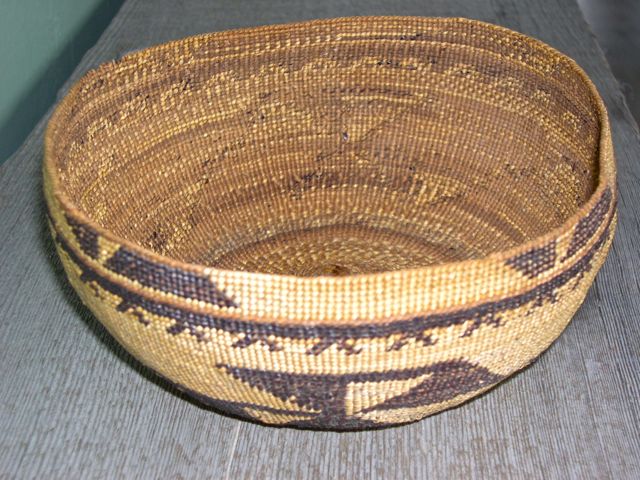 The antique Indian basket with the strangely plain inside

(Warning: This is a long post, in part because the story takes place over decades. As one of the participants in this tale said: Everything takes time.)

When I was a child, the most fascinating artifact in the treasure-trove of exotic things that my brother and I were not allowed to touch in the Spanish Mission bungalow in Berkeley where my mother grew up was a finely woven basket with intricate geometric designs on the outside, and a curiously plain inside. It was about the diameter of a person’s head, and sat in a niche in the hall leading from the parlor to the bedrooms. I would quietly sneak the basket from its niche and carry it to a sunny spot where I would simply sit with it, admiring the detailed patterns and feeling the unusual “dimple” indent in the bottom. 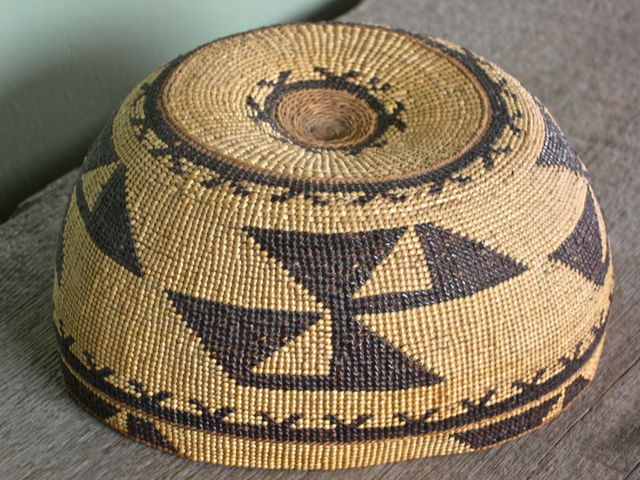 The finely woven basket upside down to show the intricately detailed bottom with its indented “dimple.”

That curious upside down basket came to me when I was in graduate school. I carried it home to Wyoming. From there, carefully packed inside my favorite set of mixing bowls, it traveled with us to West Virginia, on to Washington state, to Colorado, Iowa, New Mexico, and then finally, back to Colorado when we settled in Salida. In each place, I unpacked the basket and displayed it in a prominent spot.

I figured it was Native American, probably from a California tradition, but my mother couldn’t remember anything about it.

Eventually I showed the basket to an expert in Southwest Indian basketry and to a dealer in antique Indian artifacts. The former guessed I was right about its origin but couldn’t shed any light on which group it might come from; the latter was focused on how much money an antique Indian basket might be worth. (A lot, it turns out.) I just wanted to know its people. 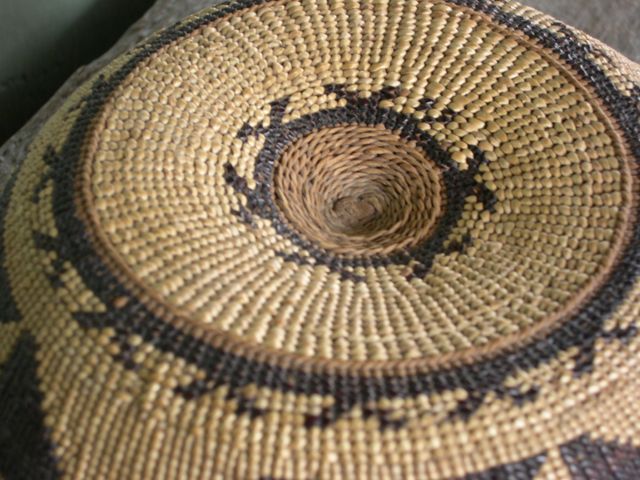 Inset “dimple” on the bottom of the basket, with the wooden button where the weaver anchored the fibers.

In one of those twists of luck or fate, I was awarded a writing residency at The Mesa Refuge in Point Reyes, California. One day I was in Point Reyes Books browsing the shelves before giving an evening reading, and found a book on California Indian Basketry. I flipped through the pages, and there was a weaver working on a basket very like mine, and wearing another–on her head!

Of course! I thought, wondering why I hadn’t figured it out sooner. That’s why the inside is so plain and why it looks more natural upside down than right side up: it’s a hat.

I bought the book, more determined than ever to find the place my basket-hat called home. Only life intervened: Richard’s dad went into hospice care in Arkansas and died the next fall; Molly was diagnosed with thyroid cancer the summer after that; we moved my parents to Denver the following year….

I thought about the basket now and then, but didn’t have time to figure out the next steps on its journey. One spring day five years ago, Richard and I were telling what we knew of its story to Grant Pound, Executive Director of Colorado Art Ranch. I told him that I felt like it was time to send it home, but I didn’t know who its people were. When I mentioned the Yurok/Hoopa weaver in the book, his eyes brightened. His sister’s partner, an anthropologist, had worked with California Indian basket-weavers.

Grant called his sister, and her partner suggested contacting the California Indian Basketweavers Association. I felt a little apprehensive about calling strangers and saying I had this basket that I didn’t know anything about, but which I would like to send “home” to its people. But my inner voice was firm: it was time. So I mustered my courage. The woman who answered the phone turned out to be a Hoopa basketweaver. She was cautious but cordial. (I probably sounded pretty flaky.) 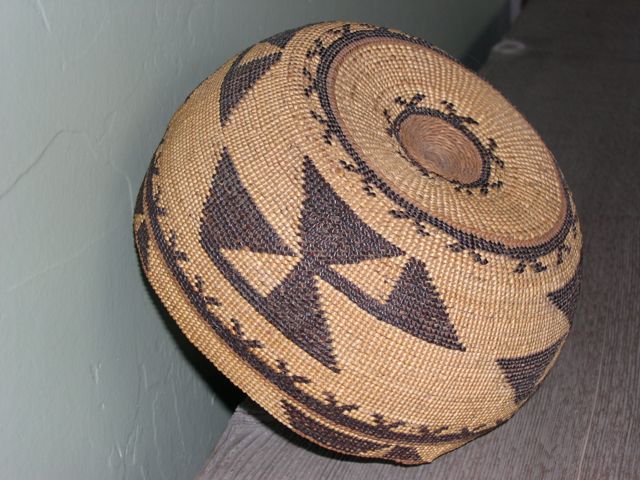 The “basket” now looking more like the ceremonial hat it is.

She offered that if I emailed her photos, she would try to figure out which tribe what I was now calling the basket-hat came from. I did, and she emailed back a few months later to say it was likely Hoopa. I asked if she had ideas about where I could send it. No response. Months later, I called again, and she gave me the names of some museums. I wrote them down, but giving it to a museum didn’t feel right. The hat needed to be in use, I felt, not in storage or on display.

While I mulled my options, life continued, and it was a while before I decided: I would give the hat directly to a Native weaver, preferably one who was both practicing and teaching. But who? The weaver who I had been in contact with seemed a perfect fit. If she didn’t want it, I thought, perhaps she’d know who might.

I contacted her again. A year or more had passed, but she remembered me. When she realized I didn’t want to sell the hat, she said she would be honored to have it. I asked only that she use it in whatever way seemed appropriate. And that she send me a photo sometime.

I packed the hat carefully, insured it, and shipped it off to Hoopa. (“You gave it away?” said the dealer I had talked to. “You might as well have burned money!”) 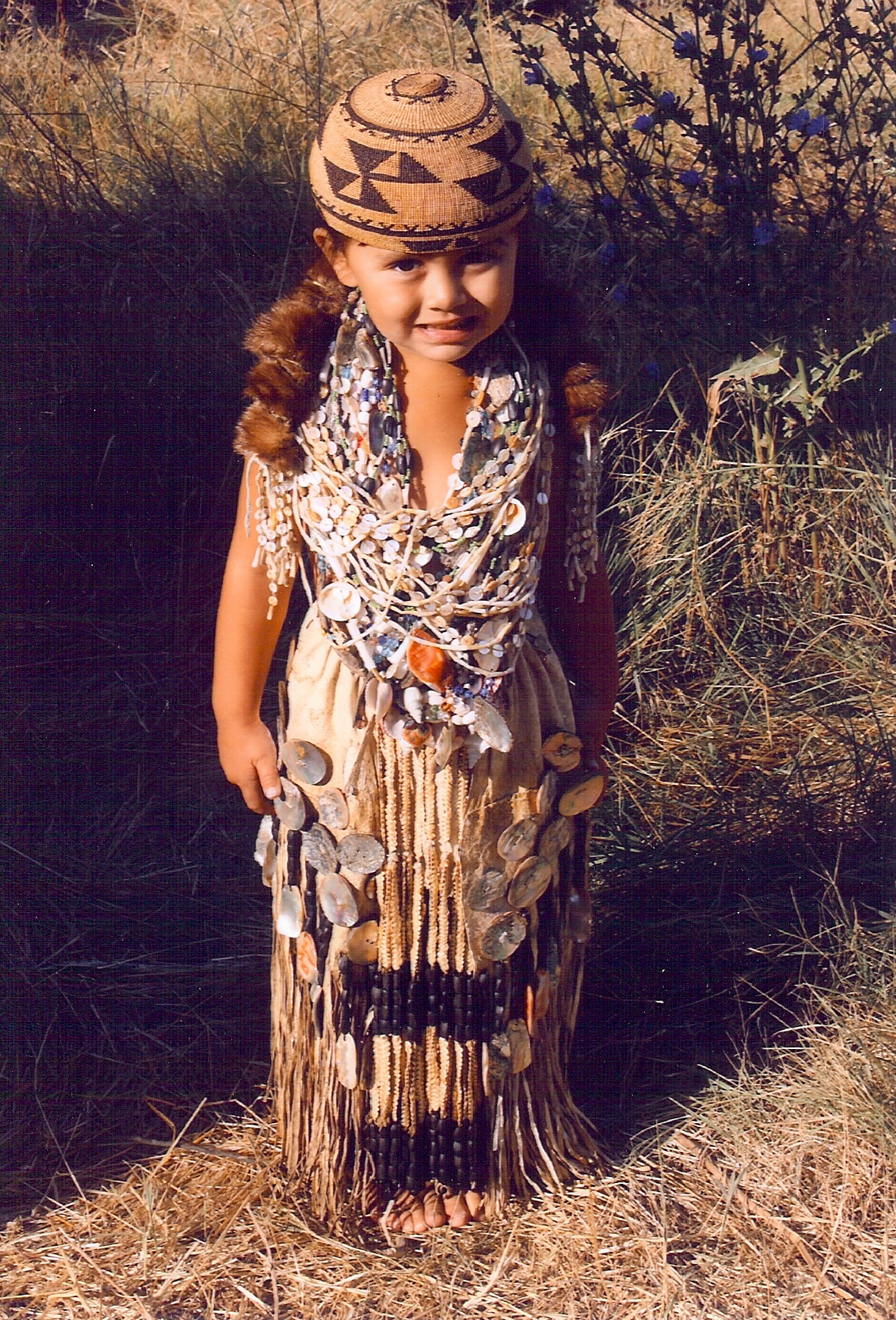 Deanna James participating in a Hoopa healing ceremony for a child, wearing the basket-hat.

Months later, I got an envelope in the mail containing a thank-you letter from Deborah McConnell, the weaver I had sent the hat to, along with a photo. The girl in the picture was her niece, Deanna James, said Deborah, and she was wearing the hat as she took part in her first healing dance, for a sick child.

Tears filled my eyes. The basket I had so loved as a child was back at home doing what it was meant to do: participate in the life of a culture and its people. “Seeing the hat take its place at home is worth a lot more than money,” Richard commented when he saw the photo.

That was two years ago. I imagined telling this story then, but life intervened again, most particularly in our journey with Richard’s brain cancer.

A few months ago, when I finally wrote Deborah to ask  permission to tell this story, and to use Deanna’s photograph and their names, she wrote back:

It is okay to use our names and the photograph of Deanna for your blog…. Perhaps your efforts will help people understand that the baskets are an important aspect of our culture and continue to be used today. I am once again teaching basket weaving and it feels good. Everything just takes time.

Everything does take time. Sometimes that time is exactly what is needed to complete the circle, bringing the healing home.