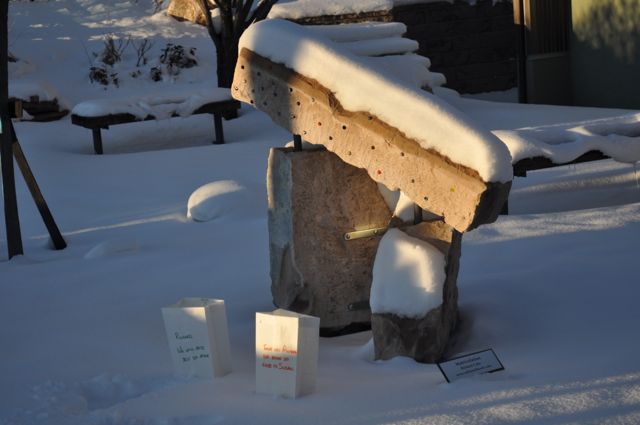 Friday afternoon, two days after winter solstice, a crowd of 300 or so joined us in Salida’s Steamplant Events Center despite purely horrible weather–eight inches of new snow and a low of 18 degrees below zero that dawn–to celebrate the life of my love, Richard Cabe, in “Buddhist-Quaker” fashion.

Which simply meant with a great deal of love, some stories, time for silent meditation, and some sharing of words from reflective silence. No dogma or formality, just a community coming together to honor a life well-lived and well-loved.

As people greeted each other, got a drink and food from the incredible spread (thank you, Roberta Smith, Ploughboy Local Market, Salida Bread Company, Amicas Pizza & Microbrewery, and the rest of the food committee!), Molly and harpist Carol Ley played some of Richard’s favorite pieces. 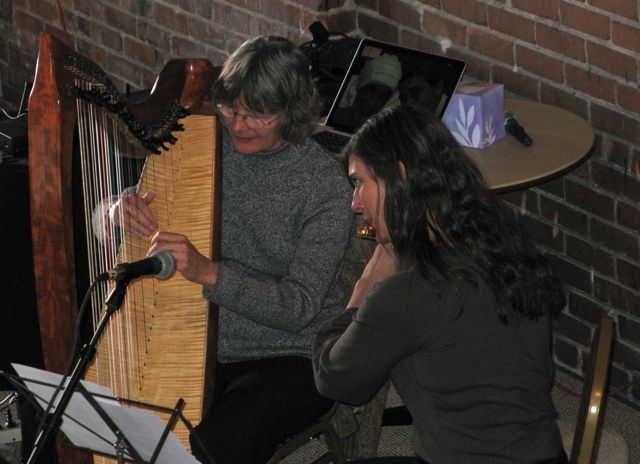 A slide show of photos I had scanned projected overhead, giving a sense of Richard’s life, travels, and sculpture, and proving that his bright spirit–and that characteristic smile–were part of him from the beginning.

After time to settle in, we turned hearts and spirits to remembering the man. Molly led off with words about what she had learned from her Dad, followed by my brother, Bill, speaking for the Tweit clan, and then Richard’s eldest brother, Ron, speaking for the Cabes. I came last, and was proud of myself for managing to say my piece without using up an entire box of tissues. (Thanks to friends Doris and Bill for supplying tissue boxes for each table!)

At the ringing of a handbell, we settled into ten minutes of meditative silence.

After the bell rang again, attendees stood as they were moved to speak about Richard. We heard poems, stories, and recollections of his smile, his rich and wide-ranging intellect, his deep spirituality, his kindness and sparkling sense of humor.

I closed with a quote attributed to Sojourner Truth:

“I’m not going to die. I’m going home like a shooting star.”

We ended the celebration by writing messages to Richard on paper bags, filling each bag with a couple of scoops of sand and a candle, and taking each luminaria outside in the golden light of an early winter sunset to line the paths of the sculpture garden.

Later that night, after the gathering for family and friends in Richard’s studio, where we filled and lit another hundred-fifty or so luminarias to further spread Richard’s light, my brother and I slipped out to return to the Steamplant sculpture garden.

The paper bags with their messages of love and blessings for the extraordinary man whose mind and spirit touched so many glowed in the darkness, ringing his sculpture, “Matriculation,” with light. (Matriculation, by the way, means to be admitted to, or join a group or college. The shape of the sculpture, visible in the photo at the top of this post, alludes to a partly open gate with a tilting lintel.) 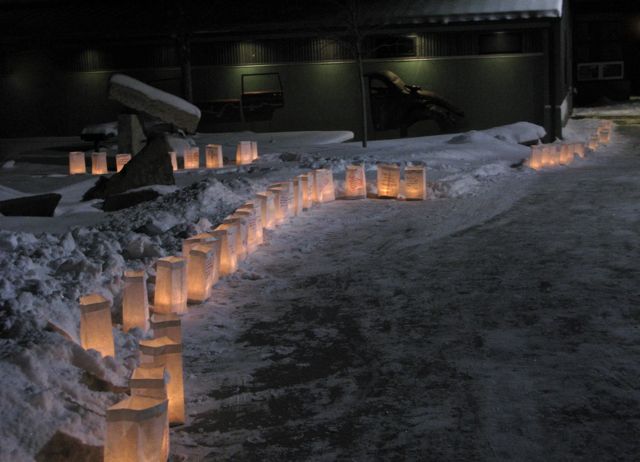 Organizing this celebration has consumed a lot of my time and creative energy for the past weeks; we even talked about it before he died. I had a lot of help, which I deeply appreciate–it really does take a community to make an event like this happen well. Still, the details were mine–and the effort and timing necessary to make sure they were accomplished have cost me quite a few hours of sleep in my “worry time” between four a.m. and dawn.

After I shot a few photos on Friday night, Bill and I turned back toward home, family and friends–and warm beds. 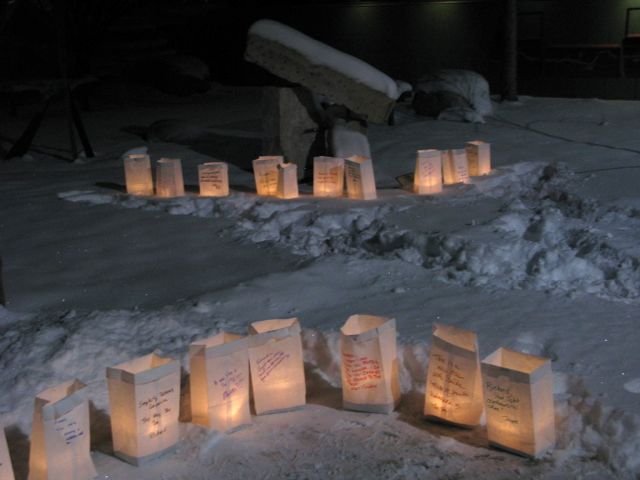 Much later, I woke and padded outside in the bitter cold to admire the luminarias. I stood outside for as long as I could, shivering as I opened my heart to my love on his journey. Just as I turned to go in, a shooting star sped across the heavens.

Richard, I thought, lighting the way for us all…